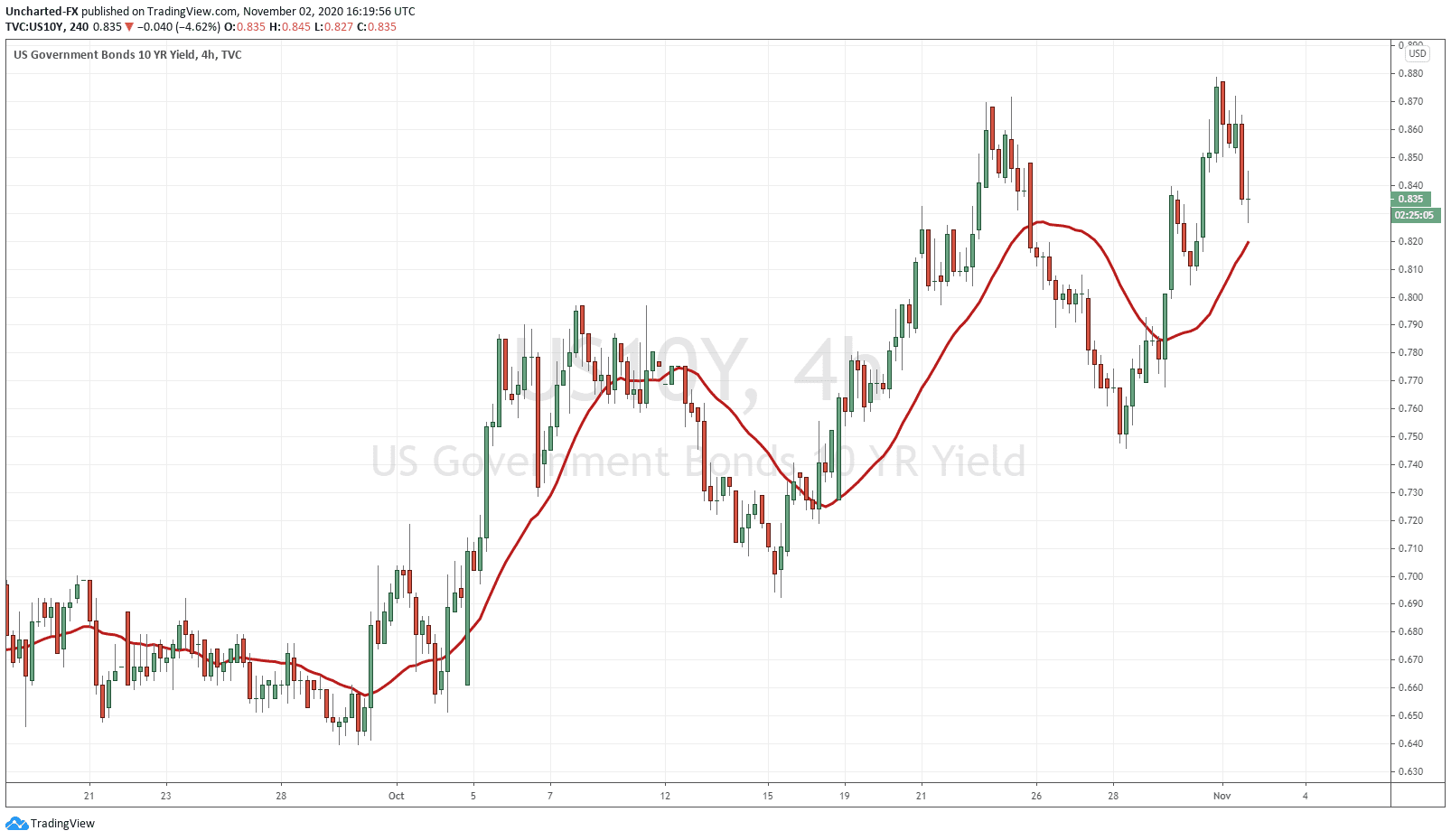 And so it begins. The week we have all been waiting for…and some have dreaded.

Yes, we do have the US election tomorrow, and I will discuss more about that tomorrow because there are THREE scenario’s which we need to watch for.

On the market front, Stock Markets continue to hold our major support. The support which is standing between us and the cuckening (bear trend and a possible new bear market). Oil continues to be on our radar as I outlined on Thursday’s Market Moment post. It has been weighing in on the markets. We had a bit of a scare last night because the Oil markets opened down over -4%. I was expecting this to weigh in heavily on the markets this morning. Much to my surprise, when I got up, Oil had recovered spectacularly back into positive territory, and the risk of it closing below its major support has lessened…for now.

European Stock Markets also with some nice gains in their trading with over 1% gains, however the China 50 remained weak in Asian trading hours. I bring this up because since those markets open before US stock markets, they can give us a hint to how US equities will perform. I tend to see the China 50 sometimes being a leading indicator for US markets rather than the European stocks.

Keeping the fact that Oil and US markets are battling at major support zones which need to hold in order to maintain a bull trend, this week becomes super important. And the US Election is not the only major event…

Following up on the election on Thursday (NOT Wednesday as usual), we have the Federal Reserve Interest Rate Decision. A double whammy where markets will be reacting on election results and then the Fed. But I will be honest, I do not expect much out of the Fed, not right after an election. Their rhetoric will continue to be the same: inflation targets remain and interest rates will remain low for much longer, oh and we have plenty of tools left in the tool box.

Finally on Friday, we have US Non-Farm Payrolls (Employment numbers) and Canadian Employment Data. US NFP used to be a big event, which saw the US Dollar react with 200 plus pip moves in less than 30 minutes. Not so much anymore when interest rates around the western world are close to zero…and recoveries seem far away. Not to mention that the Fed has said that a positive jobs report does NOT mean the economy is recovering to even consider raising rates to battle inflation from a booming economy.

So yes, a LOT of data prints and high risk events this week. As a trader, be very careful. Be patient with set ups, and know that if you do get a breakout, chances are the momentum may stall. In this type of environment, it is better to take profit quickly rather than holding them through the event risk.

Personally, I will not be making any trades until Wednesday, at least for the equity side. Once the election results are clear, and the market begins to price out uncertainty, then I will make some moves. Once again, I will cover this in tomorrow’s Market Moment, because there are 2/3 scenario’s which could result in Stock Market sell offs and volatility.

At the beginning of last week, I spoke about a risk off environment. Money managers who are following the asset allocation model of stocks and bonds are probably going to be entering bonds. They will then begin to deploy that cash into stocks once election uncertainty passes by. Well take a look at the bond market:

The 10 year is in an uptrend and hit 0.87. This is actually indicating that money was LEAVING the safety of bonds and heading either into stocks, remaining in cash, or perhaps moving into commodities. We have not really seen the fear we expected. Today is showing us something different, and very much expected. We are seeing yields sell off indicating money flowing into the safety of bonds. This is what we should expect heading into a US election.

A lot of traders out there are saying that Bonds are not seeing a pop as large as many expected because a clear cut victory in the election is already priced in. I would be careful. Not only can we not predict the election, but we cannot predict how the market would react to the result. Hence why safety plays like Bonds, and perhaps the US Dollar seem to be the safe bet. 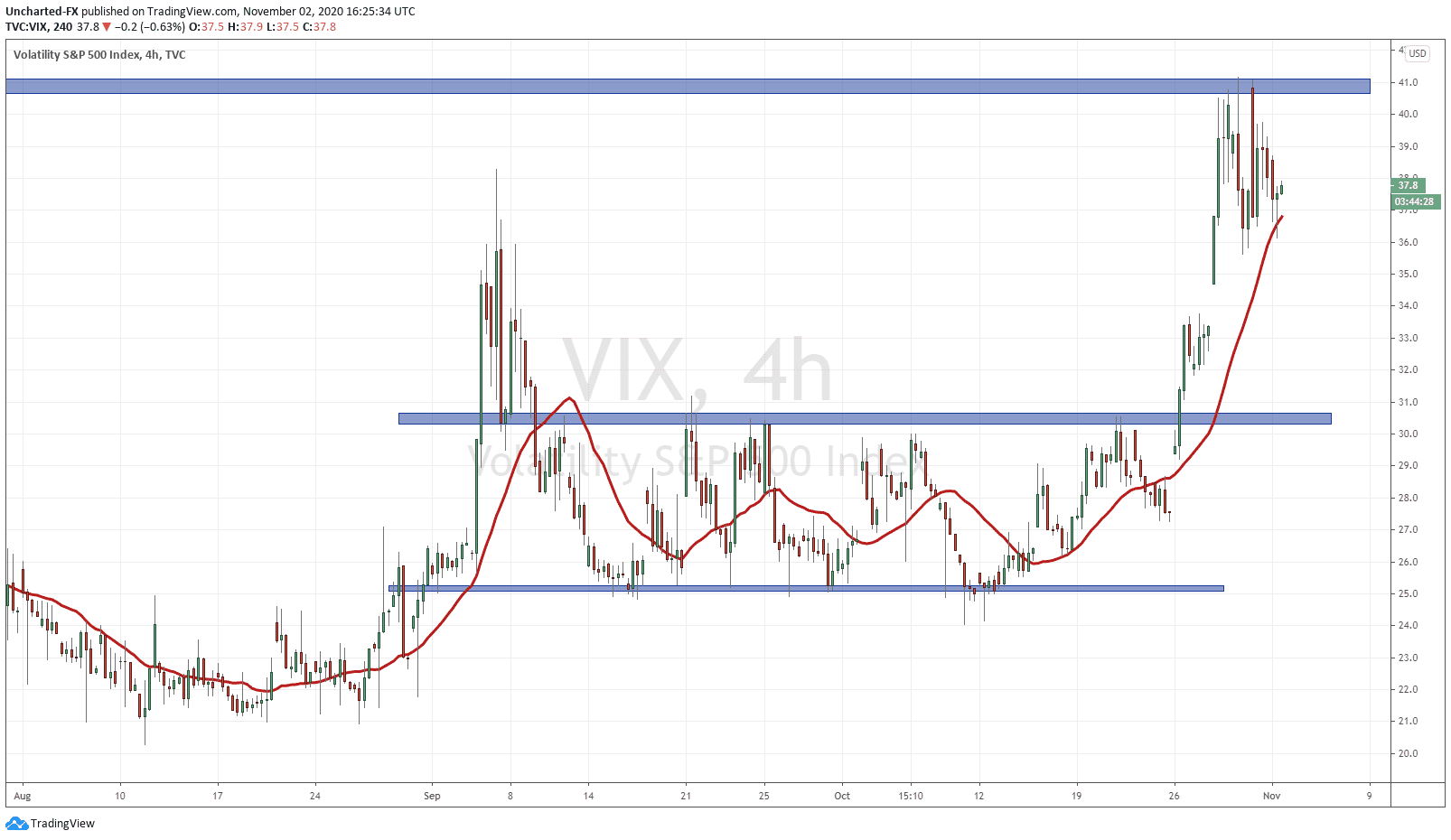 In terms of fear and uncertainty, the VIX still displays signs that it wants to continue to form our second leg. The VIX breakout has hit our target level as discussed in a Market Moment post. The risk of a move higher remains as long as the VIX stays above 36. Keep your eyes on this chart on Wednesday when election results are confirmed.

So in summary be patient here. I would not make any hasty trades. Honestly, the price action on equities are acting as I would have expected. Still holding our ranges and support zones, and I expect them to be like this until Wednesday.