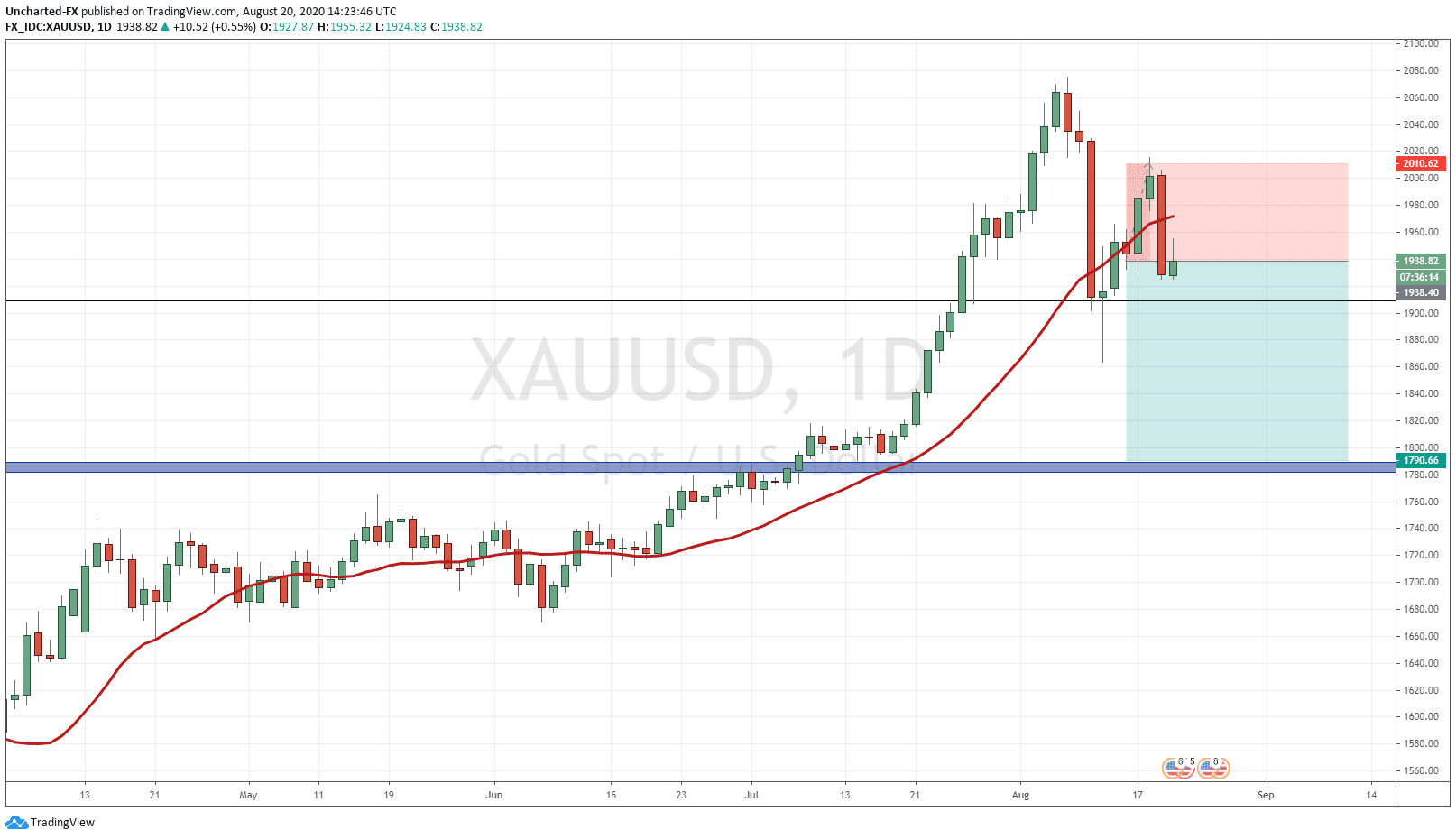 With Dalio and Buffett playing Gold in their own ways, large funds that were not looking at Gold definitely are now. There are other billionaires such as Stanley Druckenmiller and Mark Mobius who have also been bullish on Gold before the major breakout. In fact, Mark Mobius  came out saying he is bullish on Gold because:

“When interest rates are zero or near zero, then gold is an attractive medium to have because you don’t have to worry about not getting interest on your gold, and you see the gold price will rise as uncertainty in the markets are rising,”

“The safest investments are equities and precious metals such as gold. However, I would not advise buying gold or precious metals at this time until a price correction has taken place.”

This same correction sentiment has been echoed by other famous Gold Bugs.

I must agree with Mr. Mobius and the others. I do think there will be a pullback in Gold and Silver which is normal. Both charts just want to make one lower high wave correction.

For Gold, price sold off heavy after making new record highs, and found some support around the 1900 zone. From there, we attempted to bounce up higher, with 5 days of candles inching higher until we saw a large smashing red candle engulfing the gains of 3 days. To me, this top at 2000 is setting up to be a lower high. Of course, this is not confirmed until we actually break and close below 1909, but this is typical of price wanting to make a leg lower. This correction can take us to 1800. Placing our stop just above the 2000 zone, we can have a 1:2 risk vs reward trade. However, this can be adjusted by moving your stop loss a bit lower to compensate for the large red candle. 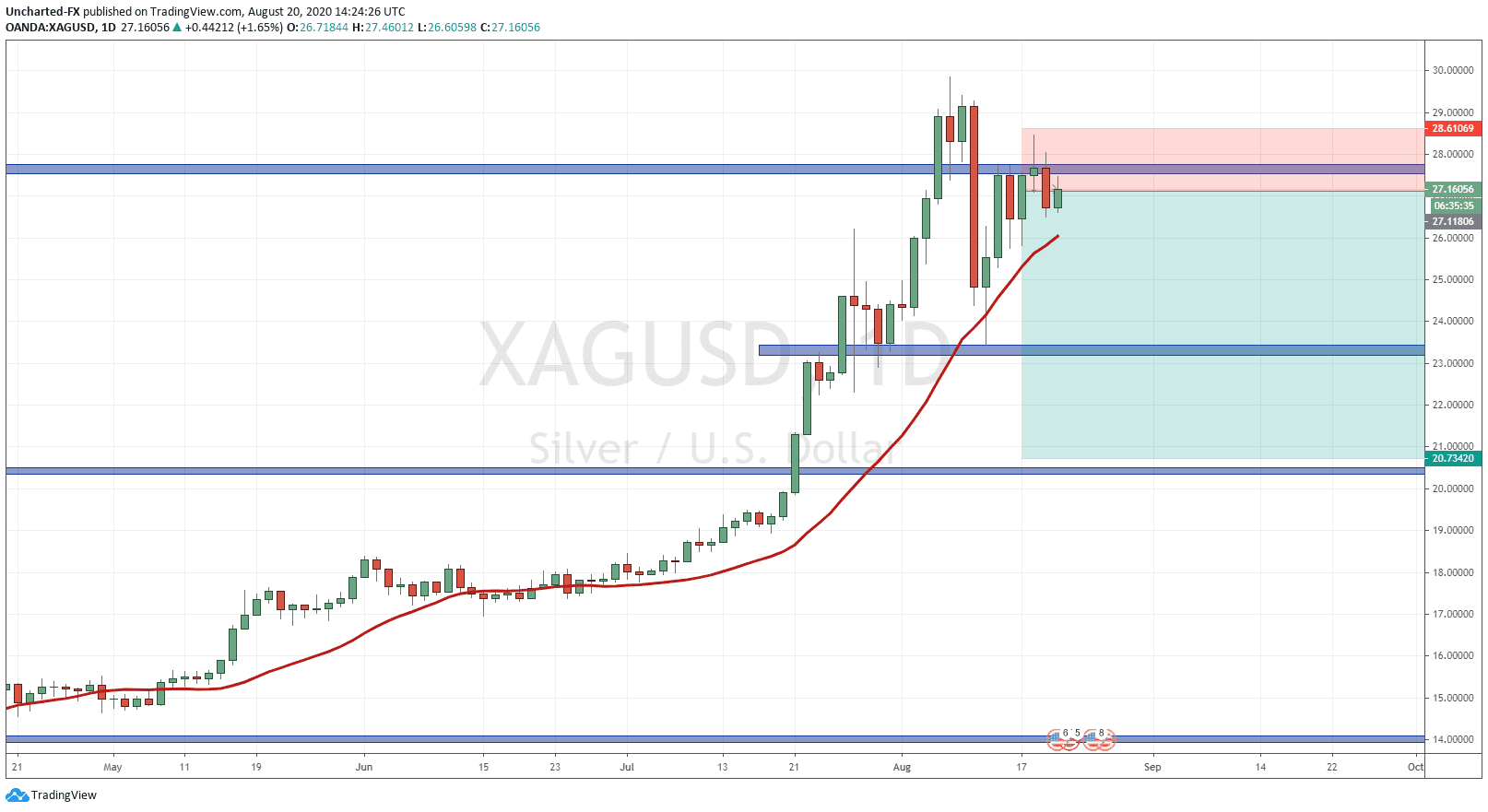 Silver is a trade that I have already taken short yesterday. I am now looking to add to my position today. Similar to the price action of Gold, Silver seems to be making a lower high here. What adds strength to this is the fact that this 27.60 zone was major support which I have discussed before. We have broken below this support and so far, have had 5 daily candles trying to break back above with some strength but with no success.

The risk vs reward on Silver is much better. Over a 1:4 risk vs reward ratio. I want to refresh your memory of the monthly chart of Silver I have posted, and can be seen here. Have been saying I would love a pullback back to 20.50…and I would still be completely bullish! This is just a retest on the longer term charts which has to happen. When Prices of Silver and Gold hit these zones, I believe it will be our final opportunity to buy these metals at these cheap prices. 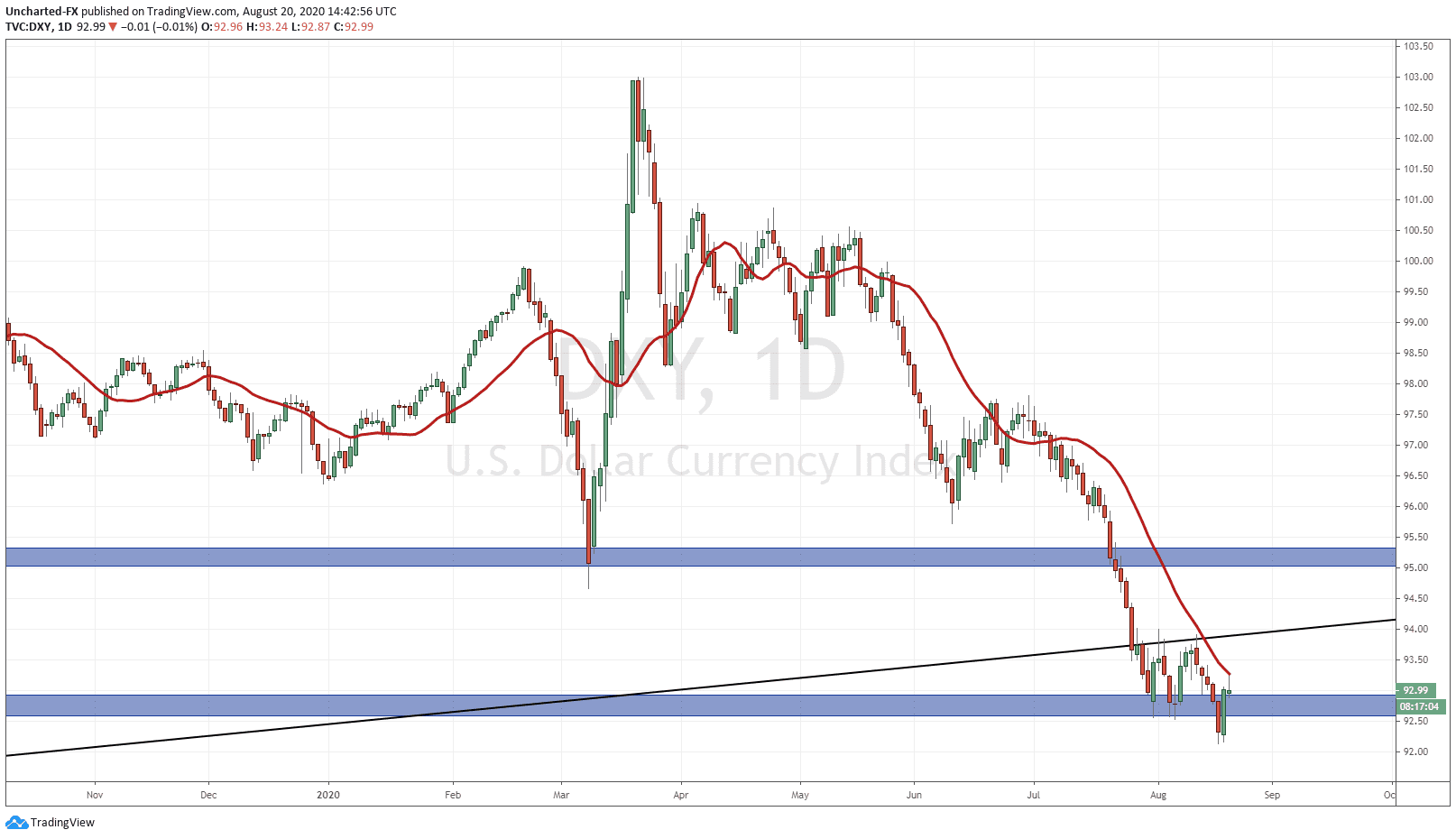 On a final note, perhaps this correction in precious metals will be occurring due to a rise in the US Dollar. It appeared the US Dollar broke down below support, but yesterday’s engulfing candle proved to be a fake out. We failed the retest of the breakdown zone. I do not necessarily think the rise in the US Dollar will be due to risk or fear…because if it were, both Gold and Silver can still catch a bid with the Dollar going up for that reason. I think the dollar can rise due to foreign money wanting to enter the US stock markets as they continue to make new highs going forward. I promised to write up a post on this topic, and I will do so next week. I think the US Dollar chart is very important here.