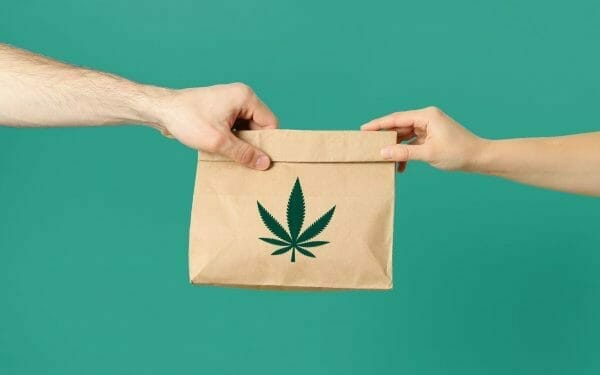 It’s time for your quarantine-inspired COVID-19 weed stock rundown, so grab a coffee and follow along because really what else do you have to do?

Unless you’re among the few and the proud to be able to work at home, or among the legions of essential workers slogging away in the trenches, you’re probably unemployed and having screamed yourself hoarse at the computer screen while you wait for the bureaucracy to give you the money you need to pay your rent. The good news is that the United States is rolling out a $2 trillion bailout for everyone and their dog effected by this virus.  Canada’s debt load: less.

But it won’t matter in the end, because as was noted in equity guru discord channel earlier this week by our mining and resources expert and resident highballer Greg Nolan, the budget deficit south of the border is at roughly $3 trillion. The bailout will provide a few months of relief and another $2 trillion will be required if this virus doesn’t back off by the summer. The Fed balance sheet is reflecting numbers that only be described as surreal, some $5.25 trillion. Contrast that with the value of all the gold on our planet for a benchmark—which is $9.5 trillion—and we have to wonder whether or not we’ll have an economy when this is all over.

So basically, we need all the companies we can get to produce the best products they can, and we also need to crush this virus and get everyone back to work. Pronto.

If you’re bummed out by all of the nasty coronavirus news going around, here are a few weed companies trying to ensure we have some resemblance of an economy when this is over.

GTEC Holdings (GTEC.V) reports that they haven’t had any cases of COVID-19 in their operation, and all four of the company’s cultivation and analytical testing facilities are still in operation. They’ve implemented measures to minimize harm to their employees and business, including segregated shifts, mandatory masks and enhanced sanitation processes in their cultivation and processing areas.

They’re continuing to produce weed, and make money. They haven’t even reported any layoffs. 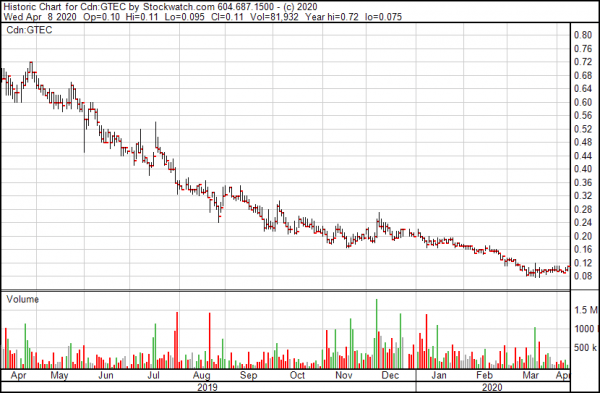 They’re up 10% on the day, which is only a penny if we’re being honest about real value, but looking at the chart and comparing it to the market – any market – any forward movement is a plus.

Nearly the end of March, Organigram (OGI.T) has temporarily laid off 400 employees, or %45 of its workforce, in a proactive attempt to help flatten the curve. Most of the layoffs were voluntary, instead of mandatory, and those that accepted made up the majority of the layoffs. These were mostly https://e4njohordzs.exactdn.com/wp-content/uploads/2021/10/tnw8sVO3j-2.pngistrative, support and other functions deemed non-essential to the business.

“These are unprecedented and trying times. Our priority right now is to make sound strategic decisions that are in the best interests of our people and which will contribute to the long-term sustainability of the company,” said Greg Engel, chief executive officer for Organigram.

Lump-sum payments will be offered to employees to help bridge the gap until their EI or other government programs kick in. The company will also absorb the employee-paid portion of health, dental and short-term disability. That’s a welcome adjustment. There are plenty of companies out there offering far less.

The name of the game in times like this is prioritize and execute. A reduction in workforce necessarily means a reduction in production, and Organigram expects that to affect their cultivation, harvest, production and packaging reductions, but also plan to supplement with what inventory that have on hand to meet demand. They’ll be focused on getting the most out of their automated and most efficient lines of production, and will place a lower priority on lower-value products requiring higher manual labour.

The launch of their Edison + PAX ERA distillate vape cartridges is still a go for Q2 2020, but they can’t give a solid due-date for the launch of their Ankr Organics line or their powdered beverage product, which was previously anticipated at the end of 2020 and Q2 2020 respectively, because of the reduced workforce. 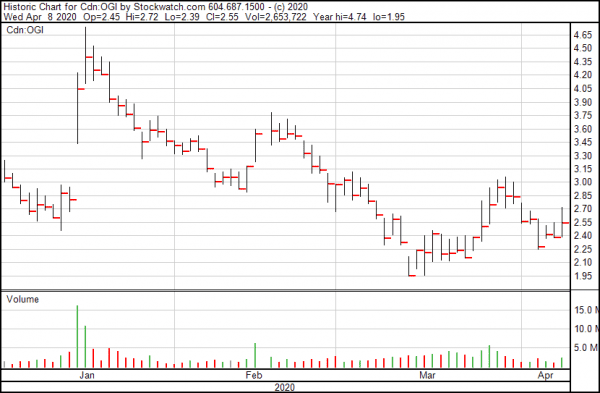 The four month chart shows some of the twists and turns this company’s taken since the ball dropped on Time’s Square, but the most important of all of these dips and rises is the one at the end. OGI is up $.16 today on what’s been a multiple day climb.

On March 19, 2020, California Governor Gavin Newsom issued the stay at home order to help tamp down the spread of COVID-19. The order also designated essential services, including food, prescriptions and weed. That’s why Fincanna Capital’s (CALI.C) subsidiary Cultivation Technologies (CTI) is still in business and continues to operate its normal extraction and manufacturing services out of their 5,200 square foot facility.

The company has since completed numerous production runs and is shipping finished products to all customers on schedule. Demand is also strong and they’re continuing to onboard new customers. It’s not surprising that demand for cannabis products remains strong across the state. When you’ve eaten all the food, played all the video games and slept all the sleep your body is going to let you, there’s not much else left but to smoke weed and get high.

There’s another point that’s gone understated throughout this time, and that’s the fact that sin-stocks—generally thought to be alcohol, cigarettes and now weed—tend to perform well during a downturn. This downturn isn’t like any other, though, but there’s no reason to suggest that they won’t continue to outperform everything else. There’s a certain amount of irony in the idea that our economy could theoretically be propped up by industries thought to be drains on society, like alcohol, cigarettes and weed.

“Although we continue to monitor the impact of COVID-19 on our business and our industry, we are encouraged by reports from our customers and their customers that demand remains strong for cannabis products in California. It has been my experience that products like alcohol, health and beauty supplies grow during recessionary times. We are excited that cannabis is being recognized as an essential service and we are proud to continue our focus on delivering high quality and cost effective products to the marketplace,” said Hank Casillas, COO and director of CTI.

Since the COVID-19 outbreak demand for weed and byproducts has remained strong across the state. A recent survey by New Frontier Data confirmed this growing demand nationally reporting that 29% of consumers reported an increase in their personal consumption as a response to COVID-19.

It also doesn’t hurt that CTI is located in California, which is expected to post a record USD$3.1 billion in licensed cannabis sales for 2019, effectively cementing its status as the largest cannabis market in the world. Sales are up 23% from an approximate $2.5 billion in 2018, according to recent analysis by Arcview Market Research and BDS Analytics. 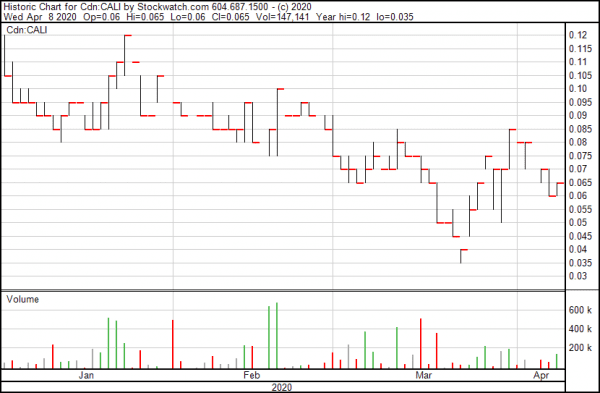 Right in the centre of March when all of this kicked off is clearly the biggest dip down to $0.4, and afterwards we have a resemblance of recovery, as the company touched $0.08 briefly and has settled in today to close at $.065.

In contrast to all of the other entries in this list, High Tide’s (HITI.C) Canna Cabana locations in Hamilton, Sudbury and Toronto were closed by midnight on Saturday, April 4, culminating in widespread layoffs for retail staff, who can now go home and join us all on the quarantine train while the company waits for the Province of Ontario to get their ass in gear.

So far, though, Doug Ford is the only premier to lay the banhammer down on cannabis shops in Canada. They have 27 other retail shops open across Alberta and Saskatchewan, and the Grasscity website has recently doubled its average weekly sales, because people under quarantine go straight to the internet to get most of the requirements for daily life. Including weed.

“To mitigate the economic headwinds being caused by the COVID-19 pandemic, we are optimizing staffing levels across the organization, working with landlords to abate or defer rent, minimizing operating expenses, and delaying capital expenditures wherever possible,” said Raj Grover, president and chief executive officer for High Tide.

Their Grasscity website has been a success and the current demand for e-commerce websites is high, and High Tide itself is on track to launch the CBDCity website in mid-April to serve customers primarily in the United States and the European Union. The company isn’t particularly worried about its core expenses during this time, either. They’re sure the credit they’ve acquired from Windsor Capital and the proceeds from their eventual sale of the common shares of Halo Labs will see them through these hard times.

These are truly strange times we live in.

The Ontario government changed their mind today, and High Tide is going isn’t closing their stores and their people aren’t laid off.

“We applaud the Ontario government for openly listening to stakeholders, swiftly amending its position and reasonably allowing retail stores to reopen and provide customers with access to legal recreational cannabis products and accessories. All three Canna Cabana locations in Ontario are ready to receive click-and-collect orders via [the Canna Cabana website] and take orders over the phone for pickup at each store, while we continue to explore the option of providing deliveries to our valued customers,”” said Grover.

Now the real question remains:  did Doug Ford have a stroke, or something? That dude never changes his mind about anything. 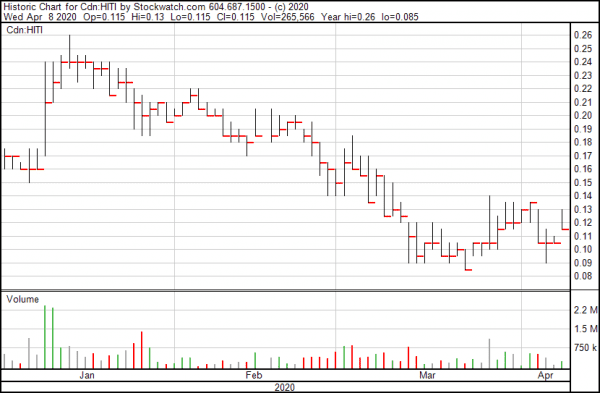 And then there’s High Tide’s chart, where you can barely see the bottom of the coronavirus dip. But it does continue with a curious trend towards recovery. Five disparate companies with five similar chart patterns still really isn’t enough to definitively say we’ve seen the bottom and sound the trumpets for a recovery period, but it is enough to indicate a pattern, a correlation and a probability.

Let’s hope it’s roses from here on out.