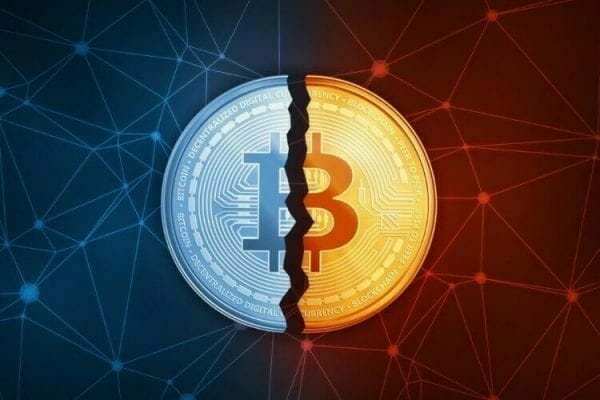 The bitcoin halving is coming and it’s anybody guess as to what companies are going to survive. The game is going to get a lot tighter next month when the risk-to-reward ratio involved in mining Bitcoin greatly favours risk.

Here are the 2019 financial numbers from Hut 8 Mining (HUT.T). Take a good look because you won’t be seeing anything like them for awhile. 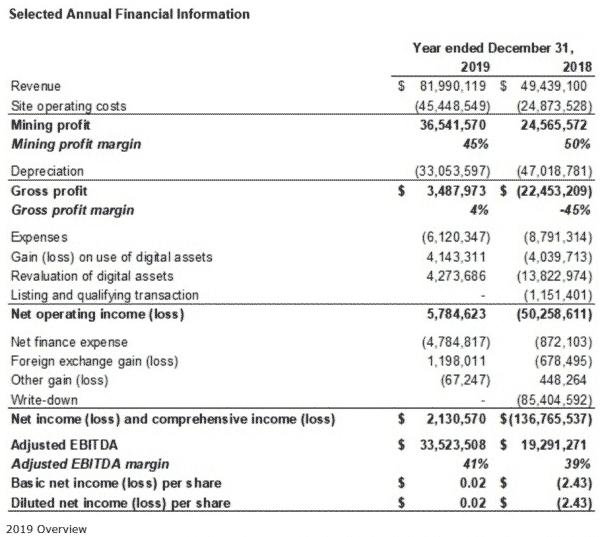 Those are excellent numbers coming out of a post-bubble market downturn, but they’re not going to last.

Hut 8 gets that, though, which is a plus:

“If the price of bitcoin and the network hashrate remain flat, Hut 8’s corresponding revenue would be cut in half subsequent to the halving. Management’s expectation is that there will be a drop in hashrate as less efficient miners shut down, consequently reducing competition. We also anticipate that the price of bitcoin will appreciate post the halving as it has in the past two halving events.”

If you just buy bitcoin from an exchange, or a pseudo-exchange like Interlapse Technologies (INLA.V) coincurve.com, then next year is going to be good to you. Barring any future unforeseen shocks like COVID-19, the price of bitcoin is going to be subject to the standard fluctuations, allowing you to build a suitable base before the supply shock from the artificial scarcity built into the system causes it to bump. Then the post bitcoin halving bumps will be worth the time you spent hodling.

If you’re someone who invests in cryptocurrency mining companies then you’re going to want to be a bit more careful and pay a lot more attention when it comes to doing your due diligence. Bitcoin mining is an expensive venture, and plenty of companies presently operating in the space aren’t going to be around next year, let alone to see the next bitcoin halving in 2024. But those that will are going to be considerably more lucrative than they are now.

Here’s what we wrote about the bitcoin halving.

At the time of writing the bitcoin halving is 39 days away. When the timer reaches zero the block reward will reduce to 6.25 bitcoins released, but the price of bitcoin won’t see any immediate change, nor will the hashrate or the electrical cost. Eventually, though, the scarcity will take over. Companies who can’t stand the heat from the reduced cost of mining versus the increased computing and operational cost will bow out, and the difficulty to close the block will reduce with it to accommodate. If the previous halvings are any indication, the price will go back up and up and up, until the strongest and most well-positioned benefit considerably from mining, but in the short term, it’s going to be a massive drain.

You’re going to want to look for three things.

Plenty of companies are going to try to cut costs by using older technology, like Bitmain’s S9 antminer. A company should be phasing these out right now and not six months from now, when they’re basically electricity-sucking paperweights that lack the computing capacity to compete. Moving up to the next-gen S17 antminer is a good low-cost, easily maintained option.

We got a dose of that with the advent of the COVID-19 pandemic, when the price of bitcoin dipped down to $6,500 and forced companies to take a good hard look at their operations. It’s unlikely that we’ll see another dip down that low, but having a more cost efficient system that can handle the occasional system shock that comes with being involved in cryptocurrency mining is becoming increasingly necessary.

This can be reduced to two different subcategories called geography and partnerships, but we won’t. First, 65% of bitcoin’s hash-rate comes from China, which means that as China goes, so does the cryptocurrency. But some companies are either leaving China, or never were in China in the first place, and they’re looking to set up in colder climates, or climates with subsidized power, or access to hydroelectric stores of power. That’s made places in Quebec, Alberta, the maritime provinces, and northern British Columbia popular with companies like Hut 8, DMG Blockchain Solutions (DMGI.V), Cryptostar (CSTR.C), and of late, Hive Blockchain Technologies (HIVE.V).

But power isn’t just for mining, either. The colder climates serve a dual purpose, and that’s keeping the ASIC rigs from overheating. It’s far cheaper to open a door and let the blowing January wind coming off the St. Lawrence cool down your server stacks than it is to pipe in air conditioning. That’s one of the many lessons that DMG has had to learn over the past two years, as they had tried their hand at setting up shop in Texas only to close and move to Christina Lake, B.C. when went bad.

Bitcoin is going to be most cryptocurrency companies bread and butter. It’s presently trading at $9,506.40 and no other coin by market cap even comes close. But as the reward is halved, and the shock from the still relatively sky-high hashrate and cost in electricity causes companies to consider their organization, they’re going to want an alternative source of revenue. Of all the four companies listed above, only Hive Blockchain has realized this point.

It’s hard to speculate on how long bitcoin mining will remain unprofitable. In the meanwhile, companies without an alternative source of income will either bow out, or will be burning through cash or bitcoin to keep the lights on. Having a good alternative coin-base like Hive with their ethereum mining operations in Sweden should be enough to perform this function. But competition is built into the system, and when the weaker companies bow out of the system, the strong will rise and profit.

Next month, the game gets real and only the strong survive.