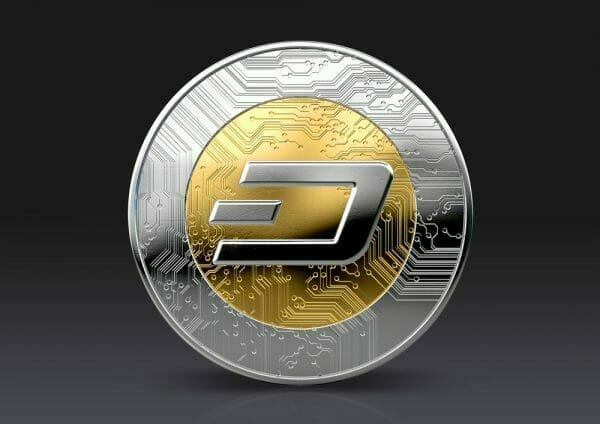 All the focus so far has been on Bitcoin’s price cratering earlier this week due to the coronavirus, and the fates of bitcoin dependent companies. Naturally, as bitcoin goes so do the altcoins, with most of the charts of the decentralized altcoins showing the same stark decline as Bitcoin. They’re nearly identical in shape with only the values changed to reflect the various cap sizes and prices, so there’s no need to post all five.

Here the chart for Dash, at rank 21, for example: 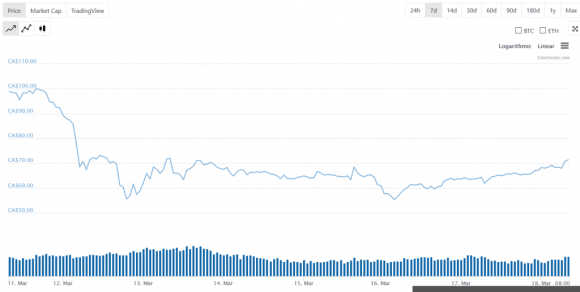 Dash’s dip is a curious one, because it isn’t a proof-of-work coin and wouldn’t necessarily be effected as harshly as the secure hash algorithm (SHA) coins that require a heavy amount of manpower and kilowatt hours. Instead, it uses the X11 algorithm, which uses a modified proof of stake consensus mechanism. Dash uses economic incentive as a starting point and instituted a system of masternodes to simplify the verification and validation of transactions.

These masternodes are full nodes with a starting stake of 1,000 DASH in their systems that can be used to pay for the services and earn a return on their investment. We wrote earlier in the week that Bitcoin’s decline came about as a result of overleveraged bitcoin miners in China unable to continue their work due to quarantines put in place by the Chinese government in the wake of the coronavirus. The subsequent decline, include Dash’s and other coins not using the proof-of-work consensus mechanism, are panic selling.

In the wake of the coronavirus, Neptune Dash Technologies (DASH.V) has issued what’s become the standard release about the measures they’re taking to protect the health of management and associates, but also to post a reminder that their crypto assets are safe in cold storage with numerous redundancies in place.

“This is a very challenging time for the general public and investors. We remain committed to providing a well-run and safe exposure vehicle. Our crypto revenues will not change during this time, and operations will be maintained in full working order from a distance to ensure the safety of our team. These are price fluctuations in a panic-driven market, and we firmly believe the rebound will be as strong as the sell-off. As such, for additional precaution, we have chosen to cut costs further and clear debt off our balance sheet through share issuances and thus preserving capital,” said Cale Moodie, Neptune’s chief executive officer.

Neptune Dash’s name is a little misleading, because they’re actually involved in the activities of two separate blockchains. The company’s primary objective is the construction and operation of masternodes on the Dash blockchain used to facilitate payment processing using the blockchain network, and also to participate in the Cosmos ATOM community through delegation of ATOM tokens. 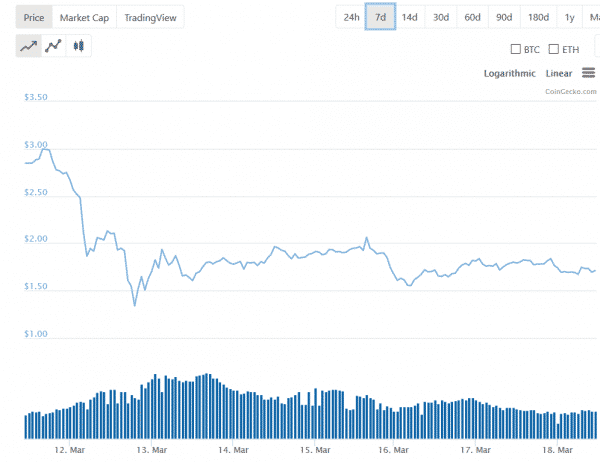 Cosmos is largely regarded as a much more accessible coin. It’s still small enough to mine from your home computer, and has enjoyed some rather interesting price fluctuations in its short life. Like Dash, it doesn’t use a proof-of-work consensus mechanism, but instead a hybrid proof-of-stake, which allows for those with the most coins to effectively control the network. The more ATOM staked, the more likely to become a validator node to validate a transaction and earn tokens, though it is also possible to delegate your tokens and receive a portion of the rewards.

If a node is found to be acting dishonestly, it’s removed immediately from the network and its ATOM balance is held for 21 days while the incidents are investigated. The staked coins are then destroyed.

This makes it a perfect fit into Neptune Dash’s pre-existing coin structure.

There are some massive downsides to be cognizant about—namely, that these two coins are virtual unknowns in terms of cryptocurrency adoption. Neptune’s big plans for using Dash as a daily currency are contradicted by its use as a privacy currency, presently in bad odour with law enforcement because of its connection to both wikileaks, and it’s shadier cousin, Monero. 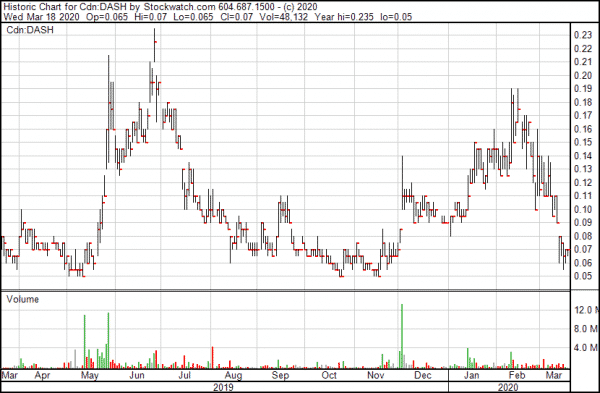 A lack of investment joined with a lack of ability to raise funds through private placements, conjoined with Neptune’s financial failures over the past few years regarding dried up warrants not being paid in full at maturity, means debt options remain as means to raise cash.

And those debts have to get paid somehow.

The company’s investment in Cosmos is interesting, if not premature. It’s maybe three or four years and a whole lot of good luck and public recognition away from being a viable, competitive altcoin. While Dash itself has suffered from negative PR when it hasn’t been outright invisible.

It leaves much to be desired.