In May 2018, Bavaguthu Raghuram Shetty (b. 1942) was honored by Forbes Middle East as a “Top Indian Leader in the Arab World.

At that time, he was founder and Chairman of NMC Health (NMHLY.OTC), the largest private healthcare provider in the United Arab Emirates (UAE) with over four million patients in 8 countries, including UAE, KSA, Oman, Spain, Italy, Denmark, Colombia and Brazil.

Today, Monday March 16, 2020, NMHLY surged 90% to $3.80 – gaining about $2 billion market cap in the first three hours of trading – despite the announcement of a new class action lawsuit against NMHLY.

According to filed statements, NMC has 2019 revenue of $2.6 billion, quarterly growth of 32%, and a healthy operating margin of 18%.

But there have long been rumours that Shetty was not sufficiently focused on the NMC’s bottom line.  In 2017 he announced an investment of $150 million to produce a film re-telling the Indian legend Mahabharata, “avoiding the divine elements of the ancient epic.”

It would have been the most expensive Indian film ever made.

But the project was “shelved due to creative differences”.

Block got famous in 2011 when he accused $6 billion Sino-Forest Corp of being a Ponzi scheme. (They said they owned a lot of trees).

Sino-Forest was nothing but a filing cabinet full of forged documents. He made the institutional analysts look stupid. It was smart and ballsy. The stock price plummeted.

Block made an undisclosed profit on his short position.

His December 2019 negative report on NMC Health catalysed a new wave of selling. 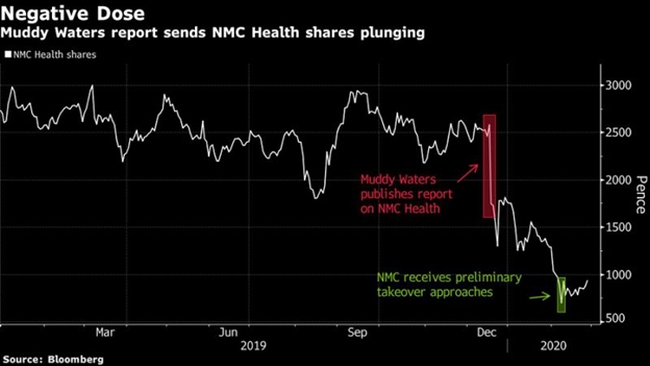 Five days ago, another law firm, Pomerantz LLP, announced that it is investigating claims that NMC’s “officers and/or directors have engaged in securities fraud.”

On January 8, 2020, NMC issued a press release which downplayed the sell-off of 31.2 million shares of NMC by two of the Company’s controlling shareholders, which caused the stock to fall 28%.

On February 18, 2020, NMC announced that a bank account controlled by B.R. Shetty had sold over 10 million shares of NMC between February 3 and February 6, 2020.

On February 24, 2020, it was announced that Shetty “had pledged 7 million of NMC’s shares as a security for debt” to Goldman Sachs.

Investors looking for reasons for today’s NMC stock price surge are advised not to hold their breath.

It is likely some version of “At-these-prices-I-have-to-buy”.

“I’ve been on the phone to a lot of brokers the last few days and every one has told me the same thing,” continued Parry, “When this ends, there’s so much money sitting in cash right now, it’s going to be ferocious when the buying starts back up.”

Last week, NMC admitted that it identified an additional $2.7 billion in debt, rounding the total debt to around $5 billion.  NMC staff were not paid last month.

“Without mistakes you can’t learn,” stated Shetty, “If I don’t have one problem in the office, it’s not a good day for me.”

Shetty is gone from NMC.

But his words proved to be prophetic.

Today NMC had a problem (a new class-action lawsuit).

It ended up being a good day for the stock. 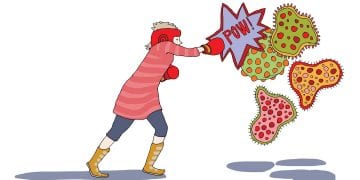