48 hours ago, the biotech company Moderna (MRNA.Q) announced that it sent a batch of coronavirus vaccine, called mRNA-1273, to the National Institute of Allergy and Infectious Diseases (NIAID).

Big Pharma companies like Johnson & Johnson (JNJ.NYSE) and GlaxoSmithKline (GSK.NYSE) are also working on vaccines, but have reported no significant milestones to date.

Owning a patent on a commercial vaccine for the coronavirus would be a valuable corporate asset.

But the announced milestone is like an unproduced screenwriter reporting that she’s sent her script to Head of Development at Sony Pictures.

The pathway to production is long, winding and full of obstacles.

Moderna knows this well because it has a pipeline of vaccines in development but has so far failed to bring one to market.

Based on the 2-day market-cap jump of MRNA, investors valued the 392-word announcement at $8.6 million/word. 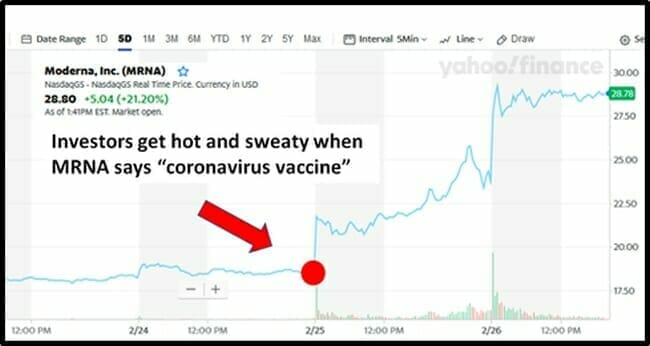 You’d think, in good conscience, MRNA might’ve educated its shareholders about the treacherous pathway to commercialization.

“mRNA-1273 is an mRNA vaccine against the novel coronavirus encoding for a prefusion stabilized form of the Spike (S) protein,” announced MRNA, “The S protein complex is necessary for membrane fusion and host cell infection.”

This is sometimes called a SKIN (Science Knowledge Is Necessary) press release.

We’ll take a wild guess that precisely NONE of the retail investors who just drove up the price of the MRNA would recognise a “stabilized form of S protein” if they met it on a beach, made sand castles with it – then took it home to play Spin-The-Bottle.

The Phase 1 study in the U.S will involve testing a vaccine on a small number of healthy humans.

NIAID Director Anthony Fauci confirmed that a clinical trial could start by the end of April, the “first step” in making a vaccine available to the public.

Fauci warned that even if the trials proceed at an “emergency speed,” a vaccine wouldn’t be available for 18 months.

But it would’ve been even better if MRNA has been forthright about the timelines.

Another red flag: MRNA padded the press release using the old WASP (We Are So Proud) strategy.

“I want to thank the entire Moderna team for their extraordinary effort in responding to this global health emergency with record speed,” stated Moderna, “This would not have been possible”…blah blah blah.

The SEC regulations do not expressly forbid a company from adding irrelevant subplots to an official press release.

If the CEO of a cobalt explorer has a pet monkey that dabbles in oil painting, there is nothing stopping him contextualizing drill results with an example of the monkey’s work.

Thanking your team “for their extraordinary effort” is the equivalent of publishing monkey art.

These people are your employees.

Take them out for tequila shots.

Don’t pad your press release with calorie-free content, that has ZERO utility to shareholders. 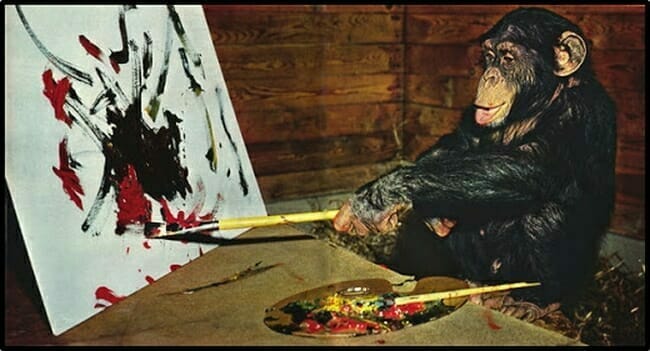 Today, Moderna reported a fourth-quarter loss of $124.2 million, or 37 cents a share, on revenue of $14 million.  Extrapolating forward yearly revenues of $56 million (4 X $14) gives Moderna a market-cap to earnings ration of 171 X.

Old fangled notions like Earnings or Profits are nowhere on the horizon.

“While the experimental vaccine developed by Moderna remains unproven, the speed at which it was created represents a breakthrough,” states hr.n1.info.

The maybe-vaccine was developed in 42 days.  By comparison, it took researchers 20 months to start human tests of the vaccine for SARS.

“Moderna has yet to produce a proven vaccine with its mRNA technology platform, which aims to make drugs that direct cells in the body to make proteins to prevent or fight disease.”

Some scientists believe the coronavirus could become “a seasonal illness similar to the common cold or the flu.”

If the coronavirus hangs around, and MRNA’s vaccine is first to market, the 48-hour $3.4 billion market-cap bump will be justified.

If not – and you just bought MRNA shares – you’ve been had.