Defense Metals (DEFN.C) to hit the gas on marketing after three-month triple

A year ago, if you’d told me a rare earths explorer was going to be a three-bagger through tax loss season, I’d have called you a madman, taken away your belt and shoelaces, and called in Social Services to make sure you weren’t a threat to yourself and others. And yet, here we are, with not only mining taking off, but the rare earths sector starting to move upwards.

The gravity of this can not be overstated. Mining has been slow for half a decade, and rare earths got cold a few years prior to everything else falling off a cliff, to the point where the term ‘rare earths’ would often be used as a punchline in industry jokes.

“I mean, it’s been bad.. not rare earths bad, but bad nonetheless..”

That said, a long term investor not swayed by popular sentiment might have seen that situation as an opportunity, because rare earths aren’t exactly falling out of favour on the end user side.

The American Geoscience Institute says of rare-earth elements (REEs), they’re “used as components in high technology devices, including smart phones, digital cameras, computer hard disks, fluorescent and light-emitting-diode (LED) lights, flat screen televisions, computer monitors, and electronic displays.” You know, all the things we use most in our lives?

Imagine thinking that business wasn’t a good investment in this day and age.

But beyond gadgets that sit on our desks and in our pockets, rare earths also have military applications, which make them very necessary to source locally, and put them in increasing demand as the world creaks closer to war seemingly every other week.

And yet, it’s taken this long for REEs to find financial favour in the resource sector.

Some of that may have been wrapped up in the wait for someone in that sector to show something new. Defense Metals (DEFN.C) is finding a lot of rare earths in the work it’s done so far, so much so that in speaking to several mining execs at this year’s Cambridge House Vancouver Resource Investment Conference, that company was raised by others unprompted as one that ‘really has something.’

When you’re at a conference where almost every company is rising in value and you’re STILL the one they’re all talking about, that’s really worth noting.

It’s also worth noting if you’ve tripled your share price in the last three months. 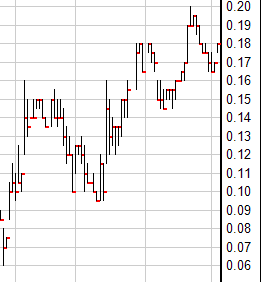 That’s a nice looking run up, the kind that usually leaves a retail investor thinking, “Oh screw it, I’ve missed this one.”

Only, maybe you haven’t.

The full picture on DEFN is this: 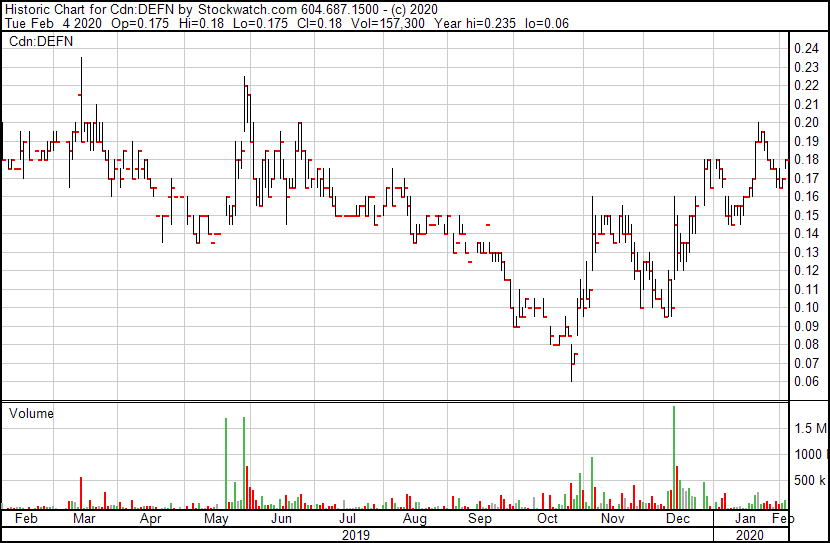 Even after the 300% rise since October, this bad boy is only back where it was mid-2019, before a long line of good drill results and positive news flow.

Added to which, the market cap of the company is an anemic $6 million, making it a long way from overvalued by even the most cynical grouch.

In October, we had a talk similar to this one, where we pointed out the company was worth as much as a decent downtown Vancouver condo. If you jumped on then, you’re welcome.

But if you’re jumping in now, you may be timing your run as well because DEFN’s most recent news release wasn’t about more drilling, or big drill results, or adding giants to the board.

It was that they’re going to engage in some market awareness programming, beyond their current deal with Equity.Guru.

In connection with the engagement, the company has entered into a master service agreement with Native Ads, dated effective Jan. 24, 2020, pursuant to which it will primarily provide services, including content development, Web development, media buying distribution and campaign reporting optimization.

Now, Native Ads is a competitor of ours, and they do things a different way to how we do, but they’re also famous (perhaps even infamous) for getting companies in front of large scale online audiences. That sort of audience usually costs a fortune, which means companies restrict their program length to a handful of days, perhaps even weeks.

Defense Metals has signed on for three months.

We can argue about the value of stock marketing programs and whether you think they bring investors or traders and whether a massive spike can be valuable or ultimately deleterious, but few investors have ever said the words, “I wish this company I’m invested in would not market themselves to other investors.”

Clearly DEFN sees they are having a moment where, despite incredible recent organic growth, their story can benefit from being brought to a wider audience.

DEFN finds themselves in a very interesting place right now because they have almost 15 million warrants out there at price levels not far above the current $0.18 share price.

Should their marketing edge them over $0.20, they could bring in $1.3 million in executed warrants. another $2.3 million could be brought in if it can get the stock price over $0.30.

If $75k in marketing can get them to either of those two levels, it will have been money very well spent.

“But!” I hear you cry, “Won’t that dilute the shareholder base!?”

Nope. Fully diluted, with all warrants and options executed, this company has only 57 million shares outstanding.

And if marketing isn’t your bag, if you’d rather just pay respect to what’s in the ground and the work being done to find that, enjoy a graphic that even the least sophisticated observer can understand: 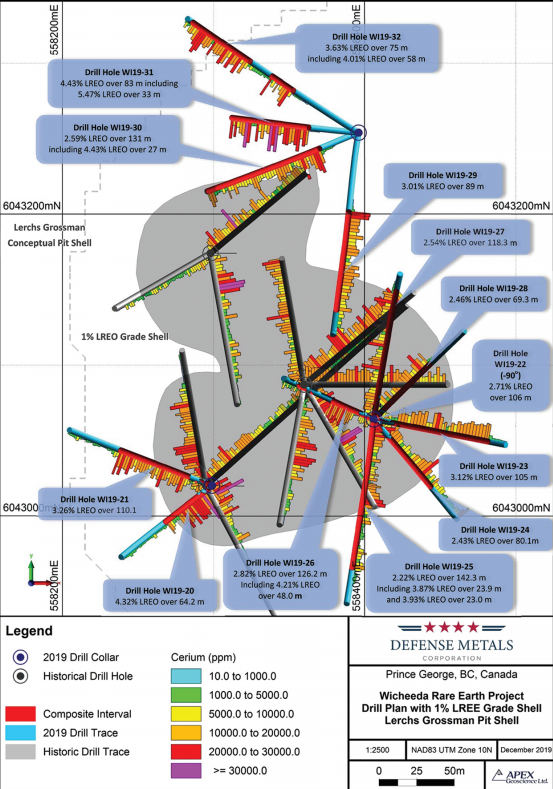 Put simply, that’s a lot of REEs. In fact, that’s a large mass of them in a size and scope that one might think is ready to be outlined in a full resource estimate, the step an explorer takes before they start mine and finance planning.

Defense Metals’ focus in 2020 will be to complete development of the Wicheeda deposit hydrometallurgical flowsheet, initiate flotation pilot plant processing of the recently collected 30-tonne bulk sample and update the Wicheeda REE deposit mineral resource based on its highly successful 2019 drill campaign.

A lot of mining explorers don’t actually do much exploring, for fear that they may ruin a good story or get to the end of their CEO salary budget before they have to. Defense Metals has been doing the work, finding the good stuff, and doing so at a time when it really matters.

Glad they’re a client. Proud to write about them. Keep it up.