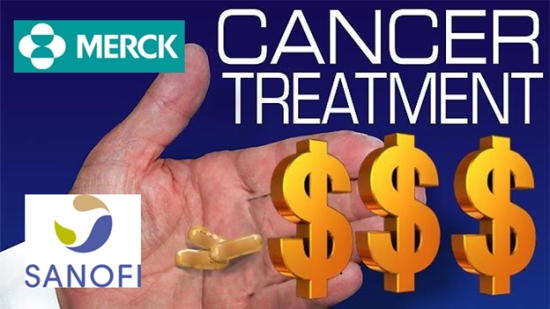 Merck is offering $20 a share for ArQule – a 200% premium to market, while Sanofi agreed to pay a 300% premium for Synthorx.

In 2018, Merck racked up $7 billion in sales from immunotherapy product Keytruda – but medical industry pundits expect Mereck to face increased competition in the next five years.

ArQule’s leading drug candidate, ARQ-531, is currently being studied in patients with a range of blood cancers.

Sanofi is casting about for new revenue streams.

It has recently lost patent protection on key diabetes products. Sanofi has discussed spinning-off its consumer health division to focus on clinical disease treatment, where revenues rose 19% in Q3, 2019.

These lofty buy-out price tags indicate that Big Pharma is desperate to restock its inventory of cancer drugs.

Money flows where it grows: the Nasdaq Biotechnology Index is up 22% year to date.

Publicly traded companies need to be incentivized to develop new drugs, but many investors (particularly millennials) are uncomfortable with the notion of using cancer patients as a primary engine of corporate profits.

Blaming Big Pharma for padding its bottom line is like blaming a dog for licking its balls.

In 1886, the U.S. Supreme Court decided that corporations were entitled to the same rights and protections enjoyed by flesh-and-blood individuals.

Through that lens, a smart Canadian documentary, The Corporation, deconstructs the DNA of corporate profiteering.

If a corporation was assessed by the same criteria used for people, its most toxic traits – disregard for ethics, lack of empathy, deception, willingness to inflict pain – would indicate the patient is a psychopath.

Big Pharma spends about $30 billion a year on direct-to-consumer ads and bribing doctors.  It also spends about $200 million on lobbying for higher drug prices to pay for Research & Development.

U.S. President Donald Trump campaigned on a promise to lower drug prices.  But there hasn’t been a lot progress.

The average price hike for those 3,400 drugs stands at 10.5%, 500% higher than inflation. About 41 drugs have boosted their prices by more than 100%, including the antidepressant Prozac — whose cost has surged 880%. 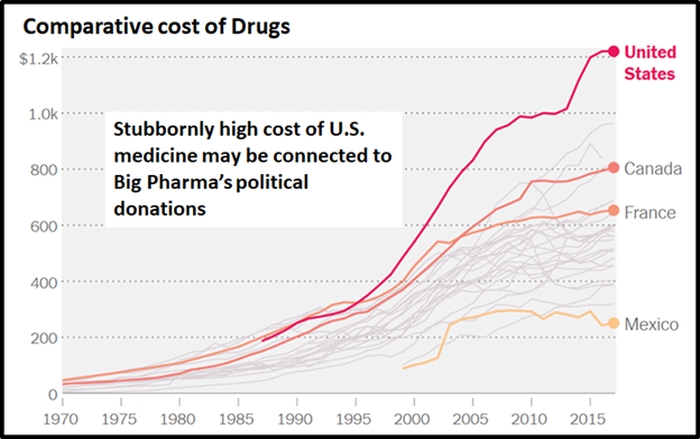 To many observers, The American Cancer Society (ACS) is a corrupt link in this chain of greed.

Though the Pap smear was originally funded by the ACS, the society quickly bailed on it, aligned itself with cancer doctors who argued the test was unreliable. For 29 years, adoption of the low-cost test was suppressed. Once introduced on a wide scale, rates of cervical cancer dropped by 40%.

The ACS raises $1 billion per year from private and corporate entities. About 60% of that money goes to pay salaries and benefits for the organization’s employees.

If the ACS actually found a cure for cancer, their bylaws state it must disband.

Another organisation in the cross-hairs of Big Pharma critics, is the U.S. Food & Drug Administration (FDA) – which has the power to approve – or deny – new cancer treatment drugs.

“There’s virtually no one the FDA has to account to,” states constitutional lawyer, Jonathan Emord, “Congress does an abysmal job of oversight.  They might hold hearings and chastise the FDA Commissioner but there is no consequence.”

The documentary film, “Cut Poison Burn” is a searing indictment of the cancer treatment industry.

“I appreciate how realistic this movie was in exposing the Cancer industry for the profit making entities that they are,” stated one on-line reviewer, “After my grandparents seen [sic] Cut Poison Burn, my grandma tells me my grandpa will no longer get chemo and she can’t stop crying over the Lil boy on the video.”

At a recent biotech conference Merck management stated that it is not looking for “mega-deals” – but is focusing on transactions under $10 billion.

“We’re not driven by the price of a deal,” stated Merck. “We look at everything. As we diversify our oncology platform, I think we’ll follow the science more than targeting specific areas of disease.”

Deconstructing that, Merck is saying, “cancer treatment is such big business, anywhere we go – we can make money.” 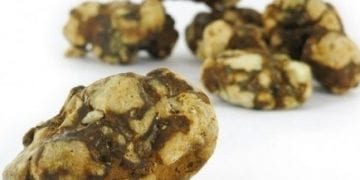