Defense Metals (DEFN.V) yanking rare earths out of the ground, markets be damned

“Resources are coming!” is the yell heard at every Howe Street watering hole lately, and has been for several months.

As cannabis bleeds out like traffic stop in Mississippi, and crypto waves its hands looking for new investors who haven’t already been bollocked by it previously, and tech endures the ongoing disaster film that is the IPO scene in the US, a lot of young investors, and smart older guys (like me) have been sitting on cash and waiting for an obvious target to appear.

I’m one of those guys who likes resources but wants to see a company actually doing the work before I’ll take one seriously.

“Oh, you flew a helicopter over some tundra and took pictures? You rolled a geologist across in an ATV? That’s nice. Drop a hole in the thing and we’ll talk.”

The reason for that is, there’s an age old theory in mining that you don’t ruin a good story by drilling it.

I go the other way. I’m not interested until you’re pulling cores out of the ground, because that eliminates 90% of the time wasters out there, who raise $500k per year to cover the CEO’s salary, the CFO’s salary, a shared office on Dunsmuir, and a girl to answer the phone and pick up chicken sandwiches – and nothing else.

So when I sat down with Defense Metals execs, I told them I didn’t want their money unless the marketing budget was lower than the drilling budget.

And here we are.

So what has that drilling found? Honestly, it’s nice. The mining-friendly crowd at CEO.CA are all over it.

Now, I know many of our readers cross their eyes at the mere mention of resources. I know, mining rapes the environment and pollutes the sea and the robots are days away from blackening the sky and taking over, but until that happens, there is money to be made digging into the earth to responsibly extract the things that are NECESSARY for solar panels, batteries, electronics, phones, laptops, military equipment, and more.

Rare earths are necessary, and they’re not called ‘rare’ for nothing.

Right now, supply on the rare earths front is contracting. China has a fair amount, but is in no mood to share, especially as the US continues to poke that nation in the chest for reasons unknown.

So if a company could find a bunch locally, that could be extracted inexpensively, that’d be an amazing thing. Because, right now, there aren’t a lot of folks in that bathtub.

Defense Metals is there, and then some.

They’re pounding out news, and the news is good.

That’s some nice numbers, but don’t miss out on the share price jump in the middle, up 50% on the drill results so far.

DEFN has a decent amount of both, it would appear.

Craig Taylor, chief executive officer and president of Defense Metals, commented: “We are extremely pleased with the results from these three additional drill holes. The 2019 Wicheeda REE deposit diamond drill hole assay results continue to yield higher-grade zones of mineralization as seen in drill holes WI19-25 and WI19-26, in addition to expansion of the REE mineralization beyond the limits of the 2019 miner resource estimate. Defence Metals continues to deliver on its stated drill program goals of increasing our confidence in the existing resource and expansion of the Wicheeda REE deposit.”

Translated: They’re drilling in places that are a little riskier but, if they show good results, mean their resource is bigger than previously known.

And those results, thus far, have been good. Five more holes are on the way.

Translated: Yes, we hit, and we hit in new places, and multiple times per drill hole.

I don’t wanna sit here and give you a mining diploma. I’m not going to talk about prehistoric eras and minerals and percentages and what you might want praseodymium for. Just understand folks want it, for reals. You probably have some in your pocket right now, keeping your Candy Crush scores updated.

So why am I talking about a mining explorer at all?

Because this one ramped up 50% in a few days of good drill numbers, and has had more since and, I expect, may have some more on the way. While you guys are out there scratching your head over whether Canopy Growth Corp will recover some of the 60% of your money it’s lost recently, this little rare earths deal is givin’ ‘er and really doesn’t give a damn whether you understand what an NI-43101 is or not. 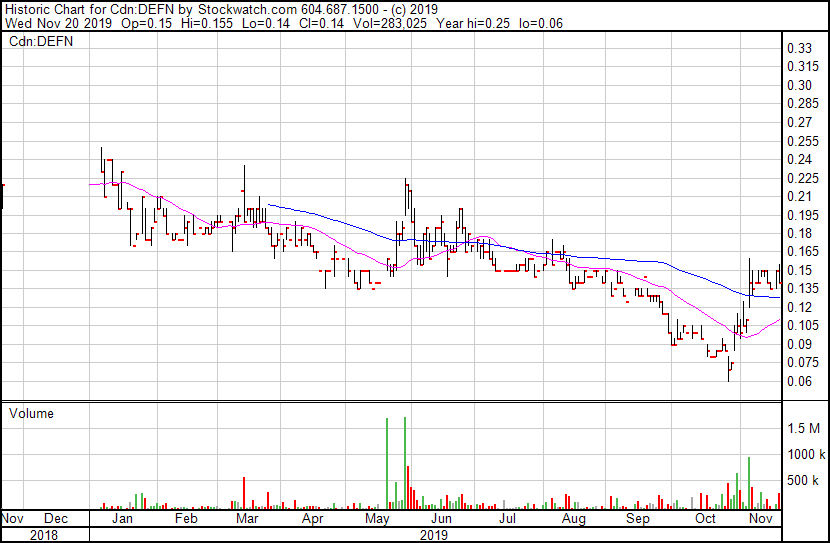 These little mining explorers can sometimes run dry of cash, which is something to consider before you buy into anything, but DEFN is sitting on $800k+ as of the last quarterlies, and with low costs other than drilling (which is paying off right now), there’s little risk the thing will run out of the coin needed to stay alive. In fact, they only recently raised $1m in June at the exact share price it’s at now.

I’m eager on this one for several reasons:

2: It’s early but they’re showing signs of intention to work, and results from that work

3. The newsflow is decent, and the share price leaning upward.

4. Trump be crazy, and if anyone goes to war, or there’s civil unrest, or China pulls up stakes and says to the US ‘get your own rare earths going forward’, the world needs DEFN to find more rare eaths quickly, and move to production ASAP.

5. If I’m an end buyer of rare earths, and I see what DEFN is doing here with a sub-$5m market cap, I’m giving them whatever they need to produce quickly, including the potential buying of their company, just to lock down future supply.

I have written about mining explorers sparingly for a few years, mostly because I feel like they aren’t what they’re advertised as more often than not. DEFN is showing me what I need to come back in, at a time when I’m looking for things to do with all that parked cannabis cash.

If you’re looking for a comfortable mining entry with room for upside and not much room for down, rare earths is a good place to start, and a worker bee like DEFN is a good spot to add to your watchlist.