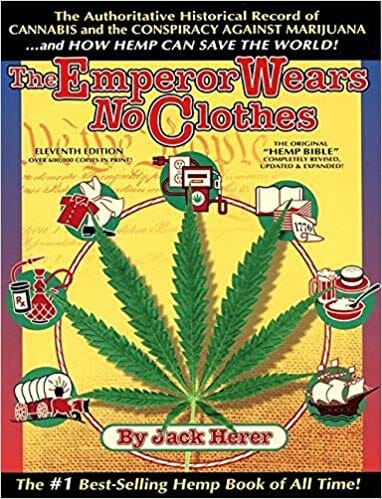 1933 Industries (TGIF.C) penned an licensing agreement between its subsidiary Alternative Medicine Association (AMA) and HH Global, so they could market and distribute The Original Jack Herer brand of cannabis products in Nevada today.

Jack Herer is a sativa-dominant hybrid cannabis strain known for its quality and potency. It’s won several awards, including the 7th High Times Cannabis Cup. It’s named after the “Emperor of Hemp,” Jack Herer, an American cannabis decriminalization activist and bestselling author of The Emperor Wears No Clothes.

“There is strong synergy between the philosophy of 1933 Industries and the legacy of The Original Jack Herer brand. We believe the partnership will be a great representation of our mutual values and desire to bring award winning cannabis products to Nevada, and the rest of the world. We believe 1933 Industries has unparalleled opportunity for expansion given their relationships, resources, and expertise, which is why we’ve selected them as our exclusive partner in Nevada,” said the CEO of the Original Jack Herer.

The synergy spoken about here is reflected in the 1933’s values. The company was founded on the values of transparency, quality, consistency, culture and respect for the cannabis plant. Its mission has been to produce consistent premium craft cannabis and natural wellness products that enable people to live their best lives.

Who was Jack Herer?

How does a card-carrying far-right Goldwater Republican who served in the military police during Korea turn into the Abbie Hoffman of cannabis?

“He started a 50-year long crusade. That crusade started in 1972 with Proposition 19, which was the first cannabis or marijuana initiative in the United States.” The measure to legalize pot failed by a wide margin. But Herer kept trying to register voters and get legal marijuana back on the ballot, year after year,” said Dan Herer, his son and founder of The Herer Group.

They were gathering petition signatures outside a federal building in Loas Angeles, when President elect Ronald Reagan’s motorcade rolled by. The questionably competent president-elect originally thought they were Canadian protesters, because he mistakenly thought the marijuana leaf on their flag was a Canadian maple leaf.

Either way, he ordered the entire bunch be arrested. A lenient judge offered the protesters a chance to pay a $5 fine for a guilty plea so the court could get back to prosecuting actual criminals, but Herer refused. Instead, he spent 30 days in federal prison, where he carried on the time honoured tradition of writing the outline for his activist manifesto in prison.

The Emperor Wears No Clothes was first published in 1985, and would go on to sell at least 700,000 copies, and has been published in as many as seven different languages.

The book was a long form historical treatise on the use of cannabis hemp from the 1600s up until the early 1900s to produce food, housing, clothing, paper, and medicine. The book also detailed how industrial hemp biomass had the potential to disrupt the petrochemical and fossil fuel industries for a more sustainable future. And of course, the book developed a fandom in the pot paradise of Amsterdam.

“There’s something about it when you smell it and consume it; the smell, the taste, the high. We think it does stand alone. If it doesn’t say the Original Jack Herer on the product, it’s just not,” said Herer.