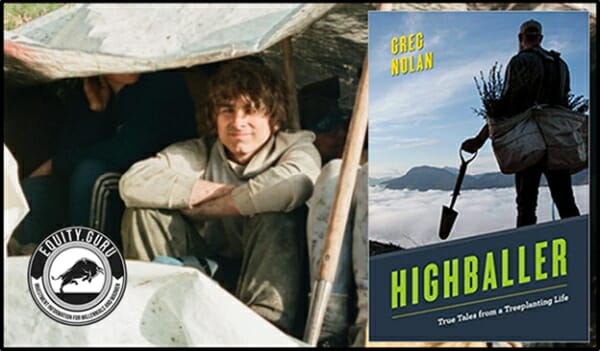 It’s exhilarating to witness a co-worker get a win.

Lots of good books get ignored.

Mr. Nolan’s book isn’t one of the them.

The media (national and local) has whipped itself into a frenzy over “Highballer”.

Vice Magazine ran an extended excerpt, “I Got High Treeplanting and Almost Shot My Cousin”.

CBC radio confirmed that “Greg Nolan has been planting seedlings in some of the most extreme conditions this country has to offer.”

TV stations call for interviews – but Nolan is camera-shy.

A bawdy, rollicking yarn – the 294-page book perfectly captures the mystical, druggie, outlaw life of a BC tree-planter.

The summer of 1987, I launched my own tree-planting career.

First morning in the clear-cut, I was conversing with a dread-locked treeplanter when she pulled down her pants and urinated on the logging road mid-sentence. No comment.  No apology.  No smirk.  She casually integrated her pee into our chat as though she was blowing her nose.

I’d been in the army, welded ships and framed houses – but treeplanting was by far the most physically challenging job I’d ever done.  My best day – on my fourth contract – I made $85.  It was a one-summer career.  I wasn’t tough enough.

One of the most memorable passages in “Highballer” describes Nolan supervising a remote treeplanting job with SFS Contracting, and then abandoning it to take care of a legal matter in Vancouver.

A short while later he read the headline: “A van carrying twelve SFS Ltd. treeplanters from the Fox Creek area of Alberta to the Prince George region of BC, flipped over and rolled multiple times, tossing out its passengers, killing seven people.”

“Something – whether is was a strong gust of wind or a driver error – caused the van to leave the road,” recalled Nolan in Highballer, “It rolled down the embankment, flipping over multiple times, throwing nearly everyone out before coming to rest at the bottom.”

“Five people died at the scene, one person died en route to the hospital, another died in the hospital later that night. Had I been there to supervise the project, this tragedy would not have befallen the crew.”

Unless you’re a war zone correspondent, or publicly criticizing a fascist dictator, the act of writing seldom carries a mortal threat.

But making a living as a story-teller often requires career-contortionism.

Nolan has combined his writing skills with deep geological and financial expertise – to become our local mining expert.

Example: in March, 2019 Nolan alerted Equity Guru investors to Black Rock Gold (BRC.V) that “holds a large, 4,537 hectare chunk of prospective terrain strategically located near the confluence of the Carlin Trend and the Northern Nevada Rift of north-central Nevada.” 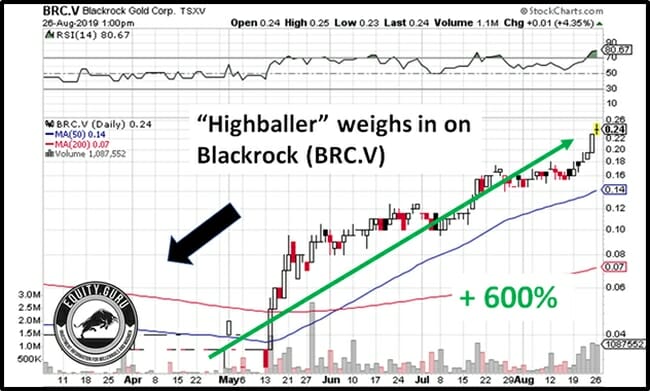 Strange coincidence: thirty years ago, I worked for Harbour Publishing (Mr. Nolan’s publisher) promoting and editing books.  The company – based in Pender Harbour, BC – is owned by legendary writer Howard White.

Back in the 1970’s, Mr. White had a piercing insight that revolutionised the local publishing industry: British Columbians will pay to read stories about British Columbia.

The last Friday of every month, our little publishing team would order pizza and stay late in the office, wading through the “Slush Pile” (hard copies of unsolicited manuscripts).

Occasionally, you’d a stumble on a gem.

Over and over again, Mr. White would ask: “Where is our great Treeplanting book?”

I volunteered to write it myself: “Lowballer – True Tales of Emasculation From a Treeplanting Dilettante.”

“It’s not the first book ever written about treeplanting and silviculture in B.C., but Greg Nolan’s Highballer: True Tales from a Treeplanting Life (Harbour $26.95) is likely the most far-reaching,” states Alan Twigg’s ABC Bookworld, “Highballer looks at the practices and people of the vital treeplanting industry through the eyes of a man who has planted 2.5 million trees. Eat your heart out, Johnny Appleseed.”

“Highballer: Tales from a Treeplanting Life” is pure gold.

Full Disclosure:  Mr. Nolan is an employee of Equity Guru.