Isodiol International (ISOL.C) trims fat and shows upward trend but is it too late?

Full disclosure: Isodiol International (ISOL.C) was previously an equity.guru marketing client and we have no issue being honest about it.

We politely told Isodiol it had some issues which needed to be addressed and we did not ask to renew our contract, though we have been watchful for any indication of potential turn in their business model.

Just sat with folks from Isodiol $ISOL – who wanted to become a client 6 months ago but we challenged them to fix their deal first.
Update: They’re working on it. Not ready for primetime yet but have laid out fixes over the next two quarters, admitted previous mistakes.
Watchlist

So when Isodiol posted their audited year-end financial statements, we had to take a look and, if there was indication of an upward trend, report back.

Firstly, here are the company-provided highlights from the press-release:

In the spirit of reading balance sheets, let’s do a little upward trend of our own and these points from the bottom up.

Compared to the same period the year prior, Isodiol decreased operating expenses by $3.2M in the year ending March 31, 2019. This is good.

I say this is good because Isodiol has, in the past, burned a lot of money on operating expenses. A lot. 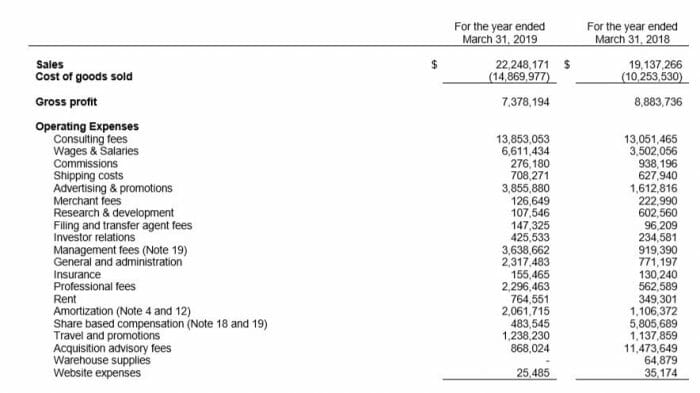 Although overall expenses have decreased, travel and promotions, $1.2M for the year as of Q1 2019, has actually increased.

Biome Grow (BIO.C), a personal favourite of mine, reported $8,654 in travel expenses for Q1 2019. And before you try and come at me for not reading the fine print, just stop: (Expressed in Canadian Dollars).

Consulting fees are also quite high, topping $13.8M for the year and up roughly $500K over the same period last year. But share-based compensation, acquisition advisory fees and commissions are down down down. A great start, but that’s all we can say.

Revenues for the year increased by 16.26% as well. Great, right direction.

To be clear: Not saying it’s fixed yet, but they appear to be honestly doing the right things to get it there. No more dilution, no more share-based comp was the challenge we laid out. Next fins will be evidence of clear up.

But it’s the divestments that really warrant explanation in our professional opinion.

Upward trend: divesting like it’s going out of style

On paper, Isodiol lost $35M due to its divestitures of Azure Bottling, Kure and BSPG Laboratories. The loss was mostly non-cash, according to Isodiol.

The company said its divestment from Kure was ” to prevent significant shareholder dilution,” and given “the current share price, the company believed that future acquisition payments of $35-million (U.S.) could not be justified given the risks associated with uncertainty surrounding the pending U.S. Food and Drug Administration (FDA) regulations on the vape industry.”

Similarly, BSPG was sold “due to the significant financial requirements needed for expansion.”

“The company sold BSPG for a sale price of $14-million (U.S.), of which $9.75-million (U.S.) has been received to date, with $4.5-million (U.S.) of such amount paid to complete the final obligation toward the original acquisition and the remainder used for general working capital.”

Isodiol says it is moving away from manufacturing and pivoting towards high-margin consumer goods, making its final divestment, that of Azure Bottling for $1M, a logical step.

On its pivot, I wish Isodiol all the best. They’ve removed the goodwill and intangible assets from their balance sheet, they’ve cut expenses (slightly) and are clearly angling for a fresh start.

But there are a few things to consider when trying to forecast the company’s odds for success going forward:

They only have $400K in the bank and total operating expenses for the year exceeded sales. Raising money might not be possible since they’ve burned through all of their share capital as well.

Don’t get me wrong, Isodiol is showing an upward trend, it’s just a little too late.