A standard processing license is needed for any facility processing over 600 kg of dried flower per year, and generally comes with a higher requirement for physical security than a microprocessor. It essentially means that the company can process and sell dried flower.

This is good for Golden Leaf because it could potentially represent the crucial first step towards finally getting off the ground after a long series of setbacks.

Equity.guru’s own Chris Parry said about as much in a July 2018 article:

“Golden Leaf Holdings spent much of the last few years fighting against law changes that, alternately, accidentally nullified their license, forced them to change their base of operations, and drove a lot of their customers to the brink of bankruptcy.”

Golden Leaf’s story begins in Portland, Oregon, where they tried to set up a facility to produce edibles and were shut down by local government, forcing them to move their entire production to Eugene, Oregon.

Simpson’s first task was a managerial rebrand, taking a company with a track record of overpromising and underproducing into survival mode. He raised funds to outfit his board with winners, such as Michael Crooke, former CEO of Patagonia, and Bob McKnight, co-founder and former CEO of Quiksilver.

Big things were afoot after the board retrofit and the company’s trajectory should have been redirected towards growth.

Then the company went back to making promises they couldn’t keep.

GLH cancelled mergers with Tahoe Hydroponics, and vertically integrated cannabis company, Terra Tech (TRTC.Q), scuttling their plans to move into California by taking over a multi-use Sweet 16 license back in January. Why? Probably because they couldn’t afford it.

The consequence? The Golden Leaf edition of CEO musical chairs continued as the company dumped Simpson for William Kulczycki.

Was it his fault? Probably not. He wasn’t there long enough to have any effect before they sacked him, but the leader’s got to take the fall.

They still can’t really afford much. Their latest financials (dropped May 30) do not tell a story about a healthy company.

How about their biological assets? $77,113 isn’t an awful lot in terms of seeds, plant, clones and everything else that makes up a successful weed business. In contrast, $25 million is an awful lot of goodwill for a company that’s hemorrhaging money. You can’t see that in this chart, though. They sneak that little tidbit in further down the page. 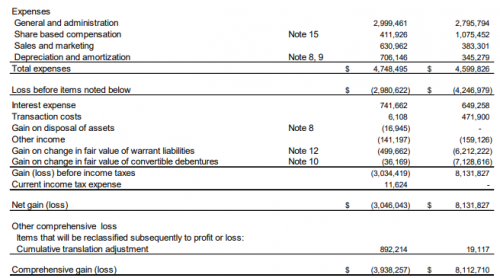 A $4 million comprehensive loss (after last year’s period of $8 million in revenue) is not what Simpson/Kulczycki wanted when they took over the reins, and then they both were out and Karyn Barsa jumped up from CFO to CEO.

Now she’s out and they appointed John Varghese.

Have you ever wanted to be a CEO? Give it a month or two, Golden Leaf might be hiring.

Don’t buy a house, though. Hell, we can’t advise renting at this rate.