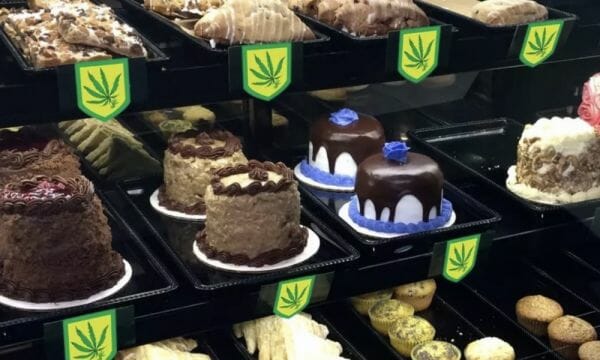 Canadian cannabis has a regulation problem.

Back when my wife was smoking on our balcony, we’d occasionally get sternly worded notices from the strata politburo reminding us that we don’t actually have control over what we do in our own home.

She ignored the letters and kept smoking.

We never really saw any consequences because she quit smoking altogether around Halloween, but we do occasionally have friends over who like to use our balcony to enjoy a Sunday afternoon toke.

So far? No letters. But we’re sure they’re coming.

You can guarantee that our situation isn’t the only one, either.

Bylaws in cities throughout Canada ban anyone from smoking in a public place, and landlords have the option to ban smoking both cigarettes and cannabis in their multi-unit apartment or condo.

It’s like the industry has traded in federal prohibition for one led by landowners and municipalities.

So what’s the solution?

There isn’t one. Not really. But by mid-December you’ll have the option to eat (or drink) your cannabis.

You’ll note that this isn’t October 17, the one-year anniversary of cannabis legalization. That’s the day Health Canada will start accepting applications from prospective cannabis edibles retailers to make and distribute products, and we can expect products on shelves 60 days after that.

Still, edibles look like a viable solution for a lot of Canadians anyway, as according to a 2018 Deloitte report, six out of 10 likely cannabis consumers (including yours truly) are expected to choose edible products over smoking cannabis flower.

Even more importantly, a report from marijuana market research company Arcview Group suggested edibles would quadruple in Canada and the U.S. by 2022, reaching a value of over $4.1-billion. Global sales, in the meantime, should rise from $9.5 billion in 2017 to $32 billion in 2022.

Here are a handful of companies getting in on the action:

Alkaline Water (WTR.V) is planning to use hemp extracts from Sproutly (SPR.C) subsidiary, Infusion Biosciences to infuse its product with CBD.

Tilray (TLRY.Q) and Anheuser-Busch (BUD.NYSE) invested $50 million each into a JV to research beverages infused with THC and CBD.

Aurora Cannabis (ACB.T) is focused on developing a supply of vape pens, edibles and concentrates, and will leave beverages for a later date when that market is better understood. That’s probably smart.

The Hill Street Beverage (BEER.V) had hoped to be rolling out their cannabis-infused beverages by now, but ran into a regulatory roadblock forcing them to build an entirely new facility.

Meanwhile, Moncton-based Organigram Holdings (OGI.V) remains optimistic that they will have edible products on shelves ready for adventure-seekers in October.

Plus Products (PLUS.C), MariMedi (MRMD.OTC) and The Tinley Beverage Company (TNY.C) have expanded their cannabis edibles operations respectively to include more states and more markets. It wouldn’t be too much of a stretch to say we may see them cross the 49th parallel sometime in the next few years, barring they can get a license.

New solutions tend to introduce new problems and cannabis edibles are no exception.

Most people into edibles have a story about their first time, and it usually goes something like this:  Nobody told me how much I should take the first time and how long it would take to kick in. So I ate too much and when nothing happened, I ate some more. Then I wanted to die when it kicked about 45 minutes later.

Joint inhalation gets you high in seconds, and keep you high for 30 to 60 minutes before the effects start to taper off. Edibles give you a much stronger body high that can last anywhere between four to six hours compared to smoking a joint, but they take longer to kick in.

“The issue isn’t that [weed is] metabolized differently, it’s that it’s gonna get metabolized to different degrees in different parts of the body, depending on the route of https://e4njohordzs.exactdn.com/wp-content/uploads/2021/10/tnw8sVO3j-2.pngistration,” Nick Jikomes, the principal research scientist at Leafly, said.

The real difference between edibles, smoking and vaping is that a larger amount of Delta-9-THC makes it to the liver where it gets converted into 11-hydroxy-THC. Not a lot is known about 11-hydroxy-THC, and much of the research is outdated and focuses only on the ability to detect it in urine samples and blood assays rather than its psychoactive properties.

“Technically, you can overdose on THC, but you can’t die from it, so it’s not like an opioid,” Jikomes said. “There’s a valid reason for concern, but we take these precautions already with lots of other things, including traditional medicines that have childproof packaging. I think this is no different.”

Colorado and Washington recommend a serving to max out at 10 milligrams of THC, and demand that the label display the total amount of THC in the product, as well as the number of servings.

Rather than provide a recommended dose like the governments of Colorado and Washington, Health Canada has instead produced regulation to try to reduce the risk of overconsumption and accidental consumption.

The restrictions are not only ineffective—as there’s nothing to stop consumers from buying multiple packages and eating them all, but harmful to the industry because the regulatory limitation of 10 mg per package is going to make it difficult for Canadian edible weedco’s to compete with their American neighbours and the black market.

California, Colorado and Washington state regulation allows a package of edible candies to contain up to 100 milligrams of THC, while Oregon’s regulations place these limits at 50 milligrams. This could easily be an avenue for the black market to fill. In contrast, black and grey-market edibles can contain anywhere from 40 to 120 mg–or more–per unit.

The 10 mg dosing limitations have environmental consequences as well.

Ten mg is a microdose, which is great for experimentation, but it’s not going to satisfy most customers looking for a Friday night thrill. These customers are going to buy five or six of these at a time. That means more packages being shunted off to the landfill.

The entirety of this legislation was carried over last October from cigarettes and slapped onto cannabis, and it’s carrying over to cannabis-edibles for the first anniversary of legalization day.

There are a handful of excellent aspects of this regulation.

The overall goal here is consumer protection, with a focus on responsible use and protecting minors.

No sleek packaging here; cannabis is expected to be as drab as cigarettes, with no visible brands and nothing that could appeal to children. Producing and shelving a cannabis-laden gummy bear could potentially cost you a million dollar fine and five years in prison.

Edible products will have to include a standard cannabis symbol, a health warning and a listing of THC or CBD content, as well as child-proof packaging.

It’s not exactly related to packaging, but edibles can’t be produced side-by-side in a factory where regular food is produced in case of accidental contamination.

Under the proposed regulations:

There’s also the upcoming federal election to consider, and a new government could develop and adopt a different set of packaging rules. The election is set for October 21, which is days after the due-date for the release of the Liberals’ packaging regulations.

Regulation has its place. Children need to be protected from accidental consumption. Adults need to be properly informed about the effects of ingesting too much edible cannabis. But ham-fisted regulation like minuscule dosage controls are a clear example of government overreach, and it will have severe detrimental effects on the way cannabis companies do business in Canada.

Do we really need that much hand-holding?

Full Disclosure: Plus Products and The Tinley Beverage Company are Equity.Guru marketing clients.