A BC-based $23 million public company in the cannabis enterprise software space is at the centre of a regulator warning issued Monday about aggressive phone sales touting the stock, which collapsed from $1.85 to $0.52 in a handful of days in March under heavy selling.

The BCSC says that was coming from a New York-based boiler room focused on vulnerable seniors.

The BCSC has recently learned that several vulnerable seniors in B.C. have been targeted by someone using high-pressure sales tactics, including daily phone calls, to encourage them to buy shares in CannaOne Technologies Inc. The caller, whose number appears on caller identification as coming from a 646 area code (New York), instructs people to buy a certain number of shares at a certain price, and tells them not to sell until they receive a follow-up phone call.

The BCSC is currently working with CannaOne to determine who is responsible for the telephone calls. The calls, which appear to have been made to people in other parts of Canada as well, took place between January and March.

CannaOne (CNNA.C) climbed from $1.05 in January to the $1.84 high with a two-month-long rise notable in its daily consistency during the period the calls were going out.

That rise precipitated a dizzying fall in early March, presumably when those hyping the stock decided to cash out of it. 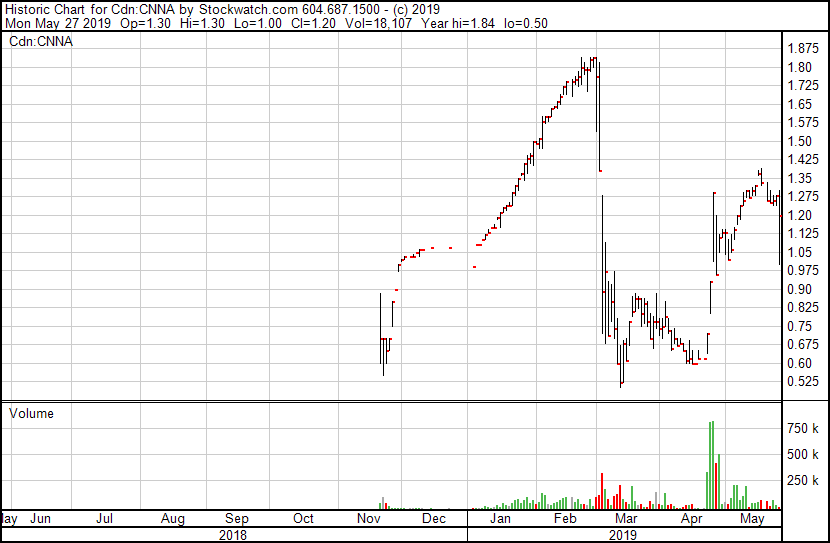 As CNNA hit historic lows, it was asked by regulators to put out a news release revealing any reason why such a drop may have occurred.

At the request of Investment Industry Regulatory Organization of Canada (IIROC), Cannaone Technologies Inc. has confirmed that the company’s management is unaware of any material change in the company’s operations that would account for the recent increase in market activity.

CannaOne has largely shaken off the events in the time since, having elected to not make public comments about the situation, even as the stock ran once again, only to run into another one day sell-off – and bounce-back – last week.

CNNA says of itself that it has a retail dispensary-driven product called Bloomkit, “the first product in the Bloom product suite, a turnkey enterprise software solution that can be utilized by any business-to-consumer cannabis company” as an online storefront.

The BCSC urges anyone who has received an unsolicited phone call about purchasing CannaOne or any other investment to contact the BCSC Inquiries line at 604-899-6854 or 1-800-373-6393. The BCSC first learned of the calls due to a complaint made to the Inquiries line.