The client list for 3 Sixty Secure (SAFE.C) keeps on rising.

Last November, 3 Sixty had 40 LPs as clients. That number grew to 60 when the company went public Jan. 8. Now the newly listed Canadian pubco has added the Ontario Cannabis Store (OCS) to its client roster.

3 Sixty Risk Solutions Ltd., which operates through its wholly owned subsidiary, 3 Sixty Secure Corp., is supporting the Ontario Cannabis Store (OCS), which focuses on providing safe and responsible access to cannabis in Ontario. 3Sixty has entered into a multiyear agreement with OCS to provide secure transport services which contribute to the safe delivery of cannabis products within the OCS distribution network.

3 Sixty announced the agreement Jan. 23 and the deal is a significant one. That’s because the OCS is the only place Ontarians can buy cannabis online. AND, once retail stores open to the public April 1, the OCS will be the only place retailers will be able to get their cannabis.

That’s right, the OCS will be securing every ounce of cannabis sold to private pot shops and the government distribution network in Ontario.

Ontario finance minister Vic Fedeli told Global News in December the government was concerned about supply and demand problems for retail shops. “In order to make sure that we don’t have issues in Ontario we are going to open our retail stores in phases,” he said.

Only 25 retail stores will open initially. But after the wheels start to roll, the number of weed shops in Ontario will quickly scale. That means a lot of cannabis will be going through the OCS – and being secured and tracked through 3 Sixty. (Canada Post will still handle OCS online sales deliveries.)

3 Sixty Risk Solutions, which operates through its wholly-owned subsidiary, 3 Sixty Secure, will focus on supporting the OCS now and—once it gets going—Ontario retail. The organizations have signed a multi-year agreement for 3 Sixty to handle the secure transport services across the entire OCS distribution network.

Gerstenecker recognized Ontario, with a population of 14 million, has Canada’s biggest market for cannabis and the one with the most growth potential. He said federal government estimates show the market could rise higher than $2 billion.

Looking at the Ontario deal as an enormous opportunity may be a significant understatement. The potential for growth as the industry matures should be north of astronomical.

Of Canada’s 144 licensed producers, 76 are in Ontario – more than half. There is no reason to believe that number will diminish as more licenses are issued. As mentioned, anyone who wants to sell cannabis in Ontario has to go through the Ontario Cannabis Store—and 3 Sixty is now in that mix.

3 Sixty has relationships with Canada’s largest LPs, we continue to grow our customer base, and our agreement with the OCS is expected to contribute to significant growth at 3 Sixty as the Ontario market develops.

3 Sixty currently transports about $250 million worth of product per month. That number will rise significantly once the OCS deal is up and running— and that’s before bricks and mortar sales hit Ontario.

The model 3 Sixty has set out for its security logistics would make any security firm envious. Have a look. It’s run like a military operation. 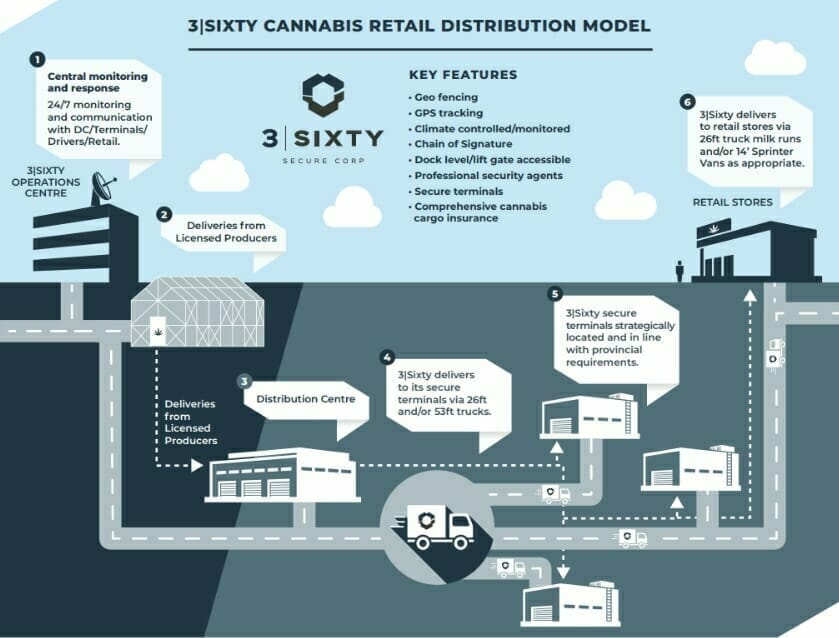 Gerstenecker said 3 Sixty is going to keep on seeking out new clients. He also said his company will be keeping its ears and eyes open for any international opportunities for expansion through “disciplined M&A opportunities to accelerate growth.”