The county, tucked into the foothills of east-central California, is steeped in mining history. It all began in the mid 19th century when miners settled the area, panning the streams for gold, chasing the rich veins underground.

Though the California Gold Rush is history, mining is still deeply entrenched in this county of some of 18,000 people.

Hecla barely scratched the surface – they left behind a substantial resource.

The resource remains open to the south, at depth, and along surface – extensions of the West, Main and East zones remain untested.

In short, there’s excellent potential to grow this deposit.

VMS deposits typically occur in clusters or pods. The extent of Blue Moon’s mineralization and alteration suggests a large system.

The infrastructure, the terrain, the locals:

The importance of good road access and infrastructure cannot be overstated – both have a profound impact on a project’s economics.

Blue Moon can be accessed via a paved highway and a five-kilometer gravel road. It doesn’t get any easier than that.

Seaport, rail, and trucking routes are all within reach (the Port of Oakland is a three-hour drive from the property).

A hydroelectric power generation facility is located only 1.6 kilometers to the north – transmission lines run right past the property.

Skilled labour and contractors, the heart of the mining industry, are applauding from the sidelines, waiting for the opportunity to ply their sweat and expertise (as mentioned earlier, the mining gene runs deep in this county).

I always like to get a feel for a project’s topography. Gently sloping terrain, as opposed to steep and forbidding, make life easier for mine builders – it’s also easier on the budget. This video gives you a sense of the lay…

This news release is all about hole BMZ-78…

Hole 78 tapped an untested area within the West and Main zones at a vertical depth of approximately 1,200 feet (374 meters).

It cut the highest grade zone ever encountered on the deposit.

For a zinc sulphide zone, these are bonanza grades, with very decent copper, gold and silver values.

Hole 78 confirms the presence of thick and steeply plunging massive sulphide mineralization within the Main zone.

Also of significance, step-out hole BMZ-75 hit mineralization 200 feet (61 meters) up plunge and to the north of the historical workings. 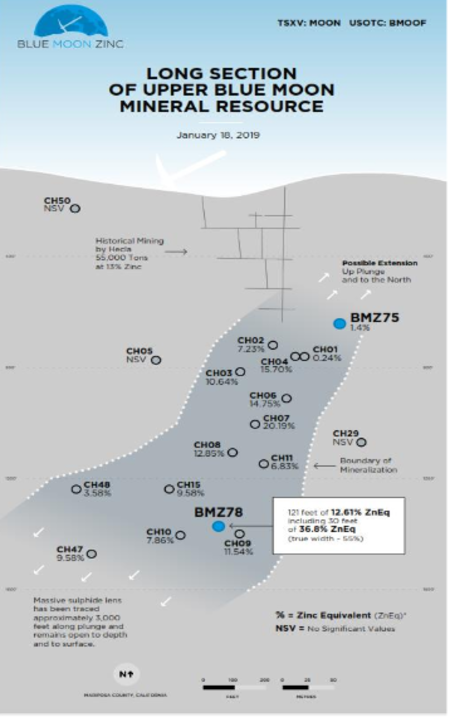 All in all, this 2018 drilling campaign succeeded in unlocking Blue Moon’s latent potential – mineralization can now be traced over 3,000 feet (900 meters) where it’s open at depth and along surface.

Given the significance of the results, the first drilling at Blue Moon in nearly 30 years, a Phase 2 follow-up drill program is planned to commence shortly in an attempt to expand the highest-grade zone ever encountered at the deposit.

Regarding the significance of these results, Patrick McGrath, Blue Moon’s CEO stated:

“Drill hole BMZ-78 is a major breakthrough at this zinc-rich VMS deposit, supporting the continuity of the system while also demonstrating the presence of a very high-grade zinc core with impressive copper and precious metal content. Gold values of 4.98 g/t and 5.00 g/t, respectively, over five feet and silver values of 130 g/t over three feet are present within the massive sulphides.” 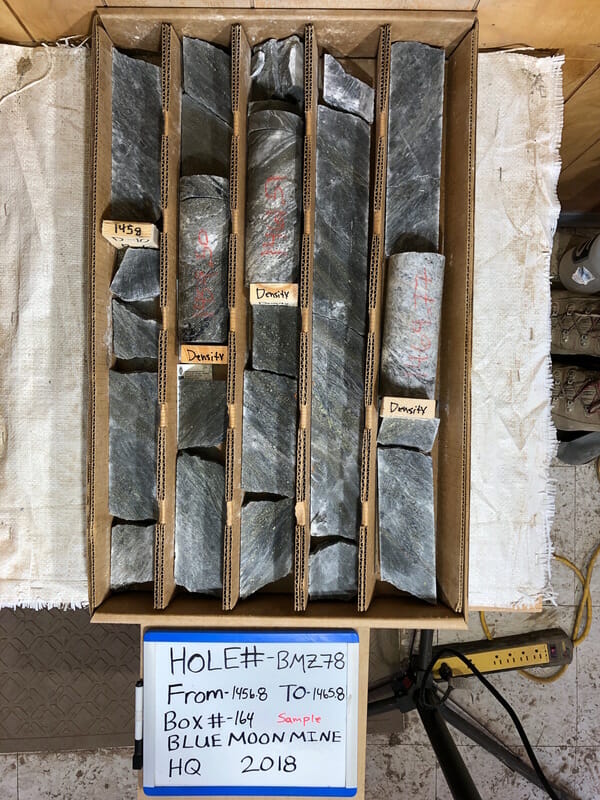 “Our crews are eagerly preparing for the next round of drilling to further build on the grade and the footprint of this deposit. Meanwhile, we look forward to carrying out studies in 2019 to verify the clean metallurgical profile of the Blue Moon mineralization as reported through historical work documented in our NI-43-101 filed on SEDAR on November 20, 2018.”

A word or two on metallurgy:

Blue Moon’s coarse-grained sphalerite, chalcopyrite, and galena are good for recovery rates as the pay metals are easy to separate from the pyrite.

Conventional flotation will give the company multiple concentrate options.

The company isn’t wasting any time – Phase II drilling is on deck.

The company is also advancing Blue Moon to the Preliminary Economic Assessment (PEA) stage. This will give us our first look at the math.

Management has heaps of experience. It had the foresight to bring onboard key players who successfully permitted the open-pit (heap-leach) Soledad Mountain gold mine in California.

Management also has skin in the game, owning over 21% of the outstanding stock. That speaks volumes in my book.

The above timeline looks reasonable, but with the recent consolidation in the zinc sector…

… Blue Moon may need to contend with a resource hungry predator or two along the way.