Late Tuesday night, Wayland Group/Maricann (WAYL.C) CEO Ben Ward took to social media with fury on his mind. He would not succumb to blackmail, dammit, and if those extortionists at Equity.Guru thought he would, they had another thing coming.

And so, he posted this: 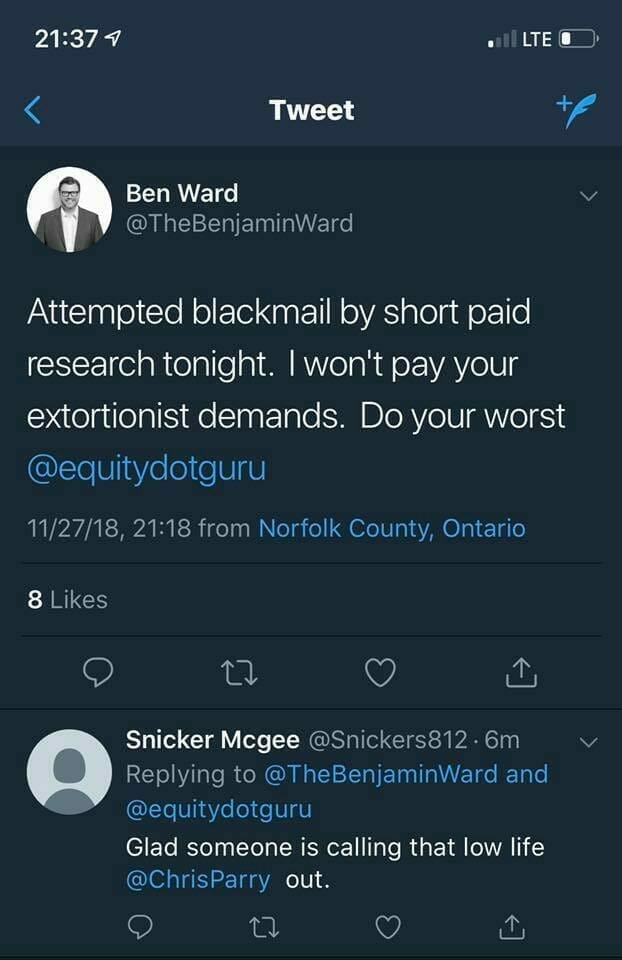 The tweet was picked up by others, retweeted a bunch, favourited by many. And, as you can see, the initial comments attached to the post were abusive toward us – and me specifically. Then it traveled to Facebook investor groups where the screenshot above moved ‘off plantation’ and was seen by hundreds – perhaps thousands more.

Boy, he sure showed us. Or did he?

A few major problems with Ward’s infantile rant: I’ve never spoken to him. Had no story about him planned. We don’t work for short sellers. We don’t blackmail. And we don’t extort.

So basically everything he wrote about us was wrong. And defamatory.

In late 2017, Maricann reps reached out to us to inquire as to whether we could work together on a marketing program. I told them I was happy to chat. No time for a chat was ever set, and neither side pursued it beyond a handful of emails. From that point forward, the only time any story specifically about that company has appeared on our website was over three months ago.

And then we moved on to the many other companies we write about.

Until last night, when my kid’s soccer practice was interrupted by my seeing that a public company CEO was calling me a criminal on social media.

I spent until around 3:30am addressing commenters directly, doing my best to correct the record since the CEO wasn’t doing so. I left a late night voicemail to Wayland demanding they retract and correct. I woke early to find Ward had made all his social media private. A few hours later, the feeds were back, though the offending tweet had been deleted.

It appears Wayland thought that was enough. It wasn’t.

Straight shooter? Now I’ve heard it All! An Extortionist that can’t believe a word he says. #PotStocks https://t.co/ygkbfXb0gb

At Equity.Guru, we have spent several years building our reputation as straight shooters, at a cost to our bottom line. When we sell a stock, we tell you about it first, then give it 24 hours so you can sell first. When we are asked to engage with a potential client, we often refuse if we believe the company has no upside, or the people behind it are thinking ‘short term promote’. That costs us real money, but we consider it an investment in our reputation – and a protection of our readers’ wealth.

And that’s important because our reputation is literally our business model.

That’s no idle boast. From the top of our About Us page:

Equity.Guru is not an investor relations firm, nor an investment advisor company. We’re a media and marketing outlet that has quickly drawn together a substantial audience based on several key differentiators between us and our competitors.

1: We’re straight with the audience. Every deal we do with a company buys our attention, not our favour. If your company hits its milestones, we’ll yell about it from the rooftops, but if it doesn’t, we’ll talk about that openly and honestly. That’s the only way investors will give credence to the positive words we publish.

2. We’re straight with you. We won’t force you to buy tools and programs that don’t give you great results, and we don’t upsell you unnecessarily. If you want editorial coverage or first rate podcasts, that’s what we do best. News blasts? Email lists? Banner ads? Maybe that stuff was effective in 2008, but today’s audience is younger, less prone to spend time on advertorial rubbish, and tougher to win over. We won’t waste your time in the same way we don’t waste theirs.

And here’s a potential client we dodged recently:

Perhaps you think we’re simply writers for hire, and will say nice things about anyone who cuts a cheque. Not so.

When a client pays us for a marketing program, it doesn’t mean they get positive coverage. In fact, we have an entire page on the site devoted to negative stories about our clients:

Here’s one from last week:

So if we’re taking money from companies and STILL saying negative things about them, the idea that we’re extortionists doesn’t pass muster. And having had no contact with Wayland would suggest we’re not really good blackmailers.

That leaves the ‘you work for shorters’ routine that we sometimes hear from people who don’t like our take on their favourite company.

We don’t short sell, as a company or individuals. We don’t advise people to short. We have the ability to short a stock but have never, ever, actually shorted a stock through any brokerage account, self-serve account, or other facility.

That hasn’t stopped some from accusing us of being in league with the great short Satans of streets Wall, Bay, and Howe.

Namaste (N.C) suggested it. Med Men (MMEN.C) alleged it. Heck, investors in client company TGOD alleged it in response to a recent article we wrote (linked above) about the certainty that the stock would face selling pressure in November. None of the companies mentioned needed any short seller to kill their roll, though, at least with TGOD, their slide came from a bunch of stock coming free trading. The others? You can ask them how right we were about their fortunes. 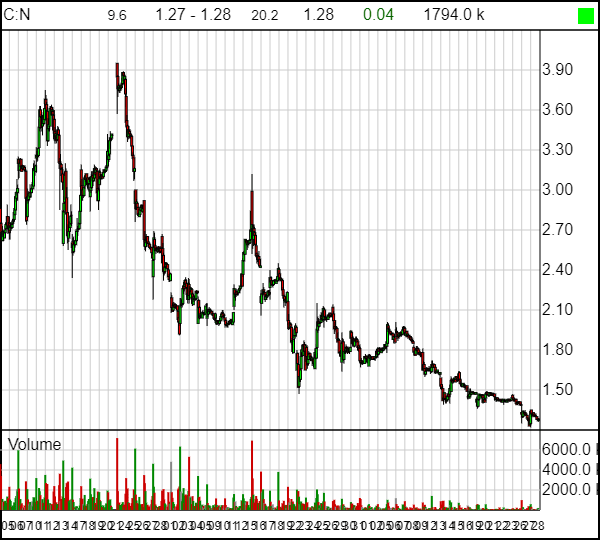 Back to Ben Ward: We’ve spent most of the last day dealing with his carelessness and hubris. As an individual, what he said was wrong and hurtful, and financially damaging to myself, and to our business. But as a public company executive – a representative of a public entity that is governed by financial regulations and disclosure rules that rely heavily on not just compliance but being seen to be compliant, that can suffer losses not just through a lawsuit around careless public statements, but also through lowered share prices and market caps that follow, Ben Ward’s comments were reprehensible.

They were reprehensible for us, for his shareholders, for his board of directors, and for casual strangers who may take them and run with them to their own potential legal peril.

Our reputation is our entire business, and if we allow these charges to go unchallenged, we run the risk of readers accepting them as truth, of clients being damaged by association, of readers making poor financial choices in the belief we haven’t been straight with them and, personally, of my future earning capacity.

I received a call this morning from an emissary – a mutual friend – who asked plainly, ‘what do you want?‘ I said what was needed to put the toothpaste back in the tube was a news release outlining the error the CEO made, how he came to make it, that it was incorrect and he regretted any damage that came from it.

That’s it. Given the chance to demand financial recompense, I instead suggested reputation restoration, lest anyone believe this was some sort of long con trap to, indeed, extort WAYL for money.

The company ignored that suggestion today. The damage is still, to this minute, being done. I’m still spending my time fighting it. And, for all I know, potential clients may be becoming non clients as a result.

So now it’s costing us money, I’m done playing. Equity.Guru will begin the process of filing a defamation lawsuit tomorrow morning through our representatives at Harper Grey.

If Wayland won’t put out a news release apologizing for the damage they’ve caused us, we’ll put one out warning shareholders of what’s coming.

PS: Late today, this story was published on another website, which is probably why Ward was worried. It looks worrisome.

ADDENDUM: WAYL released financial results today for Q3. As a $280m market cap company, they earned $225k this quarter. If that seems small, it’s nearly 1/3 of what they earned a year ago. Yoinks.

FULL DISCLOSURE: Of the companies mentioned in this piece, only TGOD is a client, or has ever been offered a chance to be a client. The author and the publishing company have never purchased (or shorted) Namaste, Med Men, or Wayland stock.