In a recent Equity Guru article, we talked about gold’s underperformance in the face of off-the-charts geopolitical and economic uncertainty. The explanations for said underperformance vary from the ‘Barbarous Relic‘ argument to deeply impassioned beliefs that the yellow metal is in the grips of an organized price suppression campaign, one carried out by a number of central banks around the globe… a deep state or ‘cartel’ if you will.

Brushing all of the geopolitical, economic and conspiracy disquiet aside, there exists the very real prospect that our tiny blue planet is, simply, tapped out.

New gold discoveries are few and far between.The brutal bear market of the past 7-years didn’t help matters, forcing producing companies to dramatically scale back exploration spending, but the problem may be more profound.

We may have already arrived at the precipice, the one where the industry faces steady annual production declines from here on.

South Africa may be proof positive, the smoking gun…

Once boasting over 1,000 tonnes of annual gold production a half-century ago, South Africa produced a mere 139.9 tonnes in 2017. That’s one helluva chop in output.

Once the top gold-producer in the world by a wide margin, South Africa’s gold mines have been slowing every year since 2008, with the exception of 2013 when production rose by a few tonnes. The nation is still home to the world’s deepest gold mine, the Mponeng mine, extending 2.5 miles underground.

(when you’re forced to dig that deep for a few grams of gold per tonne, you know we’re near the end)

Worse yet, according to the Environmental Economic Accounts Compendium published by African Statistics Day, South Africa may completely deplete its reserve base in less than four decades. When you consider that South Africa is currently ranked the eighth largest gold producer on the planet, that is an ominous forecast.

This is a desolate forecast. Not an easy one to grasp. But it does present an extraordinary opportunity for junior exploration companies in the process of defining large, potentially economic ore bodies.

The junior exploration sector isn’t exactly teeming with this kind of opportunity, but certain companies – those with ounces in the ground – are being watched very, very closely by those higher up on the food chain.

Black Rock Gold (BRC.V) holds a large, 4,537 hectare chunk of prospective terrain strategically located near the confluence of the Carlin Trend and the Northern Nevada Rift of north-central Nevada. This is THE premier gold mining destination in all of North America. It certainly claims top spot as the richest. 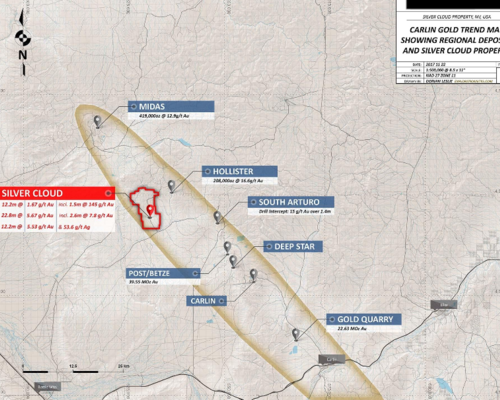 It doesn’t take heaps of foresight to expect that Hecla will be monitoring developments at Silver Cloud very very closely.

“Opportunities to acquire significant land packages along Nevada’s prolific gold trends are very rare. Rarer still are for these land packages to have the highest grade mines in the U.S. and this transaction is consistent with Hecla’s strategy of owning large prospective land packages with mines where we can improve costs, grow reserves and expand production”, stated Phillips S. Baker, Jr., Hecla’s President and CEO, regarding the acquisition

Silver Cloud, like both Midas and Hollister, is a low-sulphidation epithermal Au-Ag banded vein deposit. 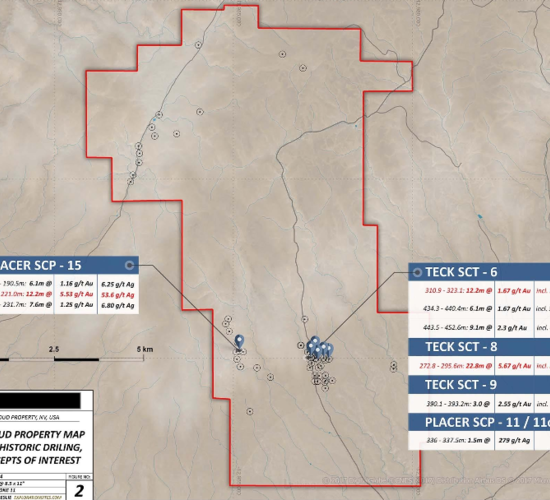 Silver Cloud was probed with the truth machine by Teck Resources and Placer Dome back in the day, but the effort lacked conviction. Still, these tentative drilling campaigns yielded impressive results:

Neither of these intercepts were ever followed up.

The main gold-silver targets at the Silver Cloud Property are Midas-Hollister style volcanic epithermal low-sulfidation vein and disseminated gold/silver deposits. These mineralized areas appear to be situated along or near fault zones, close to or beneath siliceous “sinter” hot spring deposits. These siliceous sinters occur on and close to the paleozoic sediment – tertiary volcanic contact subsurface along the Midas – Silver Cloud trend, which is part of the “Northern Nevada Rift.”

Regarding ongoing efforts to fine-tune drill target selection at Silver Cloud, on August 14, the company released an exploration update.

Significantly, on October 30th, Blackrock named Brian Morris as President of the company. Mr. Morris – an authority on the Northern Nevada Rift and low sulphidation, epithermal gold systems – was leading the charge with neighbor Klondex Mines Ltd when it was taken out at a fat premium by Hecla.

Then, on November 12th, tragedy struck.

Brian Morris was killed on the evening of November 10, 2018, in Reno after he had stopped to act as a Good Samaritan at the scene of a prior car accident. Two other people were also killed.

“The Company’s board of directors and management extend our deepest condolences to the family and many friends of Mr. Morris. Together, we mourn the loss of an exceptionally gifted person. Brian will leave an enormous void on lots of different levels and will be greatly missed.”

Deepak Malhotra, Chairman of Blackrock’s board, said,” Words do not suffice to express the heartfelt sorrow that we all feel for the passing of Mr. Morris. He brought great enthusiasm and energy to the Silver Cloud Project. We will carry his passion and work forward, making this project a success.”

We here at Equity Guru also extend our deepest condolences to Mr. Morris’ family and friends.

The passing of Mr. Morris obviously leaves a huge gap in the company. But I get a sense that management will come out of these tragic circumstances more determined than ever to make a major discovery at Silver Cloud.

Speaking to the tragic loss of Mr. Morris, Andrew Pollard, President of The Mining Recruitment Group and respected contributor over at Tommy Humphreys’ ceo.ca, posted the following insightful comment…

It’s incredibly tragic; was caused by a drunk driver who was also the only person to have walked away. Ive spoken with management and everyone has a renewed and resolute sense of purpose to see this a success. Brian knew the system better than anyone and there was a reason as to why he joined the company. It wasn’t for the money (was a sizeable pay cut) and it wasn’t due to a lack of other offers. It was because he had always wanted to get his hands on Silver cloud and was certain there was at least one economic discovery to be made and that he could be the one to make it. He brought John Seaberg, who also served as an SVP of Klondex (in addition to former VP IR for Newmont) along with him to join the Board and as I understand it, once we get this financed, the plan is to move forward using Brian’s initial ideas with respect to targeting. Nothing will lessen the tragedy but I truly hope the story of Brian is capped off with a discovery, which everyone will want to be in his name. Long $brc

A high-grade discovery, in Brian’s name, would be a sweet and fitting development indeed.

One needs to keep in mind that there are very few pieces of the Carlin puzzle that have not already been claimed and systematically explored using modern-day exploration technologies. The Silver Cloud property is one of those few remaining puzzle pieces. It hasn’t seen drilling in well over a decade. Its surface has barely been scratched.

Once management gets back on its feet and rolls out a rig to the Silver Cloud property, I would expect the stock to begin ramping up in anticipation of a new Carlin discovery.

Full disclosure: Blackrock is not an Equity Guru client.