We all love it when a stock we bought into goes on a silly, baseless run.

Of course, a silly, baseless run should be a signal to get out, but nobody does. We keep riding, hoping that, like Wile E. Coyote running off a cliff, that we’ll just hold in mid-air a little while longer, and that we’ll be the ones catching a branch before everyone else goes thud.

Yesterday, United Battery Metals (UBM.V), which had gone on a hard promo-led run from $1 to $1.68 in a bit under a month, finally felt the effects of gravity, losing nearly all of that rise in a single day.

As I write this, it sits at $1.17 and people on messageboards are calling it a ‘buying opportunity.’

We had the chance to work with UBM a couple of times over the last few months and have not pursued it. I can’t tell you exactly why; sometimes there’s just the feint whiff of something around a company that makes you drag your feet. A little desperation. A stock chart that’s too disconnected from the news behind it. And, in this case, unusually, competitors asking if you’d consider writing about it for them.

We took a wait and see approach on UBM, and that proved a good move.

Because United Battery Metals is a pump and dump. 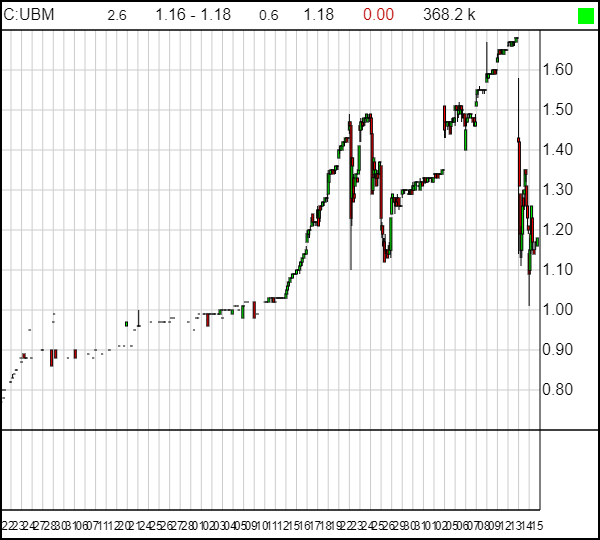 There, we said it. Bring the lawyers if you want to, but I don’t think anyone could argue the contrary.

Today, the company put out a news release that tackled two things:

According to information available to the Federal Financial Supervisory Authority (Bundesanstalt fur Finanzdienstleistungsaufsicht (BaFin)), buy recommendations are currently being issued for shares in United Battery Metals on a large scale through e-mail newsletters.

BaFin has evidence indicating that these buy recommendations contain false or misleading information and/or that existing conflicts of interest are wrongfully concealed. It has initiated an investigation into suspected market manipulation in the share.

The Germans, which helpfully offer their information in English, and posted the info under the category ‘market manipulation’, didn’t say much more than what was revealed by the company itself, but closed with:

BaFin therefore recommends all investors to closely examine whether the information provided is reliable and to obtain information about the company in question from other sources prior to buying the shares.

Going to multiple sources for your stock information is an important rule, but it’s not always as easy to do as you think. We did a Twitter search for $UBM and this is what we found in terms of what’s been most recently written about them:

When alternate sources are actually all the same source, just splashed on different Twitter accounts and websites, they’re not really very alternate.

So who is behind all of these ‘financial news’ sites?

We took a chance that the first one to tweet on that list would be the parent, and we were right.

This is Investor Brand Network.

The Investor Brand Network (IBN) consists of financial brands introduced to the investment public over a period of more than 12 years. IBN has a collective following of nearly 2 million social media followers, these unique investor brands aim to fulfill the unique needs of a growing client partner base and solutions. 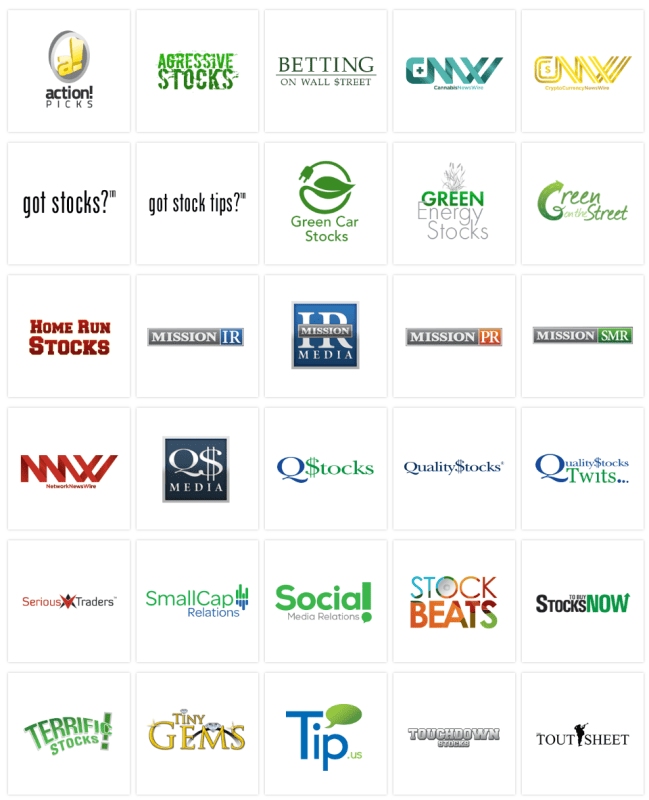 If you went to Home Run Stocks, as a random selection, and tried to find whether UBM was paying that… company? .. to write about them, you’d be out of luck. The disclaimer absolves them of any blame if you’re dumb enough to trust them, claims it’s all just for entertainment and, eventually, points you to IBN for more specific information.

And if you want to know who owns IBN, their disclaimer will also remind you not to trust them, ever, at all, and will eventually send you over to Network News Wire (NNW) where, if you hit the disclaimer again, you’ll again be told to ignore anything you read on the site but you’ll also find a helpful list of what they’re paid to work for a given company, what they do for them, how long they’re doing it, and whether that cash is coming directly or through a third party.

That’s because the SEC demands such sites make that info public. Canadian regulators do not.

Now, here’s where it gets tricky. We said UBM was a pump and dump, and that’s the case – but that may not be down to the company’s management.

Back to their news release:

The company has not approved any marketing with buy recommendations on the company, nor was it aware of any potential document until it was informed by IIROC (Investment Industry Regulatory Organization of Canada) this morning of the concerns of BaFin.

The company is being mealy mouthed here. Clearly it has approved of marketing to do with its stock – but it draws the line (publicly) at marketing ‘with buy recommendations.‘

That’s fair. At Equity.Guru, we do marketing for our client companies, and marketing a stock isn’t inherently a bad thing, in fact, companies that don’t do it run the risk of their narrative being hijacked by short sellers. If you don’t dominate the conversation about you, others will fill the vacuum. Shareholders want to know their investment will be marketed because they want more buyers of the stock, so the share price will rise. An absence of marketing can often lead to a long slide, even with good company results.

But there’s marketing and there’s promo and there’s abject pumpage. We do the first one. We frown a little at the second. And we hunt and kill the third.

This sort of shit, frankly, is the third.

And one company is sitting on the only potential major U.S. deposit of Element 23: United Battery Metals (UBM, UBMCF)

Vanadium is likely to displace lithium as the world’s most important battery metal. That’s according to billionaire Robert Friedland, who says there’s a revolution coming in energy storage, and it’s all thanks to Vanadium.

Frieldand has nothing to do with UBM, though the article links his name to the UBM website. Sneaky.

United Battery Metals (UBM, UBMCF) is unique among American mining companies: it’s sitting on top of an estimated resource of 2,640,000 pounds of vanadium according to a report prepared in 2013 by Anthony Adkins who is a qualified professional geologist.

Great. That’s $50m worth of mined product. You let me know when you get a mine operational for less than $100m.

UBMCF has a potential major find on their hands: what could possibly be one of the first productive vanadium mines in the United States.

‘One of’ the first. That’s like being ‘mostly’ pregnant.

By 2020, the U.S. could be the largest vanadium market on the planet.

By 2020, Charlize Theron could be enjoying our honeymoon.

Other resources companies looking to take advantage of the next commodity boom:

This is where Oilprice.com does its usual ticker-targeting bullshit routine when it’s promoting a smallcap. ‘Only five companies are in this space! A NYSE one, a NASDAQ one, a TSX one, and our client who is small and could multiply a ton!’

Others do this too: here’s Network News Wire’s write-up, again pushing the ‘this thing will be like these things’ line. My favourite is where they attempt to claim Vanadium will benefit from the electric vehicle movement, when anyone who understands vanadium redox batteries knows they weigh a freaking ton and would never be useful in that space.

The move towards the adoption of electric vehicles (EV’s) along with solar and wind power generation has sparked interest in what could become the next super metal: vanadium. The United States doesn’t currently produce vanadium; however, United Battery Metals (cse:UBM) (fwb:0UL) is in development of a world-class vanadium resource in Colorado. The vanadium redox battery (VRB) is a potentially revolutionary way to store energy, and major miners such as Largo Resources may not be able to react quickly enough to offset the potential spike in vanadium demand.

Give me a GD break.

So who pays for this stuff?

That may be a little hard to read, but it says, “UBMCF: NetworkNewsWire (NNW) will receive $15,000 per month for 90 days of NNW Core Solutions from a 3rd Party on behalf of UBMCF [emphasis ours] for Brand Awareness Distribution (BAD), Corporate Communications, News & Editorial Syndication, Press Release Enhancement and Social Media Solutions provided by NNW and Investor Brand Network (IBN). Please read entire NNW Disclaimer for FULL Compensation Disclosures.”

There are rules in place that dictate how we, as representatives of a public company, behave in our work. When we at Equity.Guru write a story about a client, we can’t/don’t issue buy or sell advice and can’t make forward statements (this stock will fly!), because 1) we’re not investment advisors, and 2) we’re agents of the company, so what we say is, by extension, what the company is saying.

But if a third party comes along and wants to pay us to write about a company they own, we’re no longer agents of the company and then shit starts to get weird.

We’ve done that deal before – once – and quickly realized it was bad juju. We have not done it since and, in fact, ceased billing for that original deal very early into it. We also avoid taking stock options for our work, which are decisions that have allowed us to not only sit down with regulators and be open about our dealings, but have also kept us out of mucky investigations of the industry that look bad for all involved.

Of course, nobody is overtly breaking the law here. It’s certainly not a felony for a company to market themselves, or for a wealthy investor to pay someone to market a company they hold a big stake in. And it’s not betraying any laws to build fifty financial websites of limited actual value and use them to push out stories you’ve been paid to write.

As for the German newsletter writers screaming BUY! BUY! and not disclosing their financial interest, that’s a problem, and one it looks like the Germans are dealing with.

The real problem is in the dumping. And UBM stock has been unceremoniously dumped, on no news, on no macro forces, just run up hard for a few weeks and – one day – blammo, someone with a big stake, who presumably either financed the promo or, at least, knew about it, pulled the rug out from under the company and its shareholders.

The company may have had no idea what was coming. But the company knows who sold.

So do I. They’ll want to quit that routine right about now because eyes are on them.