Nano One Materials (NNO.V) battery tech is movin’ on up, and provin’ out

That tech—a new refinement process for Lithium Iron Phosphate (LFP) cathode material—is coming in at 10 to 30 per cent below regular manufacturing benchmarks.

“Major cathode producers have begun evaluating our LFP,” said Dan Blondal, CEO, on a call with Equity.Guru today.  He added those producers are generating the same “excellent battery performance” in their own testing as Nano has seen in their tests.

Why is LFP important?

Enter Nano One’s tech triumph: lowering the cost of production of LFP through a proprietary process that could open up the entire industry. 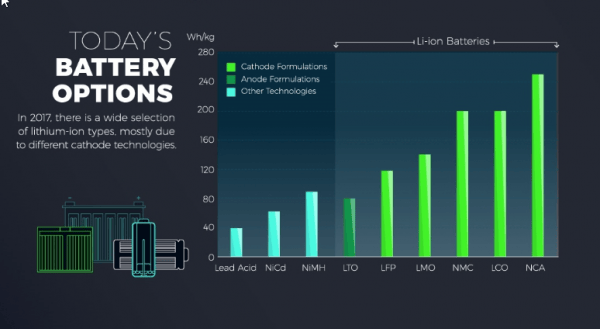 This is important because 66 per cent of the world’s cobalt is mined in the Democratic Republic of Congo. A lot of that supply is mined unethically. Mining companies use child labour in ostensibly horrible conditions to get at the cobalt, which is then usually combined with other, ethically-mined cobalt during the processing stage and, VOILA! Bye-bye bad cobalt, hello beautiful (mostly ethical) battery.

But what the West wants, read: top-performing rechargeable batteries, the West gets. So cobalt mining—both good and horrid—isn’t going anywhere.

Most companies making products that use rechargeable batteries aren’t fans of child labour if they can help it. Many are struggling to find ethical sources for their batteries to fill an ever-increasing demand.

So cobalt-free LFP tech is important. It’s so important that it could be a game changer if the cobalt-free tech takes off. But Nano isn’t relying on cobalt as an industry being wiped out – the company also thinks, if costs continue to fall, “LFP may also replace lead acid batteries,” which would also strengthen demand dramatically. 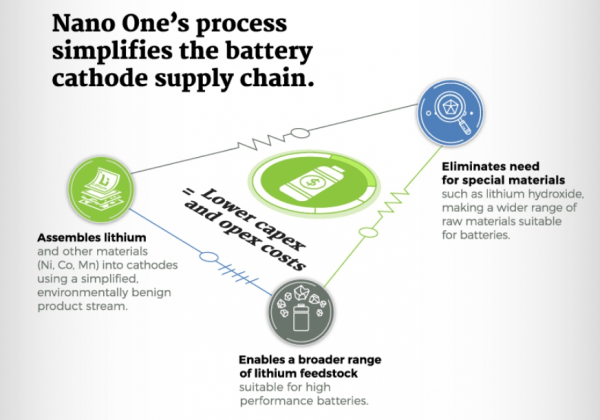 We have a novel way to make it,” noted John Lando, president. “It gives us very good performance and, at the same time, we’re cutting costs significantly.” Lando said his company’s process is less expensive, safer, and more durable than other ways to produce cathodes for li-ion batteries.

If the tech can take off, be it through licensing deals with suppliers or partnerships going forward, so will Nano One’s stock price. And Blondal thinks his tech could be “a disruptive force in the lithium-ion battery market space.”

I do too, but only because NNO.V is legitimately achieving these cost-saving numbers.

They are already getting some attention from big cathode producers. Who could be next? Major battery suckers like Google, Apple, Sony, Motorola, and (add in 90 per cent of the companies in North America here) could be knocking soon. Some are, though such deals are usually done in the quiet, and can only be announced once they’re completed. Which is why Nano One stock has dragged downwards over the last year, despite their testing data going from strength to strength.

Paul Matysek, Nano One Chairman and public markets rock god, thinks his company’s tech is compelling enough to draw in those bigger dogs. “LFP technology is ripe for partnership on full scale production, and this adds to other opportunities Nano One is pursuing to jointly develop solid state batteries and low-cobalt chemistries.”

The world-wide market for LFP is projected to be worth about $1.5 billion by 2025 as it hits production levels of about 130,000 tonnes. That’s a lot of tonnage and a lot of coin. Nano One plans to use their process to up production of LFP to 10,000 tonnes a year. This is where it gets interesting.

That tonnage comes to about 7.7 per cent of the projected market share. Add those numbers into the math machine with $1.5 billion and out pops a whopping, investor-happy $116 million worth of production. That is a lot of coin.

Here is the nitty-gritty on the various ways to produce LFP, as written by Nano One:

LFP is currently produced through either hydrothermal or solid-state methods. The hydrothermal method produces high quality LFP but is costly due to high pressure and high temperature aqueous reactions and a waste lithium salt stream that must be recovered. The solid-state method, by comparison, is lower cost with lower quality LFP, produced by grinding, milling and firing in controlled atmospheres. Both of these methods require powders of LFP to be carbon coated in a series of post-production steps. In contrast to these production methods, Nano One has developed a simpler process that produces high performance carbon coated LFP particles from an aqueous solution operating at atmospheric temperature, pressure and mild pH. It uses low cost raw materials, with fewer steps and does not produce a waste stream.

If these things happen Nano One, and it stockholders, will be movin’ on up!

Questions to chew on

Will cobalt continue to dominate the rechargeable battery space or will ethical LFP find its footing? (If I knew the answer I’d drop a tonne of cash into one of those stocks.) Can Nano One bring their production costs down even lower? Can Nano One forge a mutually beneficial partnership with other companies?

So, lots of questions. But one guarantee: unethical mining alway gets bashed, so an ethical alternative has a tonne of upside.

In Other Nano One News:

Tl;dr (or click): Basically, the National Research Council of Canada Industrial Research Assistance Program is kicking about $350K over to NNO “to aid in the development of Nano One’s coatings for high durability lithium-ion battery cathodes.”

Free money. No dilution. Nano One continues to move forward.

Full disclosure: Nano One is an Equity Guru marketing client.