On October18, 2018 iAnthus Capital (IAN.C) announced a deal to “combine with MPX” in an all-stock transaction valued at $835 million.

This deal is the first public-to-public merger transaction in U.S. cannabis history.

The combined company does not include MPX International.

But it does expand iAnthus’ business activities to 56 retail locations and 14 cultivation/processing facilities in 10 U.S. states.

The merger is accretive to iAnthus.

“This is a watershed moment for iAnthus, as we nearly double the size of our national footprint in the U.S,” stated Hadley Ford, CEO of IAN, “iAnthus has been strategically focused on building scale, and this announcement crystallizes our position as one of the largest multi-state operators in North America.”

“This acquisition improves our position in all three,” stated Ford, “We are especially thrilled to have Beth Stavola, an early pioneer and visionary in the industry, join our board and senior leadership.”

Ms. Stavola – an ex-Wall Street equity sales manager – is Chief Operations Officer (COO) of MPX. She made an early investment in a medical marijuana company, took over the company and “started rolling up licenses in Arizona”.

“I was raised in a very conservative “say no to drugs” family,” explained Stavola in an Authority Magazine interview, “I slowly started educating those around me about the healing properties of the cannabis plant.”

Stavola has become a missionary for the benefits of all of the cannabinoids, not just CBD and THC. She points out the U.S. federal legalisation would lead to “incredible tax revenue.”

“As per the Tax Foundation, the marijuana industry could generate up to $28 billion in tax revenues at the federal, state, and local government levels,” stated Stavola, “There is also opportunity for job creation.”

“The ability for the combined company to sell products across 10 states with an addressable market of 112 million people was key to my excitement about joining forces,” stated Stavola about the merger, “The opportunity in front of us is enormous.”

The board of directors of both iAnthus and MPX, have unanimously approved the transaction.

Upon completion of the transaction, the board of directors of the new combined company will have 7 directors, with 3 directors being nominated by MPX.

iAnthus and MPX have obvious geographical and business synergies.  Beyond that, both companies are captained by good communicators, who have a history of listening to shareholders anxieties and speaking clearly to shareholders.

This last point is important.

Social media has created an ocean of un-curated opinion.

Every Facebook (FB.NASDAQ) account is a vanity-press autobiography. In this new world, all lives are worth documenting. All ideas are worth listening to.

Modern CEOs are expected to be both absorbent and reactive.

Namaste’s (N.V) CEO Sean Bollinger has mastered this art.  Mr. Bollinger natters away to shareholders on You Tube every week, providing updates and answering questions. The commentary is relentlessly vaporous and promotional.  But Namaste shareholders appreciate the personal touch. They refer to him “Sean”.  When Mr. Bollinger said, “Please don’t sell Namaste stock” – many of them obliged him.

iAnthus’ CEO Hadley Ford is no Sean Bollinger.  When he talks it’s a bullshit-free zone. But he has a large public personality, and he’s not afraid to admit a mistake or articulate a change in business strategy.

Example: at the 1:56 minute mark of this podcast you can hear him respond to shareholder concerns.

“You said our balance sheet was too hard to understand,” stated Ford on the podcast, “So we got rid of convoluted ownership structures and pioneered new ways to show 100% ownership of our operations in key states. You said you were worried about our ability to fund our licenses, so we raised more money both publicly and privately culminating in our recent $50 million raise”. 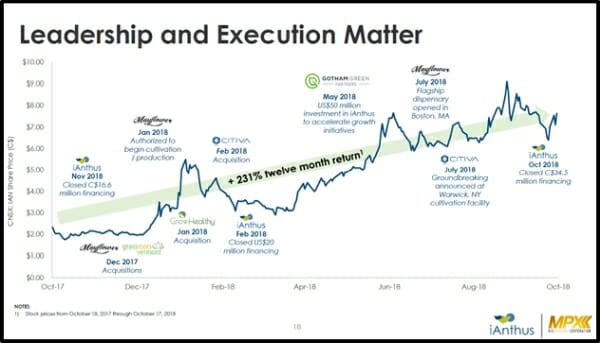 We liked them first. 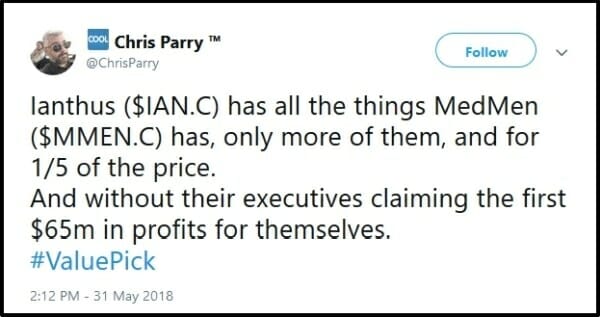 The merger agreement requires the approval of at least 66.6% of the votes cast by MPX shareholders at a special meeting targeted for January 2019.

“The nascent U.S. cannabis market is still in a land-grab phase,” stated Scott Boyes CEO of MPX, “and we feel that our footprint when combined with iAnthus, provides our investors with the strongest possible exposure to this explosive marketplace.”

According to Arcview Market Research, iAnthus’ new 10-state footprint is projected to generate approximately $16.2 billion in yearly cannabis sales by 2022.

Full Disclosure:  iAnthus is an Equity Guru marketing client, and we own stock.