E3 Metals’ (ETMC.V) has received $100,000 from the Government of Alberta to assist in the development of its proprietary lithium extraction technology.

Alberta Innovates, the provincial funding arm which granted E3 Metals this funding, is mandated to fund research and technological innovation to improve the lives of Albertans.

With demand for lithium on the rise thanks to the EV Revolution, and E3 Metals’ enormous deposit of lithium, the company is aiming to satisfy demand for lithium, create jobs and to leave a fraction of the environmental footprint a traditional mining operation would. 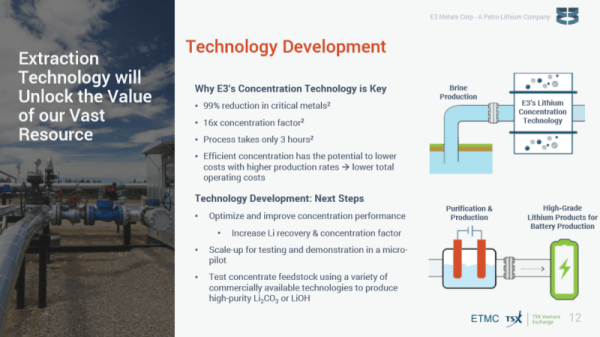 Petroleum brine is typically considered a waste product by oil producers, but E3 Metals is working to develop a low-cost form of lithium extraction from brine to both satisfy a growing global demand for lithium while also remaining environmentally conscious.

“This project supports the strategic objective of developing a thriving clean tech sector in Alberta — via the development of a lithium extraction technology and resource that is essential to energy storage technology deployment,” commented John Zhou, VP Clean Energy of Alberta Innovates. 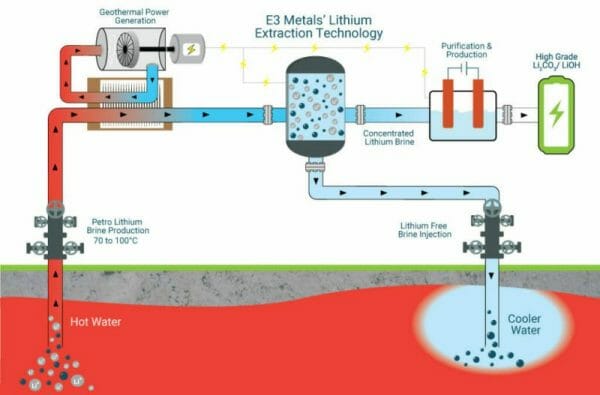 E3 Metals wants to do things differently. The company’s extraction technology is designed to use existing oil and gas sites, combined with the repurposing of their infrastructure, to produce and process lithium brine which is largely available at surface both quickly and safely.

Once the technology is fully operational:

E3 Metals’ brine will be produced at a sufficient temperature (70-100oC) and flow rate (up to 10,000 of m3/d per well), to generate geothermal heat and power on site. The use of this energy for the production of brine from the subsurface and processing of lithium at surface is expected to significantly lower both operating costs and greenhouse gas (GHG) emissions.

E3 Metals’ announced in May that their extraction technology achieved a 99 percent reduction in critical metals and a 16x concentration factor in three hours.

E3 Metals aims to build a demonstration facility for the extraction process by mid to late 2019. Until then, the company continues to sample the Leduc Reservoir and is working to produce additional mineral resource estimates.

The project synergizes with concurrent resource extraction projects in the province. As a byproduct of oil and gas extraction within mining-friendly Alberta, lithium brine is surfacing naturally, eliminating the need to drill for exploration wells for sampling.

E3 Metals generated two NI 43-101 resources which show a finding cost of $0.18/tonne LCE. The company holds 1.4 million acres of lithium permits in Alberta over the Leduc Reef Trend, according to their investor deck, making it the largest contiguous land holder in South-Central Alberta.

Further, two NI 43-101 compliant reports of E3 Metals’ claims in Alberta inferred mineral resources of 6.7 Mt of Lithium Carbonate Equivalent (LCE), making it one of the largest Petro-Lithium brine resources in the world.

E3 Metals as an investment

Besides the most recent funding grant, E3 Metals was awarded up to $56,000 by the National Research Council of Canada Industrial Research Assistance Program in June.

Earlier that month, the company would go on to collaborate with Calgary-based Scovan Engineering to “held advance engineering elements of its Alberta Petro-Lithium project.”

The company is clearly oriented towards maximising its pool of funding and expertise for the purpose of extracting its sizable resource.

Just to reiterate what has already been said about E3 Metals by EG’s Greg Nolan, the company has a tight share structure, a modest market-cap of $5.9M and management team which has solid technical backgrounds in the oil and gas sector. 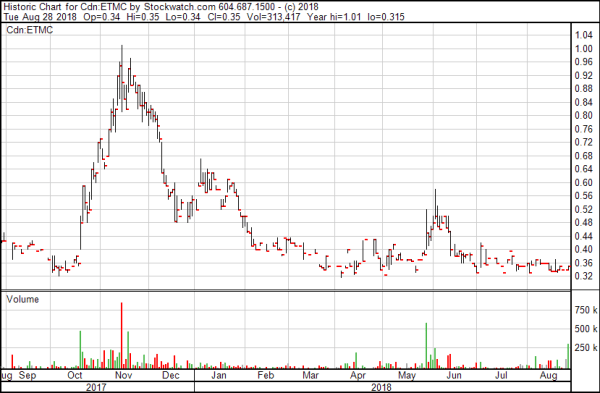 In conjunction with its technology’s proven functionality and current share price, E3 Metals seems to have exceptional value.