Ascent Industries (ASNT.C) lands on the CSE Thursday: You’ll want to dig in on this

A few years back, when Health Canada wasn’t really handing out cannabis grow or sales licenses, I attended a meeting in a crappy chain restaurant by the highway in North Richmond. That meeting was packed.

It was a collection of MMAR growers, folks who owned unused warehouses, rampant weed activists, accountants who were ready for their big play, and dealmakers looking for the next likely licensee.

In the middle of the pack was a circle of very interesting people that everyone wanted to talk to.

Rosy is always at those kind of events, because nobody knows more than her about the weed landscape in Canada and she’s particularly good people, so she was holding court.

But the Agrima guys, there was something about them. They weren’t bathed in the desperation of the other crews. They weren’t talking about future plans, they were talking about what they’d done. They’d already built their facility. It was already thriving. And it was, if you asked anyone in the room, the best of the best.

“These kids are going to kill it,” said Mondin. “They’re rock stars.”

Not to Health Canada they weren’t, at least in those early days, when growing under the old MMAR license effectively meant you were blackballed as being ‘too grey’ for a full clearance. Under the old Harper regime, where the courts had ordered the government allow medical weed but the government was hell bent on dragging its feet to the point of contempt of court, just having an operation in Maple Ridge, home to several decades of illegal grows, was enough to count you out. Meanwhile, other outfits – some of them shady AF if I’m honest – were walked through the process seemingly selected at random to go forward with a license worth $40m at the time.

So Agrima did what Agrima has always done; it just kept building.

These guys just never doubted that they would eventually make it.

A small grow facility at Campbell’s home, with adorable red barn doors painted on the side to prevent over-the-fence looky-lou’s, became a bigger facility, with extraction tech and more rooms and state of the art security and tracking tech, and legions of local folks who saw not just a career path with Campbell’s crew, but a company willing to invest in their training, and throw staff parties on Fridays by the pool.

I mean, look at this joint: This is a happy crew.

I invested in this group years before it came to the market, because that’s how good they were. These were young, smart, driven, no bullshit guys who didn’t take the easy money early but instead insisted on laying the foundation for something epic, and if you didn’t see what they saw, that was fine by them because you were wrong.

That investment I made uninvested itself when Health Canada failed them on their security screening, a situation that earlier conference room of applicants would take as a warning sign. Hell, if the Agrima kids couldn’t get through the system, how could anyone?

But the Agrima guys never stopped, or even slowed, from their mission; to create quality product in a fully vertically integrated facility that could run from agriculture to extraction to product dev to retail in multiple countries.

They’re a public company, as of Thursday, and if the market knows a god damned thing about anything, there will be a rush for their stock, because – and I say this knowing it will be controversial – they’re Canopy Growth Corp (WEED.T) without the insane market cap, and with US exposure.

Bear with me here. 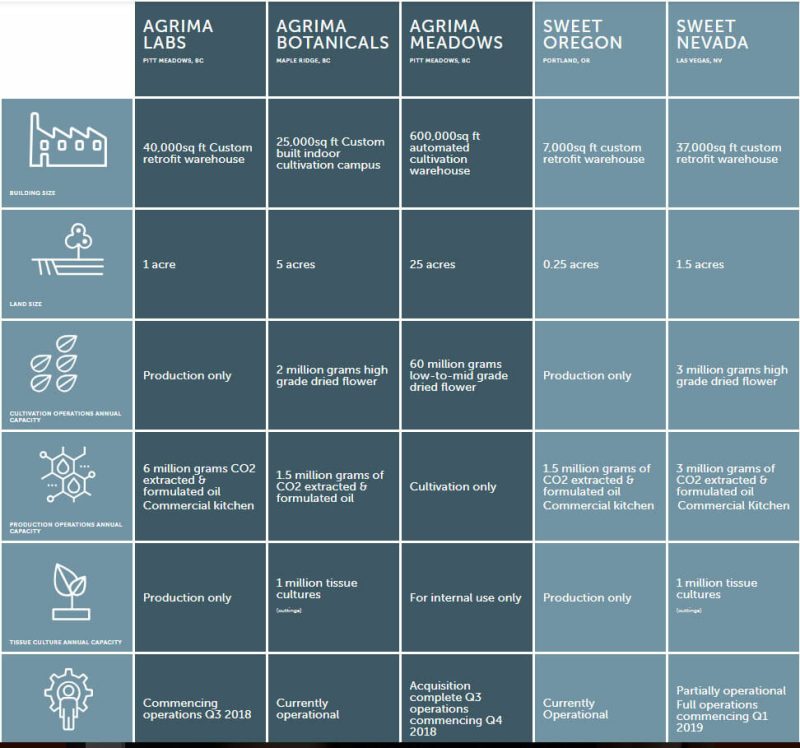 Here’s how it goes:

Agrima Botanicals is the OG, a 25k sq ft custom build out that they’re using to grow flower, handle extractions, and do tissue culturing. If that was the only business, you’re looking at a $60-$100m pubco.

But it’s not. They’re midway through a multi storey buildout of Agrima Labs, which will be their oils extraction and formulation facility and kitchen. This is a mega oils/edibles/beverages plant. I’ve walked through it. It’s a monster. While much of what Canada allows in the way of commercial cannabis products is limited right now, October is coming, and with it will come new rules, presumably allowing many more things that Ascent has either already developed, or will develop. They also plan to create IP for sale in the US and other parts of the world, where things like edibles may be more legal than here.

But first, Agrima Meadows is a 650k sq ft pepper production greenhouse. Again, this is a monster.

Right now, it pounds out several pound bags of vegetables for supermarket chains. The pepper plants wind up ropes that go 12 feet high, and stretch as far as the eye can see. Full agri crews and automated production keep it brimming with commerce, and the production is quite the sight.

Ascent is looking to convert this to weed ASAP.

I asked Campbell, off the record, whether he was intent on actually building out that conversion ASAP or if it was a stock play, like I suspect is happening at several large LPs with big ‘announced’ plans but not much progress.

He said, “Oh no, we’re moving hard. We’re going to need it to be at full production as soon as possible.”

Side note: He didn’t mean he needs it to be at full production to satisfy wholesale needs. Ascent plans to use that production for its own needs. It’s keeping every last drop of oil and turning it into consumer products.

It’ll need some of that for Aurora Cannabis (ACB.T), because the mega giant LP signed a supply deal with the company in June.

“The agreement with Ascent brings further differentiation to Aurora’s growing portfolio of products,” said Terry Booth, CEO. “Expanding product choice to our various audiences through quality operators such as Agrima positions us well to accelerate growth. Furthermore, the relationship provides an opportunity to potentially source additional, higher-margin derivative products down the line.” 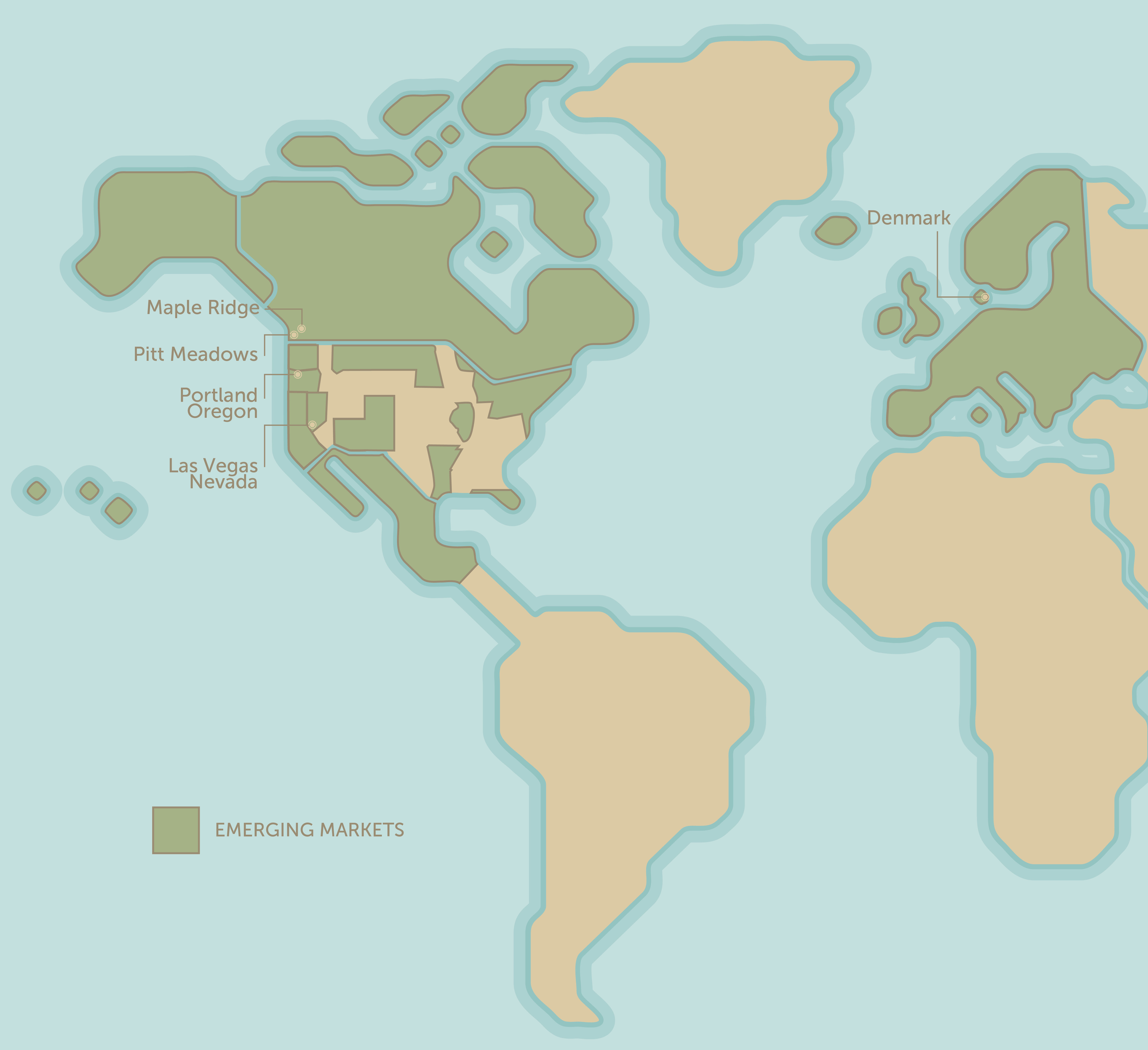 This is the map of where Ascent is doing business right now. You’ll notice BC is a small part of the deal.

Outside BC, you’ve got facilities and business in Portland, Oregon, and Las Vegas, Nevada.

And Denmark, because Europe.

In Portland: A small grow operation, but a surging oil extraction kitchen that creates product now. Ascent doesn’t want to build a mega facility out there to grow because, right now, the price of weed in Portland is shattered. There’s too much of it, the government drove a lot of businesses out of business by screwing about with regulations and making life more difficult than it intended, and the price has commoditized. Ascent tells us they are seeing $500 a lb in wholesale pricing out there, so it makes more sense to buy product and extract it than grow it yourself. Which makes for a good, cheap business with high upside.

In Vegas: They have a situation very similar to what’s in Maple Ridge: A 35k sq ft facility to grow, extractions that would bring 3m annual grams of CO2 extracted product when at capacity, a tissue culturing set up, and exposure to what should quickly become the biggest weed tourism market in the world.

Oh, and they got a dealer’s license:

The Dealer’s Licence is aligned with a key area of expertise of the Company, being the manufacturing of cannabis oil-based products, such as gel-caps and tinctures. The Dealer’s Licence permits the possession, production, packaging, sale, sending, transportation and delivery of these products. Furthermore, the Dealer’s Licence enables Agrima to conduct research, clinical trials and provide a variety of analytical testing for the Company and other licenced producers and licenced dealers.

Under the Dealer’s Licence, Agrima intends to produce medically focused products such as gel-caps, tinctures and other similar products and sell them to other licenced entities in Canada, as well as internationally into jurisdictions which have legally approved medical cannabis regimes.  In connection with international sales, Ascent intends to focus on near term European opportunities for medically focused products, leveraging Agrima’s extensive pharmaceutical relationships developed through Ascent’s European office in Copenhagen, Denmark.

You thought I’d forgotten about Denmark, didn’t you?

In Europe, Agrima ApS, a Danish company and wholly-owned subsidiary of Ascent, has submitted licence applications for a Wholesaler Dealers Licence and Controlled Drug Licence in Denmark, and applications for the approval of eight products to the Danish Medical Cannabis Pilot Program.

But the business model is not dissimilar, and Ascent has US exposure while Canopy does not/can not.