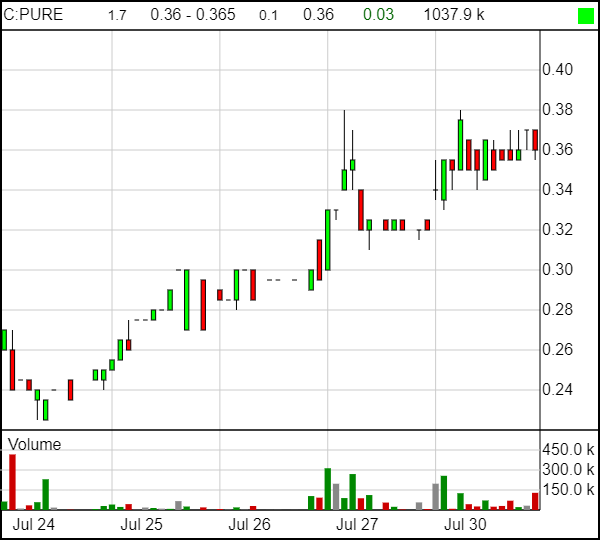 Another green day for Pure Global Cannabis (PURE.V): Up 50% in five days

I’m going to show you two graphs that, in my opinion, will leave you wanting to own a piece of Pure Global Cannabis (PURE.V).

The first one is interesting. The second is a freaking mindblow.

The guts of PURE’s appeal as a cannabis company is the phrase ‘multi-ponic.’ Yes, they have a license and a facility and it’s all beautiful and new and pharmaceutical in grade, and big deal, there’s 80 companies that can say that.

But how they’re looking to grow is interesting.

We’ve had plenty of ‘vertical farm’ weed plays over the last several years, and none have relaly played out for the reason that weed grows tall, so while you can sprawl strawberries outwards in giant wheels, such as the folks at Affinor Growers (AFI.C) are doing, the moment weed gets above a few feet tall, you’re no longer getting much ability to stack. Which means you’re no longer saving money on square footage.

What PURE is doing is reducing the horizontal spread of the plant canopy and instead allowing the plant to focus on the good stuff at the top.

Cannabis grows kind of like a Christmas tree, in that the lower branches spray outwards while the rest of the plant trails off as it grows taller. So your yield really comes down to how big those heads get, and how many you can fit close to one another before they start to get sick. 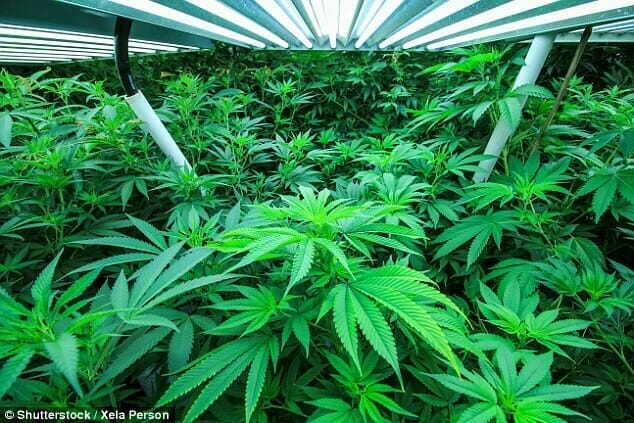 You can try to trellis things and move those lower branches upwards, but the plant is working hard to get nutrients to every leaf, and those bottom branches get to a point where they’re more stem than leaf, and more leaf than bud.

Multi-ponics, as seen in the graphic above, means trimming the plant as it goes, keeping its footprint slim, and letting the plant focus on that good stuff up top. 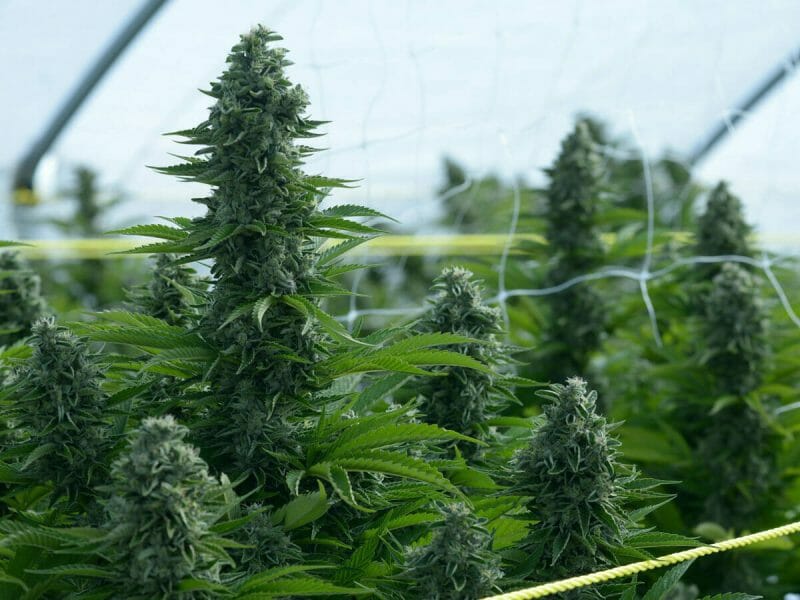 If the plant only has to focus on the up, and not the out, it can produce without working as hard. Maybe it can flower even faster than normal. PURE thinks so. 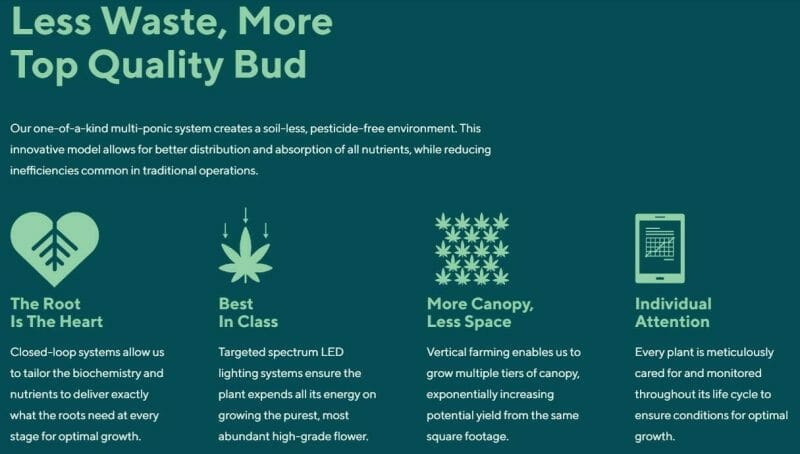 PURE says it can get 3x the usual yield.

Now, that claim is untested and a little broad. Pretty much everyone, for example, gets 3x the yield Organigram gets (if we consider the impact of product recalls).

But let’s say it gets 1.5x the industry standard; that’s immense.

The secret is to make the plant skinnier and taller, with no soil to help grow pests and infections, and a fat rootball the growers can see.

Of course, anyone can give that a shot, but PURE’s grower is not just anyone. He’s been working on novel ways to grow on an industrial scale for some time, and all over the world.

With a PhD in Plant Genetics & Pathology, Nader has managed large-scale grow operations for hundreds of plant varieties around the world.

And that’s all. I figured there’d be more out there somewhere, so I found an older bio with more details:

Nader Gheshlaghi, has a Masters in Ag. Eng. and a M.Sc. in Biotechnology from the University of Tehran. He has over 20 years of experience with thousands of indoor and outdoor species of plants, including cannabis, at both an industrial and academic level in Iran, U.A.E., Oman, Qatar, Holland, Belgium, Germany, Japan, China, and Canada. He is published, has several patents, and has received many accolades for his many achievements.

Not enough.. I want more still. So here’s his patents, two for green mold inhibitors, which will come in handy, and another for mushroom growing. https://patents.justia.com/inventor/nader-gheshlaghi

What does it mean if the 3x yield promise bears truth?

It means for every 20k sq. ft. of grow they fit out, they get 60k sq. ft worth of product, assuming their projections are on target.

That tech edge is worth something, but the market isn’t exactly valuing it – or wasn’t until this last week when PURE suddenly went on a five consecutive day green run, that’s seen it jump 50%, from $0.25 to $0.375.

That my seem, to some, like a run that’s been missed. Good for PURE, but what are the chances they ‘ll pull off the same trick?

Well here’s that second graph I was talking about: 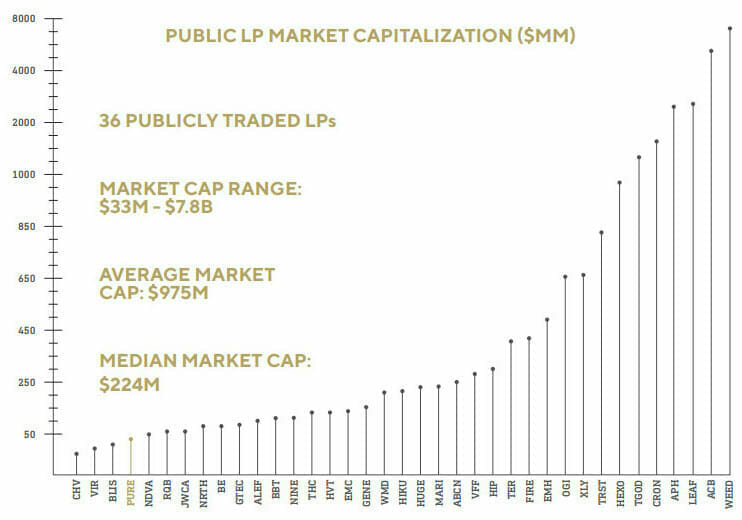 Frankly, if you think PURE is the 4th least important LP out of all of them out there, then today’s valuation makes sense and you should go eat a taco.

But, to me, a 50% jump in five days to bring it to $50m in market cap means there’s a LOT of potential upside here for an extended run.

PURE is not an Equity.Guru marketing client, but I’m a fan and have bought some, and I don’t expect to let go until it’s over a buck, be that soon or in time to come.

Still think this has legs to to to a buck? Seems like anonymous has unlimited supply of paper

I do. Holding a lot of that paper myself. Whoever’s burning through it, let ’em finish.

MJ’s are running whats happening with this one. Do you still hold?

In a big way. I think it’s undervalued, especially compared to peers.