Despite this – gold is stuck in a 3-month downtrend, as investors remain stubbornly transfixed on the surging U.S. dollar. 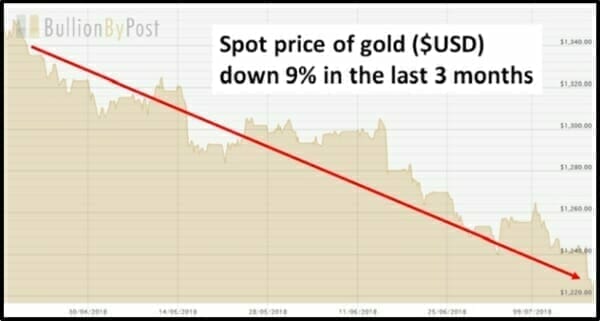 If so, which of Elisabeth Kübler-Ross’ 5 stages are grief are we now experiencing?

After sober reflection, we have self-identified micro-traces of the last 4 stages of grief.

And we’re not the only people who can not – or will not – accept the untimely death of gold.

McEwen pointed out that while gold futures have been pummelled, the junior mining ETF (GDXJ:NYSE Arca) has been mostly holding its own.

“Gold investors are frustrated with the market, but I think generalists are starting to see value in mining stocks,” McEwen stated in a recent Kitco Gold interview. “At some point, investors are going to start asking themselves where the earnings growth will come from and that will be from commodities. Now is the time to buy because there is real value in the market.”

One of those “value stocks” is an African gold developer Nexus Gold (NXS.V) that recently executed a 10-1 roll-back (share consolidation) – and then proceeded to chug higher. 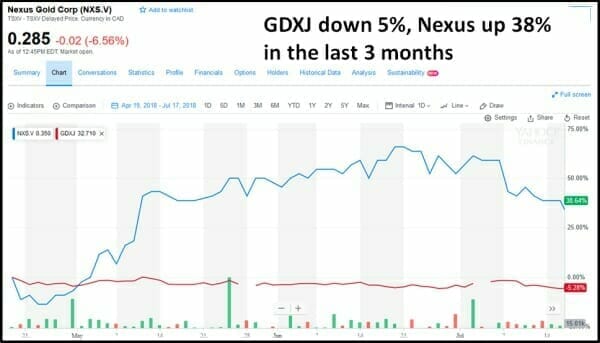 On July 18, 2018 Belgravia Capital announced that they had purchased a 7% stake in Nexus Gold.

A week earlier, Nexus Gold announced that it has retained Trapeze Capital to provide market-making services, following the rules of the TSX Venture Exchange.

According in Investopedia, a market maker helps keep the financial markets liquid, by “buying and selling quotations for a guaranteed number of shares. Once an order is received from a buyer, the market maker immediately sells from its own holdings or inventory of those shares to complete the order.” 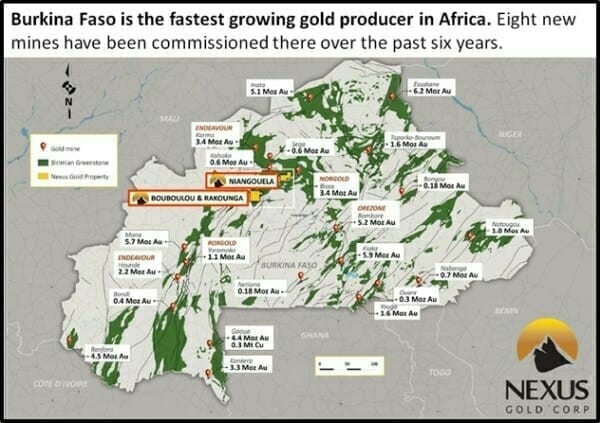 Nexus recently announced that Alex Klenman has been appointed the new CEO, and that J. Ian Stalker is joining the board of directors.

According to the press release, “Mr. Stalker has more than 40 years of development and operational mining experience in countries around the world, including over a decade working in West Africa.”

Stalker is a beast, as you’ll see, in this Metal News interview.

“Over the next 17 years, 170 million people will enter the middle classes every year from emerging markets, mostly in Asia,” stated the WGC.

It’s no secret that China and India love gold.

“I think there needs to be some consolidation within the mining sector,” stated McEwen, “A company with one project is going to struggle to be profitable. Strategically grouping two or three projects together makes sense and will create a lot more value for investors.”

Nexus Gold is a penny stock, in an underexplored African gold belt, with good drill results and super-star management.

For the last 3 months, as bullion has sunk, NXS has been buoyant.

Full Disclosure:  NXS is an Equity Guru marketing client, and we own stock.