Watching the price of bullion fall, it seems everyone who owns gold – wants to get rid of it.

Up higher, where the big money is sloshing around – you get the opposite impression.

Case in point: Lundin Mining (LUN.T) is trying to buy Nevsun Resources (NSU.T) – the 100% owner of a gold project in Serbia.

Lundin just announced that it intends to bid $1.4 billion for Nevsun, at $4.75 per share.

“This latest announcement from Lundin continues to ignore the fundamental value of Nevsun and its assets,” confirmed the Nevsun CEO, “The takeover offer represents only a 9.1% premium to the volume weighted average trading price of Nevsun’s shares over the 30 days ended July 16, 2018.”

We feel the same way about Cabral Gold (CBR.V) that owns the Cuiú Cuiú Gold Project located in the Tapajós Region in northern Brazil.

The Cuiu Cuiu asset is immediately adjacent to Eldorado’s (ELD.NYSE) 2.2 million-ounce TZ project which got its construction license in April 2017.  Eldorado is a $1.1 billion global gold developer with gold revenues of $84 million last quarter. 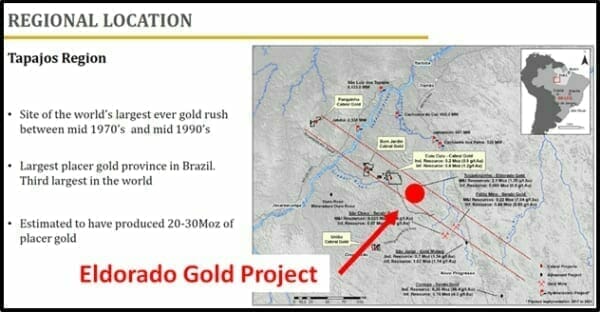 The feasibility of extracting it economically is still to be determined.

At this point, it’s a sizable question mark.

Cabral’s share price upside is the potential for the question mark to get smaller – until a bank or a hedge fund finally says, “Here’s the money – go build a mine”.

This month, the question mark is definitely shrinking.

The results included peak values of 18.7 grams per tonne of gold.

On July 19, 2018 Cabral Gold released initial sampling and exploration results from the Machichie Prospect, within the Cuiú Cuiú Project.

Initial results have highlighted a newly recognized mineralized trend with no previous drilling that is located only 500m north of the Cabral’s MG deposit. 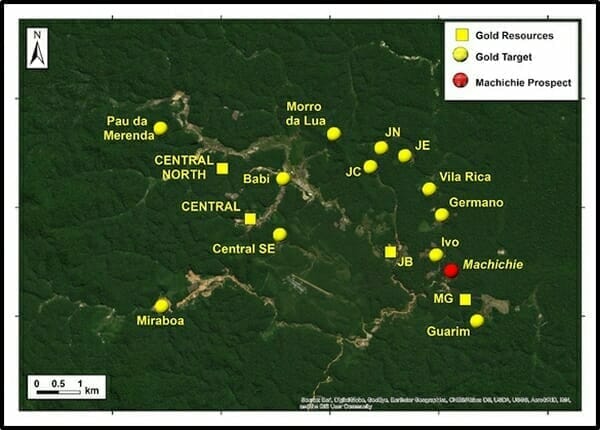 A composite grab sample of mineralized rock returned 336 g/t Au from a 1m wide quartz-pyrite vein in an artisanal shaft at Machichie.

Currently MG – just south of Machichie – has an Inferred Resource of 8.6MMt @ 1.45g/t Au (400,000 ounces of gold) The drilling at MG has been wide-spaced.  The deposit remains open at depth.

“Additional strategic drilling this fall will be targeted to better define high-grade shoots at MG in order to improve the gold grade, and thereby the size of the gold resource.”

According to the July 19, 2018 press release: “Any nearby resources outlined at Machichie would be expected to improve the economic prospects of MG.”

Artisanal miners were crawling all over the Machichie area during the Tapajós gold rush. The old gold workings extended over 1 kilometer along a valley system to the north of Cabral’s MG deposit.

These pits are now flooded, having been dug down to the water table.

In 2009, a single historical hole was tested below these now-flooded pits, returning 7.4g/t Au over 3.3m, approximately 50m along strike from the channel sample.

“Despite these initial strong results, emphasis at the time was on MG and no further work was done at Machichie.

A Drone orthophoto [see below] of the MG-Machichie Area shows the new discovery trend and historic drilling and sampling and the outline of the MG mineralisation trend. 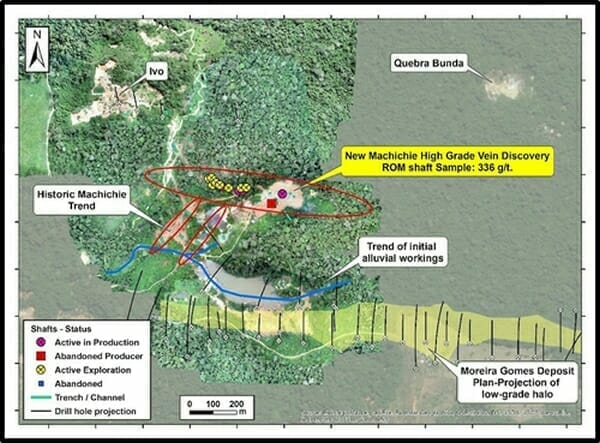 Four of the new shafts to the west have been accessed for sampling. Results of channel samples across the face of these western shafts were:

“The Machichie results are redefining our ideas of the variety of target styles that are yet to be drilled at Cuiú Cuiú,” stated Alan Carter, President & CEO, “Past exploration has focussed on the lower-grade stockwork-style vein systems. These new results highlight the potential of more discrete vein structures with exceptionally high-grades.”

Carter and his team will investigate further, using auger drilling and possibly geophysics.

There are 9.6 million ounces of proven gold in the Nevsun deposit, with a street value of  $11 billion.

Lundin chief executive Paul Connibear states the $1.4 billion offer represents a “significant premium to Nevsun’s unaffected share price prior to the announcement of our first proposal” in May.

Nevsun is telling its shareholders they are being hosed.

Cabral is trading at .25 with a market cap of $8 million.

One analyst we talked to today said, “The next Cabral resource could double on 2 dimensions alone”.