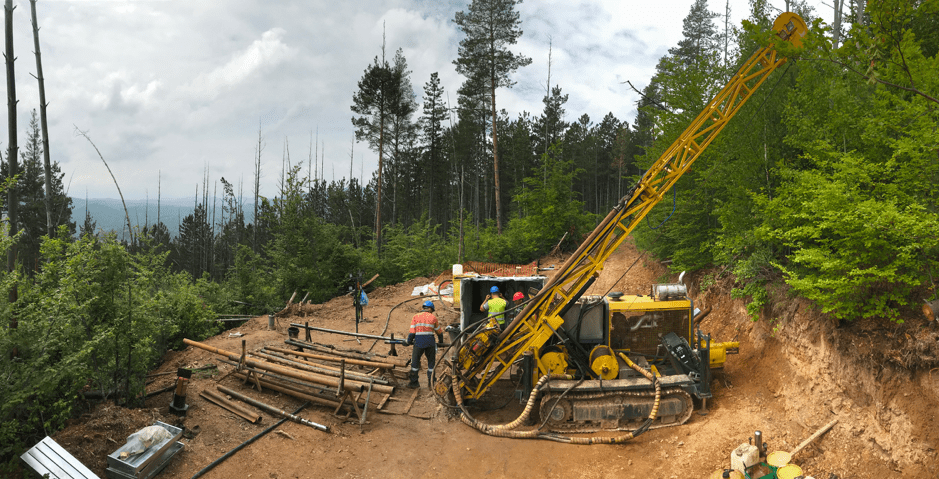 It’s lean times out there for those of us whose compulsion for penny dreadful mining stocks borders on obsession. A friend recently wondered aloud if it was possible to sue a company he buried himself in on the way down for emotional distress and trauma. Not for a material misstatement or fraud, but just because it didn’t come with a warning about the attached anxiety.

“You know, like those who file class actions against junk food manufacturers for ‘causing’ folks to get fat?”

There are definitely enough people crying to each other over the well-worn rockhead telephone grapevine to constitute an aggrieved class, but they all got distracted yesterday when double-barrel gold strikes reminded us what this compulsion was all about.

Now everybody parked in both Medgold (MED.V) and Adriatic Metals (ADT.AX) are rubbing their hands together, dreaming on what comes next, and the rest of us can’t decide whether to low-bid these things and have them get away from us, or chase the first bump and regret not having waited.

This area in eastern Europe – Serbia, Bosnia, etc – is highly prospective for porphyry and epithermal gold and base metal deposits. Much of this part of the world is under-explored, recent wars having been a contributing factor in some cases.

The map below gives you an idea of what’s been discovered thus far in this part of Europe. Some of the mineral deposits are truly world-class… 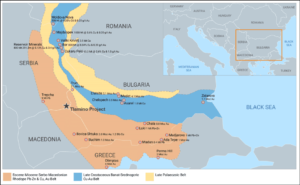 It’s a beauty. Right up top in the schists. Check it out: 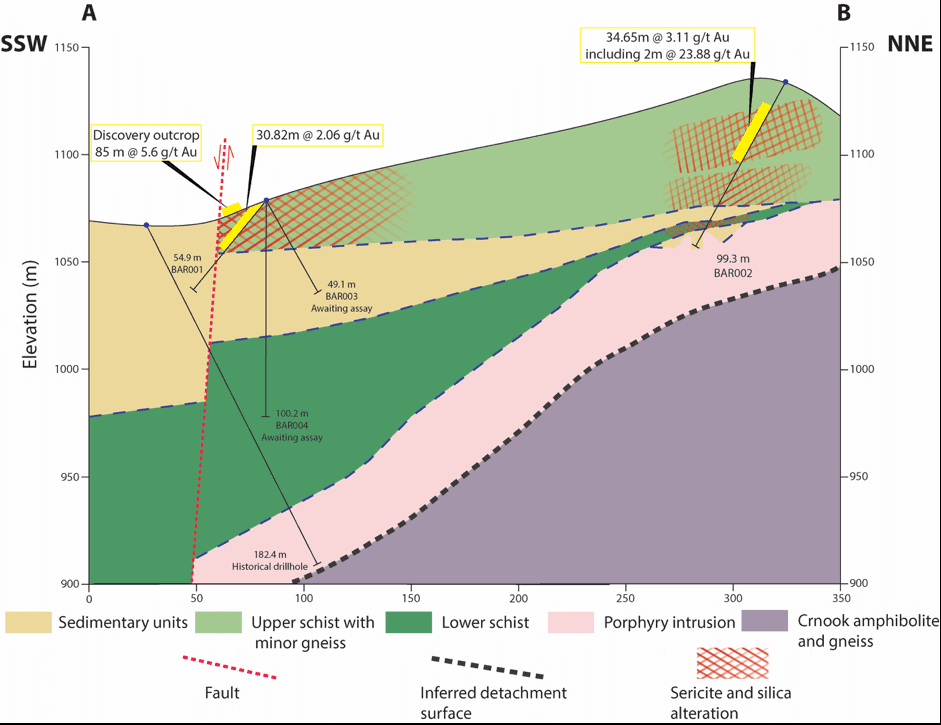 This was a ‘discovery hole’. It was drilled to follow-up some banger channel sampling results from their Barje Zone – 84 meters of 5.60 g/t Au and 105 g/t Ag – released eleven months ago, and it didn’t disappoint.

Commenting on these results, Dan James, President of Medgold, said:

We are delighted and encouraged by the results of the first two drill holes. We have shown that the mineralization exposed at the Barje outcrop extends at least 290 m to the northeast and is only covered by a few metres of country rock. Drilling is ongoing and is fully– funded by our partner Fortuna Silver Mines. The next several holes will continue to test the continuity of the Barje mineralized zone, as well as test the large geophysical chargeability anomaly located west of the outcrop.

YES, that is the THE Simon Ridgway, THE Dan James, and THE Brent Cook from Exploration Insights. Big fan here. (ED Note: obviously.)

I’ve been following the Medgold story for a few years now. It’s a good one.

A prospect generator seeks to minimize dilution and reduce exploration risk. The company will acquire a prospective property, run some preliminary exploration in order to better define the underlying geology (geologic mapping, geophysics, geochemistry, etc), then seek a joint-venture partner, often a much larger company with deep pockets, to help fund the most expensive phase of exploration: drilling and resource definition.

Typically, a prospect generator will give up a majority interest (50% to 70% being the norm) in the project in order to lock the partner in, limiting their expense as the project is brought further along the de-risking curve. These deals sometimes include cash and shares, but almost always include a commitment for the partner to spend x-amount of dollars on the project within a certain timeframe.

Medgold struck a partnership – a joint venture – with Fortuna Silver Mines Inc,(FVI.T) a miner with two projects in production, the Caylloma silver/lead/zinc mine in Peru, and the San Jose silver/gold mine in Mexico. The JV terms require that Fortuna spend US$3M over three years to gain 51% of the project, with an option to spend a further US$5M, plus produce a PEA (Preliminary Economic Assessment), to gain a total of 70%. 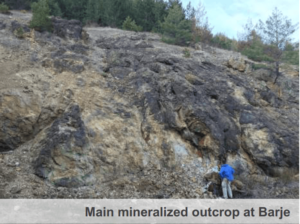 It’s nice when important geological cues/clues are sitting in full view, right on the surface.

These are early days. Aside from the handsome channel sampling assays…

… Medgold and its joint-venture partner have a fair amount of drilling to do before they can begin talking about a resource.

Two significant hits within 24 hours – what are the chances?

Let’s face it, there hasn’t exactly been a parade of discovery holes, or half-decent stepout holes, trotted out on the junior exploration arena stage in recent days. The fact is, there’s been a serious dearth of activity behind that curtain for more months than I can recall. 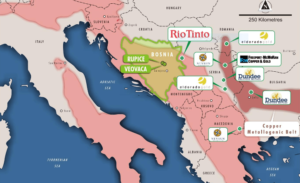 A few hours after MED’s discovery hole hit the wires, further along to the west in Bosnia, Australian listed Adriatic Metals Ltd (ADT.AX) released a real barn burner of a hole from their Rupice Project…

Sixty-four meters of gold, on its own, or any of the above metals in and of themselves, would have been significant. I haven’t crunched all of the numbers to see what a ton of the above rock might be worth, but the precious metals alone are good for US $481 per ton.

the results from BR-2-18 are exciting in a number of respects: firstly we have revealed the continuation of thick mineralisation on a 80m step out hole, which has the potential to add significant tonnes to any future resource; secondly we have assays confirming that this extension has grade continuity in excess of the exceptionally high grade precious and base metals content of BR-1-17, which make these some of the highest grade polymetallic results on the ASX. 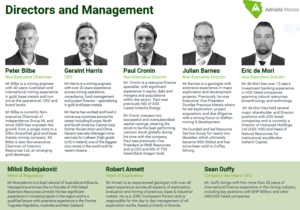 Solid team with a lot of experience. Nough said there.

The Project behind that barn burner of a hit:

This is not a new discovery. What Adriatic has is far more advanced than Medgold’s Tlamino project. 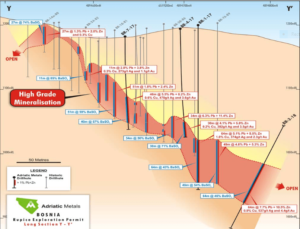 There’s been some discussion on some of the better online forums – ceo.ca for example – as to the potential strike length of this deposit, and its ultimate viability as a stand-alone project.

Here’s the thing: the grades at Rupice are excellent and the deposit is open for expansion, particularly at depth where metal tenor appears to improve significantly. It will not require a whole lotta tons to make this project work.

As with Medgold, who will continue reporting drill assays throughout the summer, Adriatic is busy drilling. The company is in the midst of a 15,000-meter program at Rupice. There is a lot more to come.

It’s hard not being excited about this one.

Both companies have reported significant intervals of mineralization.

Both companies are drilling.

Both companies are currently trading at roughly the same valuation: approximately $35M Cdn.

Medgold has a joint-venture partner funding their project to the tune of US$8M in expenditures and the tabling of an economic study for their end (up to 70%) – Should all of the conditions of the JV be met, Medgold’s interest would be 30%..

Adriatic owns 100% of their project.

Both companies stand to be generating substantial news-flow over the short to medium term.

Trading in both co’s is bound to become volatile in the days/weeks/months to come, especially as news approaches.

Postscript: Adriatic began trading overseas in Oz a few hours ago. Trading has been brisk…

Full disclosure: the author does not own shares in either company, but is considering making purchases in the near future.