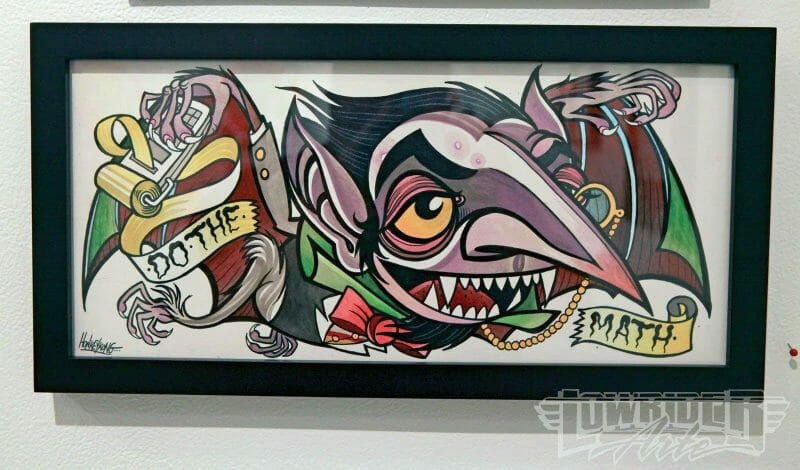 The Canadian Senate, in an apparent effort to seem relevant, is putting the screws to the long awaited passage of bill C-45. The CBC reports that as of 4pm EST on Thursday, the Senate was still adding amendments and the final vote was too close to call. (UPDATE: The Senate passed the bill with a stack of amendments. It will now be sent back to the House of Commons, before being changed again and sent back to the Senate in the world’s longest game of committee tennis.)

The most discussed senatorial amendment is one that prohibits pot companies from distributing branded apparel, and the usual suspect LP executives are weighing in on the injustice of not being able to distribute logo-branded baseball caps to people without any fashion sense.

Tantalus Labs’ Dan Sutton told the Canadian Press that branded items are a way to tell the official dope from the underground stuff. It’s one of the few weapons that hard working dope growers like him have in their constant fight against the powers of darkness:

“Black market cannabis is likely to continue to be prevalent … we need all the weapons we can get,”

Sutton has a natural ability to make a discussion about what he wants it to be about, and in this case we thank him for bringing the retailization conversation around to it’s core.

Assuming the bill passes, the question most relevant to investors is: “How is the flicking of this particular switch going to affect the markets available to these pot companies, and what can we expect that change to do to their sales volume?” Naturally, this is difficult to figure out, but that isn’t going to stop us from looking.

This one was a surprise.

What kind of volumes are being done now? 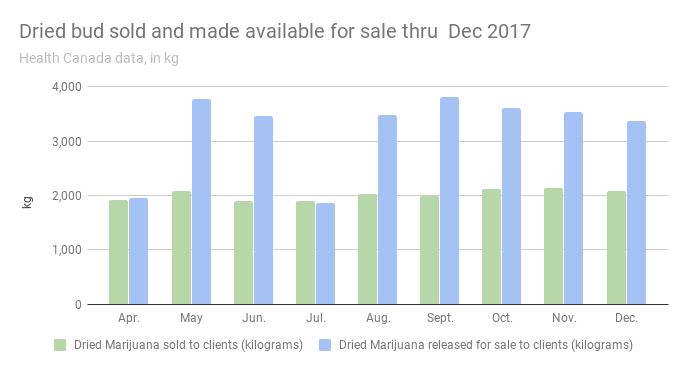 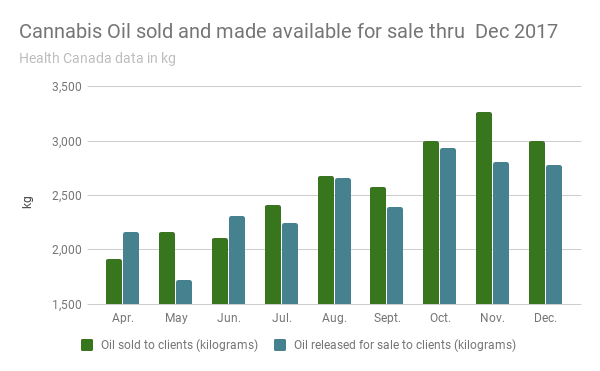 Health Canada’s data through December of 2017 has Canadian marijuana consumers consuming 2,000 kg of legal, LP-produced weed per month, steady. Oil sales are making a good case for a plateau around 3,000 kg per month.

For the sake of simplicity, we’ve taken the delivered and paid for product, and converted it to equivalents of dried bud. That should give us an idea of this current total market from the supply side. 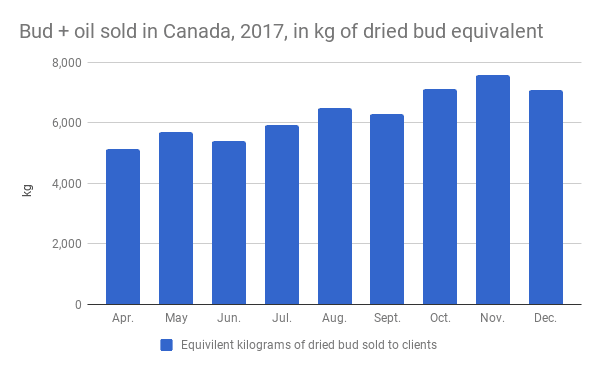 All of the bud reported to Health Canada as having been sold by licensed producers in 2017.

Looks like between 7,000 and 7,500 kg per month of legal weed moving through Canada, at the last count.

What kind of volume can we expect?

Because of ongoing federal prohibition, the marijuana business in the United States is governed individually by the states. This condition causes individual markets that evolve in vacuums, and that makes for handy, undisturbed sample populations that yield all kinds of great data. They all track different things (or, rather, track the same things differently), which is a mixed blessing, because it makes it harder to get nationwide data sets, but gives us different sets of statistics to compare Canada to.

Colorado doesn’t publish unit sales, just the gross from those sales. They do publish the gross sales from the medical and retail trades. And here they are: 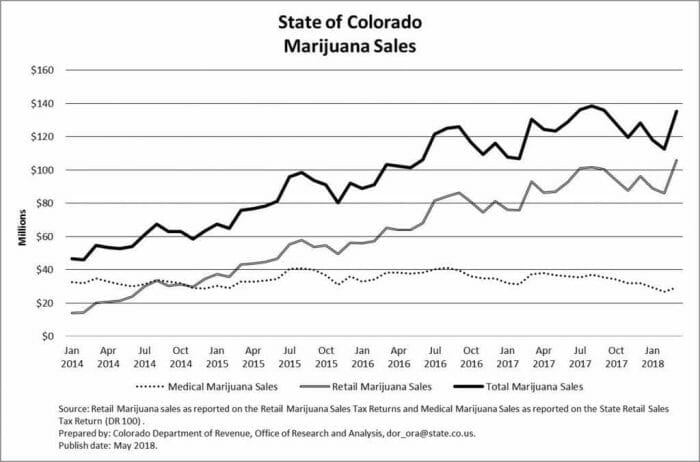 Gross sales from medical and retail marijuana trade in Colorado.

This data doesn’t give us an idea of the number of units being moved, but since the price didn’t fluctuate too much (no more than 10% from quarter to quarter, and about 30% between the extremes), it’s safe to use the trend-lines of Colorado’s state-wide gross as an indication of how the medical /rec split ends up working out when a jurisdiction legalises marijuana for adult use.

The medical market is quite clearly a flat line, and the retail market begins to pull away at the end of 2014. Colorado’s adult use market appears to start robbing gross from the market for medical use in 2017, right around the time the trend line for retail marijuana flattens out. We note here that April 2017 is also the beginning of the Health Canada data set showing a flat trend line for dried bud.

The Washington State liquor board hosts a series of beautiful, granular data sets about their retail marijuana market, but quit adding to most of them in May of 2017 for reasons unknown. Like Colorado, they’re focused on the gross revenue and tax revenue from the operation, but they also did publish unit numbers both of the individual licenses and as a state-wide number.

Note that this chart ends earlier than the chart of Colorado’s total gross, but we do see that familiar plateau towards the tail. Nobody knows why Washington quit publishing this data, but it may well be that they didn’t want to show a declining trend.

WA continued to publish the gross sales and tax data, but only grouped in a fiscal year, and fiscal year to date. Note: The WA fiscal year ends June 30th. The chart below was collected from the Washington state liquor board June 7th 2018. It is unclear whether the figure for the 2018 fiscal year contains the totals for the month of May or not. We can safely assume that this 2018 represents at least 10 months of revenue.

Incomplete as it may be, both state-level data sets show a market plateau in 2017, and Washington State throwing the unit data down the memory hole amid declining gross hints at a decline. That is the type of action one might expect from a saturated market.

What’s the saturation point, and how saturated is the Canadian Market?

There have been attempts at estimating the saturation point of marijuana markets with estimations of patients and smokers, but that’s a messy, noisy way to do it. It’s reasonable to assume that the population of users as a percentage is a constant between Washington State and Canada, so we can just use total population to estimate the rate of consumption. 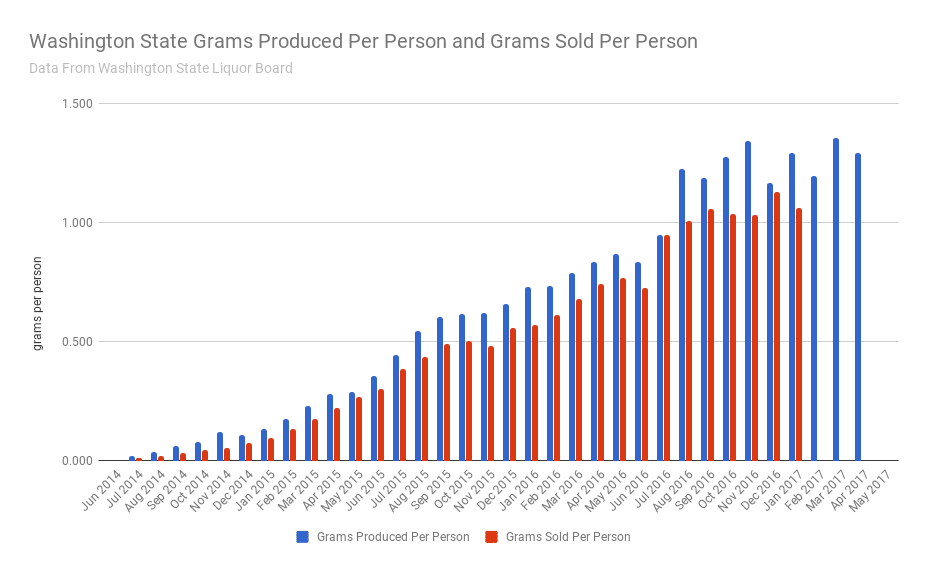 Washington state per capita marijuana sales, and you can hold off on the comment flood please because yes I adjusted it for the growth in population.

In an uncommon natural simplification: it looks like Washington started to plateau around ONE gram per person per month before they took the data away.

How does that project north?

Canada’s ACMPR legislation allows for patients who are registered to legally buy marijuana. Since the government keeps track of the numbers of those patients, we can do some easy arithmetic to see how much the registered users are consuming. 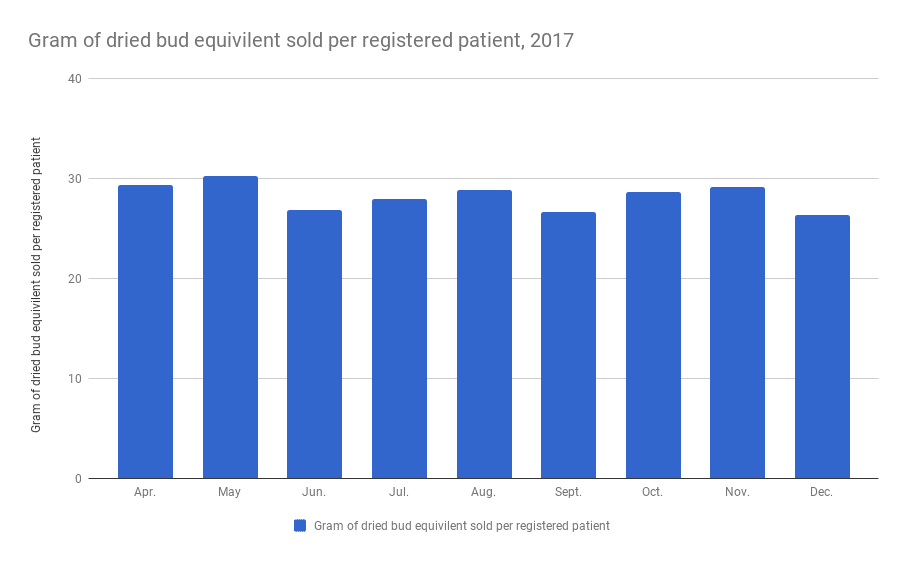 An ounce per person per month seems sort of high. Not everyone is chronic. Though, technically, since we’re only counting medical patients here, I suppose they are.

Research activities this evening involved purchasing some marijuana at a Downtown Vancouver dispensary, for research purposes. Our research subjects did not ask us to show proof of a prescription, just offered a selection of bud and asked how much we wanted. That was just as we expected, and same as it ever was.

The marijuana in that store front location likely didn’t come from Aurora or Canopy, but it sure doesn’t look like it came out of some pesticide-soaked dirty garage, it’s nice stuff. This is the bud that comes from the black market that Dan Sutton is looking to eradicate and replace with product from licensed operations. If in fact he and his peers are successful in their displacement, and assuming that the medical market remains unchanged… 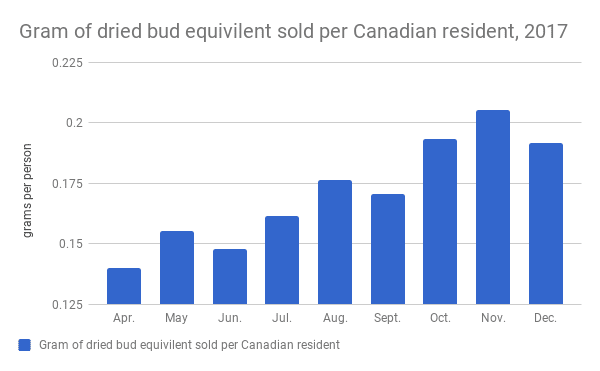 They’ve got a long way to go.

We started these calculations under the impression that the pending legalization was something of a technicality and from the consumer’s perspective, we still believe that. The difference in Canadian cannabis consumers pre and post legalization won’t be significant. Access is clearly available for more than just medical purposes. Adults in Canada who want to use cannabis do, and as much as they want.

The difference is going to come down to the market share that the newly knighted defenders of the marijuana supply’s purity can pry away from the forces of darkness.

This would be a lot easier if we could compare like periods, but Health Canada’s latest data set and Washington State’s discontinued one don’t overlapped in grams sold (and only overlap for 3 months in grams released for sale). But working with the assumption that the plateau that happened in Washington is a regular population’s market saturation, we can average the plateaued amounts and subtract the Canadian average to get an idea of what to expect in post-legalization room for growth. 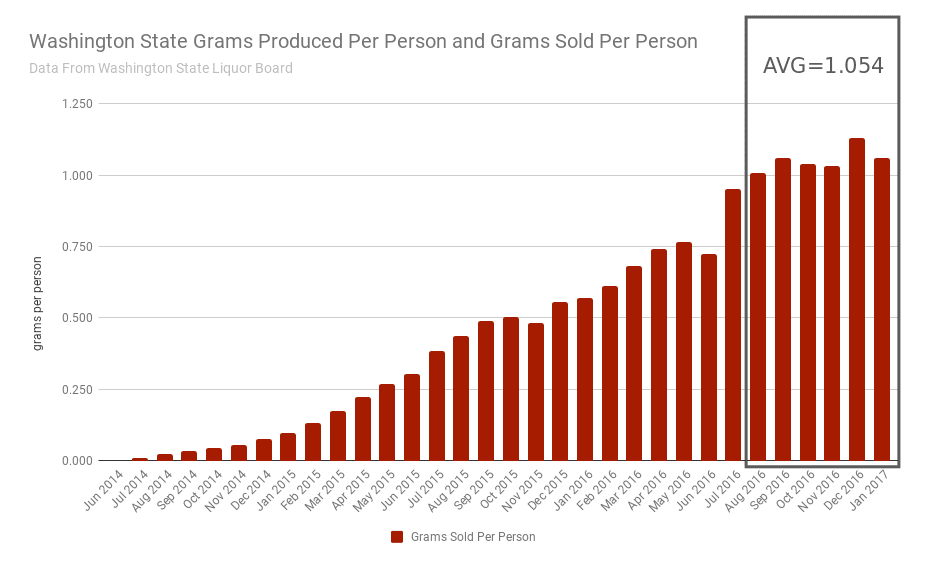 Average gram per person in the plateau is 1.054

If y’all click “I agree” on the disclaimer that says you understand that this is supposed to be a like period comparison in terms of both calendar periods and length of periods, but isn’t, and promise not to send nasty emails, I’ll tell you that the average of the three month plateau at the end of Canada’s 2017 was 0.197 grams per person. 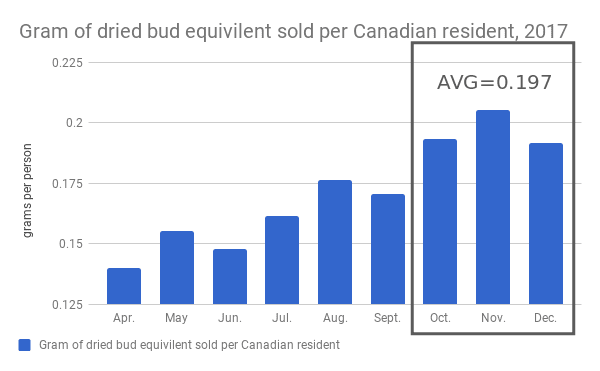 In other words, Canadian LPs are going to be given an opportunity to supply 31,700 more kilograms per month to displace the current Canadian marijuana market, assuming that is as saturated as Washington State was at the end of 2017.

For a look at what it’s going to take to get that kind of product, how the inventories figure in, and the long awaited drill down on the burgeoning retail landscape – keep it locked right here on Marijuana Datajam.

(feature image of The Count by airbrush artist HonkeyKong, comes courtesy of the Lowrider Network, who were covering a Sesame Street themed gallery to raise money for the pediatric department at cancer hospital, City of Hope.)