First thing people started asking me this morning, while I was still wiping my eyes and finishing my chai late, was: “EEK! TGOD is running a $25m bought deal! The stock is down! What does this all mean? What if it starts going backwards now as people sell their stock to buy into the financing?”

But then, this story told in two emails.

Things to understand about why this financing is a great thing: 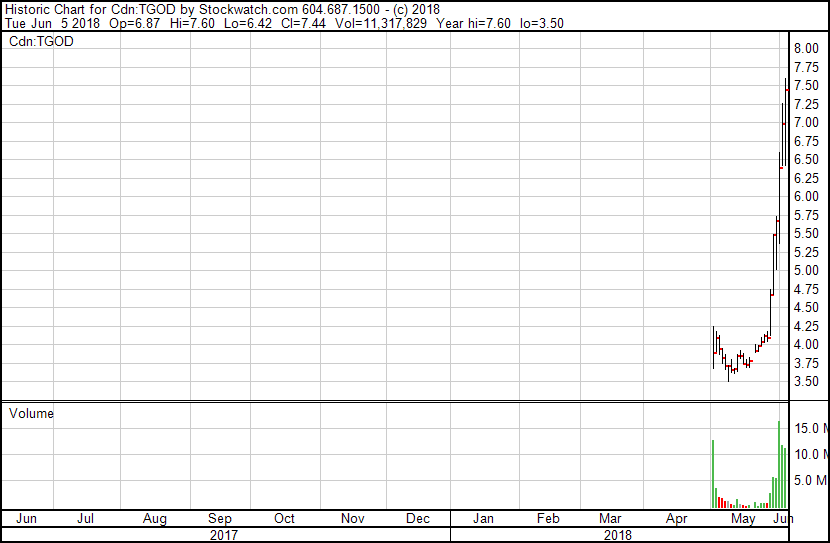 Obviously, but here’s the thing: It does so at a valuation 5.4x what it was on that first financing we pointed you guys to.

That stock chart shows what’s been a full week of trade volume of 5m shares or more, with over 15m shares moved on one of those days. That’s massive amounts of trading, certainly enough to deal with any sell off that might come six months after the IPO date by our guys who bought in for $1.15.

Fill in your forms, send TGOD your cheque, and get your stock certs ASAP. Every $10k you send in is basically worth $35k in stock right now.

And those who bought in at the IPO and are sitting on $7 warrants? Nearly time for you to bust out the cheque book too.

UPDATE: TGOD has just announced (literally minutes after I posted this story) they’re accelerating the warrants from that $1.15 round. This means you’ve got until July 6 to execute them or lose them forever.

TORONTO, June 05, 2018 (GLOBE NEWSWIRE) — The Green Organic Dutchman Holdings Ltd. (the “Company” or “TGOD”) (TSX:TGOD) announces that it has elected to accelerate the expiry of the certain warrants (the “Warrants”) of the Company issued under the Warrant Indenture dated March 24, 2017 (the “Warrant Indenture”) expiring March 24, 2019 pursuant to the $1.15 private placement that closed in March 2017. The Warrants will now expire at 4:00 p.m. (Eastern time) on Friday July 6, 2018. Each Warrant entitles the holder to purchase one common share of the Company at a price of $2.15 per share.

What this means to the company is a MASSIVE cash injection. What it means to investors is a massive bump up in the number of shares out.

But when the company is raising money near a new high to buy new things, which presumably will bring more value and maybe revenue to the story? That’s a raise I wouldn’t be too scared of.

FULL DISCLOSURE: TGOD is an Equity.Guru marketing client, and the author owns stock and warrants in the company. Also, last week when the stock hit $7, I said on social media it might be time to take some profits. I have not changed my tune on that. I don’t care what company you’re dealing with, and how great they might be; if you’re up a double, or triple, you take some off the table and live a better lifestyle going forward. This advice served us really well in early January with just about every company in the sector, including many we really liked. Invest smart.