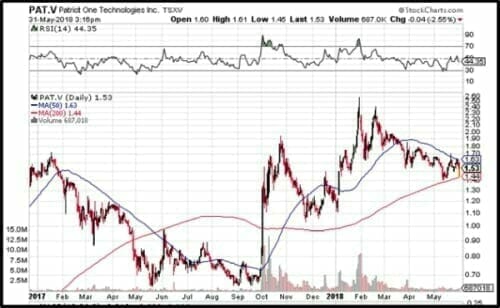 Canaccord remains bullish, with a $2.50 target.

“The May 31, 2018 release hinted at some partnership developments which were referred to as being in advanced discussions,” wrote the Canaccord analyst.

We continue to model a material ramp in revenue in F2019 though we have trimmed our near-term forecast as the company continues to emphasize “getting it right” as opposed to rushing out a half-baked offering.

“Product development continues to march forward,” added the analyst, “though a fully commercialized solution still seems to be months away.”

This last point is the rub.

Patriot One is not a brand-new company, and some investors are getting itchy for the “fully commercialised solution”.

We have been tracking PAT for about a year and a half. 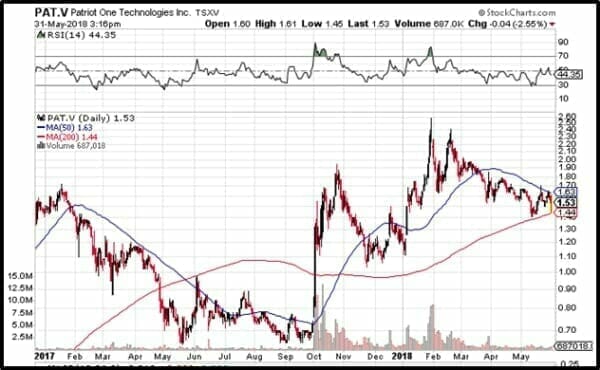 As you can see from the above chart, we’ve been through good times and bad.

Nobody is going to deny that the U.S. has a gun violence problem.

Crazy voices make headlines: “Arm The Teachers”, “Pornography Causes Gun Violence” “Kids are Dying Because Schools Have Too Many Doors”.

But amidst the irresponsible, shrill voices – saner ones are emerging.

Steve Bullock is the governor of Montana.   It’s a state with a lot of guns. 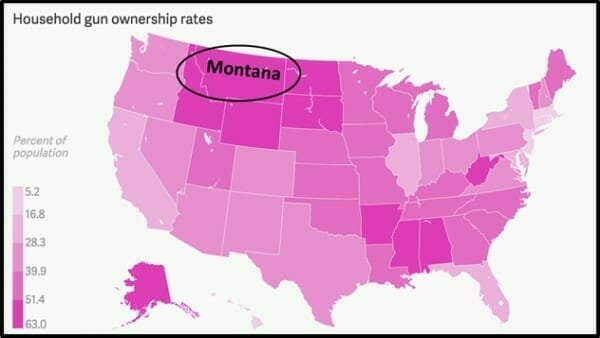 In a May 31st, 2018 USA Today Op-Ed, Bullock explained his special relationship with guns.

“In the spring of 1994 I learned my 11-year old nephew had been shot and killed on a playground by another student in Butte, Montana,” wrote Bullock. “Jeremy Bullock was the unintended victim of what was, at the time, our nation’s youngest schoolyard shooting.”

There are 22,000 suicides and 13,000 homicides involving guns each year. Literally hundreds of thousands of parents and loved ones have felt the way I felt since that day in 1994, and how I feel to this day.

We need to work towards a society where mass shootings and schoolyard deaths are not only illegal, they are unheard of,” continued Bullock, “Arming teachers is absurd…thoughts & prayers are not solutions. They are excuses.”

Bullock states that the issue of U.S. gun violence will require a measured, multi-prong approach.

Surely, one of these prongs should be employing non-intrusive weapons detection technology to tell us who is packing – and what they are packing. 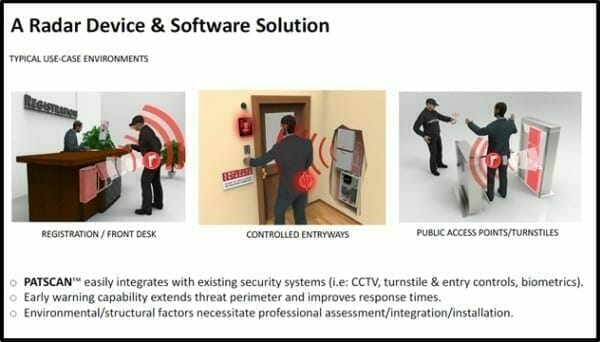 Last month, the Patriot One team visited both the legislative and executive branches of the U.S. Government in Washington D.C.,” wrote Cronin, “to share information on our PATSCAN CMR concealed weapon detection radar device and software solution.”

We picked up PAT stock all through 2017.  We could bail out now with a useful profit, but that is not going to happen.  Why? Because (for once) we agree with Canaccord.  PAT is going higher.

We also happen to think this technology is going to save children’s lives.  Using the diamond-hard metrics of wealth-creation – that’s not a reason to own the stock. But as a kicker – it has value to us.

But they’d never tell you that.

Full Disclosure: Patriot One is an Equity Guru marketing client, and we own stock.