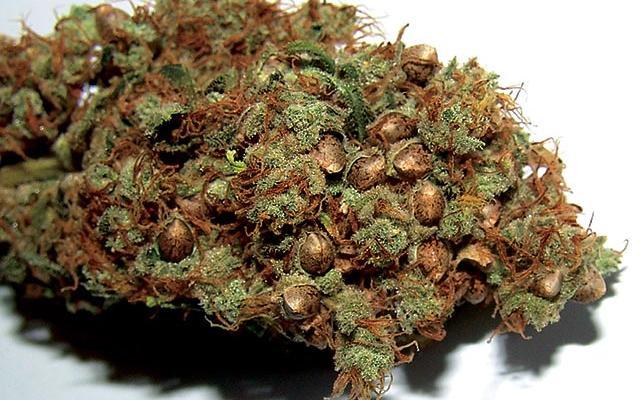 Big Board on Rails

Is Bloom Season Over? Pot Market Shows Signs of Going To Seed

First Quantum Happy To Leap Back into This Reality

On a morning that the Globe and Mail’s business pages bring you the federal government’s condition-free guarantee to pipeline company Kinder Morgan along side news of the CEO of former crown corporation Hydro One Mayo Schmidt complaining about being his company being used as a political football in the Ontario election, Equity Guru is a lot more interested in whether or not a few people leaving the pot party means it’s over or not.

And we’ll get right to it after we tell you about CN Rail straight CRUSHING it.

Despite being downgraded by both Deuchebank and Goldman Sachs, a persistent backlog and lagging freight growth, Canadian National Railway Co (CNR.T) was the largest trader in Toronto today by dollar-weighted volume. CN was up $2.52 to close at $106.35 (+2.43%).

CN has been a frequent punching bag in both traditional and social media, as they’ve run fewer cars and contributed to reported backlogs in wheat and petroleum. A widely-syndicated Bloomberg Article has been making the rounds again. It blames the company’s backlog for low bitumen netbacks, crop failure and everything short of a plague of locusts. It’s inability to increase rail traffic has been the bane of the Canadian economy’s existence. So what gives? 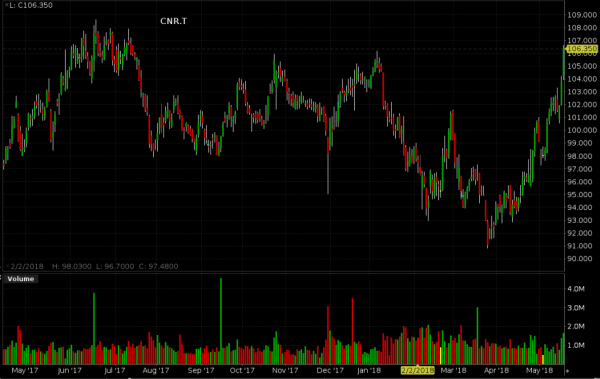 CNR shareholders think they should get dragged in the press more often.

The people from $77.5B CNR presented at the Merril Lynch Transportation conference today in Boston. Seeking Alpha republishes the 7 (seven!) slide deck that they used to show a room full of transportation analysts that they weren’t quite shipping the volume they used to, partly because they aren’t running the cars as quickly, and that they’ll get to the never-ending stack of angry but highly valued customers as soon as they’re able. 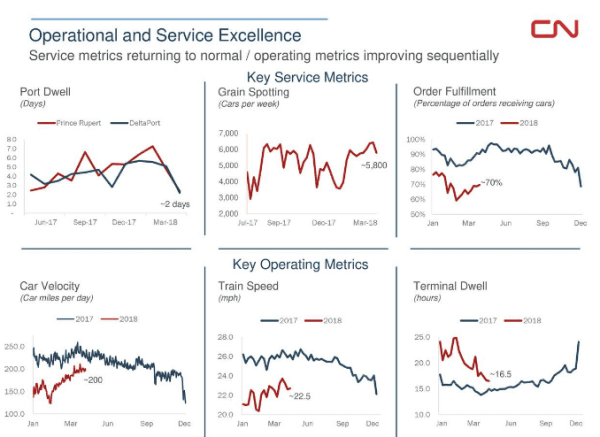 CN Rail is experiencing higher than normal shipping volume, but your carload is important to them. Please continue to hold…

Late great financial analyst Richard Russell, author of the much read Dow Theory Letters came up in a world when rail transportation meant everything to the economy. The WWII vet didn’t believe in any move that the Dow Jones Industrial Average made unless it was confirmed by the Dow’s Transportation index. The reasoning behind the thesis was that it was easy for investors to get ahead of economic growth or recession in the economy and send the DJIA one way, but that stuff had to either be shipped or not be there to be shipped. It was up to the RAIL index to let us know what was happening when it happened. The world is a bit more complicated now that a lot of the American economy doesn’t require transportation, but an export economy like Canada is bound to remain frozen in time.

While today’s CNR action could have been short-covering, it sort of feels like the sharks who trade transports took one look at the largest rail company in Canada, running trains slowly and carefully to move a deep backlog, all the while expanding their network and wondered what Deuchebank and Goldman were on about.

The DJ at The Pot Party Is Running Out Of Records

Between TRST getting beat up after going to the well like it might be their last chance and the industry’s most efficient pot producer Medreleaf (LEAF.T) taking an all-stock offer from the industry’s most prolific paper producer Aurora Cannabis (ACB.T), there are abundant signs that the party is slowing down. The music’s still bumping and the cops aren’t here yet, but the society pages types are leaving. Anyone who came alone and hasn’t got a phone number yet had better get to it.

Former EG client Invictus MD (GENE.V) was in our inbox this morning announcing an option to buy a package of cannabis cultivation properties in BC – one that has yet to be licensed and another one that has yet to be built – for $10 million in cash and stock. The move would have surely got everyone’s attention a few months ago, and last fall Maple Ridge would have been giving them the key to the city. Today the market straight up shrugged at GENE, sending it down $0.05 (-2.78%) on 253k shares. About 1/3 of its average volume.

Invictus’ management team has a deep marketing background. Both CEO Dan Kriznic and VP of Marketing and Communications Larry Heinzlemeir are veterans of successful US trade school operator DeVry Universities, and BC trade school operator Eminata Group – both of whom owe their success to heavy advertising pushes driving enrolment. Eminata drew controversy in 2013 as a series of lawsuits claimed that its Canadian schools were not as advertised, and a BC MLA leaked an email from Vancouver Province reporter Cassidy Oliver, who was looking into the matter, to Eminata’s founder. It’s unclear if Kriznic or Heinzlemeir were working there at the time.

The relentless marketing that fuels the commercial university business lends itself well to parody
.
Invictus’ big-splash marketing push was able to bring the biggest rock and roll superstar of 1975, the one and only KISS front man Gene Simmons into the fold as Chief Evangelist. The ageing rocker, more recently notable for his A&E Reality Show Family Jewels (cancelled in 2012), took a part-stock payment at a deemed value of $1.97/share when he was announced on March 14th. It’s unclear if the company changing its symbol from IMH to GENE was Simmons’ idea or management’s, but we note that it screwed up the charting in everyone’s tracker and makes the company sound like a biotech deal.

Simmons’ position is down 11% since he came on in March. A Seeking Alpha profile on Invictus, published today, gives the company an aggressively lukewarm “neutral” rating, which makes us wonder why they bothered. 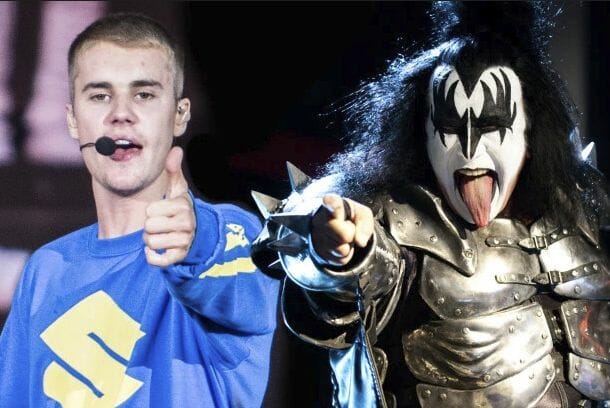 A once popular vocalist whose best production and peak commercial appeal are long behind him, and on the right Invictus MD Chief Evangelist Gene Simmons.

Could God Make A Tax So Big Even HE Couldn’t Pay it?

Toronto copper producer First Quantum Minerals (FM.T) was on the move today, trading 6 million shares to close up a dollar at $22.00 (+1.04%). The move is the latest part of a 13% 7 day run that comes on the heels of the government of Zambia, where First Quantum has operated since 1996, reminding the world that they have assessed FM $8 billion in back taxes. First Quantum first reported the tax assessment back in March, and the news sent its stock reeling, losing 14% in a day. After going sideways for a while, FM has gained it all back and more. They’re now trading near their 52 week high. 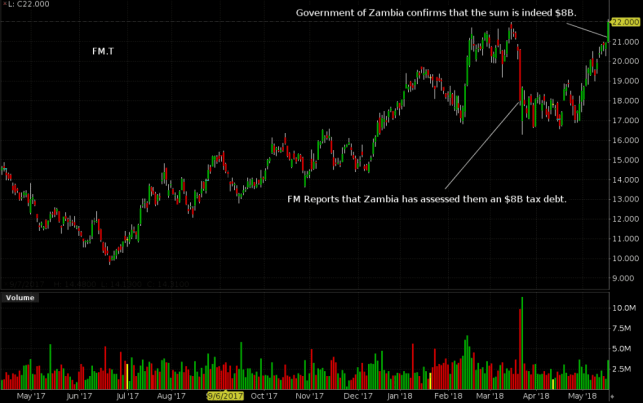 First Quantum Minerals, not trading like a company who might have to cough up $8b to keep the largest copper mine in Africa.

Clearly, the market is sceptical that Zambia will be able to collect on an assessment that amounts to more than half of FM’s $15B market cap, and isn’t pricing FM as though its Zambian operations will be nationalized.

Title should read “May 16th”