The rock hound in me loves Cobalt. How could one not appreciate its complexity, its magnetism, its ability to withstand extreme temperatures (up to 1100°C)… its luster, its brilliant blue oxidized hue?

It’s an absolutely essential metal in the production of EV (electric car) and electronic device batteries. It’s used as a binder. It lends strength, enhancing the battery’s capacity to endure high concentrations of power in such a confined space.

Perhaps you already knew this, but smartphones use approximately eight grams of cobalt. The battery for an electric vehicle uses significantly more – over 1,000 times that amount.

Mining Review tells us that the cathodes of EV batteries are currently composed of approximately 30% nickel, 30% manganese and 30% cobalt (lithium makes up the rest).

Containing roughly an equal ratio of nickel (30%), cobalt (30%) and manganese (28%) as well as lithium (12%), NCM cathodes are appealing to electric vehicle manufacturers mainly due to a low self-heating rate which improves the overall safety of the battery in use, as it lowers this risk of over-heating.

There’s been a fair amount of talk recently – some rather large talk – about how developers and manufacturers are on the verge of rolling out a whole new line of EV batteries. Batteries that push the nickel component to 80% or more, dropping cobalt to a mere 5 or 10%.

Some say that cobalt is pricing itself out of the electric vehicle market.

Analyst price projections vary, but the common theme is one where the price of cobalt drops – hard – as these new designs pull the blue metal out of future battery designs.

Hmmm, think I’d put more faith in the divinations of this guy…

I find most market analysts, you know the ones – those snappy answer types all propped up in front of the camera donning slim fit Armani’s and cobalt blue ties – to be out of touch, heedless of the underlying dynamics that determine an ultimate outcome. Sometimes they’re accidentally right.

Newbies take note: it’s critical to solicit more than one point of view on ANY market before taking your frustrations out on your online trading platform.

Marc Grynberg CEO of Umicore, a leading supplier of materials for electric vehicle batteries, explained in a Reuters news report recently that while the industry is attempting to develop batteries that incorporate higher nickel content, it’s NOT possible to take the cobalt out.

“If you increase the nickel proportion, you reduce the stability of the battery and so it has an impact on cycle life, the ability to charge it fast,” Grynberg said.

It sounds like reducing the amount of cobalt in batteries compromises performance, the life of the battery, not to mention safety risks. Somehow, I doubt EV carmakers would be willing to roll out tens of thousands of new vehicles stacked with twitchy battery packs. Looking at the current price of cobalt… 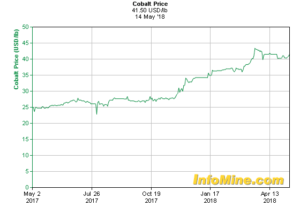 It would seem that the market agrees with Marc Grynberg.

The Cobalt Supply Side:

Cobalt production presents a moral dilemma for carmakers and consumers alike. It’s a story that you’ve likely already heard, but it bears repeating. It’s a problem that won’t go away. It needs to be handled with firm political, industry and consumer resolve.

The Cobalt Demand Side:

There are a number of headlines I’ve come accross recently that speak to the market’s insatiable appetite for the shiny brittle metal:

Volkswagen, anxious to secure its battery supplies for its big push into the EV arena next year, announced a doubling of its electric vehicle battery contracts to $48 billion.

China, already the worlds largest cobalt consumer and potential world leader in the production of electric vehicles, is pulling out all of the stops in order to secure cobalt supplies.

There’s also rumblings that China is in the process, if it already hasn’t done so, of cornering the global cobalt market.

“If cobalt falls into the hands of the Chinese, yeah you won’t see EVs being produced in Europe etc. They are waking up too late … I think it’s because the car industry has never had a supply chain problem before.”

On the cobalt market as it currently stands, Anthony Milewski, a Russian billionaire who began stockpiling the metal in 2015, had some choice words for Bloomberg: 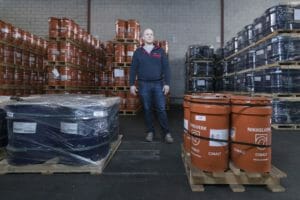 “If you tried to go out and buy 3,000 tons of cobalt today in the spot market, you’d need a telescope to see the price,” said the 37-year-old billionaire from his office in Zug, Switzerland.

That’s what one would expect someone buying cobalt by the barrel to say to the press but, hey, he isn’t wrong.

From Zug Switzerland to Cobalt Ontario:

Canada Cobalt Works (CCW.C). This is one of the better cobalt exploration stories I’ve come across in the sector. It’s positioned in the Cobalt Camp of Northern Ontario. Mines scattered all across this prolific mining camp produced in excess of five-hundred million ounces of silver and over thirty million pounds of cobalt in the 1900’s. 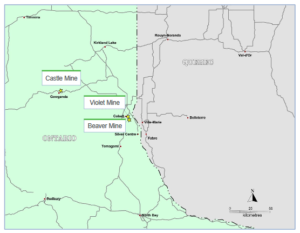 I’m guessing Cobalt, the town itself, was a real groovy locale back in the day… 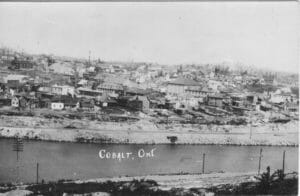 Canada Cobalt is run by Frank J. Basa, P. ENG. His resume speaks for itself…

The Castle Mine was one of the highest grade silver and cobalt producers in this historic camp.

The three original shafts at Castle are still there, intact… 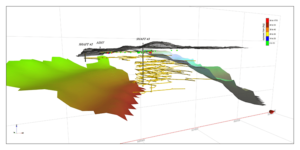 Earlier this year, the company took a mini underground bulk sample from the Castle mine.

Then, on March 16th of this year, the company released another bulk sample consisting of thirty-five kilograms of material from the floor of the first level of the mine.

Interesting note regarding the above sample: the native silver – some 66 grams of the stuff – was separated from the bulk of the material. It later underwent a metallic screen fire assay which produced a head grade of 818,254 g/t (26,307 ounces per tonne). Small sample. Big result.

Notable among CCW’s other assets, the Beaver Cobalt Silver Property.

The Beaver property, located near the town of Cobalt, consists of one single 20-acre patented mining claim.

In 2013, a 20 kg hand-cobbled sample from a nearby waste dump returned assays of 7.98% cobalt, 3.98% nickel, and 1,246 g/t silver. Not too shabby for material that was tossed on the scrap heap. Equity Guru’s Lukas Kane talks about the potential latent value in this discarded surface material in his latest offering.

Management has begun permitting work with the aim of constructing a 600 t/d mill at the Castle property.

The mill ties in with a technology CCW owns the rights to: Re-20X

Re-20X is a proprietary metal separation process for the efficient extraction of cobalt from rock, and the recovery of Co from spent batteries. Recycling cobalt… that’s gotta be worth a closer look.

CEO Basa has brought on, as a special advisor, one Dr. Ron Molnar to assist in developing the Re-20X process. From the company’s March 16 press release:

Canada Cobalt’s proprietary Re-2OX process for cobalt battery metals is being optimized at SGS Lakefield in southern Ontario. Dr. Molnar has designed, built and operated over 60 pilot plant circuits extracting, separating and purifying a wide range of metallic elements from cobalt to rare earths, and he will be one of the key individuals who will assist Canada Cobalt in taking Re-20X to the full pilot plant stage in 2018 with client specific cobalt formulations for the battery sector.

GGM has a ‘rolling start’ plan to process high-grade gold from its Granada Gold Property just over the border in Rouyn-Noranda, Quebec.

This dual-purpose mill should prove to be a win-win for both companies.

The pace at which mining companies operate can often be measured in geologic time. The wait for permits, assays, etc can be vexing. But CCW is moving things along, steadily.

CEO Basa and his team continue to work underground at their flagship Castle Mine. Rehabilitation of the underground workings will lead to a drilling campaign in the near future. I’ll be watching that one with baited breath.

Cobalt is on a tear. This current price action may be sustainable. I very much doubt new battery technologies will succeed in knocking cobalt off its throne.

There’s an EV revolution sweeping across the globe. Canada Cobalt Works’ strategic position – its prospective geological setting, its management team, its Re-20X processing technology, its upcoming underground drill program – should put a spotlight on the company, and its shares, in the weeks and months to come.

Full Disclosure: The author does not own shares in Canada Cobalt Works.