Renaissance Oil (ROE.V) gets Spec Buy nod from analyst, “could be worth multiples”

Renaissance Oil Corp. (ROE-X) is “blazing the trail for shale development in Mexico,” according to Canaccord Genuity analyst Jenny Xenos, quoted in the Globe and Mail’s weekly analyst roundup this week.

Xenos has initiated coverage of Renaissance with a “speculative buy” rating.

“Renaissance has assembled an impressive team to take advantage of the opportunities in Mexico. Its team includes key members of the former Mitchell Energy technical team that ‘cracked’ the Barnett shale in the late 1990s. The company’s successful approach sparked a shale revolution in North America and has since been widely adopted by the energy industry worldwide.

As a result of this success, Mitchell Energy was sold to Devon Energy for US$3.1-billion, and its team went on to build a track record of success in establishing and developing shale plays around the world. Interests of the team are aligned with those of shareholders through share, option and warrant ownership. Renaissance insiders, including board members, management and the technical team, own 60 million shares of the company, representing 21.4 per cent of current outstanding share.”

Renaissance piled into Mexico when that country finally opened up its oil reserves to foreign companies recently, and grabbed some nice pieces and are producing currently. Recent financials showed the company to be producing and selling $6.4 million worth of crude in Q4.

They’re not alone down there – billions of dollars from some significant players have come to Mexico looking to help liberalize the former state-monopolized oil patches where more than 72 billion ‘barrels of oil equivalent’ are believed to lie, both onshore and off.

Xenos calls it a “high-risk/high-reward” opportunity and set an $0.80 target.

“Should unconventional drilling be unsuccessful, we estimate the downside to the stock could be 5 cents per share, as the value of the company’s conventional assets is minimal,” the analyst said. “Should the team, however, be successful in proving the economic viability of its shale resource, we think that the stock could be worth multiples of its current valuation. It is for this potential upside that we recommend buying ROE.”

Worth noting, on TipRanks, which follows analyst calls, Xenos has a 90% success rating and a 32% average return on her picks.

The company said in its recent quarterly filing, “The fourth quarter of 2017 was a landmark period for Renaissance and LUKOIL, where the partnership embarked on the drilling of its first well in Mexico and initiated the field evaluation program at the Amatitlan block in Veracruz, Mexico. The Amatitlan drilling program has been very active into 2018, including the drilling of nine new wells targeting the shallow Chicontepec formations, of which six have recently been put on production and three are currently undergoing completion operations. Drilling of the 10th Chicontepec well has now commenced. The operations team has incorporated new drilling and completion techniques to Mexico, thereby reducing costs and time to bring new wells on production. Renaissance has also completed workovers and repair operations on five wells of a scheduled six-well workover program.”

Renaissance Oil (ROE.V): Don’t look now but oil is on a run, and Mexico is opening up

As Brent Crude prices keep surging, oil and gas is coming back into vogue among investors, but the low cost to produce in Mexico is making that country an important focal point of the sector. 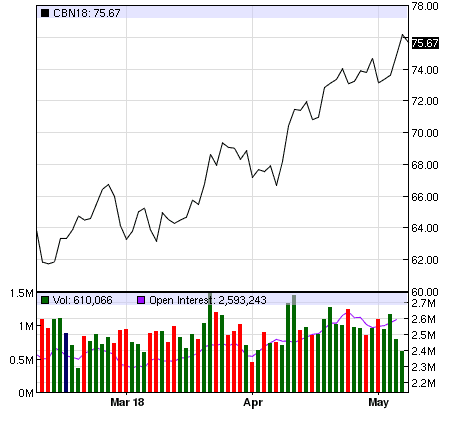 International Frontier Resources (IFR.V) is also in Mexico drilling at the moment, having reached total depth on their first evaluation well this week. The TEX-10 well hit a total of 2,453 metres in total vertical depth.

Further auctions of Mexican oil leases are due to be offered through the summer.

FULL DISCLOSURE: Renaissance Oil and International Frontier Resources are Equity.Guru marketing clients and the author owns stock in both companies.