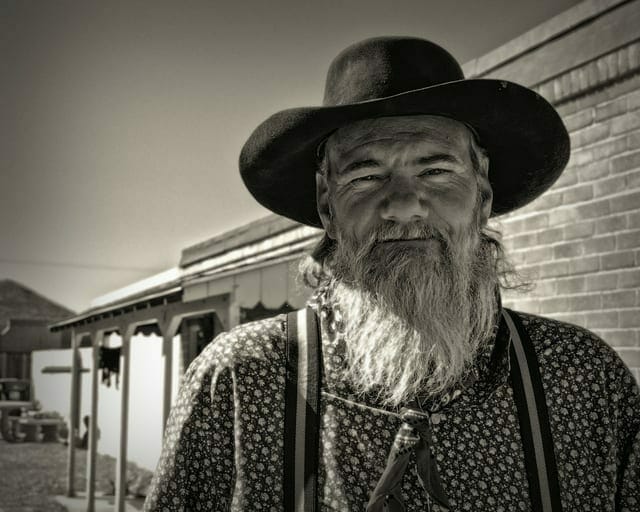 Here’s What Happened May 3rd

Here’s What Happened May 3rd:

The Globe and Mail reports that every taxpayer’s favourite defence contractor Bombardier (BBD.B.T), sold off its Downsview, ON property today. After a drawn out public sweepstakes between a bunch of developers including Li-Ka Shing, The Federal Public Services’ pension plan bought the sprawling airplane factory for $550 million. No word yet on when they plan to level it and make condos, or what the people who live in those condos are going to do for a living. Bombardier has decided not to sell its Turboprop business, possibly after the only ones taking a serious look were more interested in the land, and will instead partner with Airbus on commercial jets over 100 passengers.

This column snoozed through the Loblaw Companies earnings report yesterday because it seemed significant, but it turns out the real action was at the AGM. The Financial Post reports that a bunch of do-gooders from Vancity Investment Management Ltd., submitted a shareholders proposal at the AGM that called for Loblaw to examine the concept of paying its employees a living wage. In this case, a living wage would be a wage that is set based on typical expenses in the locality that the job exists. The Post calculates a Metro Vancouver living wage at $20.91/hr.

The proposal wasn’t to pay Loblaw workers a living wage immediately or even at all, just to examine the feasibility of doing it. Shareholders effectively laughed the proposal out of the room with a 97% “nay” vote, probably as they tried to convince each other to explain to the people from VanCity how the grocery business works, just for yuks.

Loblaw CEO Gaelen Weston told the trouble-making shareholder that the company considered matters of fair and sustainable wages in the grocery sector “…a national policy question.” And he’s got a point. Last July when Loblaws publicly griped about how much minimum wage hikes in Ontario and Alberta were going to hurt them, it came off pretty tacky. 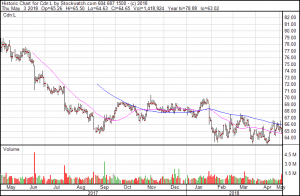 At a $24B market cap Loblaw scans like a company playing not to lose.

Yesterday’s HWH carried mention of a Globe and Mail item that had Medreleaf ringing up Aurora to ask for a friendly chat. We remarked at the time that we considered LEAF a flat out operator, and that their solicitation of an offer from Aurora would be an act of impatience. LEAF called for a trading halt this morning to let everyone know in as few words as possible that they don’t make a habit of talking about those sorts of things but, if you must know, they do have discussions with other cannabis companies every now and then, including Aurora. Now could they get back to work, please? LEAF.T finished up $0.47 on the day to $22.25, (+2.2%).

MedreLEAF, further along the buildout curve than Aurora, has just over half of the Enterprise Value.

If strategic press leaks were in the LEAF playbook, you’d probably see them in the business pages a lot more. Aurora, whose effective option on 10% of TGOD keeps them in the press plenty, never met a microphone they didn’t like.

Deadwood Dullards Dusted Up, Not Yet Dead

The top volume trader on the TSX Venture today was Mineral Mountain Resources (MMV.V), who did 5 million shares to fall $0.225 (-37.5%) and finish at $0.375, giving back a nice, steady climb that they’d been building since March. 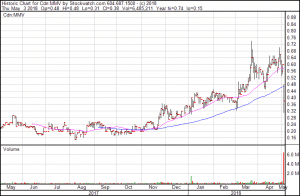 MMV.V, fell down a mine shaft Thursday.

The Vancouver based explorer is working on a formerly operating prospect in the Black Hills district of South Dakota. The deposit is in the Homestake gold camp, and you can really tell, because it seems like it’s all the company ever talks about. The Homestake Mine was instrumental in the development of the Hearst fortune, and produced gold in various (mostly large) quantities from 1876 until 2002 when a low gold price closed it.

Perhaps playing to a shareholder base who knows exactly what the Homestake mine is, and will never understand why HBO cancelled Deadwood after only 2 seasons, MMV has been walking this thing up from $0.28 in November on a steady average of 200k shares a day as they built anticipation for the drilling of a deposit that’s right next door to Homestake. It’s a former operator with historical gold reserves, and the company’s communications of that fact have the feel of an email from a crazy uncle. Full of passion, believe what they’re telling you… but just not coming across clean. 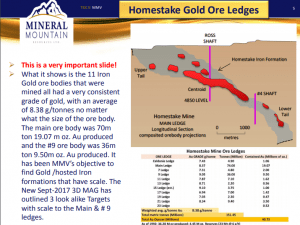 Slide 5 of the MMV Presentation is VERY IMPORTANT, and is labelled accordingly.

Their website is full of clunky design and link loops that don’t go anywhere, but that didn’t matter to a whole generation of classic gold bugs who would rather mentally count their share of the next Hearst fortune, and let their grandson deal with the computer machine. Come to think of it, it the gold bug crowd probably loves this deck.

The MMV.V buckling came after the company put out a news release which, in terms of both composition and distribution, was nothing short of a disaster. We had to go hunting for the release itself, which wasn’t carried in our news tracker, has yet to be filed on SEDAR, and at the time of this writing still does not appear on Mineral Mountain’s website. The news itself wasn’t even all that bad. The three holes they drilled all hit host mineralization, and even had decent, though not world-beating grades.

But the release was difficult to follow, repeated itself, mixed current and historical results, and referred to images posted on the company website which do not exist (you could practically hear them saying “go to double you, double you, double you…”). The company may have been unaware that it’s possible to include images in a news release, or link to the images themselves… provided they exist.

Full Disclosure: The author owns more of this turkey than he would care to admit, and explained his displeasure with the company’s messaging in an email that Mineral Mountain has not yet returned. Presumably, the veteran gold explorers over at MMV.V are familiar with the concept that venture stage equities are only ever as valuable as the price the next shareholder is willing to pay for them, and may do well to consider the fact that those notional future shareholders grow in numbers by a function equal to how easy their story is to understand.

Mineral Mountain has 9 holes to go in this program, and won’t be caught wasting any shareholder money on proofreading.