There are two blockchain deals I really wouldn’t want to be playing with right now, and for two different reasons.

The first is RIOT Blockchain (RIOT.Q), a company which is facing multiple class action lawsuit investigations.

The second is Glance Pay (GET.C), whose board of directors are going to the mattresses in their proxy battle against family member and former deal steerer Penny Green and her team.

This situation is getting ugly.

Glance rocketed fast as the blockchain sector did likewise in late 2017. Starting out as a restaurant payment app that I couldn’t get to actually work, it took on some blockchain heat at just the right time and the stock went to heaven. 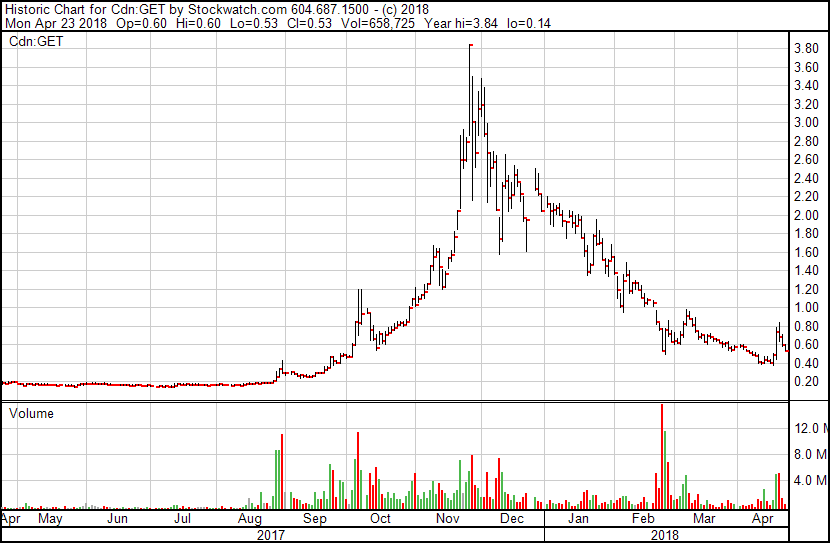 The problem with a run like that is, folks who have escrowed stock start counting their wealth before it vests, and when that hot run inevitably cools, the wealth that never actually existed starts being missed. Inevitably, someone has to take the blame.

Green, her sister, and her brother-in-law were running the show during the good times, throwing high fives and holding parties and watching financing roll in.

When those times went bad however, so did the family and business relationship. Green was cast asunder, and a boardroom battle took shape.

Glance Technologies Inc. has received a shareholder meeting requisition from Penny Green, a director and former officer of Glance.

When times are good, we can all see past our colleagues’ issues. But as so often happens when a deal catches a big wave, everyone at Glance started counting each other’s money, and the boardroom went pop when the founders reportedly decided to stop spending money on investor relations, a facet of the business that Green oversaw.

When she made the case to investors that having no IR was a dumb move, they countered with:

Well played. To that point, there’d been bruises but no blood. A little chess, not too much back alley diplomacy. But when you talk to people in the middle of the battle – the Glance shareholders – it was a little unclear who was winning.

The popular consensus has been, for the most part… nobody. The stock has crumbled to a low, as happens during times of boardroom uncertainty, and the battle was doing nobody any favours.

So Green put up a website aimed at telling her side of the story at https://www.glanceforward.com, and the board responded by going all David Baines on Green and her team in a series of pointed news releases.

Moreover, Ms. Green claims a record of business success in her Feb. 21, 2018, news release, but she omits reference to many of her past ventures. According to public disclosure reviewed by Glance, Ms. Green has served as a director and officer of five publicly traded companies other than Glance. On average, the share price of these five companies declined by 50 per cent during her tenure on these boards.

Welcome to the Venture exchange, lads. Frank Giustra has a pretty similar track record, by virtue of being in the public markets startup game, where the losses can be total but the wins can be a counted in multiples.

Between 2007 and 2011 the Vancouver Sun’s now-retired business columnist David Baines made mention of Ms. Green repeatedly (in 11 columns) in the context of going-public transactions in which she (or her law firm) was involved as a filing solicitor. This coverage is notably absent from Ms. Green’s disclosure, in which she claims to be “highly sought after by media outlets.”

A lawyer being mentioned as representing a client doesn’t mean that lawyer shares the client’s crimes. Jeffrey Dahmer had a lawyer, who also represented Larry King and baseball Hall of Famer Reggie Jackson.

So all of this has been very petty and gross, but the board apparently aren’t done yet: In fact, they’re putting out some pretty dark shit, digging through divorce records and the like to cast aspersions on former colleagues who, until a few month ago, they were welcoming as friends – when share prices were headed skyward.

Glance Technologies Inc. has cautioned shareholders that they need to know more about the Vancouver businessman Hugo Kotar before deciding who to support for the board of directors of Glance. Mr. Kotar is not a dissident nominee for the board. But Mr. Kotar is important because of his business association with dissident nominee Spiros Margaris and dissident leader Penny Green. Given Mr. Kotar’s past, the association raises questions about the due diligence Mr. Margaris and Ms. Green performed.

We love a good scandal here, but Holy Mary on a pogo stick, this is basically going after a mosquito with a Mack Truck, and burying parties who are only related by association is pretty horrible business, which is why we’re not linking to the document concerned.

Kotar shows up often on Green’s Instagram feed, so they’ve laid him out as an acceptable target. Hell, even the mafia draws the line at wives and children.

Equity.Guru has had business dealings with Kotar – on Glance’s behalf, at that. Half the financiers and stock promoters and banks and brokers in town have done business with Kotar and/or Green. It’s a fact of life that, if you’re putting together a stock deal in Vancouver, you’re one degree of separation from someone who has butchered a puppy on a stack of BCSC trading bans.

In fact, the current Glance Pay board, if they’re being honest, were one degree of separation from Kotar themselves for quite a time while their paper wealth was accruing, so if Green’s ability to do due diligence is under question, so is theirs.

Anyone who knows Green knows she has a particular way of driving value for companies she’s built/promoted/invested in. If you’re invited to a Green investor party, you’re as likely to catch an attractive wife as an attractive deal, as an example. But the rocket-like ascendancy of Glance’s stock wouldn’t have, and couldn’t have, happened if not for Green’s ability to burrow into Vancouver’s investor scene and dig fat cheques out of a wide variety of pockets. Additionally, those pockets remain available to her because she generally returns fatter cheques to them four months later.

Glance was, during the Green reign, vastly overvalued, which is one of the reasons we didn’t write it up often (and, in fact, wrote about it negatively early on, drawing the ire of others involved in the deal that the Glance board wouldn’t dare dragging in the fashion they’ve dragged Kotar).

The tech is fine, but the business of penetrating restaurant payment systems is, to paraphrase Hunter S. Thompson, “is a cruel and shallow money trench, a long plastic hallway where thieves and pimps run free, and good men die like dogs,” so we didn’t play.

But now that’s all they have. Some tech, some early stage pilot deals, a stock chart that looks like a relief map of Mount Kilimanjaro, a sector that it’s not nearly dug into enough to catch a second wave, and a boardroom battle that is making everyone involved look like someone to stay clear of for a few years.

If Green takes back the company, it’ll promote hard but bear the stigma of what just went down, and what’s been alleged. If the board staves her off, where does it go from here? Who will ever hitch themselves to their wagon again, knowing that they’ll shit-kick them – and everyone they deal with – on the way out the door?

Added to the financial issues are the family issues; how does this clan ever talk to one another again?

Realistically, there’s only one way forward for this operation; they need to drop their weapons, suck down their egos, rejoin forces, and look to either rebrand, or sell the company.

Until that happens (and unless that happens), I can’t see how GET can be a good buy going forward.

FULL DISCLOSURE: We talked to both parties about their engaging Equity.Guru for marketing services, both before and after the boardroom split. We have not engaged for either side. We do not own stock in GET, we do not have business operations with Penny Green or GET, and though we have talked about working with GET in the past, this has not come to fruition. This article takes nobody’s side but that of the shareholder, who is receiving no joy from either party currently.