During the day, it’s a noisy, bustling hive of foot traffic.

At night, it’s silent – except for the constant hacking and coughing of my neighbours around the courtyard.

In a minute I’m going to explain how these hacking Chinese urbanites have destroyed China’s zinc production and how you can profit from it. 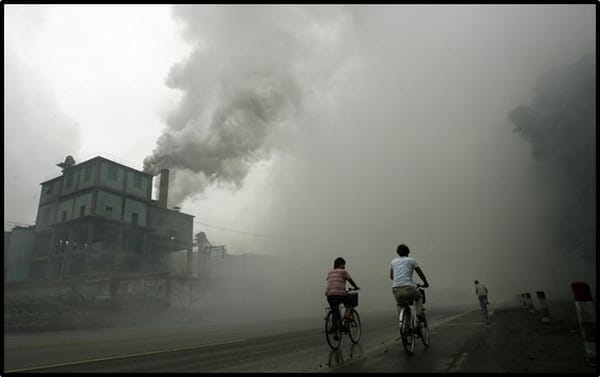 But first – let me fill in the back story so you understand this isn’t a surface ripple – it’s a tidal shift.

The 2.5 PMI index measures the really harmful pollutants – the ones that get down into the lungs and never leave.

The World Health Organisation says anything above 40 is unhealthy. 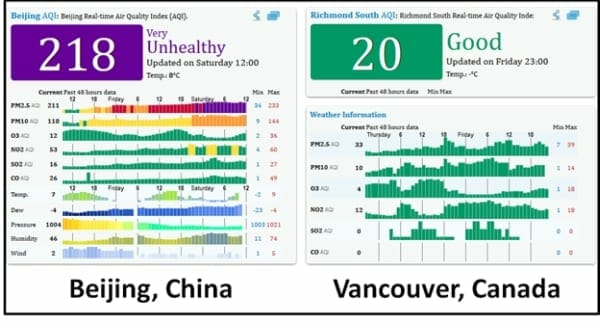 At this moment – in real time – the pollution is 11 times worse in Beijing than my hometown of Vancouver, BC.

But here’s what might be: today is a “clean air day” in Beijing.

The normally ubiquitous gas-masks are gone.

Take this to bank: the Chinese government is motivated to reduce pollution.

No, they’re not gong to quit coal over-night.

No, they’re not going to forbid the swelling middle-class to purchase SUVs.

They are going to do what they can do, without derailing the economic train.

Example: In 2017, 60% of zinc mines in Sichuan province were shut down after failing inspections from the Environment Protection Unit.

Zinc is used to galvanize steel or iron, against rusting. 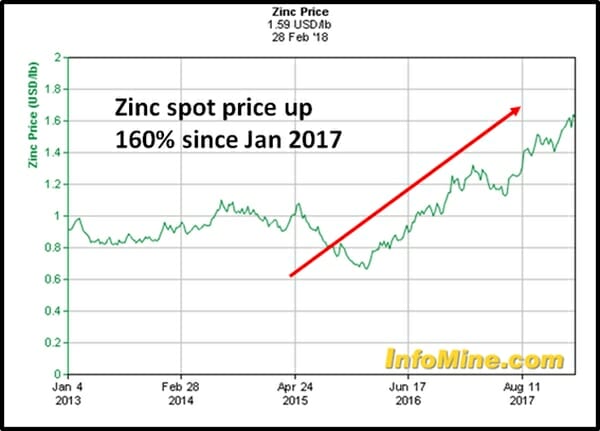 Main transmission lines and a hydroelectric power generation facility are both within one mile of the property.

Seaports, rail and trucking routes are all accessible. It’s a three-hour drive to the Oakland port. 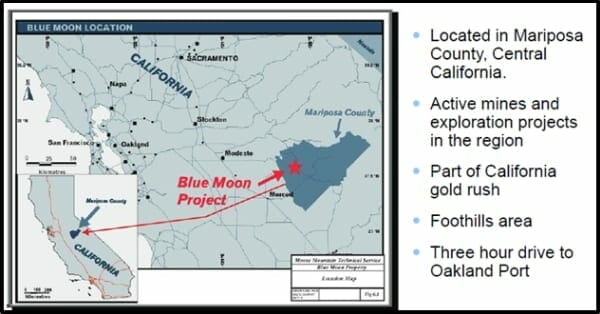 On October 2, 2017, MOON announced an updated NI 43-101 Mineral Resource estimate announced which saw a 20% increase in the indicated zinc resource to 377 million pounds of zinc.

There was also a 23% increase in the inferred zinc resource to a total of 395 million pounds of zinc, using a 4% zinc equivalent cut-off grade.

Last October, Blue Moon engaged a Reno Engineering firm (MDA) to begin a Preliminary Economic Assessment (PEA) of the Blue Moon zinc project in the foothills of California. Completion of the PEA is expected Q1, 2018.

In 2015 MDA co-authored a 2015 feasibility study for the Soledad Mountain mine in Southern California that went into commercial production the next year.

“We are confident in MDA’s experience to develop a high-quality technical report that will provide our shareholders with a preliminary analysis of Blue Moon’s economic potential,” stated Blue Moon’s CEO Patrick McGrath.

The updated Mineral Resource estimate is being utilized in the PEA.

A PEA is often a precursor to a bankable feasibility study. At that point things get real. The story-telling stops and the bean-counters take over. Assume, for the sake of argument, your mine has a capital cost of $100 million.

The bankable feasibility study will calculate the risk of the lender losing all or part of the $100 million.

That risk calculation is one of the reasons veteran mining men avoid countries with unstable governments or weak mining jurisdictions.

If an election result could torpedo your mine, it’s going to have to show a much higher level of profitability to offset that risk.

The MOON team “includes two members with comprehensive knowledge of mining in California including building and revitalizing mines.

Lutz Klingmann brought the Soledad Mountain mine into commercial production, and Lawrence O’Connor restarted the Mesquite mine as VP Operations of Western Goldfield (now New Gold).

MOON’s current Mineral Resource is open at depth and along strike and historical metallurgical testing indicates excellent recovery and a clean zinc concentrate.

Historically, China has always met its own zinc demand.

It’s hard to wrap your head around.

But that’s what is happening.

Think you missed the ride and will be left standing alone without a dream in your heart?

The butterfly effect: man coughs in China – a truck full of zinc rattles down a Californian highway.