Cambridge House VRIC 2018: “Like someone started a rumour they’re giving out free coke and cash”

Two years ago, the mood at the Vancouver Resource Investor Conference, put on annually by Cambridge House, was pretty dour. In fact, I recall discussing with a rare earths CEO at the time how it might have been smart business to set up a booth selling nooses, such was the misery of the mining market at the time.

Last year it picked up a bit. Still, my keynote at that show was pretty lightly attended, especially if you don’t count the homeless guy who was set up in the back row. I’m not kidding.

Usually you can spot ‘poverty row’, where the companies with no money scrounge a few grand to get one of the leftover booths in the corners at the zero hour. The newsletter writers also usually get a spot, with the organizers figuring they’d go to waste otherwise.

Coming down the escalators on Sunday morning, the queue to get your coat checked was a solid ten minute wait, let alone the next queue for registrations. The hall was packed with companies showing their wares, talking up their chances of being the next rock star.

For me, this the VRIC show is always a bellwether to figure out what they year has in store. When Lithium was popping a few years back, you could see it in the crowds piling into lithium panels. When weed was the thing, you knew it because the weed companies pushed in. When Bitcoin first became a thing, not this year but three or four ago, the first shonky coin plays emerged, to crowds of grey haired and confused onlookers.

This year? Mining, mining, nothing but mining. And that’s something that you should begin to think about, because this wasn’t desperation mining, where companies are shoving through a bottleneck to get at whatever lazy 200k in financing might be on offer. No, this was ‘good old days’ mining, where aspirations are large and in the billions, and the talk wasn’t of ‘when will it all turn around’, but ‘which metal will turn it around first?’

The hot talk was in lithium, which has had a bit of a setback in the last month after a big player announced they’d be turning their spigots up, but the spodumene crowd across Canada was feeling most frothy, and the continuing talk of which company has Chinese interests coming for it did not find a natural break point.

I ran a lithium panel with MGX Minerals (MXG.C), Rock Tech Lithium (ROK.V), and Pure Energy (PE.V) that has a big crowd (despite my showing up late – apologies!).

MGX, with 22 projects across multiple industrial metal categories, has oil well-based lithium projects in Canada. Rock Tech has spod sprouting in Ontario. Pure is in the Clayton Valley, where the big run began way back when. All are interesting options, and with the casual nature of which they went about their business, you could see they’re in a comfortable place as market forces swirl.

The Cobalt, Ontario cobalt crowd were around, with Cobalt Power Group (CPO.V) representing, along with First Cobalt (FCC.V – the merger of Cobalt One, First Cobalt, and Cobaltech). and Castle Silver (CSR.V). E3 Metals (ETMC.V), which has petro-lithium projects and a lot of interest, was a tough booth to get near.

The gold miners were having a good time, with Prize Mining (PRZ.V) an ongoing ruck of potential investors, the diamond guys were in demand, the graphite guys were around – the Berkwood Resources (BKR.V) booth was busy enough I couldn’t get in to say hi to CEO Thom Yingling (but beers soon, man), and the Women in Mining booth reportedly had a lot less guys inviting them to parties for less than business-like reasons, which is a nice step.

The big difference, however, and this is a REALLY strong sign, is something we set out to help change two years ago. There were a LOT more young investors, first time investors, and female investors. Gone was the parade of rascal scooters (rest in peace), and in their place were the tough questions of a new breed of investor just now figuring out that mining is a thing, and flush with cash from their weed/blockchain bets.

My keynote address was a mishmash of ‘please sell your overperforming stocks now’ with ‘get your asses into private placement financings so you’re not the mark paying $2 for $0.30 stock’, and a little demonstration of how, if you overlay every marijuana LP’s stock chart over one another, you realize that just about every bet in the sector in 2015 would have made the same return as every other bet, regardless of which company you put it on.

For real. Compare Aurora with Aphria with Emerald, and even Tinley. It’s the same chart. 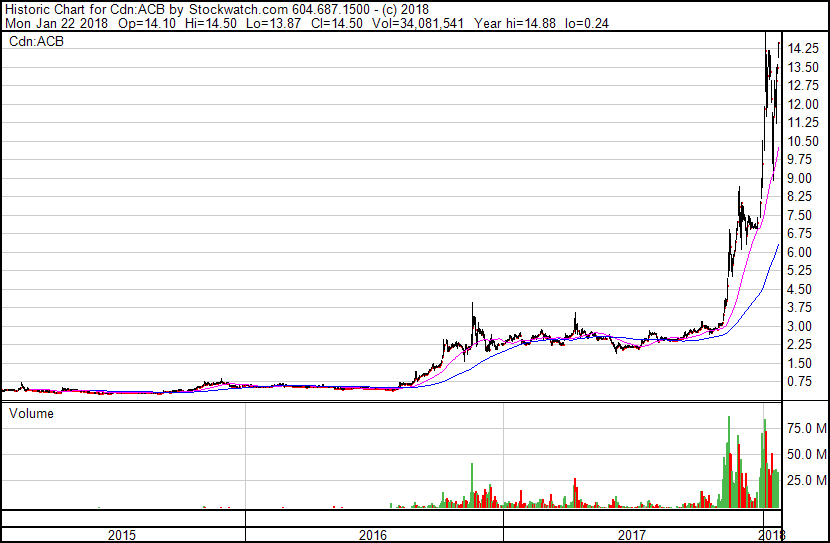 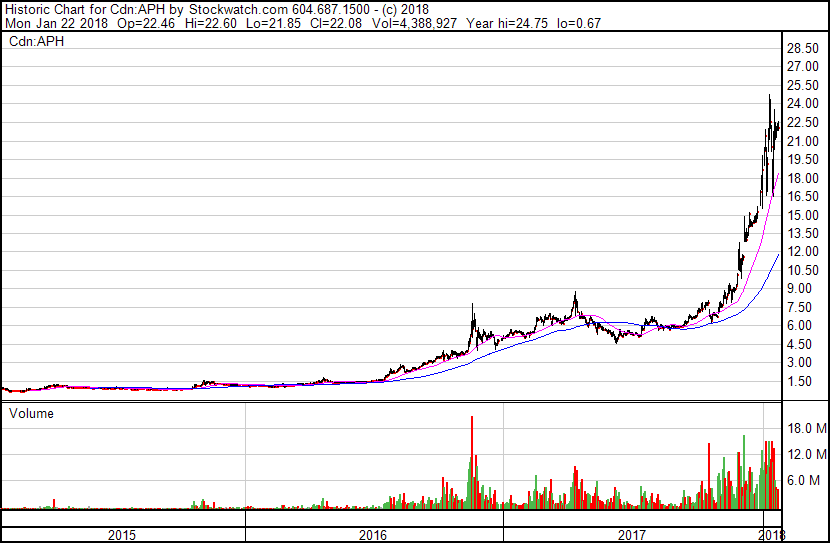 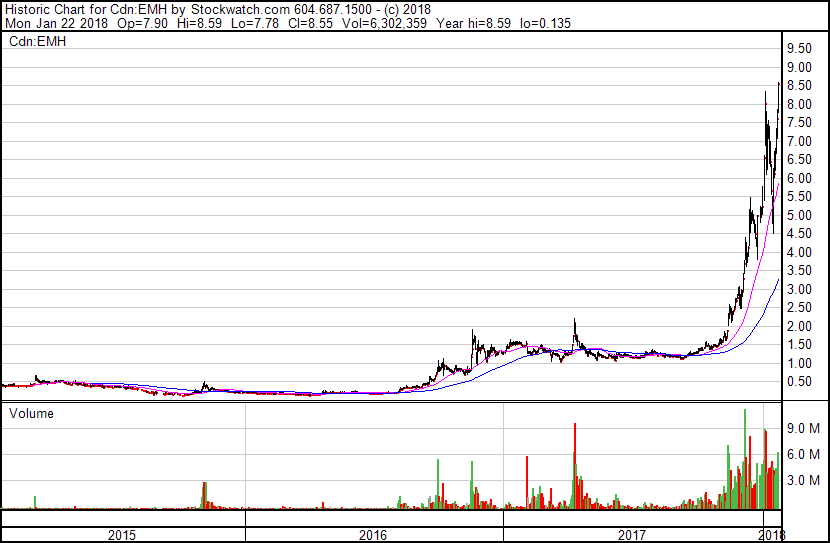 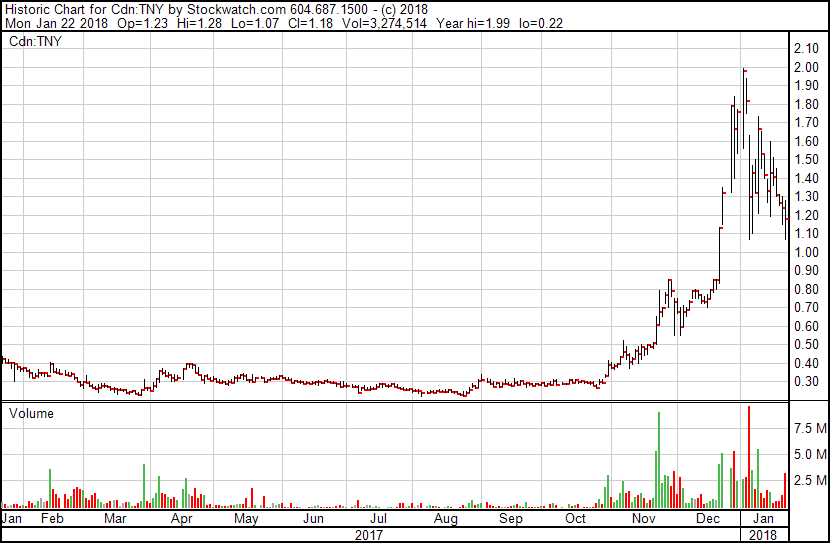 In addition, if you look at the charts of Blockchain companies in September/October to Bitcoin value in November/early December, to weed in late December, a case can be made that a massive lump of NEW investment dollars shifted from the first to the second, and then to the third, like a pack of herding buffalo.

Which begs the question… where will it go next?

I’m making the case for lithium. I think it’s clear Chinese money is motivated and mobile, and has already sucked up Lithium-X (LIX.V) and a chunk of Millennial (ML.V). China needs not just lithium, of which it is short, but high grade lithium, of which it has nearly none, and battery manufacturers and energy companies are cutting cheques and fast to avoid a real problem with supply.

The fall off in some blockchain stocks has been marked in the last few weeks, and that’s a happy situation for me, even though it has affected some companies I have stakes in. Blockchain/crypto deals will reemerge stronger soon, and if they’re cheaper into the bargain, that’s going to be a really interesting scene. What I do know is, no blockchain dealmakers in my circle are panicking, or backing out of the business (at all), and in fact they’re buying as the market softens. ME TOO.

Often a Cambridge House show will end with one clear winner in the ‘this is where I will be putting my money’ stakes, but this year was a wild one. It was like a money mosh pit, with exhibitors becoming more aggressive to show their worth, the old ‘last minute, please don’t invest in this, the boss mad us come’ crowd all but gone, and lots of talk about how mining is going to innovate to take advantage of the ongoing tech boom.

Energy metals? The market is all in.

If your concern is that your weed investment is going to get a little top heavy soon, now’s the time to start figuring out how to tell a good mining stock from bad. We’ll help you with that in the months ahead, the same way we did with weed and the block.

Get cashed up. Opportunity is coming for dinner.

ALSO: The Cambridge House Cantech Letter conference in Toronto is on January 31. You should go.