The first notable thing I heard from a big markets guy when crapped out mining companies started turning into what was then crapped out weed companies back in 2014 was, “What happens now means nothing. It’s what happens when the booze and pharma companies start looking for acquisition targets that matters. Until then, we’re just trying to create the juiciest target.”

As part of the deal, Constellation will provide marketing and brand development support to Canopy. The two companies will work together to produce marijuana-based drinks — a market that some estimates have pegged at $10 billion a year, should the products become legal in the United States.

Constellation has already profited on the deal, at least on paper, picking up their shares at a five-day volume-weighted price of $12.98 per share for an insta-profit of $37.75 million. Not a bad result for three hours of investment, though the $41.6 billion giant probably spends that much on lunch.

This is a big validation for Canopy which, I have no trouble admitting, I’ve rubbished many times over the past three years. The company has spent many millions fixing big problems, has struggled to turn a profit, has not the best record when it comes to product quality, and has spent considerably building a patient base that, if current plans for provincial government distribution go forward, they may not be able to do business with directly for long.

But, they’ve also raised money hand over fist, spread that money in investments across the globe, maintained their first mover advantage and turned it into ‘biggest fish’ advantage, and done exactly as that early wisdom suggested was the most prudent course; they made themselves the biggest target for the really big players in booze and pharma that are waiting for their chance to legally get into weed.

We can talk all day about whether the financials Canopy puts out every quarter justify the massive market cap they have, and we have (for a few years now), but the Constellation deal has now justified the cap – and raised it.

But Canopy’s growth has managed to at least stay on par with those smaller, more volatile players.

Back when I was telling folks Supreme (now $1.39) was a bargain at $0.16, Tweed (now $14.98) was trading around $2, Invictus (now $1.23) was trading at $0.25, and Tinley wasn’t yet a thing. The rising tide has floated (almost) all boats, it’s just that Canopy’s boat was a Navy Destroyer back when everyone else was setting off on a party barge stocked with cocaine and Kokanee.

As Canopy has grown, so too have others by association. If Canopy is worth X, the thinking goes, Aurora, which has more grow space, must be worth something similar. If they add another zero to their market cap, why not Aphria also?

And today’s news will be no different. Canopy is now officially worth that crazy market cap, because a larger fish has written a cheque justifying it. Valuations aren’t just about the likelihood of a dividend, or growth, or the chance a company will not go bankrupt any time soon – they’re also worth what someone will pay to buy what you have, and clearly someone has decided that your long-held Canopy stock is worth at least $13. Now $15.

What matters after today is this: Who’s next?

That’s where your investment thinking needs to be. You can chase on Canopy and probably still make money, and thousands have done exactly that over the past several years. But who else is out there that may benefit from this kind of deal? Who will Big [insert sector here] go after next?

If your thinking is the big fish will go after the biggest minnows they can find, then you’re likely to be looking hard at the bigger Canadian players today; Aurora (ACB.T) is up 5% today and has the quantity side of things well in hand. They’re growing a lot of pot, and constantly building out to grow more. Supreme (FIRE.V) is up marginally on the day, and is for mine a really interesting mid-major option, with a large inexpensive grow, pockets full of unspent cash, and a B2B mindset that makes sense at a time when supply is likely to be tight for some time. Aphria (APH.T) is up 6% as Canopy’s perennial number two.

Betting on big will likely not cause you too many sleepless nights, especially when you start comparing market caps (Canopy’s $2.5 billion to Aurora’s $1.1 billion, to Aphria’s $1.0 billion, to Cronos’ $468m, to Supreme’s $270m, to Invictus’ $98m, to Abcann’s $61m is particularly interesting to me) but if booze is in play (and it’s more than likely that Constellation’s competitors will be looking to at least keep up with their neighbours), it might be worth taking a side bet on the only weed-to-booze play I’m aware of in Tinley Beverages (TNY.C).

Tinley put out news in the last few days that, if we’re honest, buried the update that they’d delayed the launch of their canna-cocktail products because they were still playing with terpenes in a release titled, “Tinley Expands Retail Presence and Provides Operational Update.”

The company had previously elected to delay production of its cannabis beverages to incorporate certain terpene technology that enables users to enjoy an uplifting, Sativa-like effect. This unique approach overcomes a challenge that is often faced by cannabis edibles, which typically deliver a more neutral, Indica-style effect. The revised formulations now enable Tinley’s consumers to enjoy an experience that more closely resembles the social and psychoactive effects of alcoholic beverages. This more directly supports the consumer value proposition of the Tinley ’27 alcohol-inspired product line. The technology has been incorporated into Tinley’s latest formulations, and the company remains confident that it will go into production in the coming weeks, such that its cannabis beverages will be in full circulation well in advance of California’s adult-use legalization on Jan. 1, 2018.

Make no mistake about it – this delay is a good thing. What Tinley has always done is take a deliberate and slow approach, with a view to being ready when Big Booze came a-calling. They didn’t ‘Kushtown USA’ things and just cram as many SKUs as possible into every corner of California’s dispensary rush. They didn’t crank out shitty product for a quick market activity burst and have to deal with returns and disappointed consumers. They didn’t rush to market products that would make a one-off media splash followed by consumer meh. They didn’t fill the room with guys in weed t-shirts who would can grow the chron but struggle to figure out what a logistics network is.

They were on the end of a long barrage of cynicism from people who said they’d never get a product out (they did) or sign a contract with a mainstream grocer chain (they did) or make a product that would taste good (they did) or bring aboard people with real world retail network-building experience (they did) or get their stock above ten cents (they did).

Those who bought in back when we first start talking about the thing (at $0.06 in September 2016), if they’re still holding, are loving their four-bagger, especially today, with the dam having now been opened on big player investment in the alcohol space.

To be sure, nobody is making a big money investment of a game-changing size in Tinley tomorrow. but when they launch their ‘alcohol that gets you stoned instead of hungover’ products in January, when they’ll be 100% legal in California (if still not federally – sigh), then it’s a case of who will come in hardest and first to snap up the first mover.

Others will also be in play – CannaRoyalty (CRZ.C) correctly mailed out investors quickly on the Canopy news, pointing out that a company such as theirs, with 23+ (I’ve lost count) verticals in everything from growing to dispensaries to labs to edibles to vapes to distribution to whatever else you’ve got, will be a very in demand girl at this particular dance.

CEO Marc Lustig wrote, “As a company with our own brands and more IP/licenses on brands than any group I’m aware of, i cant think of news more potentially positive for the cannabis sector as relates to brands and multinational investment than [this] which should be great for the sector and for CRZ.”

Nutritional High (EAT.C) had a nice burst of buying today, up 13% on the Canopy news and the announcement they’re expanding their edibles brand into Washington State.

In actuality, I’d wager most of the buying is on the Canopy news, because their own release says they’ve rented a production facility in Washington for a local licensee with a view to ‘penetrate the Washington medical and adult use market.’ In other words, there’s no penetration yet, and it’s a leaseback deal. Which is fine, but not 13% jump fine.

What’s notable to me is, both Tinley and Nutritional High share some of the same people, Tinley had previously utilized Nutritional High facilities to develop their products, and the two companies experienced a similar level of buying this morning.

The thinking, if I put on my swami hat and attempt to read minds, is if there’s interest in Canopy from a booze company, there’ll be interest at some point in Tinley for the straight up booze play, which means there may be some knock-on interest in their sister company in the edibles space – which may be able to quickly put out their own booze products if that’s where the world wants to get their high.

Down the line from there, CannaRoyalty has it’s own edibles brands and California dispensary distribution network.

Investing in any of these options is not dumb thinking. But it’s thinking that will be much more prescient in January, when the sound of rubber hitting the road in California will be at ear-splitting pitch.

For now, the focus is on the big end of the market, but the barn door has been officially opened. This is phase III of the green rush, where consolidation and branding really matters. And that’s the part where the serious money is made.

Roll up your sleeves, kids. Due diligence is going to be your friend.

California weedco financing deal FinCanna (not yet public but it’s going into Astar Minerals – TAR.V) has changed its deal with Cultivation Technologies to bring revenue forward quicker and get a much bigger piece of the pie. Forget 10% royalties. How’s 50% of profits sound?

September 12, 2017, the interim medical cannabis extraction facility was established on the Coachella premises in accordance with CTI’s Conditional Use Permit. The lab has already begun to produce medical extracts for sale, and is expected to remain in operation during the construction of the medical cannabis campus planned on the six-acre site.

The profit sharing was established in exchange for the extension of certain dates and other amendments to FinCanna’s agreement with CTI.  FinCannahas agreed to reinvest part of its profit sharing in CTI as a secured loan, subject to certain limitations.

If you want in on the pre-listing financing and you’re an accredited investor, here’s your man:

Quadron Cannatech (QCC.V) sent us a picture of their new BOSS cannabis extractor getting readied to ship to Vegas for the upcoming weed conference and it really gives you a sense of the size of the thing. The unit to the right is the cooler unit. 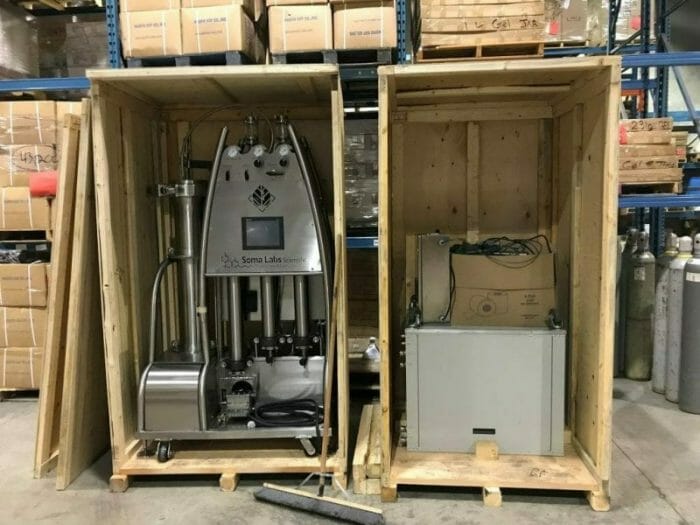