Saint Jean Carbon (SJL.V) hires someone to make a clock battery that will run for 25 minutes

Yep. That’s what it’s come down to at Saint Jean Carbon (SJL.V), which just a few months ago was bragging that it had signed an off-take deal with Panasonic to supply graphite by the boatload, only for it to turn out there was no off-take deal, and the suitcase of graphite they’d sent as a test batch was actually purchased from someone else.

The ASC got involved in that little charade, after we took the company out back of the woodshed and applied a steady and deliberate asskicking to it for lying to investors and selling off stock while doing so, and insiders at the company were duly investigated for insider trading.

But SJL has remained alive, barely, and CEO Paul Ogilvie (who is part of that investigation) has fought back with a press release that you’d call comical, if he didn’t have such a rep for blowing bullshit out to the market.

The company is working on creating high performance graphene batteries through a series of research projects. The first step was to test the graphene against graphite as an anode material in a coin cell (half-cell). The tests show that the graphene outperformed the graphite by about 30% as demonstrated over 100 cycles the discharge capacity for the graphite was 200 to 220 mAh/g and for the graphene 310 to 330 mAh/g. The next step was to create a full pouch cell that would function in a real world application, as an example; a clock with a nightlight.

They’re making history over there at SJL; the clock/nightlight can keep functioning for ‘about 25 minutes’ and takes five minutes to charge.

If that looks a little science fair-y to you, that’s because it is. Here are some other clock batteries we found that have a longer battery life. 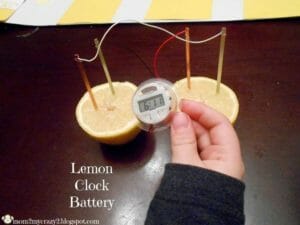 The lemon clock! A favourite of parents who forgot about science fair until the night before everywhere, and powerful enough to light up an LED for minutes! 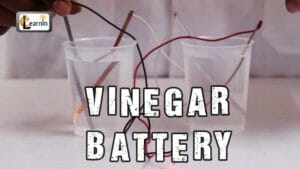 The vinegar battery, which we’ll all be making use of when the zombie apocalypse comes to get 18 seconds out of our cellphones. 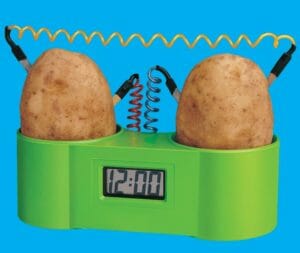 The potato clock! You can even buy this as a ready-made kit, which works well for SJL’s tendency to hire other companies to do the work it’s claiming credit for.

The preparation of the cells and test were all managed by Graffana Inc of Waterloo Ontario. The raw material was source from a third party.

Of course it was, Paul.

But wait, SJL wants to get to a point where their new sciencey battery could power an electric car!

The Company is very encouraged by the results and as such will complete the final series of tests. The Company will now design and construct a high performance graphene full cell.

We got you, Paul.

One thing before we wrap up this coverage of SJL’s science graphene battery experiment with Paul Ogilvie The Pseudo-Science Guy:

It’s been done. Tools down.

FULL DISCLOSURE: I wouldn’t touch this stock if it were given to me wrapped in bacon and cash, delivered by Kate Beckinsale in full Resident Evil costume while my balls were being tickled by a thousand bunny ears. That this company remains publicly listed is a national embarrassment.