Expose yourself to Manganese: You know you want to…

If you awoke this morning thinking about compelling and potentially profitable manganese investments, you’re not alone. Read on gentle reader: There’s money to be made. 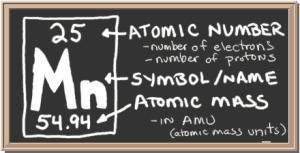 In this unique case, manganese represents the fourth ‘M’ following the established 3 ‘M’ investment tenets, which are: Money, Moxie and Management.

Companies that have all three are always worth a look.

Fun Fact: By dissolving some manganese into a battery’s electrolyte, the process solves the critical issue of low storage capacity.

Nerd Alert, courtesy of the folks at the Pacific Northwest National Laboratory (funded by the US DOE Office of Science):

PNNL added manganese ions to the electrolyte in a new test battery and put the revised battery through another round of tests. This time around, the test battery could reach a storage capacity of 285 milliAmpere-hours per gram of manganese oxide over 5,000 cycles, while retaining 92 percent of its initial storage capacity.

“As a result, zinc-manganese oxide batteries could be a more viable solution for large-scale energy storage than the lithium-ion and lead-acid batteries used to support the grid today.”

Here’s Where It Gets Good

Articles tend to leave the big reveal until mid-piece, but since manganese is the fourth most produced metal, investors should be interested to note that until recently there are no mines or properties in North America, and virtually all global manganese comes from South Africa.

Of the top ten manganese producing countries list, North America is nowhere to be found. So that’s it for investing in NA manganese…

Woodstock New Brunswick is likely not the first-place investors would search for virtually the only deposit in North America. Manganese X Energy Corp. (MangX or the Company) (MN.V) (9SC2.F) (OTC PINK: SNCGF) is a Canadian company seeking to create a secure North American source of manganese ore, initially at its Battery Hill Property.

Bryan Way, in his Master’s Thesis on the Woodstock area manganese occurrences, reports that the area “hosts a series of banded iron formations that collectively constitute one of the largest manganese resources in North America, approximately 194,000,000 tonnes”. While not yet proven, the total global reserves approach 600 million. Even if a percentage of that theory –say 50 million– was proven, it would instantly place Canada in the top five reserve list. And MangX as a major player.

MangX is planning a PEA and NI 4301-1 in relatively short order (within FY2017), which will delineate reserves,

And so, it begins; from the Company’s February 14th Press release:

The global market for Manganese is projected to reach 28.2 million metric tons by 2022, driven by rising investments in infrastructure development projects, growing automobile production, and rapid urbanization in emerging markets.

“It is important to be clear we are talking about electrolytic manganese, not ferro-manganese or silico-manganese, which are produced in the US from manganese ores imported from Gabon, but mostly supplied as ferro-alloys imported from South Africa, China and elsewhere. Electrolytic manganese is used as an alloying element in aluminum and copper alloys, as a colorant in bricks, and combined with lithium or nickel in batteries.

Indeed, its use in lithium-ion manganese batteries is its fastest and potentially most challenging application — if the US cannot access competitively priced and reliable supplies of manganese, a host of high-tech new applications will be lost to foreign competitors.”

Now that MangX has been established as a potentially significant – and currently peerless and competitor-free in North America – global force in the production of manganese, it’s worth checking the market and forecasts.

Before that, let’s talk about why Manganese is important, and the growth/supply/demand issues around it.

The USGS states the US is now 100% import dependent on 19 minerals, including manganese, which is classed as a critical mineral in the US.

Not only is the secure production and supply of Manganese economically important, but it’s also critical from a security perspective. With Trump calling for preferential US steel industry treatment, manganese once again gains ground.

Obviously, a North American supply would be welcome and much sought after.

Enter MangX. The two things go beyond the properties, and the commitment is the aggressive nature of management and the depth of the advisory board.

Recently announced to the former was Dr. Luisa Moreno, a Co-founder and Managing Partner of Toronto-based Tahuti Global, a successful Global Advisory and Consulting firm supplying services to government institutions, investment firms and companies in the mineral resource sector. Dr. Moreno has been involved in industry metals, with a major focus on technology and energy metal companies, for many years and has published reports on rare earths and other critical metals.

“We are very pleased to have Dr. Moreno agree to join the board. Dr. Moreno’s technical and economic research abilities, along with her unparalleled expertise in strategic minerals and related processes within the critical metals industry, will make her a valuable addition to the Manganese X Energy team,” said Martin Kepman, CEO of Manganese X Energy Corp.

“Our technical team will focus on metallurgical processing to produce a high-grade concentrate [and] economical, cost saving, environmentally friendly processes which we anticipate being very price competitive.”

MangX has sufficient funds to advance their goals through drilling, a PEA, and a detailed NI 43-101. Recently completed final tranche of an increased to $1.425 million Private Placement. The Company is confident monies on hand are sufficient for the foreseeable future, which is important in a sector that many are still learning about.

On the R&D side, one need look no further than Vancouver-based Nano One Materials Corp. (NNO.V) (LBMB.F) as deeply committed to the use of manganese. In fact, they’re developing tech that could remove cobalt from certain battery formulations, but manganese is another story.

“…applies to the fabrication of the full range of lithium ion cathode materials, including spinels, lithium iron phosphates (LFP) and all formulations of nickel manganese cobaltate (NMC),” added Dr. Campbell, Chief Scientist for Nano One. “We expect to boost capacity of the pilot plant that is under construction, which we will then be able to demonstrate to strategic interests looking for technology, cost and performance advantages.”

Industrially, both companies could well eventually complement each other. Interestingly, MangX is about 25% of Nano One’s Market cap of $44 million. As well, both stocks are trading near their 52 week highs at C$0.22 and C$0.78 respectively.

Both companies are focused on ensuring that financings are as non-dilutive as possible to add shareholder value, which is a big plus in the current market, where some folks are grabbing at cash by any means possible.

And no article about batteries, no matter the component would be complete without a Tesla tease.

Needless to say, as that research progresses, manganese becomes increasingly critical and sought after.

The Bottom line is that manganese exposure is likely worthwhile. The only way investors can currently get exploration exposure in North America is through MangX. The Company has only 40 million shares out, is very aggressive and trades around a quarter.

I suspect lots of direct and indirect news coming. This story appears to have decent legs over the next 6-12 months. Not a lot left to say beyond that.