If you’ve been paying attention to the Equity.Guru site over the last few weeks, the following map is no stranger to you. 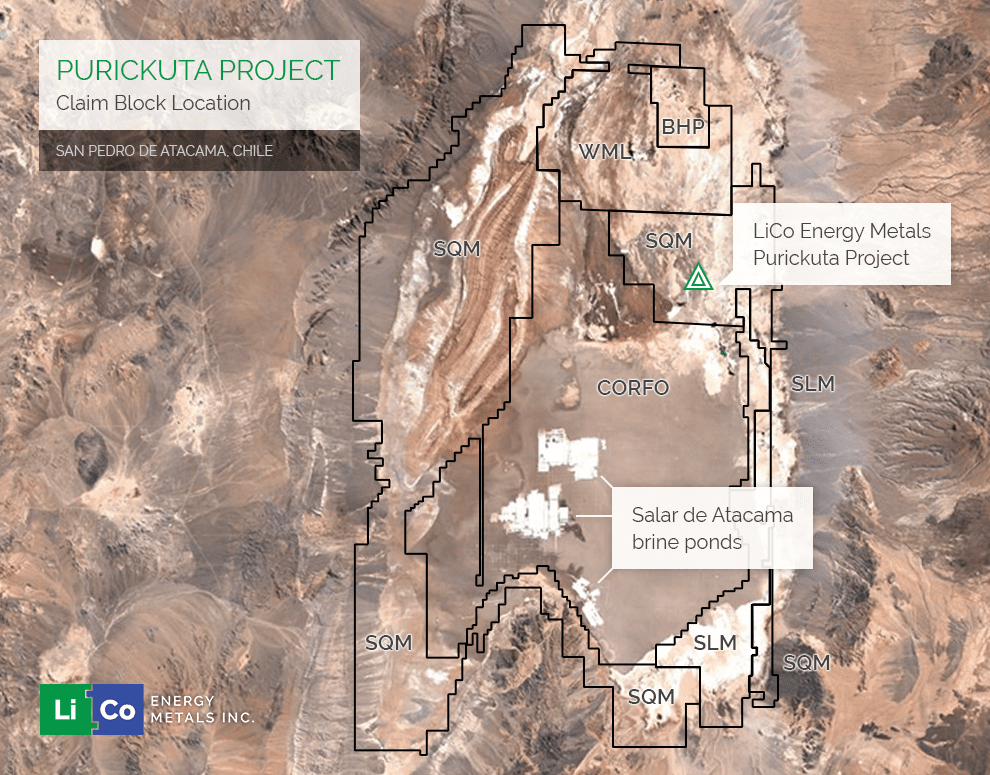 The green triangle? That’s the plot that LiCo Energy Metals managed to sign an LOI for, surrounded by one of the biggest lithium producers in the world, snared right out from under their noses.

Since we started covering LiCo, and other companies in the energy metals sector, we have witnessed a number of lithium plays moving higher, faster, while the cobalt sector is also revving its engine, and graphite and manganese throw elbows behind them.

So what is LiCo? Is it lithium or cobalt? Actually, it’s both, and in a big way.

And the market is noticing.

At issue for many buying into the stock is LiCo’s move to take a not-cheap stake in a lithium property in the Atacama Salar in Chile, which sits entirely within the property boundary of one of the world’s largest lithium producers.

And that, in a region that produces 37% of the world’s lithium needs.

If you’re trying to figure out how a Canadian junior nabs a property with that much potential out from under the nose of one of the biggest players around, perhaps it’s a case of ‘it’s not what you know but whom you know.’

Management at LiCo appear to have some decent contacts. The Purickuta property lies within one of the main asset of SQM – Sociedad Química y Minera de Chile S.A. (NYSE: SQM). The deal was not cheap, but moving in to one of the best neighbourhoods never is.

“LiCo can earn up to a 60-per-cent interest in the Purickuta lithium exploitation concession located within Chile’s Salar de Atacama, the world’s largest and purest active source of lithium,” said the news release announcing the deal. “The LOI, when superseded by a definitive option agreement, will require LiCo to make cash payments totaling $8.4-million (U.S.), issuing five million shares, and making work and development commitments during the term of the option agreement.”

On first glance, that’s no cheap deal, but upon closer inspection, it is potentially a steal. The game plan I see unfolding is something like this; Make nice with your neighbors and show them you mean business and are a responsible corporate citizen, and that you are not a threat but a value-add to the region. Do the work, advance the property, and your rising tide lifts all boats.

Reuter’s has reported since August of last year that Ningbo Shanshan Co Ltd. (a Chinese manufacturer of lithium battery materials), is in advanced talks to buy a stake in SQM, one of the world’s biggest lithium producers, according to two sources with direct knowledge of the matter.

The deal-talks highlight growing interest in the renewable battery ingredient, the price of which is rocketing as an electric vehicle boom and a renewed push towards solar, wind turbine, and battery power takes root. They are also the latest sign of a Chinese acquisition binge in Latin America that, in some cases, has been fueled by hunger for the region’s raw materials as Chinese projects peter out.

Whether or not the Chinese buying binge comes to fruition, you know the appetite for lithium is high. If a deal isn’t reached with this company, there will no doubt be other suitors banging on the door.

The beauty of the mining game is that little LiCo could bring that buyer right on through. If LiCo is successful in testing, and demonstrating it can produce high quality lithium concentrate, maybe they can find an international conglomerate to sign an off-take agreement to fund a purchase of the end product. This could prove to be a good pilot test for the bigger picture.

The LiCo management team and advisory board has been strengthened by a few key additions of late, notably, the appointment of Dwayne Melrose as director and chair of the company’s technical advisory board. In addition to being a seasoned director of a public mining company, Melrose has over 30 years’ experience in the industry, where he has been very successful in advancing three significant exploration projects towards production.

Under his leadership as President/CEO of True Gold Mining Inc., that company progressed from an exploration outfit into a fully-permitted and financed mine construction outfit in just over three years. Melrose was instrumental in re-focusing the project from a high capex project into a low capex/high margin heap leach project, in addition to the company completing over $200 million in equity and debt financing.

Melrose spent over twenty years with Cameco Corporation/Centerra Gold Inc. working in a variety of different geographic locations and business environments, such as Canada, USA, Kyrgyzstan and Kazakhstan. In Canada, Melrose was directly responsible for the exploration team and its programs at the Kumtor Gold Mine where he significantly increased the reserves and resources at the mine. Melrose joined Minco Mining Group in 2007, where the company successfully progressed from exploration into development stage and greatly increased in shareholder value. Melrose was directly responsible for defining the Fuwan silver deposit of 157 million ounces, which is a big win by itself.

Additionally, LiCo appointed a Chilean chemical engineer with more than 15 years of experience in mining and chemical processes in virtually all the important salars in the South American lithium triangle.

The Purickuta asset alone could be a game changer for LiCo, and they’re doing all the necessary things to make it so. And if that were all they were doing, you’d say the $14 million market cap outfit was doing enough.

But they also happen to have a property in good old Canada, which has an underground access tunnel and was built by a past producing miner. If you guess where, you can guess what they’re digging for: It’s in the town of Cobalt, Ontario.

As you can see below, cobalt prices have been on quite a run. 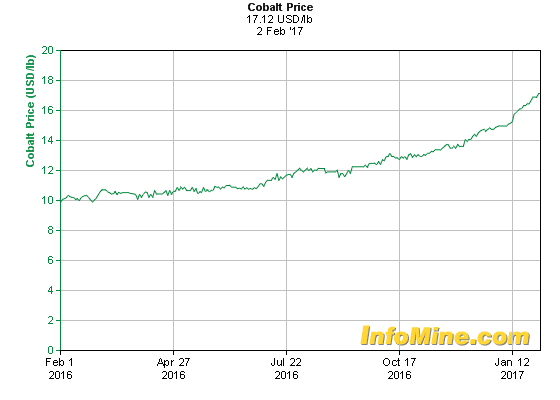 We recently discussed (in great detail) the importance of cobalt in the lithium-ion battery supply chain, and the scarcity of it in local production. That’s what’s making the price run.

Most Canadian cobalt is produced as a credit in nickel and copper production, so when copper is having a rough time, as it has for a while, cobalt supplies dwindle.

The primary metals in the Cobalt, Ontario region? Cobalt and Silver. Traditionally, the cobalt has gotten in the way of silver mining, leading it to often be cast aside in slurry heaps. Not anymore.

As we’ve discussed ad infinitum, Cobalt mostly comes from the DNC in Africa under very inhumane circumstances. We’re talking child slavery, toxic dust, pennies on the dollar from unscrupulous ore agents. It’s a horror show. Every electronics company right now is one Sixty Minutes report away from having to ditch their cobalt supply, and there exists no local options.. yet.

The 43-101 resource report on the property may demonstrate its true potential. This isn’t some staked claim dubbed a cobalt property to gather investor attention. 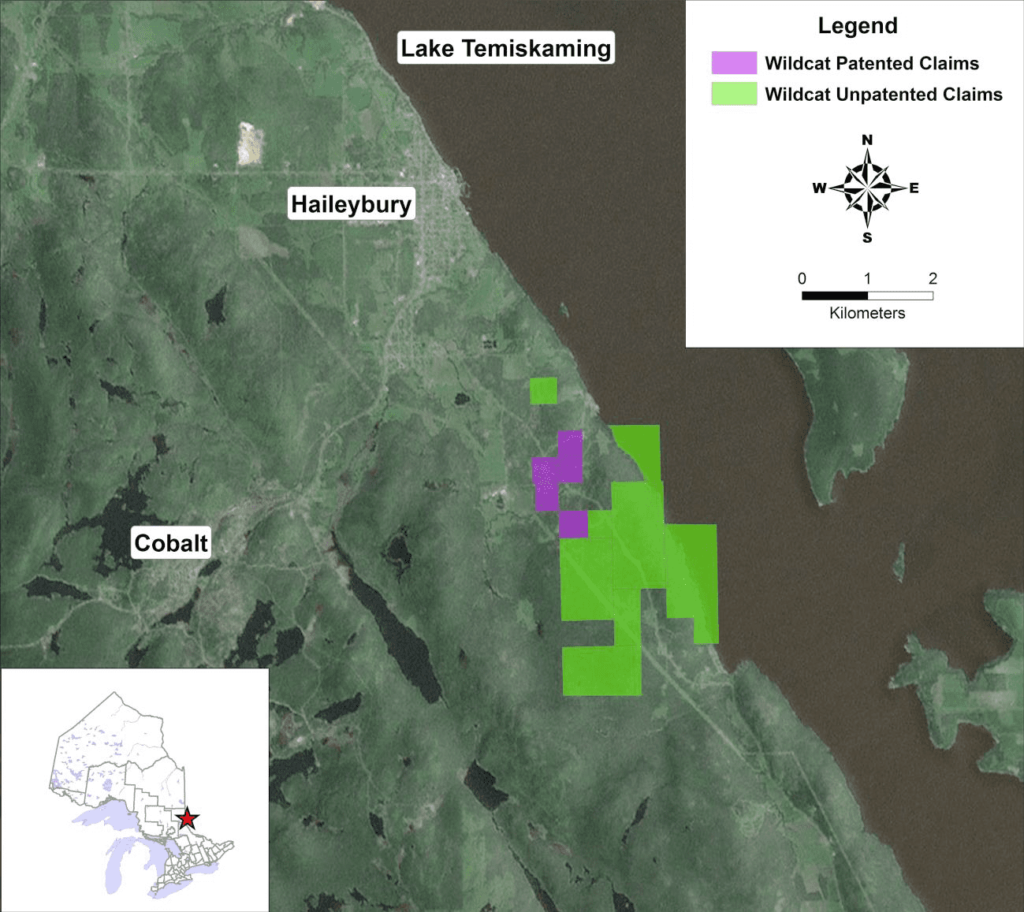 It adjoins the south and west boundaries of claims that hosted the Agaunico Mine which, from 1905 through to 1961,produced a total of 4,350,000 lbs. of cobalt, and 980,000 oz. of silver. A significant portion of the cobalt that was produced at the Agaunico Mine was located along structures that extended southward towards the northern boundary of claim 372, currently under option to LiCo.

Still with us? Okay, let’s go deeper and fully wonk out.

Christ on a bike, the pointyheads know how to bore a man.

Bottom line: Over $25 million (inflation-adjusted) has been spent on past work on the Teledyne Property. This work has resulted in valuable infrastructure, which includes a development ramp and a modern adit going down 500 feet parallel to the vein.

Back in 1903, the Teledyne property was one of the world’s largest silver camps. Historically, an estimated 18 million kg of silver and 14 million kg of cobalt has been produced here. Even today, it’s a mining-friendly community with a skilled workforce.

Teledyne Canada’s diamond drilling programs, conducted from 1979 through to 1980 on the property, intersected significant cobalt mineralization. This is further supported by the presence of nearby historical production at the Agaunico Mine that produced a total of 4,350,000 lbs. of Co, and 980,000 oz. of Ag from the period between 1905 and 1961.

A significant portion of the cobalt that was produced at the Agaunico Mine was located along structures that extended southward towards the northern boundary of claim 372, currently under option to LiCo.

Here are some pictures of the Teledyne shaft and a map of past drilling and other past producers in the region. 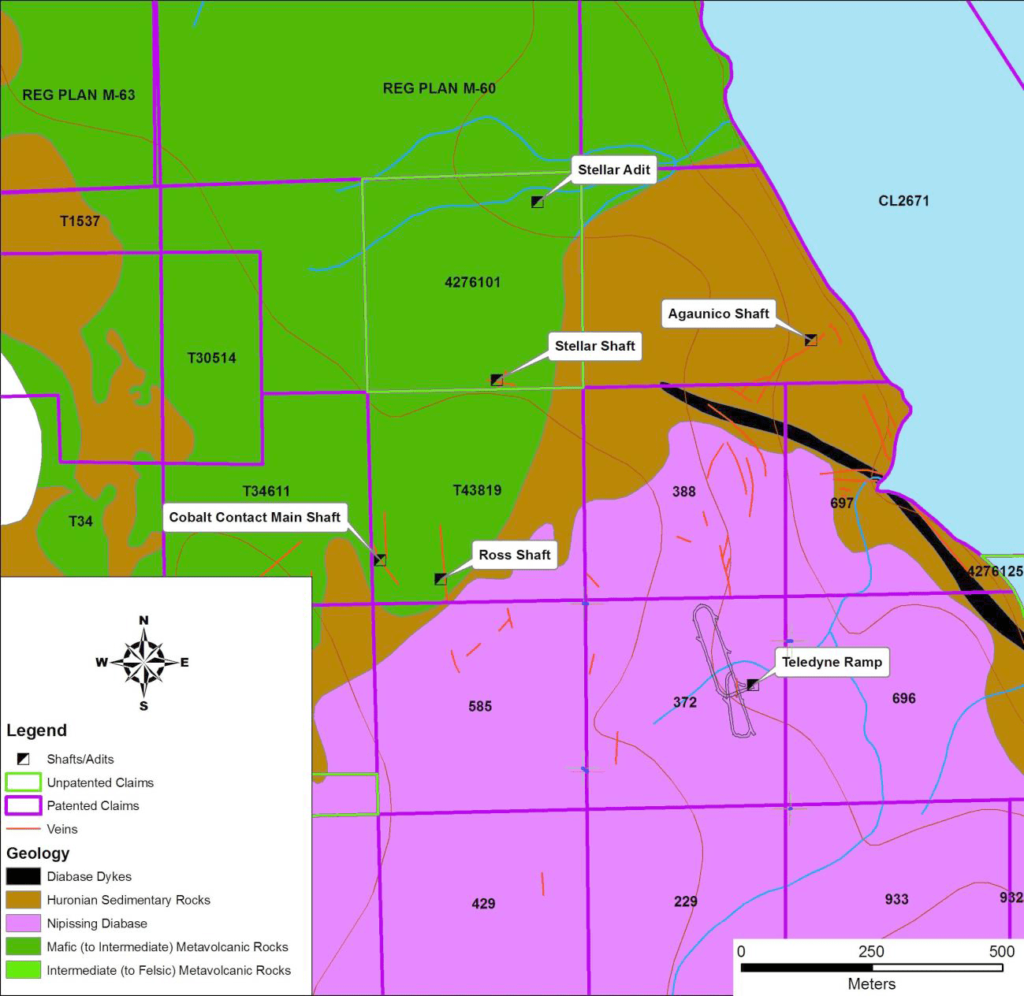 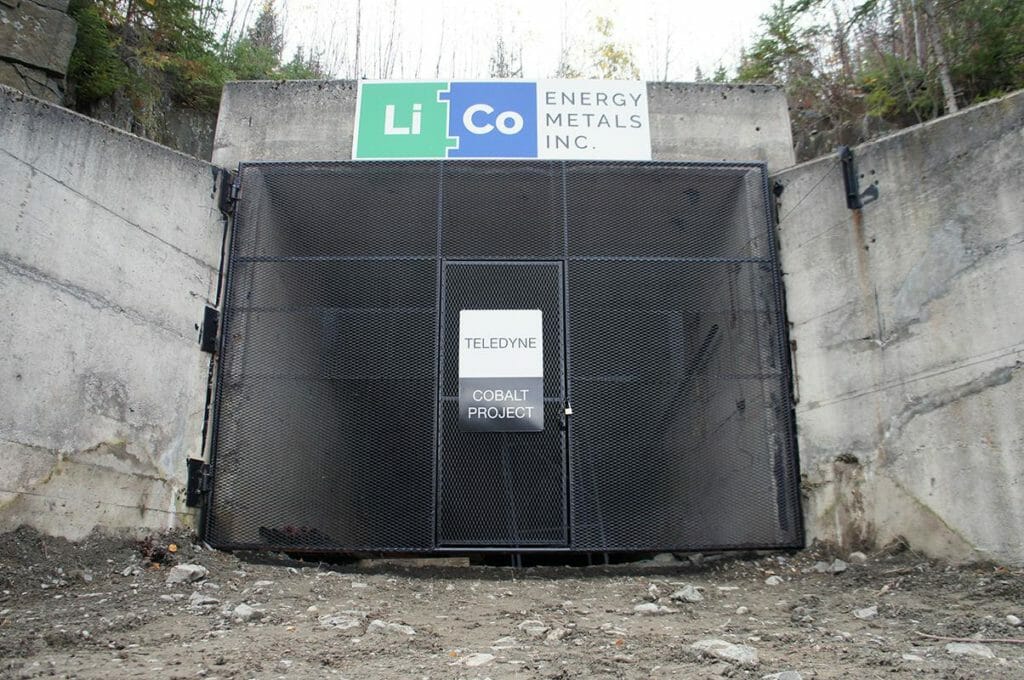 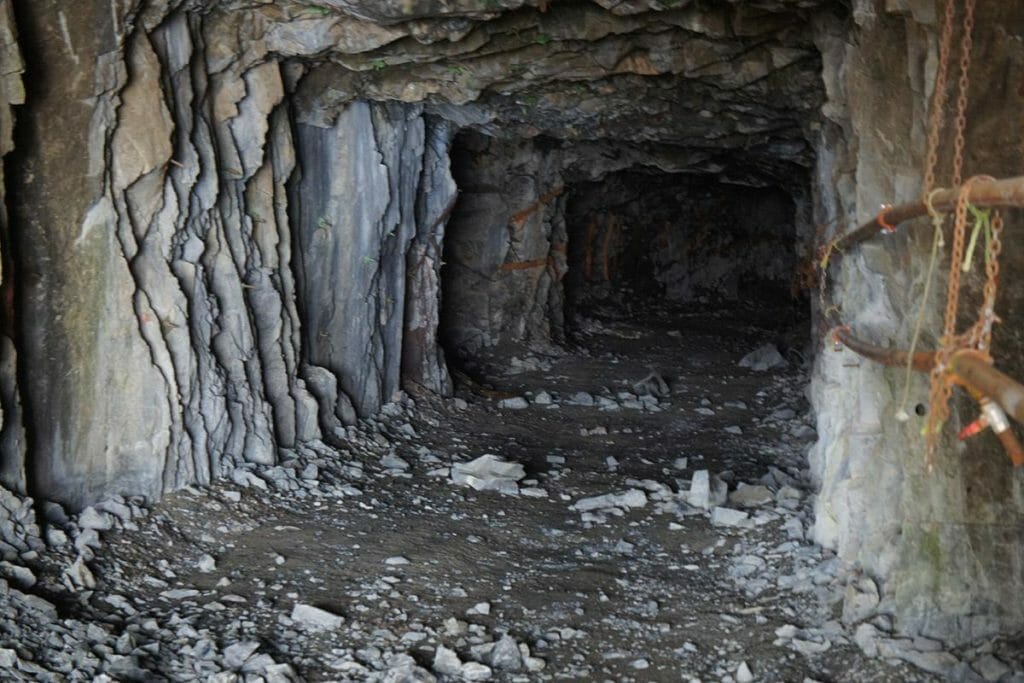 Conclusion: With approximately 93 million shares outstanding, held by a loyal group of investors, and approximately $1.5 million cash in the bank, the upside potential on this is, in my opinion, is potentially massive.

It only tales one drill hole, a certain board appointment of a strategic individual, or the sniff of an off-take deal to send a stock like this into feral territory. There’s never a certainty that such a game changer will come, but in terms of lowering the risk and raising the ceiling, LiCo is off to the kind of start that says they’re looking to beat the sector, not coat-tail it.