ExGen Resources –[stock_quote symbol=”EXG.V”]– announced last week its second ‘prospect generator’ JV deal, when it signed an LOI with Phoenix Global Mining for that company to take an 80% interest in the Empire Mine Project.

But for ExGen, the deal was something else entirely. This was further vindication of their recent business model rework, and the next few yards in the road to establishing their legitimacy in the space.

Riverside Resources –[stock_quote symbol=”RRI.V”]– boss John-Mark Staude told me six months ago, “It’s easy to say you’re a generator. And it’s easy to go claim mineral rights on some land. The hard part is the deal, the actual getting of a partner to agree to take on the risk. Not everyone can do that.”

ExGen just did that, building on their option deal on the DOK project with Continental Precious Minerals –[stock_quote symbol=”CZQ.T”]– from last year.

ExGen was formerly Boxxer Gold, and Boxxer Gold was loaded with copper plays at exactly the wrong time, and with not a lot of cash to pivot or push through with one. Execs weren’t paying themselves, preferring to stay tight and efficient while they figured out the next strategy.

That strategy has been to take advantage of their strength, which was a deep portfolio of potential projects, by seeking JVs and/or acquisitions. Really, it was the best possible move, perhaps the only move.

And the Phoenix Global news shows the ExGen crew weren’t just talking the talk. They’re not at third base yet, but they’re halfway to first, and in good time.

Trading volume isn’t there yet, and it might not be for a few news releases more. Riverside, as a comparable, has a ton of strong news out of their outfit, and not only is their share price still headed south, but their market cap really isn’t much more than ExGen’s is.

ExGen isn’t panicking. Cash burn is still minimal – execs are paying themselves now, but still a pittance compared to the competition. And though copper has been in such a rut of late, ExGen has a ‘why copper’ page on their website, to argue the point that the commodity is undervalued.

It is. Few would argue that point.

But the bigger question is when will it be back?

This chart shows you the copper commodity price from the last 12 months. It has an interesting uptick going on… 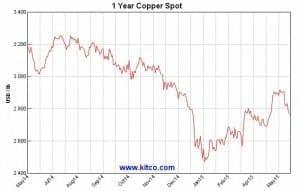 Getting a deal in copper plays, right now, is like cheating in the Special Olympics. It’s too easy. Share prices are destroyed. Volume is nothing. You can vacuum up deals for a bag of stale bread and a lift to the train station, and as that copper price gets back near US$3 per lb, it won’t take much activity to take a company on a run.

So let’s take a look at the ExGen/Phoenix deal:

Empire is a former copper-gold-silver producer in the middle of sunny Idaho. It’s previously cranked out 694k tonnes grading 3.6% copper, 1.6 g/t of gold and 53.9 g/t silver, back in forty years of work that ended in 1942.

ExGen keeps a 20% carried interest until the mine starts construction, and they get a 2.5% net smelter return. They also get 10m shares in Phoenix, which is tough to put a dollar figure on because that company is private.

Importantly, Phoenix has to stick $1m in to the mine to earn their 80%, and finance all ongoing maintenance and sustaining costs.

Phoenix is very capable of making all that happen. In fact, odds are they’ll walk it in. The Phoenix team took Nelson Gold to an 80k oz p/year gold producer, and also took Oxus Gold to production in Uzbekistan. Chairman Roger Turner has been in the game for the best part of four decades.

Phoenix, for the record, aren’t chumps in this deal. They’re getting a good arrangement, no question. If there’s anything to be picked through at Empire, they won’t feel the cost of this deal a bit.

For ExGen, they lighten their ongoing costs a little, and seeing one of their projects move ahead. When that million is sunk into the ground, if good data comes forward, that 20% ExGen continues to hold will be worth far more than the 100% they had last week. Low risk, high reward move.

And ExGen has four other plays to move forward.

If they rolled the shares back to a market-pleasing 31.9m shares in a 10:1, you’d be looking at a $0.20 share price, which nobody would be sniffing at in this market. That such a rollback hasn’t happened yet is a gift to you, the investor who would like to make 25% profit on every half cent nudge.

I’m not going to suggest ExGen is running to a buck in the next few months. It might not run to $0.10 in that time. But if it has one good news day in the next several weeks, and it’s working hard to make that happen, $0.02 is a lovely launchpad.

The Phoenix deal is a good one, and it brings with it the confirmation that ExGen is doing what it needs to in order to be seen as a legitimate prospect generator moving forward.