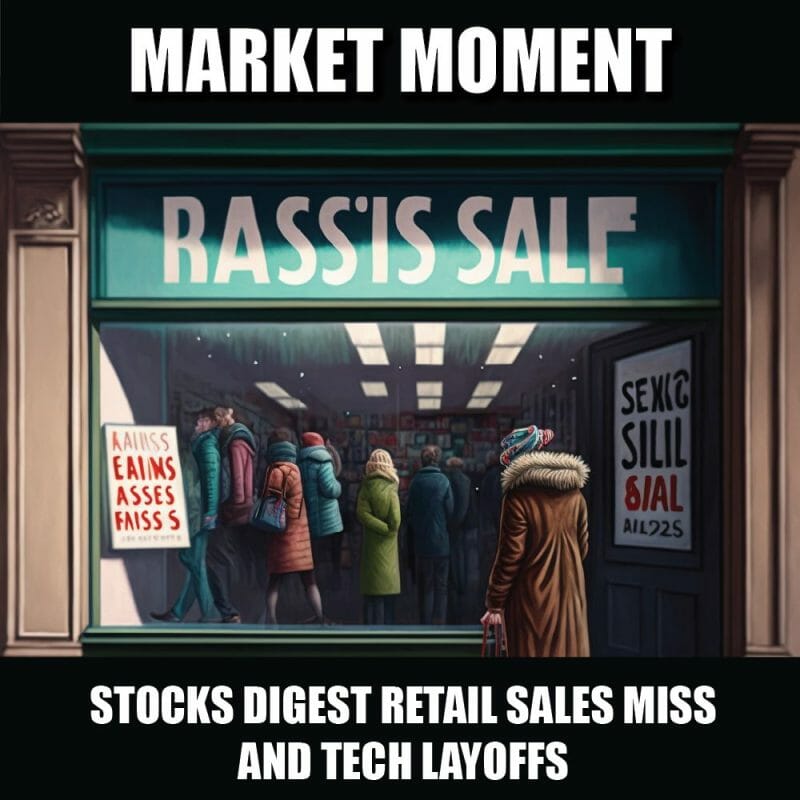 Goldman Sachs having the worst earnings miss in a decade provided hints of a weak economy given that the bank took a major hit in provisions for credit losses. Stock markets are now heading lower post December 2022 retail sales data which shows more signs of a slowing economy, a weak consumer, and more trouble for retailers in 2023. Or simply put, the r word. Recession.

The holiday sales fell short of expectations as consumers are being hit by inflation and rising interest rates and trying to save money.

Sales during November and December grew 5.3% year over year to $936.3 billion, below the major trade group’s prediction for growth of between 6% and 8% over the year prior. The sales forecast excludes spending at automobile dealers, gasoline stations and restaurants. Inflation is also included in the gains which drives up total sales.

The value of overall retail purchases broadly decreased 1.1% in December after a downwardly revised 1% drop in the prior month. Ten of 13 retail categories fell last month, including motor vehicles, furniture and personal care stores. Even online sales were down 1.1%.

This steep decline suggests that consumption growth is set to slow significantly in Q1 2023. And it isn’t surprising given that Americans and most of the world are paying more for groceries, shelter, and racking up credit card balances while spending their savings.

Recession is getting thrown around a lot in recent months, and with the Fed raising interest rates, a slowdown of the economy and a recession is likely coming. Although, the Fed believes it can do a “safe landing” and avoid a major recession. The Fed keeps pointing at strong labor/employment data as evidence of a robust economy, and one that is not slowing down.

But perhaps recent layoffs will impact that data. We know about the major cuts from Wall Street banks and many tech companies such as Alphabet, Meta, Twitter and Salesforce. But we can now add two more major tech companies to the list.

Microsoft is set to lay off 10,000 employees through March 31st as it braces for slower revenue growth. Back in October 2022, the software maker called for the slowest quarterly growth since 2016.

Amazon will also begin a fresh round of job cuts in what is expected to be the largest workforce cuts in Amazon’s 28 year history. At the beginning of this year, CEO Andy Jassy said layoffs would impact more than 18,000 employees, primarily in its human resources and stores divisions. In November 2022, Amazon said it was looking to cut staff, including in its devices and recruiting organizations.

The company is also confronting slowing sales growth, rising expenses and a worsening economic outlook. In addition to the layoffs, Amazon has implemented a hiring freeze across its corporate workforce, slowed its warehouse expansion, and shuttered some experimental projects, including its telehealth service and a quirky, video-calling projector for kids.

With the economy showing more signs of a slowdown with corporate layoffs and lower retail sales, the markets are expecting the Fed to pivot soon. 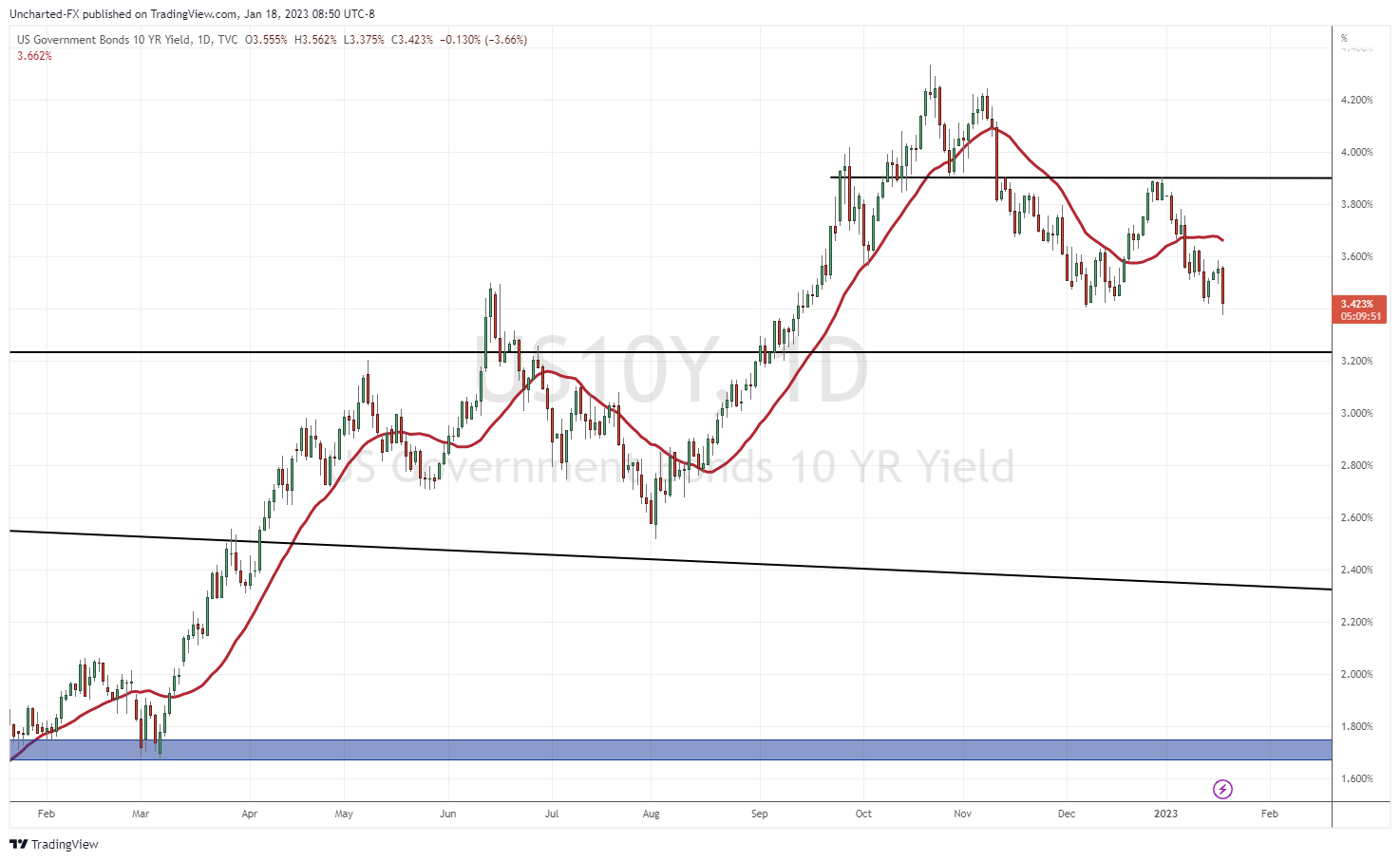 Bond yields are falling today after the data indicating that the markets really are pricing in a dovish Fed, or one that will raise rates very slowly. 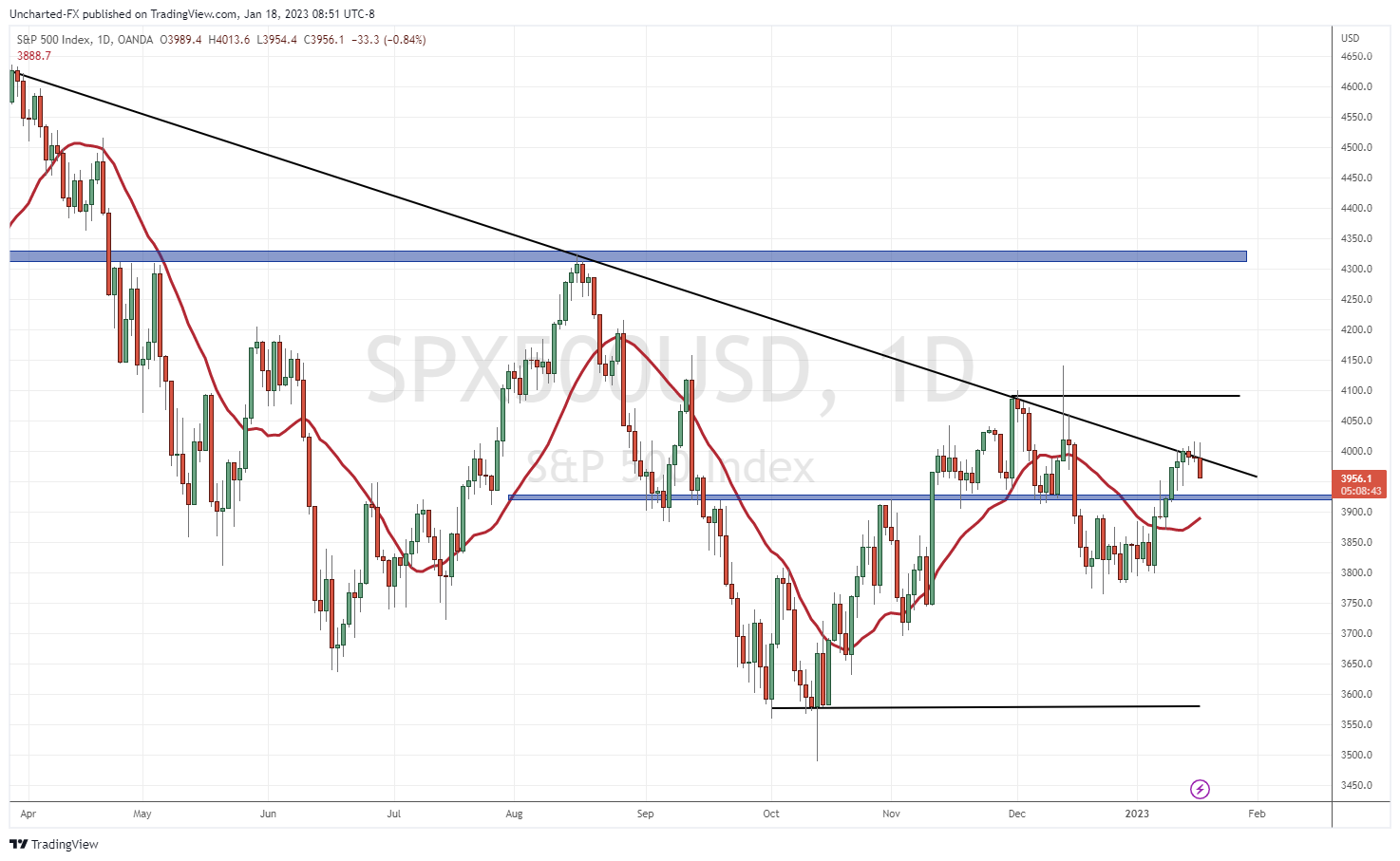 All US stock markets are down. However, they still remain above our breakout zones so this could just be a pullback. We would start to get worried if markets break back below support zones on our charts.