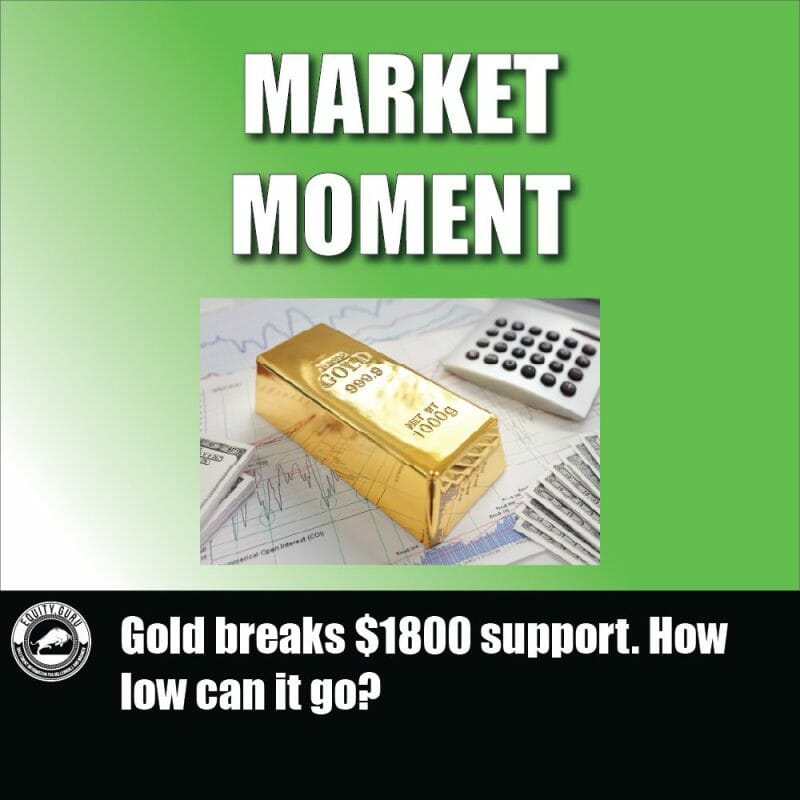 Recession is now at the top of the list for traders and. The R word has eclipsed inflation, but I think that will come back once we get the next CPI data.

Recently, I wrote about recession signs. Firstly, by looking at copper prices. Copper (Dr. Copper) has entered a bear market before each of the past four recessions. Looking to make it a fifth time now!

In last week’s agricultural sector roundup, I wrote about how the majority of ag commodities are in a bear market. Most commodities are now. If I was to put a positive spin on this, a recession means demand will be killed which means non-monetary inflation numbers will begin to drop, showing us signs of inflation peaking. But it will depend on how severe this recession gets. This is going to be a big point because if it isn’t severe enough, inflation will still persist.

Finally, yesterday I discussed that the bond markets are pricing in a recession. However, there could be another culprit as I laid out in that Market Moment article.

With all this fear and uncertainty, we are seeing a big move into the US dollar. 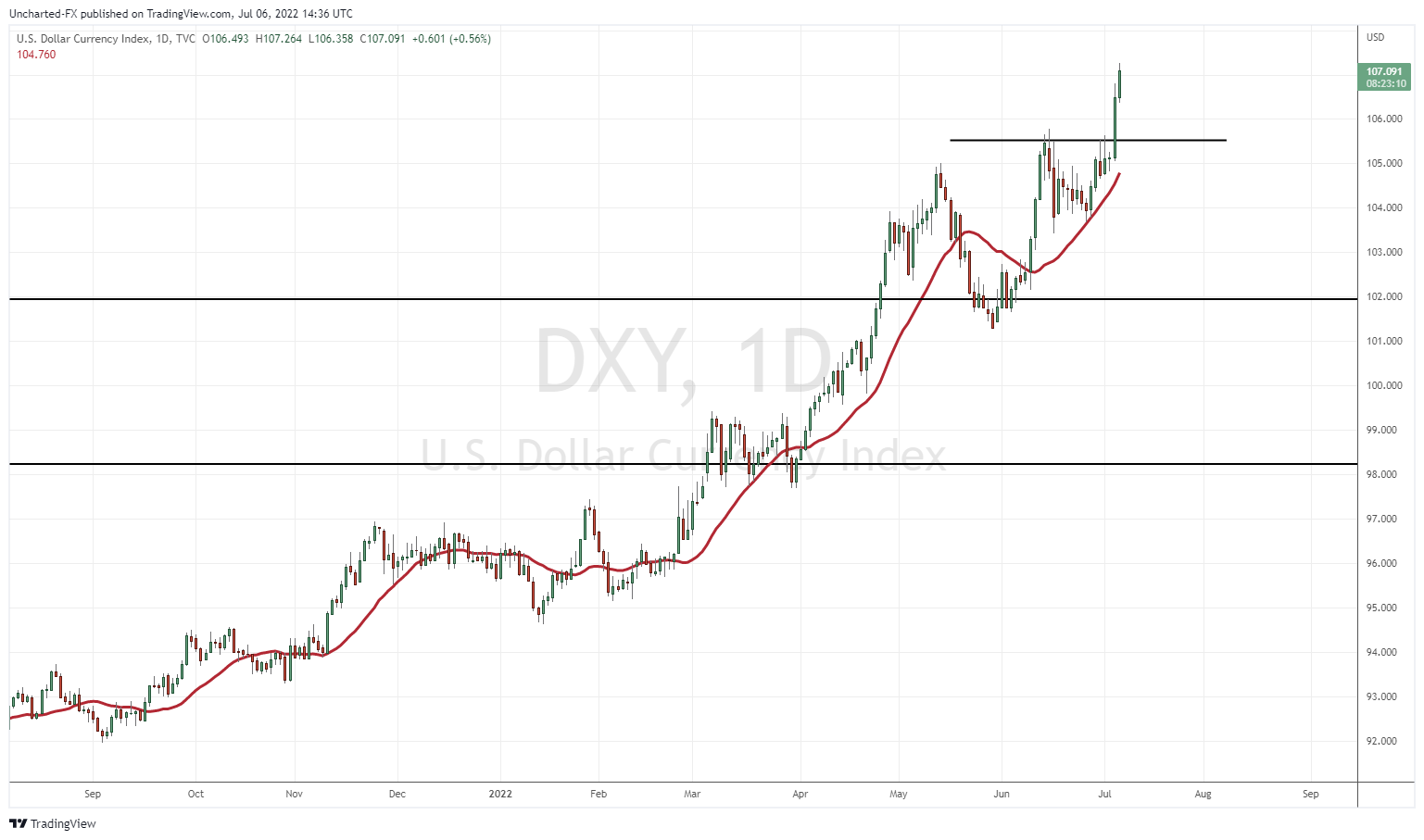 The dollar is breaking out and wreaking havoc on other fiat. The issues in Asia are pretty much known. The Japanese Yen has recently seen lows not seen since 2000, but other Asian currencies like the Indian Rupee, Thai Baht, and the Korean Won to just name a few, are feeling the pinch.

For those who have come across the work of Brent Johnson, it could be dollar milkshake time. Money around the world will head into the reserve currency which is the US dollar for safety. This will lead to unprecedented demand in the dollar causing it to rally… and potentially triggering a crisis in emerging markets with large dollar denominated debt.

Dollar strength is also hitting commodities which tend to be priced in dollars. A quick aside here: but if the dollar gets too strong, maybe Russia selling commodities for any other currency except the dollar becomes more attractive.

When it comes to dollar strength, we gold bugs get worried. With the dollar and gold having an inverse correlation, a stronger dollar generally means gold will get hit. And boy did gold get crushed! We have confirmed a close below $1800 support, a support which has held since January of 2022. This now means we should expect further downside in gold unless we can reclaim $1800.

There seems to be a lot of minor support levels in the 1700’s, but the level I am targeting comes in just below $1700. And here’s why: 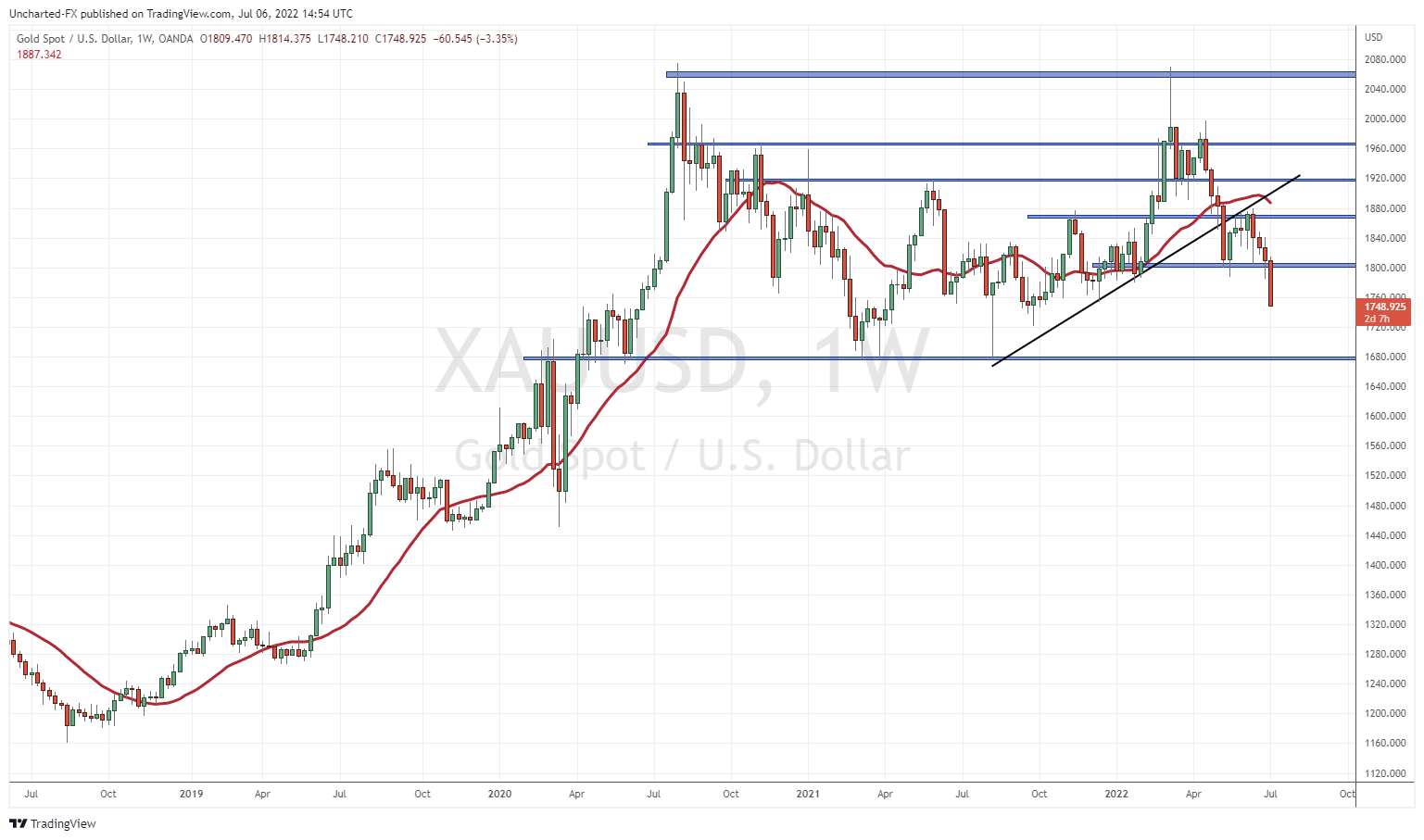 I find you can see things more clearly going out to the longer timeframe. On the weekly chart, market structure is indicating a move down to $1680. On the weekly, we are in the process of making the FIRST lower high with a close below $1800. The hope for bulls would be a weekly close by the end of Friday above $1760. This $1760 area actually has multiple touches and can be considered a pretty important support zone.

Gold isn’t the only thing getting hit. 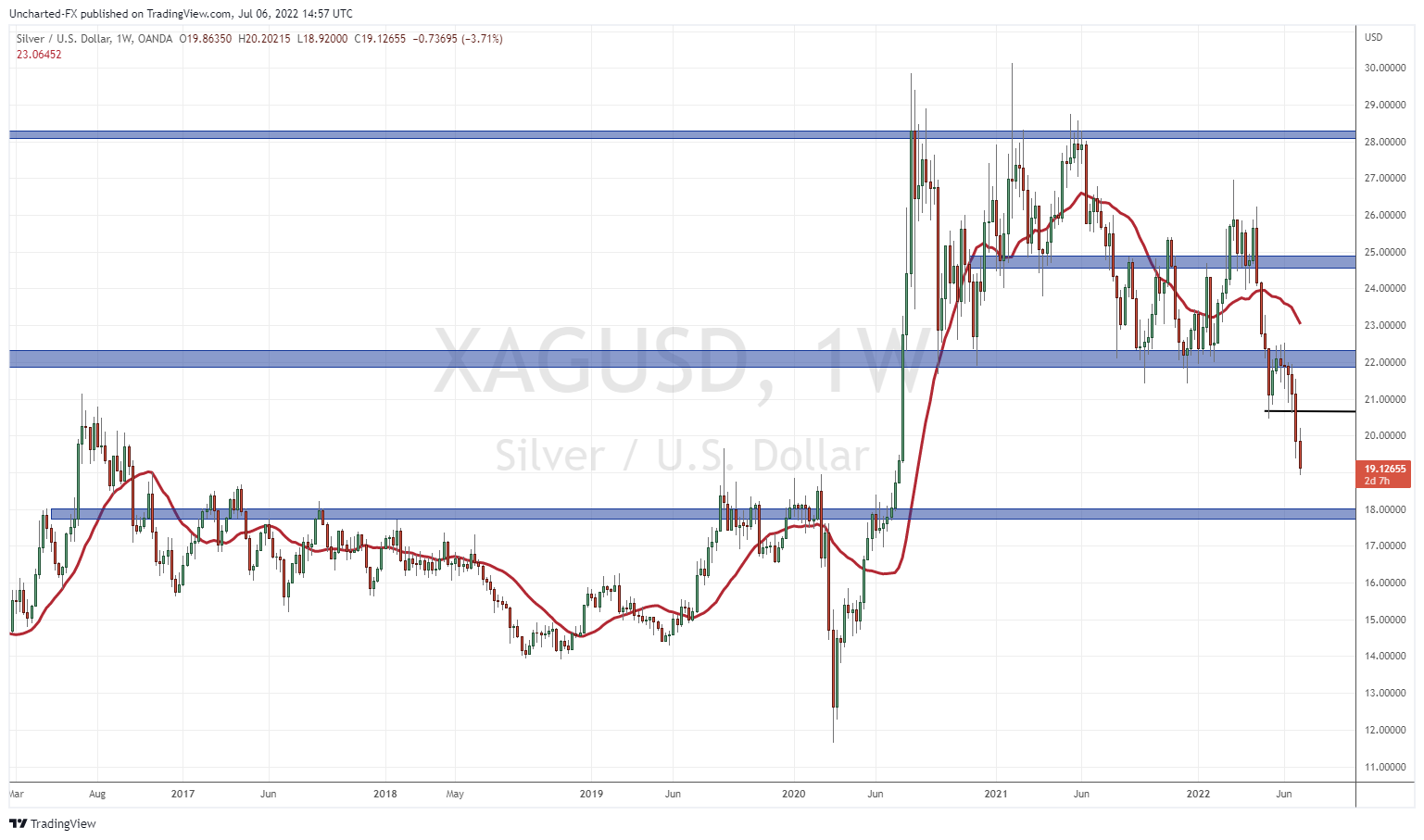 Silver on the weekly chart broke below support way back in early May 2022. Since then, I have been waiting for either silver to reclaim $22, or reject on the retest. You can see the latter happened. Silver is likely heading to $18., and perhaps even lower.

Our favorite white metal is feeling the sting because it is considered an industrial metal. Not a type of metal that does well in a recession. Just look at the chart of copper. 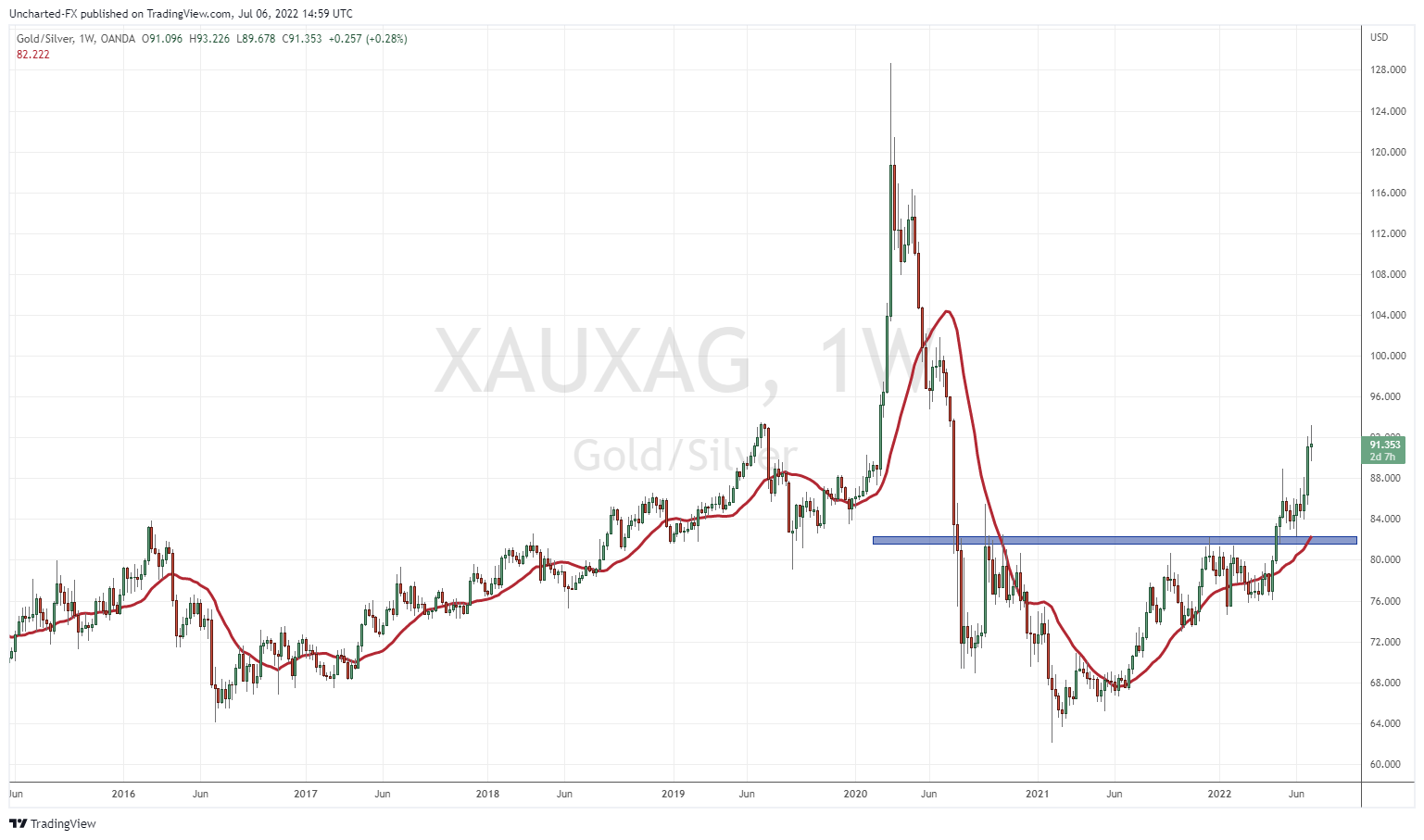 The other reason silver will feel the pain is because of this chart. The Gold/Silver index. As silver was retesting its resistance zone, the gold/silver index was also retesting its breakout after triggering an inverse head and shoulders pattern.

Am I shook? Nope. In fact on the contrary, I believe these next few months will be the last time one will be able to purchase metals at these cheap prices. If you are a follower of my work, I have said there will be a period at first when the dollar strength brings down the metals. But then, once people realize the real issues with the central banks and the economy, money will run into both metals and the US dollar as so happens whenever there is a confidence crisis. Just looking around and forecasting what comes next, I think it is not a stretch to say a confidence crisis in governments, central banks and fiat money is coming.