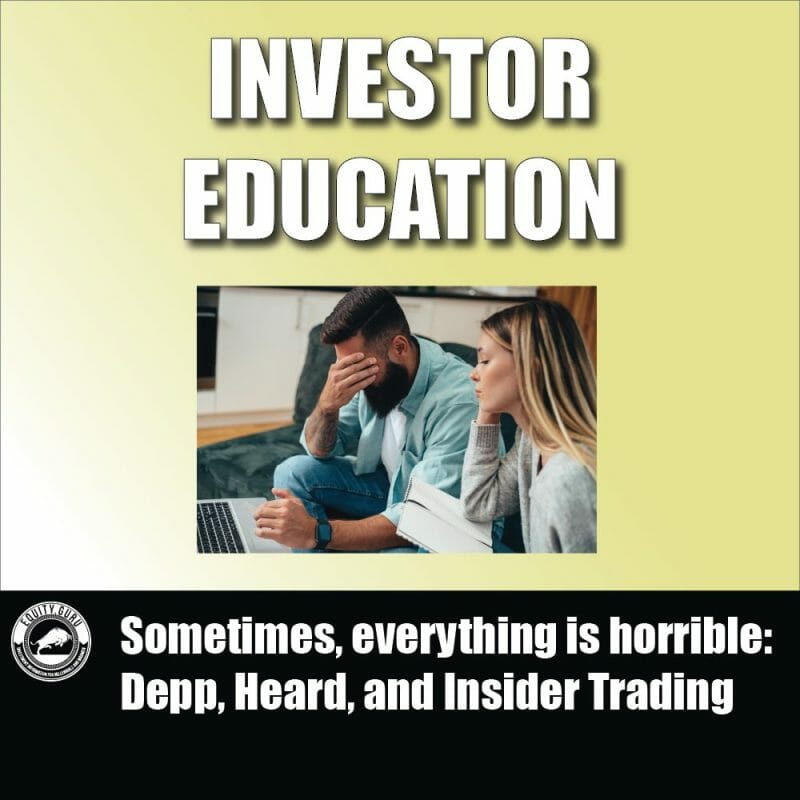 Sometimes, everything is horrible: Depp, Heard, and Insider Trading

If you haven’t seen or heard about the Johnny Depp-Amber Heard trial, congratulations – you’ve found and entered a new dimension. (Start sharing your location – my number is 778-834-I’m kidding I’m not doing that).

For those of us still out here battling the 100-odd memes flung at our screens daily, we have all had the misfortune of watching this disaster unfold.

It’s safe to say that not since the O.J. Simpson case, when more than half of America tuned in to watch the verdict, has a trial become such a circus. And not since Lorena Bobbitt, when hot dogs and other phallic-shaped snacks were sold outside the courthouse, has a case involving accusations of domestic violence been treated like such a spectator sport.

Even after all our declarations of being better now, of having learned from the treatment of women like Monica Lewinsky or Britney Spears, we are no closer to being the kind of culture that does not televise such events and capitalize on other people’s trauma (I guess there’s something to be said for it being the lowest-brow way to escape our own).

It seems we are no wiser about the complicated and sometimes messy realities of intimate partner abuse. If anything, this case has perpetuated every last trope. And all the while, I’d imagine, victims of domestic violence had to stand by and watch this trial play out with horror.

(In my humble and irrelevant opinion, Heard was a problematic female figure for a case of such wide attention and this trial will make it more difficult for all domestic violence survivors to come forward from here on out). Despite Depp walking with more money than Heard, there are no real winners here.

As per, this has nothing to do with my article and falls entirely out of sync with my job description. I just figured I’d throw my two cents into the void.

But (to try to tie this in), in the vein of trials and corruption and all things horrible, last Wednesday, June 1st, marked the world’s first ever digital asset insider trading scheme!

I’m sure you are familiar with this little rule but whether you’re dealing with a public company’s stock or a JPEG of a pixelated skater boy, you can’t make a trade based on secret information that you know will affect a security’s future price. Nathaniel Chastain found that out yesterday.

aforementioned JPEG of a pixelated skater boy (NFT worth $23.7 million)

The former head of product at leading NFT marketplace OpenSea was charged with wire fraud and money laundering linked to the insider trading of NFTs (non-fungible tokens).

According to the DOJ, this is the first insider trading case involving digital assets.

I actually understood none of the above paragraph. For more context:

This whole thing started last September, when OpenSea users noticed something sketchy going on with crypto wallets belonging to Chastain. They were purchasing NFTs right before the assets were featured on the site’s homepage, then selling them once their prices had gone up. Prosecutors said they were sold for typically 2x–5x the original amount.

Turns out, Chastain allegedly chose the NFTs he had purchased to be splashed on the front page of OpenSea, and then cashed them in for a profit of $67,000, according to 8BTCNews. This would be a very clever scheme aside from the fact he got caught.

Once it was alerted of these transactions, OpenSea basically admitted that insider trading was taking place, and in September asked Chastain to leave the company after an investigation.

As of March, Chastain was working on a new NFT project, Oval.
His charges carry a maximum 20-year prison term.

Why do I care?
(You shouldn’t, really. Unless you want to buy NFTs but, like, the more you know and all).

After a surge in popularity, interest in NFT art has begun to cool in recent months, and hackers and scammers have gravitated to the NFT trade.

Some NFTs have artificially risen in value because their owners have repeatedly sold themselves their own works – a scam known as wash trading. Others have successfully sold NFTs of other artists’ works without permission. Actor Seth Green recently claimed that a hacker’s theft of one of his NFTs was keeping him from finishing a new show.

Crypto experts predict that more legal action is on its way given widespread complaints around scams, market manipulation, phishing, and other financial crimes in the unregulated NFT space.

What is an NFT again? I need to be reminded, like, every other day.
Reminder before you skip over this section because I know you will: financial literacy is sexy.

NFT stands for non-fungible token. In human words, a unique, one-of-a-kind asset.
In other words, no two NFTs are alike. NFTs are digital assets rooted in the same basic technology as cryptocurrencies, and provide a way to prove digital ownership. Popularity of NFT artwork exploded during the pandemic, creating an estimated $40 billion market last year.

Most NFTs are part of the Ethereum blockchain, but it is worth noting that other blockchains can implement their own versions of NFTs. Basically, blockchain technology is what allows for the ‘one-of-a-kind-ness’ that defines and places value on the NFT.

In investor-speak, NFTs are like any other speculative asset: you buy it and hope that one day the value goes up, and you can sell for a profit.