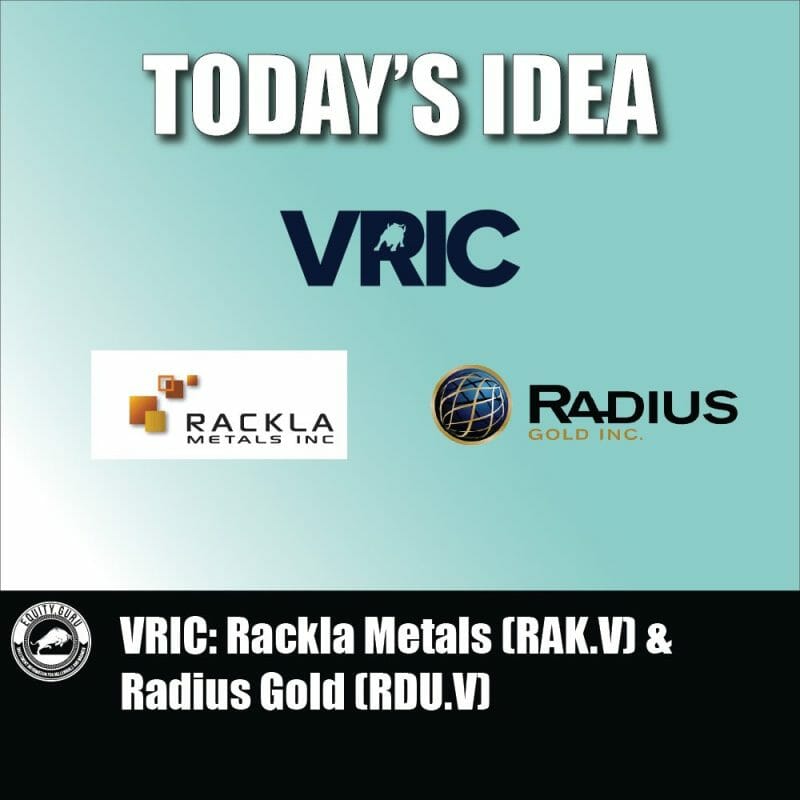 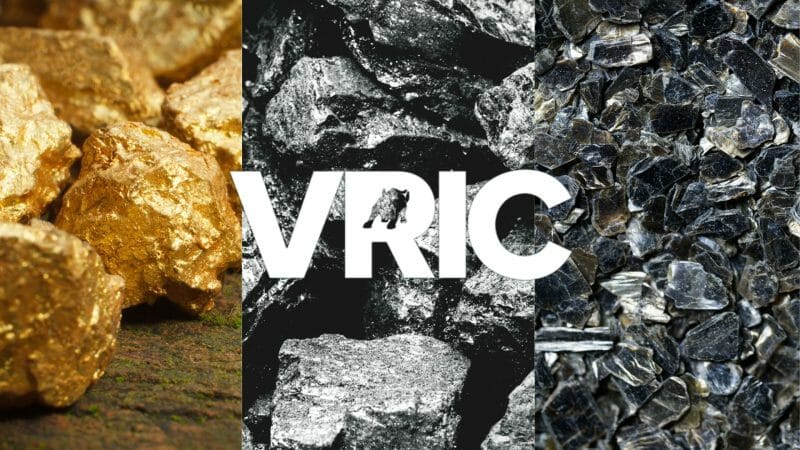 It’s that time of year again. The Vancouver Resource Investment Conference (VRIC) is right around the corner, and it’s time for yours truly to limber up. While I do not reside in Vancouver, or anywhere remotely close to it, I will be doing my part to participate by introducing you to two companies that will be making an appearance at the VRIC. Before we get into that, let’s talk about why the VRIC is important.

If you were to attend this year’s VRIC, you would find more than 100 macro-finance keynote speakers, over 5000 investors, and 225 commodity investment opportunities. In other words, if you have even an inkling of interest in resources like gold, the VRIC is where you want to be. On May 17 and May 18, 2022, the VRIC will host the “ultimate financial masterclass” featuring speakers like Stephen J. Harper.

Even if you have no interest in mining, it may be time to reconsider. Personally, I hate mining. However, I would be lying if I said it wasn’t profitable. According to The Business Research Company, the global mining market is expected to grow from $1.84 trillion in 2021 to $2.06 trillion in 2022. This market is projected to expand at a compound annual growth rate (CAGR) of 12%.

Let’s not forgot that the mining market has experienced a substantial boost following the onset of the Russia-Ukraine war, with resources like palladium reaching an all-time high of $3,440 in March 2022. As an advocate for plant-based, sustainability, and environmentalism, admitting that we need mining is a tough pill to swallow. We need mined materials for just about every aspect of our lives, including housing, electronics, and automobiles, to name just a few.

Furthermore, mining is essential for the economy. For example, let’s take a look at Ontario, Canada. In 2019, direct mining employment in the province totaled more than 19,000 workers. Overall, the mining industry contributed $373 million in taxes to all three levels of government, essentially paying for hospitals, schools, and other public facilities. It can be argued that mining is the beating heart of many economies. With this in mind, let’s take a look at two companies digging for gold, literally. 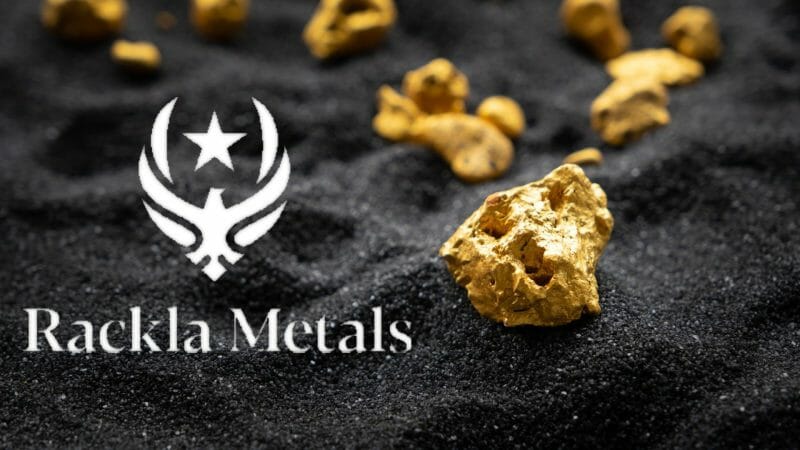 Rackla Metals Inc. (RAK.V) is a mineral exploration company. Who would have guessed? The Company is part of the Gold Group of companies led by Simon Ridgway, a successful prospector and mining financier. With this in mind, The Gold Group is a group of public companies focused on discovering, developing, and producing precious base metals. The maintenance of environmental protection, social responsibility, and innovation is of the utmost importance to The Gold Group.

Referring back to Rackla, the Company has primarily focused on gold exploration in the Yukon Territory. However, on May 5, 2021, Rackla announced that it had entered into an agreement with Golden Mining Ltd. to acquire a 73.5% interest in the Misisi Gold Project located in the Democratic Republic of Congo (DRC).

According to the terms of the definitive agreement, the acquisition was to be made through the issuance of up to 11 million common shares of Rackla at a deemed price of CAD$0.40 per share. The project, owned by Leda Mining Congo SA, is comprised of three contiguous 30-year mining leases that are valid until 2045. The project covers 133 square kilometers of highly prospective exploration ground along the 55-kilometer-long Kibara Gold Belt.

As much as I would love to talk about the Kibara Gold Belt, I would rather not waste your time. After all, Rackla recently announced on March 31, 2022, that it will not complete the acquisition of Golden Mining and the related Misisi Gold Project. Why? Both Rackla and Gold Mining were unable to raise the funds necessary to cover the Misisi Project’s underlying debts while also advancing the property in a significant way. Here’s a breakdown of the non-refundable payments Rackla made:

However, it’s not all bad news. These payments were made on behalf of Golden Mining and, as such, the Company keeps open the right to reclaim its expenditures should Golden Mining or its shareholders acquire an interest in the Misisi Project. With that long aside out of the way, let’s talk about Rackla’s other properties, including its 100% owned Rivier Property. 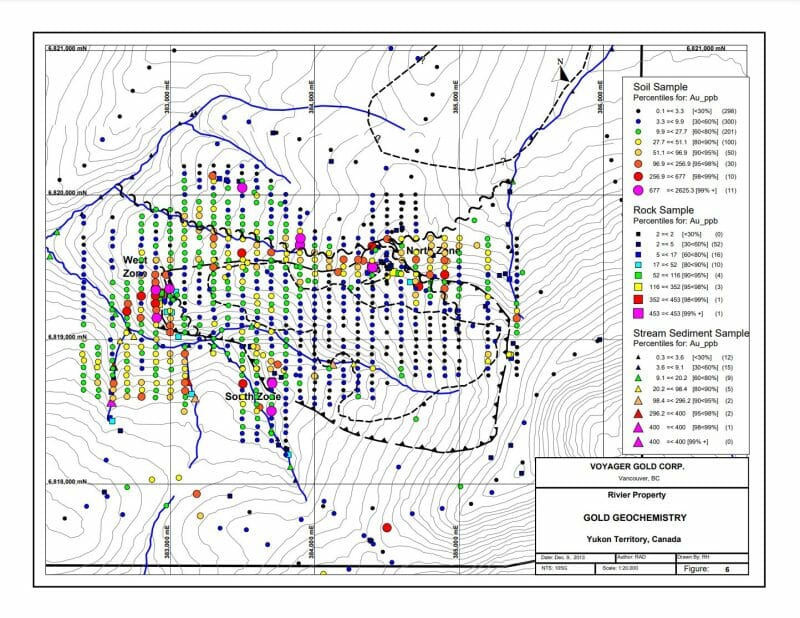 The Rivier Property consists of 116 quartz claims covering 2,404 hectares, located in Watson Lake Mining District 80 kilometers southeast of Ross River, Yukon. That being said, it should be noted that Rackla’s claims associated with the Rivier Property are valid until 2022. Anyways. The property was originally staked in 2010 to cover the source area for anomalous gold and arsenic values that were detected in regional stream sediment samples.

Cutting to the chase, Rackla discovered gold mineralization in carbonate-altered ultramafics of listwanite lithology. Don’t think too hard about it, just know that listwanite is a rock type. With this in mind, three main mineralized zones in the listwanite revealed soils >2 g/t Au in each of the three zones. Using an airborne magnetic survey, Rackla has outlined high-priority drill targets.

According to Rackla’s completed 2020 Summer Field Program at its Rivier Project, several soil samples revealed over 2 grams per tonne of gold. As such, the exploration program uncovered a broad zone containing the potential for significant gold mineralization. However, not much has been said about the Company’s Rivier Project since. 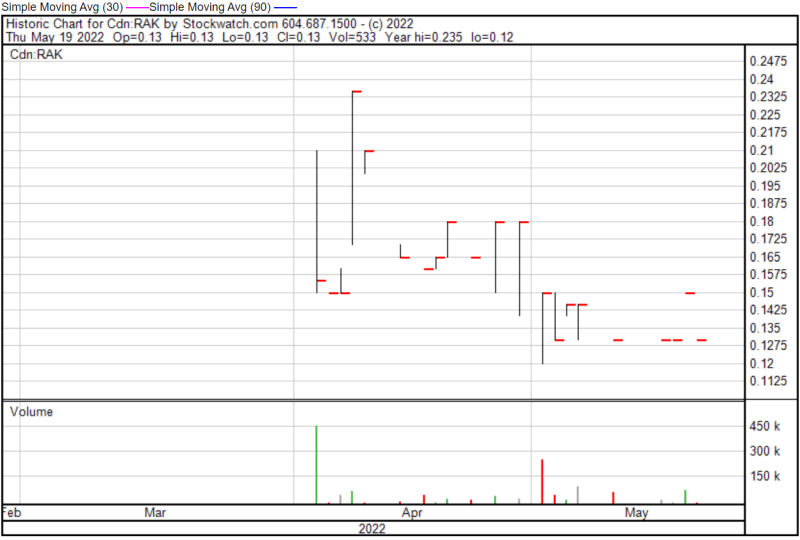 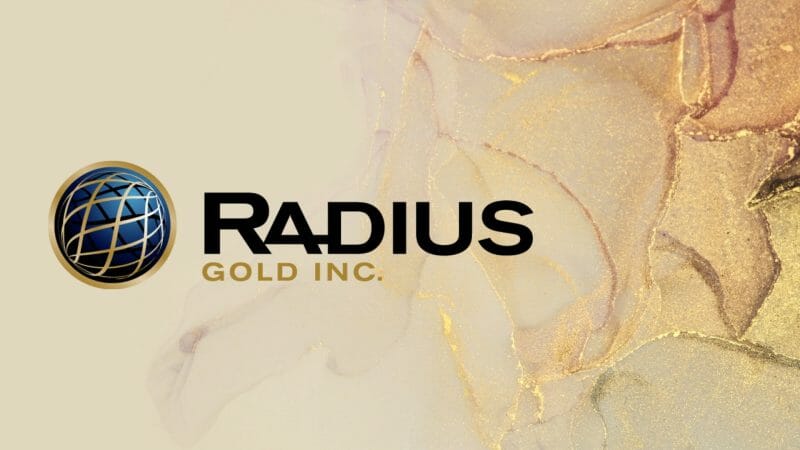 Radius Gold Inc. (RDU.V) is a gold exploration company, however, the Company is also exploring other natural resource opportunities. Over the past two decades, Radius’ management has made several significant gold and silver discoveries. Furthermore, the Company’s management has raised in excess of $400 million from the European and North American equity markets for its various projects, including the development of silver mines and iron ore deposits.

Like Rackla, Radis is part of The Gold Group, a group of companies led by Simon Ridgway. A majority of Radius’ funds have been invested in Latin America, creating employment and enriching the lives of those who have come within the Company’s “radius.” With this in mind, Radius has several projects located in Latin America, including three projects in Mexico and three projects in Guatemala. Here’s a list of each project: 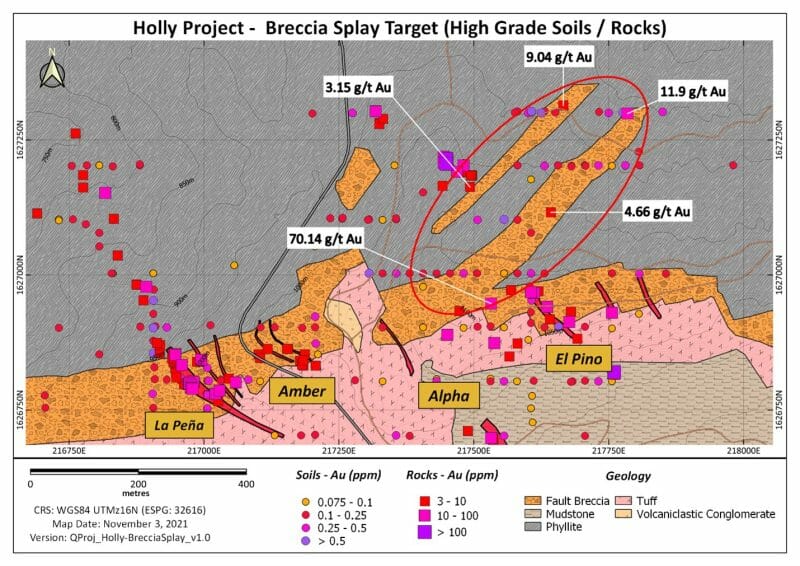 For the sake of relevancy, let’s focus on the Company’s Holly Project in Guatemala. There’s a lot to cover here, but let’s start with the basics. The Holly property is located along the Jocotan Fault, which forms part of the Motagua Zone, a 400-kilometer by up to 80-kilometer wide deformation zone that separates the North American and Caribbean plates. As for results, Radius has discovered multiple high-grade gold and silver occurrences along the Jocotan fault.

To be more specific, the Holly Project has revealed surface results of 396 g/t Au and 7092 g/t Ag (silver). Ongoing drilling has produced results of 4.58 meters at 79.84 g/t Au and 5,053 g/t Au. To date, Radius has conducted limited drilling at the Jocotan Fault zone. In fact, only one vein, La Pena, has more than four drill holes. It should be noted that both the Holly and Banderas properties represent a joint venture between Radius and Volcanic Gold Mines.

On June 1, 2020, Volcanic Gold Mines, a gold and silver company, announced that it had executed an Option Agreement with Radius. According to the agreement, Volcanic can earn a 60% interest in Radius’ Holly and Banderas properties by completing a financing of a minimum CAD$3 million and spending USD$7 million on the exploration of the properties within 48 months from the date that drilling permits are granted. 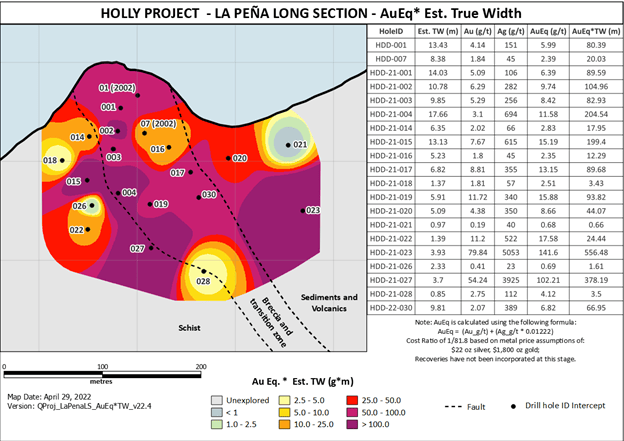 The gold and silver discovery Radius has made at the Holly property is significant. Keep in mind that the Company’s underground mining will not require a processing plant. Moreover, in the near future, Radius plans to establish two mills in operation within trucking distance. 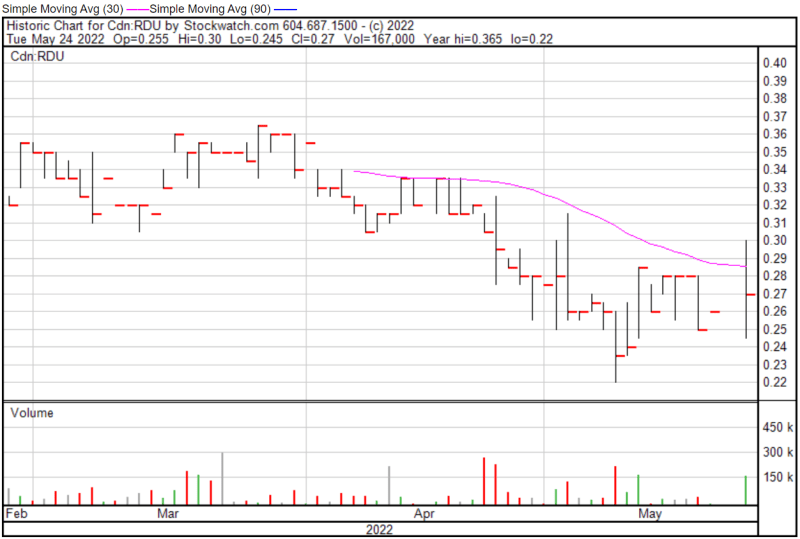