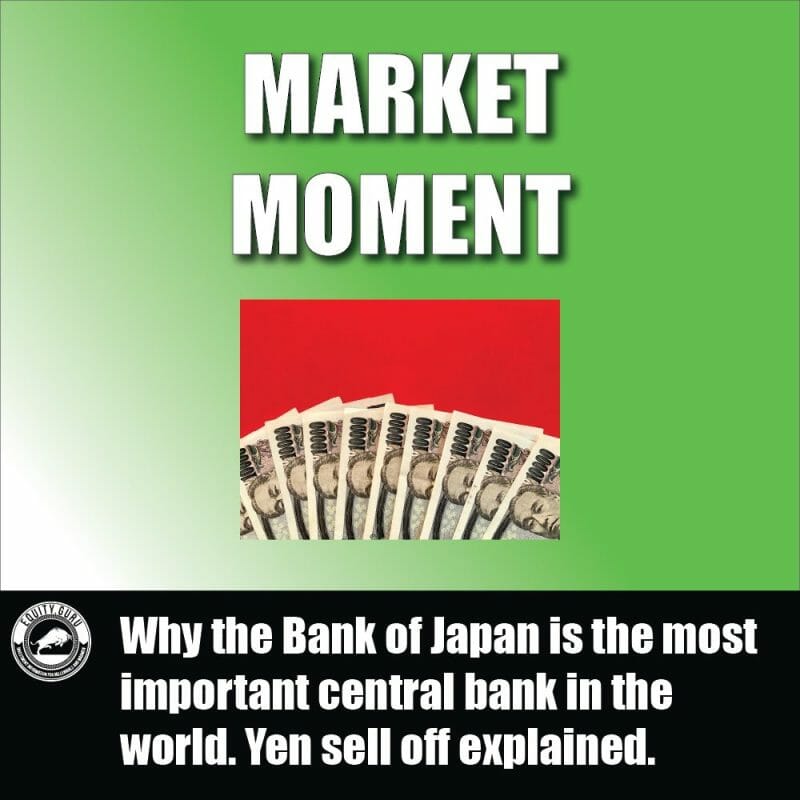 Why the Bank of Japan is the most important central bank in the world. Yen sell off explained.

This article might seem a bit contrarian at first. I am making the case that the Bank of Japan (BoJ) is the most important central bank to watch, and their actions will be the most consequential for your investments, and to put it bluntly, your life.

Some of you are already saying, “boy! Vishal has lost it! The Bank of Japan? Hahaha (kekekek)”. And a few weeks ago, I would have joined many in making this comment. But then I came across the work of Weston Nakamura at Real Vision. A very important video that you should take the time to watch, but I will summarize a lot of the key points in this article.

I was one of those that always ignored the BoJ press conferences because well… It’s the BoJ. This central bank has not changed their statements for the last 50 press conferences. Nobody really expects any change. Until now. And this is where things get worrying.

In this article, I will argue that there might be a George Soros type breaking the Bank of England type trade. Obviously, substitute the Bank of England for the Bank of Japan. Sounds crazy? Well if you don’t follow the forex markets, let me show you what has been happening to the Japanese Yen. 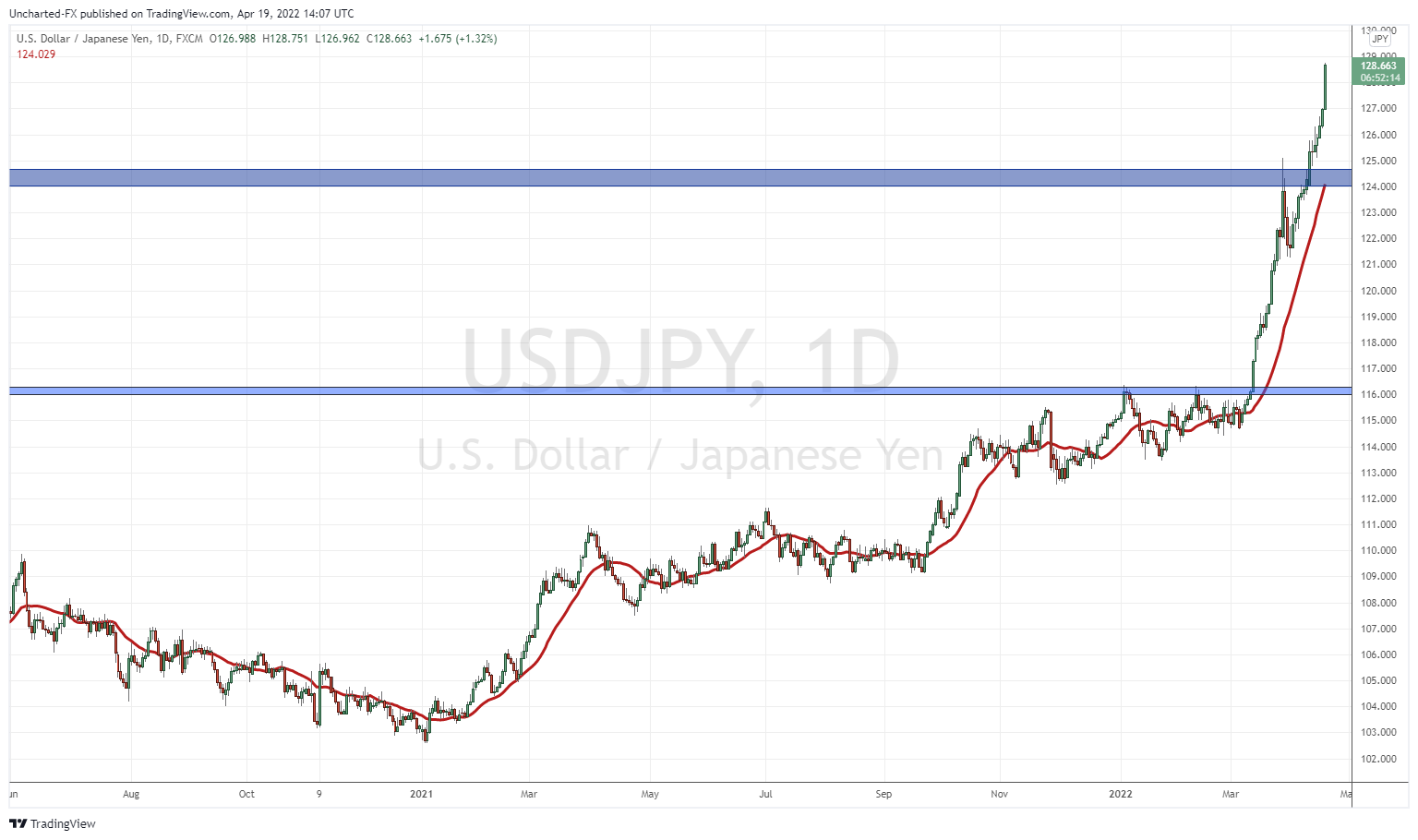 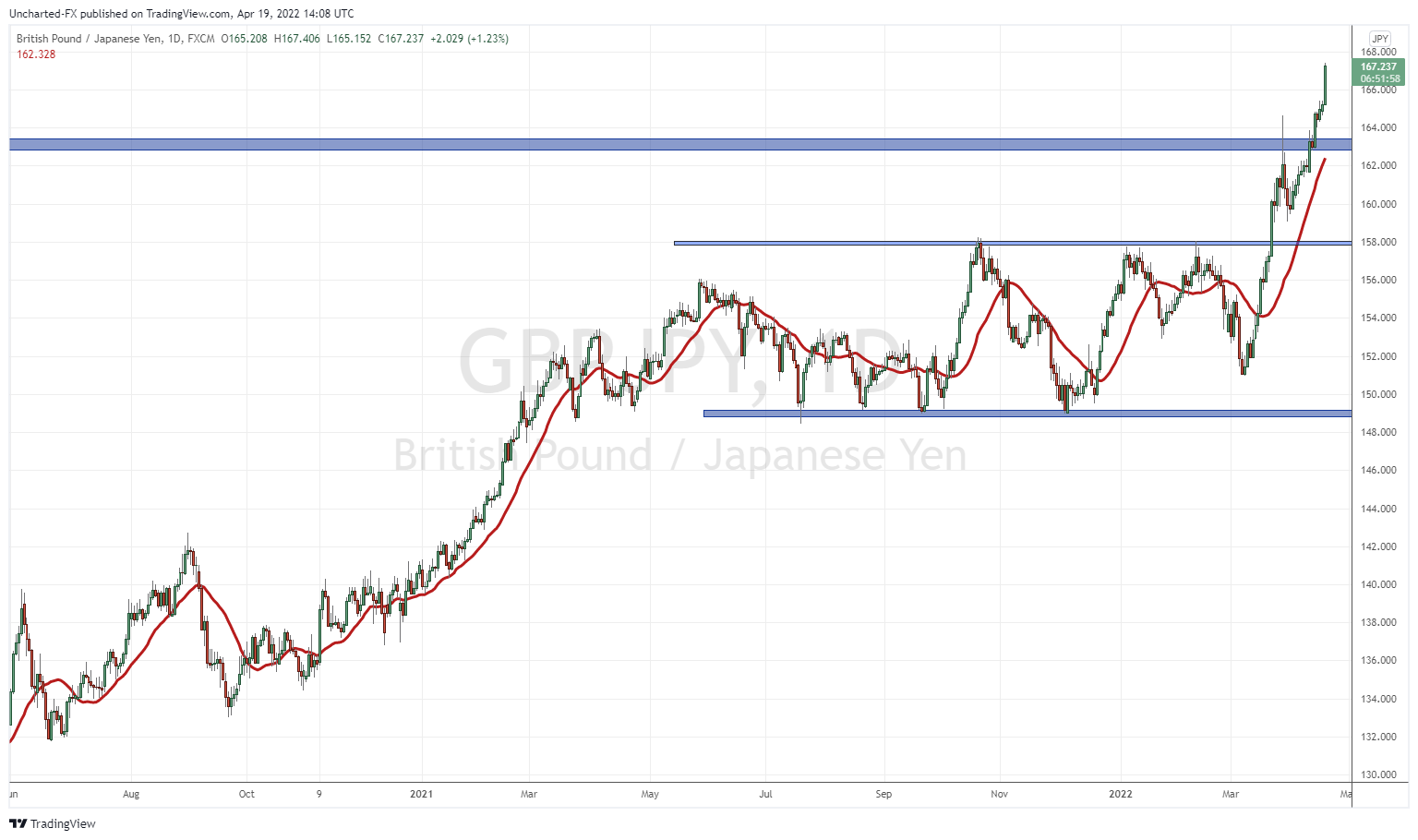 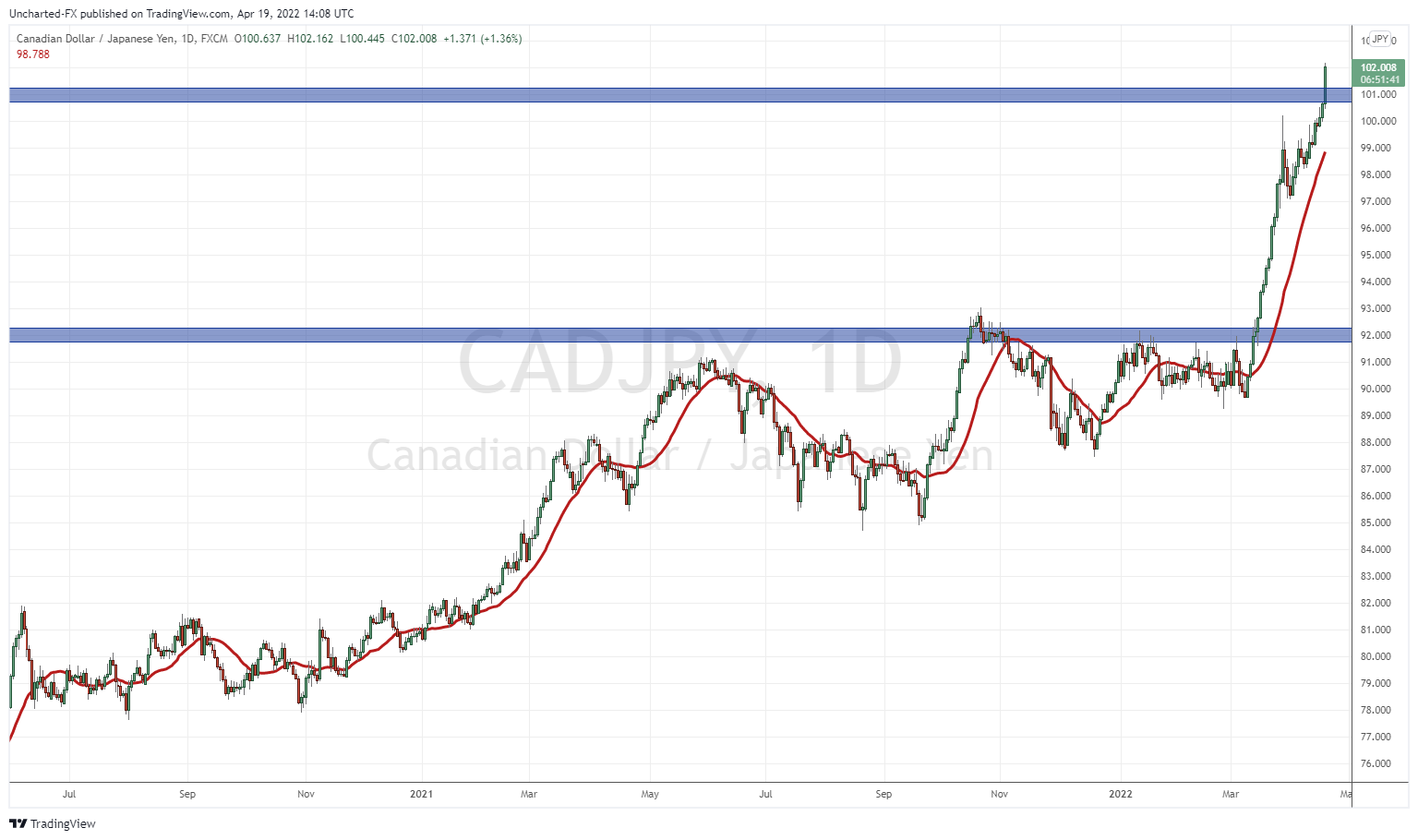 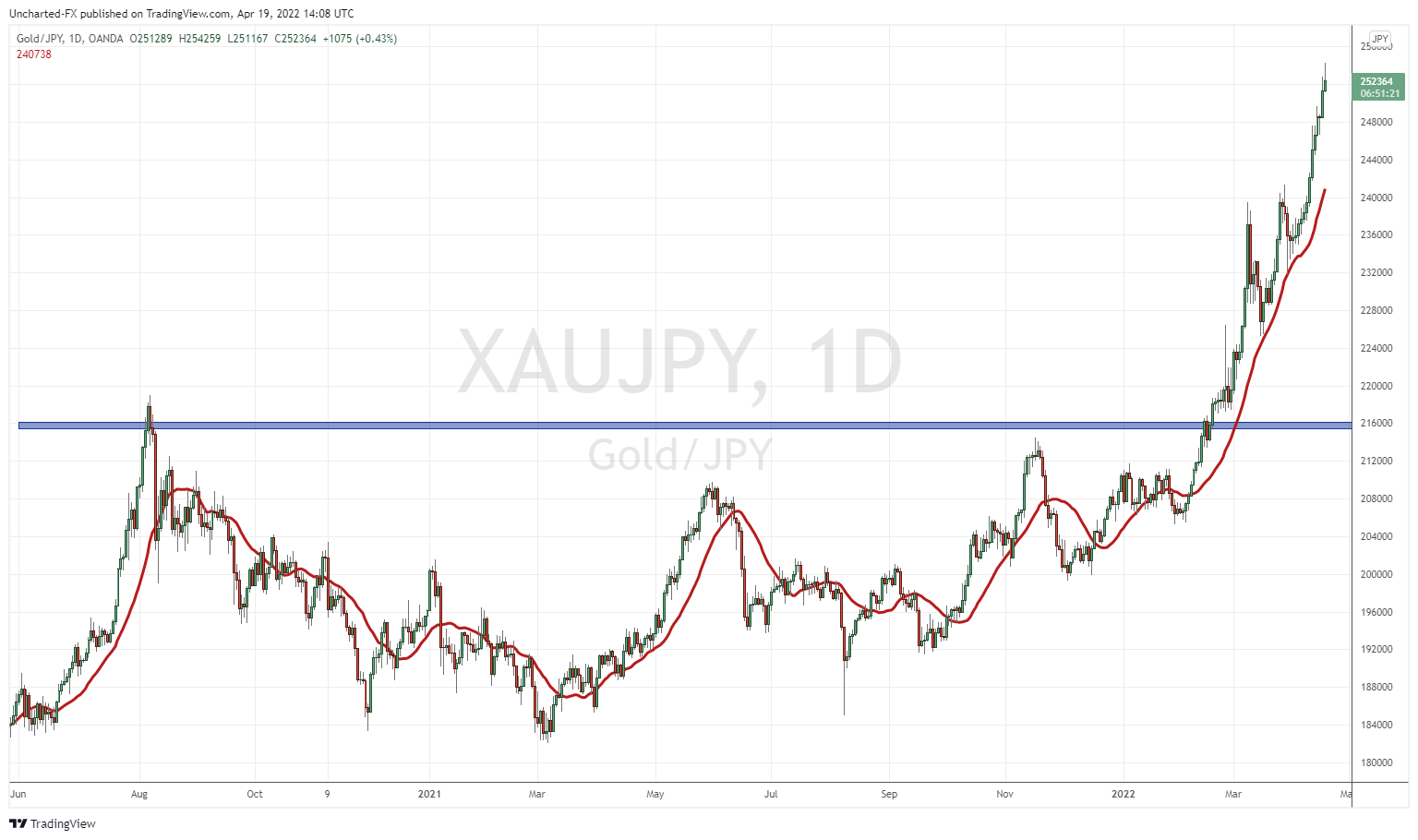 These are just some Yen pairs, but all of them look the same. The Japanese Yen has been the worst performing major currency year to date:

At first many thought this was just a carry trade (borrowing in a low-interest rate currency and converting the borrowed amount into another currency), but then price action got extreme. To add more to the confusion, the Japanese Yen is often seen as a safe haven currency. Japan is politically stable, and the consumer has a lot of savings. In a period of geopolitical and economic uncertainty, many thought the Yen would get a bid. Instead, it is getting clapped.

You came to find out why. So let me try to explain this as simply as possible.

To understand the 30 year deflation Japan has undergone, I suggest checking out the video above. In terms of central banks, the BoJ implemented QE before it was even cool in the US. The BoJ also went to negative interest rates. Bit of a debate whether these policies have worked or not, as stagflation still seems to be in control of Japan. But the BIG question here is if the BoJ will remain one of the ONLY easy money policy central bank while other major central banks are raising rates.

Essentially, some contrarians are saying that the Bank of Japan will need to RAISE interest rates.

Some of you have probably heard that Japan has not been seeing any inflation. Inflation is still coming in well below 1%. The truth is the producers are eating the costs rather than passing the costs to consumers. The Japanese Producer Price Index has been coming in quite high. And I mean really high. We are talking about over 9% for the last 5 months. The question is how long can Japanese producers keep eating these costs? 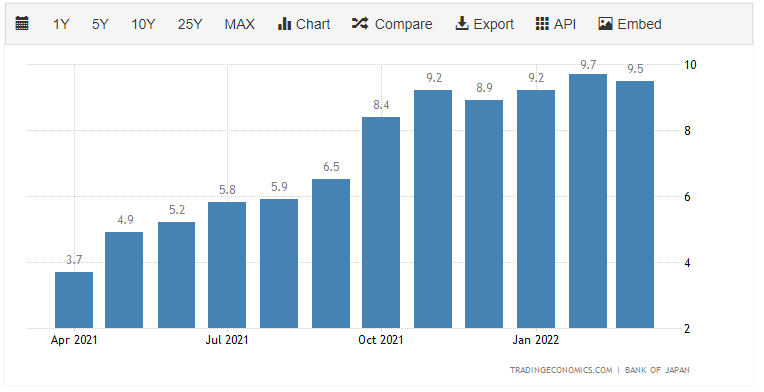 It gets a bit complicated as the BoJ also buys stocks and corporate bonds. So basically, if these companies need the cash, the BoJ can just buy more so the companies can keep eating up the costs.

The Japanese consumer is also picky with prices. Prices just don’t change. If a product increases by 10 yen, or 10 cents, mad drama happens. Companies apologize for even a small change. This is also why we hardly see any price changes leading to increased inflation.

If the producers had to start passing these costs to the Japanese consumer, then we would begin to see the all elusive inflation. I mean inflation above 2%. Currently, it still comes in below 1%. You all have heard about the bond market pricing in recession. The yield curve inversion and the 2 year and 30 year inverting for the first time since 2007 was recently major headlines. Well, there is some mad action happening in the Japanese Government Bond market. And this is where the ‘breaking the Bank of Japan” trade comes in.

Japan as we all know has set interest rates at -0.10%. The Japanese 10 year government bond is set at 0%. So who would be buying these bonds? Well nobody really unless you want to trade bond prices. This is precisely for this reason the Bank of Japan owns almost a half of all JGBs.

We will get back to the 10 year JGB. Let’s first talk about bonds.

It might seem odd today, but pre 2008, when you were close to retirement or about to retire, you would purchase government bonds with the money you saved up. For argument’s sake, let’s say you saved $1 million. If you buy government bonds for 10 years yielding above 5%, you would get $50,000 or higher per year. Not too shabby of an amount when you are retired.

Bonds are technically the safest investment because most governments don’t default (ignore Argentina). They can always raise taxes to pay out the coupons. Post 2008, bond yields dropped dramatically and haven’t recovered. If I was to retire post 2008 with $1 million and wanted safe bonds, I would be getting somewhere between $20,000-$30,000 per year. Not too much.

So where did this money go? Yup you guessed it, the next safest asset. Real Estate. Hence why we see real estate bubbles around the world. As a financial advisor, you wouldn’t suggest the risky and volatile stock market to someone who was about to retire because they could lose a lot of their money and would have to post pone their retirement plans if the stock market tanked.

Fast forward to today. Bonds don’t yield much. Real estate in some parts of the world is very expensive. Where I live, people are already paying $900k for apartments. And factoring in costs and property tax deter some away from rental properties. The stock market is the only place to go for yield, hence why we are seeing tons of retail money AND pension funds run into stocks. But this craziness and its implications are for another article. But I hope you can see what would happen if the stock market really crashed.

Some of you know that the Japanese are big savers. Some people forget the wealth that was created in Japan during the bubble economy. Their baby boomer generation is still sitting on cash that requires yield. The Nikkei has finally recovered, seeing price levels not seen since 30 years. Japanese real estate is still deflating slowly so why buy when you can buy it cheaper the following year? You can’t go into JGB’s because they yield absolutely nothing. So where did this money go?

Well folks, the truth is that this money has been going overseas. Mainly into US treasuries hence why Japan, not China, is the largest foreign holder of US debt. This is mainly due to the Bank of Japan’s policy of artificially keeping interest rates low. Since Japan hasn’t seen inflation for decades, a 2% yield from US treasuries is still pretty major for Japanese investors using profits to buy things in Japan.

The BoJ practices yield curve control to keep yields low.  This is a term you should embed deep into your brain for I am sure the ECB and perhaps even the Fed may go down this path. Effectively, the BoJ yield curve control is also yield curve control for US treasuries. The main reason why US treasury yields are low is because of Japanese (and other foreign buyers), but mainly Japanese since they can’t get yield on domestic JGBs. When you buy bonds, the yield drops. It is really because of Japan that the US government can have massive deficits and do crazy spending at low interest rates.

And this could be about to change.

Let’s get to the MAJOR drama. 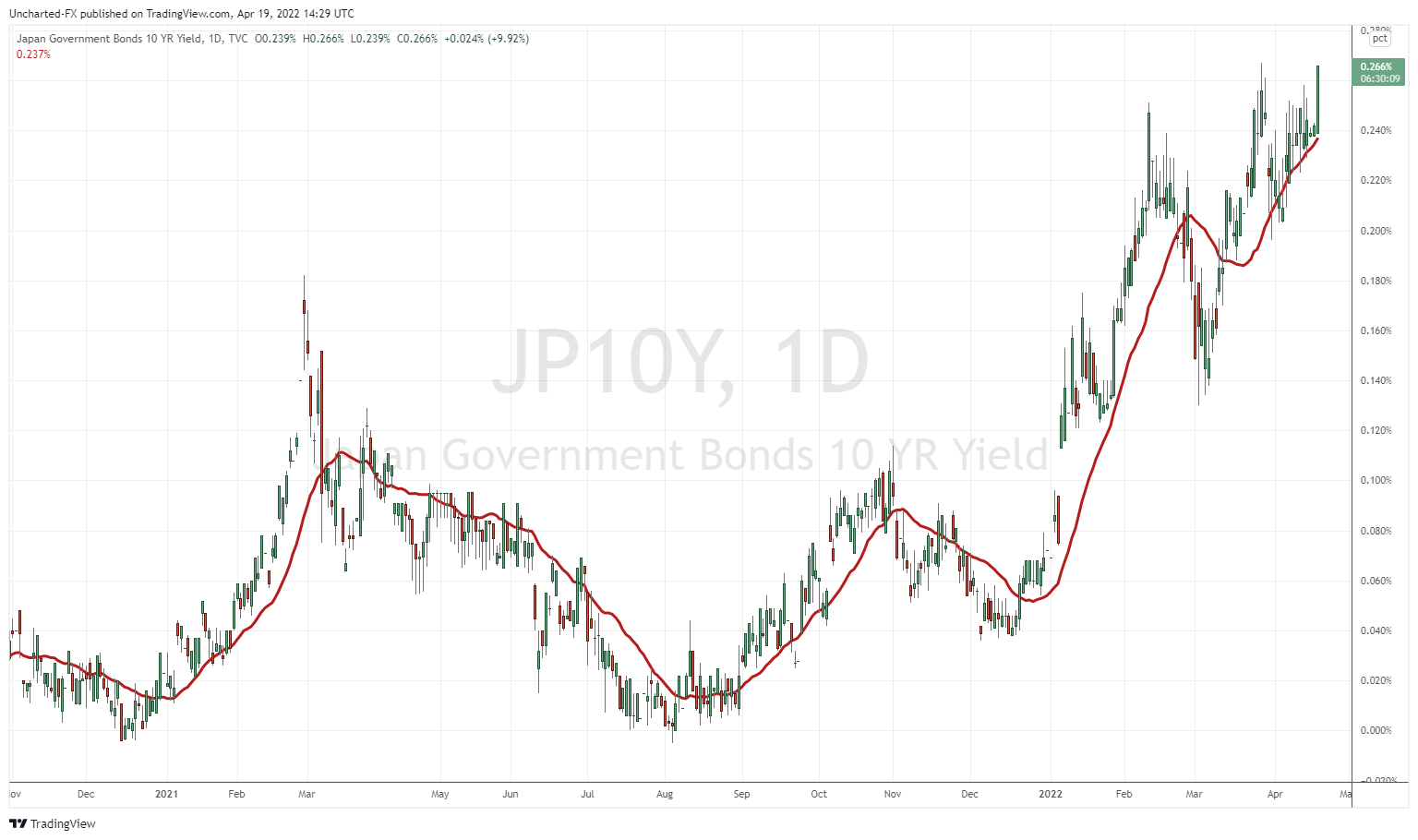 With interest rates rising, the 10 year JGB all of a sudden jumped into positive territory. Remember, the JGB targets 0% under yield curve control. Now we are rising, hitting 0.26%. So how does the Bank of Japan bring yields down? By buying bonds. They announce fixed market operations meaning the BoJ states they will buy an unlimited number of bonds at any yield. The idea is yields will drop. Remember the inverse relationship between bond price and yields. When you buy bonds the yield drops and vice versa. Since the BoJ has the printing press, they can buy up as much to bring yields down.

But this hasn’t been happening, or not to the extent the market thought it would. Yields on the 10 year JGB are still holding up and are climbing! This goes back to the idea of the BoJ being the only major central bank in the world to keep loose monetary policy on while the rest are tightening.

Contrarian investors are betting the BoJ will fail at holding yields down, or that they will let yields rise. Hence why the Yen is feeling the pressure. A major shift in Japanese monetary policy, something not many were even considering. As I explained above about Japanese investors buying US debt, a rise in JGBs would be huge. Japanese wealth may start purchasing JGBs that are yielding something as opposed to foreign bonds. Buy domestic rather than foreign. This has huge repercussions for the US.

Now can Japan cope with raising interest rates? A good question, and in fact, you can ask the same question when it comes to the US, Canada and other western economies. Have we become addicted to cheap money? If interest rates rise by only a small amount, would that be enough to cause a recession and possibly even worse? My honest opinion is that interest rates will be rising until something breaks. I am a bit doubtful we will even get to see the Fed’s 6-7 rate hikes this year.

If interest rates are going to rise, then the Bank of Japan will have to follow along. This would have major ramifications for the world and would be the biggest financial event in current history. Keep your eyes on that JGB and the Japanese Yen. Big moves are happening which could snowball into a financial avalanche. We are already seeing major moves as I write this article with the JGB popping above 0.26% and the Japanese Yen tanking. The BoJ is failing to hold the 0% yield for 10 year JGBs.

Of course if we do see some sort of deflationary event and western central banks have to resort back to cheap money and turn dovish again, then the Bank of Japan can remain loose with their monetary policy. If this happens, the Bank of Japan can continue with their current policy and Japanese money will still flow overseas. The positive? We avoid the biggest financial event in current history.

To end off, I highly recommend this book for those wanting to understand how the Bank of Japan created the amazing economic recovery and boom… and subsequent crash. Japanese stagflation is relevant today because it could be the best case scenario for the US and other western nations. I am referring to “Princes of the Yen” by Richard Werner.

For those that prefer video format, an independent documentary was created: