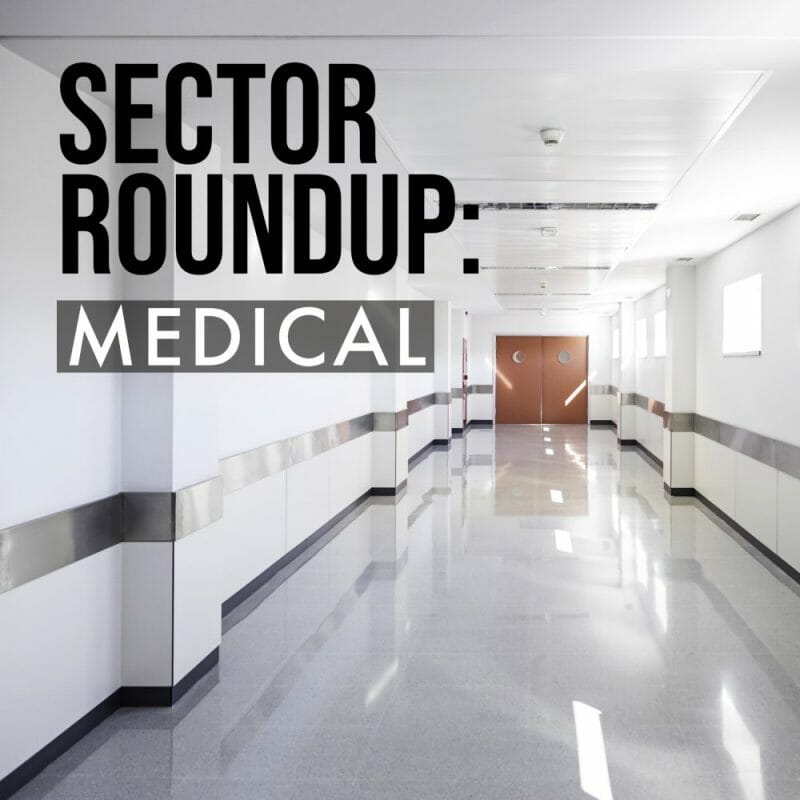 I have always been a sucker for nostalgia. When I first started writing for Equity Guru, I spent most of my time covering biotechnology companies. Whether they were a walking dumpster fire or a genuinely interesting company, if it piqued my interest I covered it. Taking a look at my watchlist, I noticed quite a few of these companies that were previously in the red were now green. In this week’s Sector Roundup, let’s find out why. 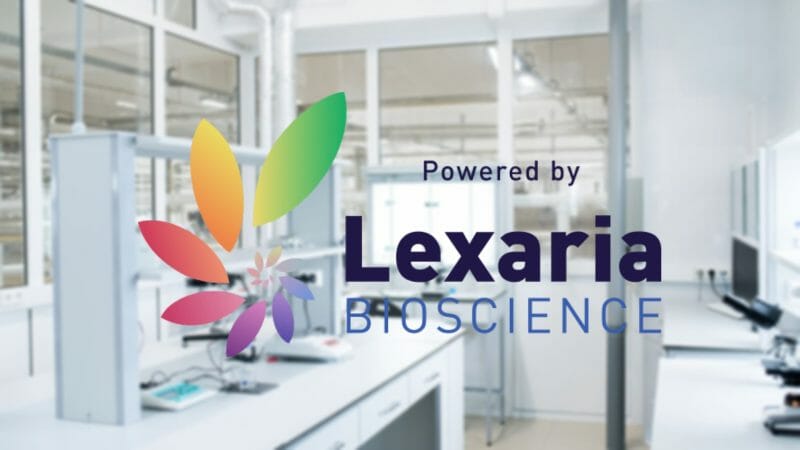 Lexaria Bioscience Corp. (LEXX.Q) is a biotechnology company recognized for the development of DehydraTECH™, the Company’s proprietary drug delivery technology. In addition to enhancing the speed and efficiency of orally-delivered fat-soluble active molecules and drugs, the Company has also demonstrated early-stage effectiveness in improving delivery through human skin for the potential development of topically-administered products. This included patches, creams, and lotions.

Development for DehydraTECH began in 2014 and has since blossomed into something quite impressive. Through various animal studies evaluating the quantity of drug delivery across the blood-brain-barrier (BBB) utilizing DehydraTECH technology, data suggests a gain of as much as 1,900%. With this in mind, Lexaria’s DehydraTECH has the potential to improve the delivery of certain central nervous system (CNS) targeted drugs against Alzheimer’s Disease, Parkinson’s Disease, and other CNS diseases.

Most recently, on February 2, 2022, Lexaria announced positive findings in an animal study evaluating DehydraTECH processing of sildenafil for potential application in the management of erectile dysfunction, which is great news for me! I am kidding…or am I? Data demonstrated a clear trend toward faster and higher overall delivery of sildenafil, a drug sold under the name Viagra among others, into the bloodstream over the course of the study.

While it may seem like Lexaria is a one-trick-pony biotechnology company, the Company’s DehydraTECH technology is incredibly versatile. Its drug delivery capabilities open the door to a variety of sectors including pharmaceuticals, beverages, and micro-dosing. To date, Lexaria has secured patents for cannabinoids for hypertension and CNS disorders, nicotine, vitamins, and non-steroidal anti-inflammatory drugs (NSAIDs). 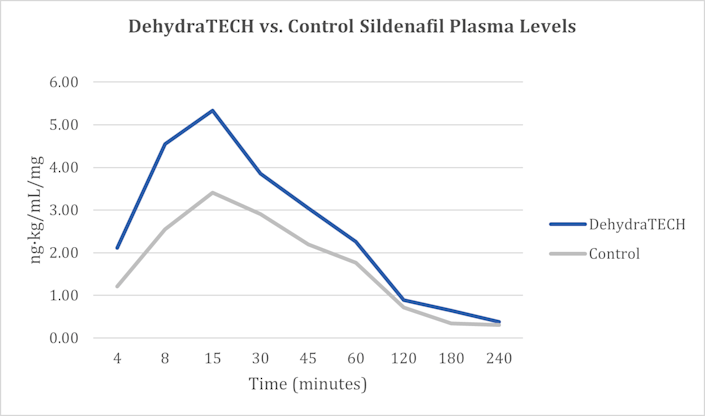 efficacy of DehydraTECH biotech versus Sildenafil

Lexaria has also filed patents for phosphodiesterase inhibitors like sildenafil, estrogen, testosterone, and anti-viral drugs, to name just a few. Don’t get me wrong, the prospect of rats hopped up on Viagra is interesting, to say the least, however, I would like to see how these results translate in human testing. Historically, Lexaria’s DehydraTECH has demonstrated efficacy in human clinical studies, so I am hopeful. 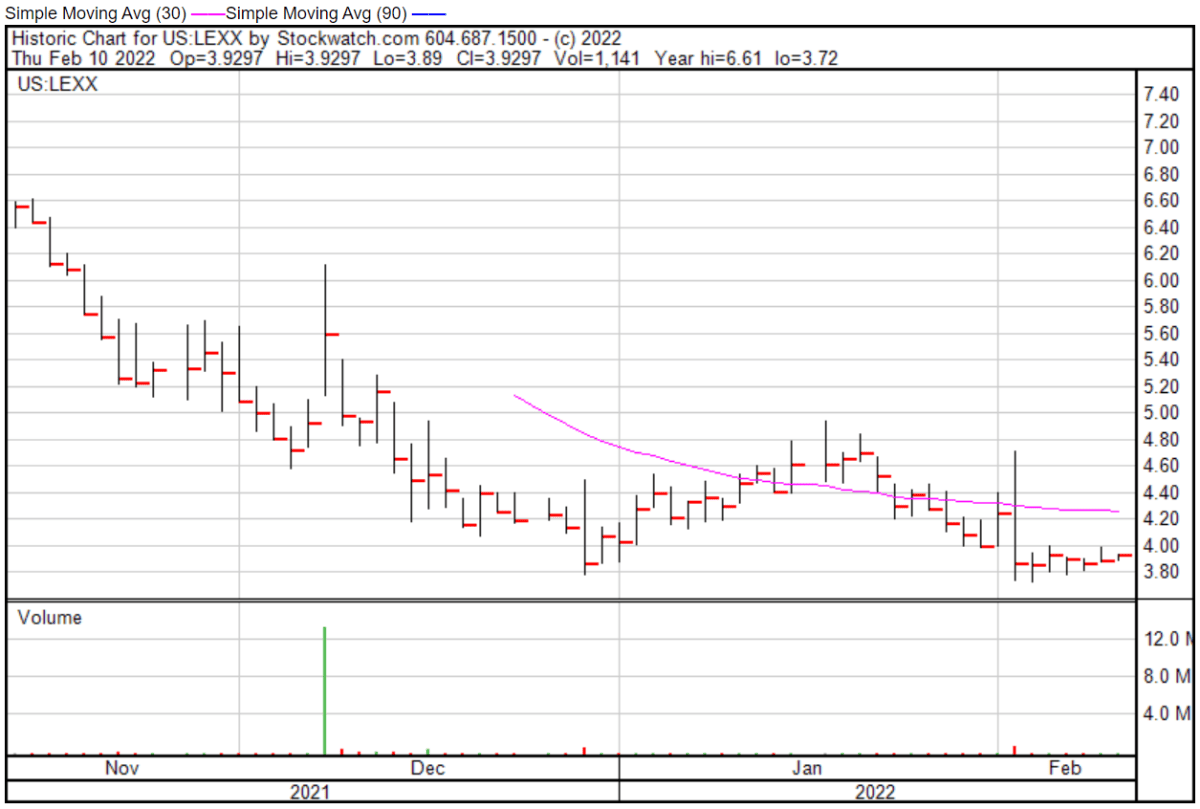 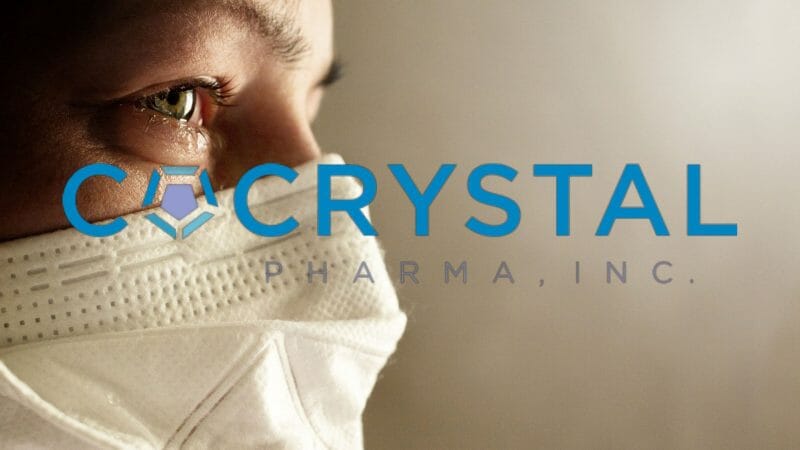 To date, Cocrystal has identified promising preclinical antiviral therapeutics that target the replication process of the influenza virus, SARS-CoV-2 virus, and gastroenteritis caused by norovirus. Additionally, the Company has completed a Phase IIa trial targeting the hepatitis C virus. Regarding COVID-19, Cocrystal is pursuing the development of novel antiviral compounds for the treatment of coronavirus infections using its proprietary drug discovery platform. 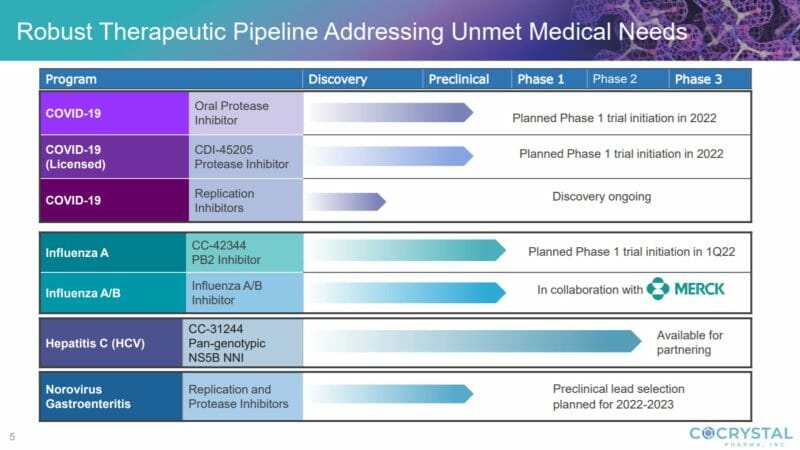 It is worth noting that CDI-45205 is still in the preclinical phase, however, on January 6, 2022, Cocrystal announced the receipt of guidance from the U.S. Food and Drug Administration (FDA) for the further development of CDI-45205 for COVID-19. Having submitted a pre-Investigational New Drug (IND) application in October 2021, Cocrystal now has the insight to initiate a Phase I study, which the Company expects to launch in 2022.

“The FDA’s guidance marks an important milestone in our continued development of CDI-45205. We now have a clearer pathway for our planned Phase 1 single-ascending-dose and multiple-ascending-dose study that we expect to initiate in 2022, as well as directives for designing a subsequent Phase 2 study,” commented  Sam Lee, Ph.D., President and interim co-CEO of Cocrystal.

Labeled CDI-988 and CDI-873, both drug candidates exhibited superior in vitro potency against SARS-CoV-2 with activity maintained against current variations, including omicron. Moving forward, Cocrystal plans to initiate a first-in-human trial with one selected candidate as soon as possible sometime this year. 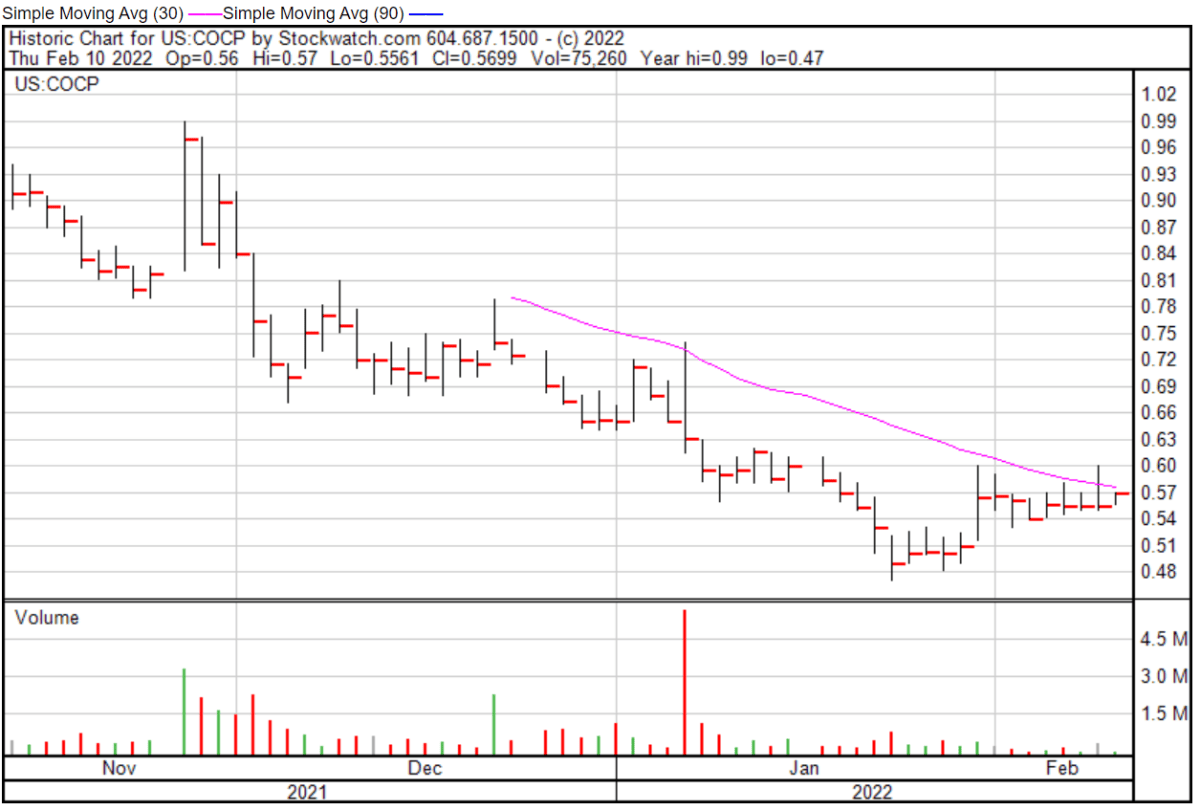 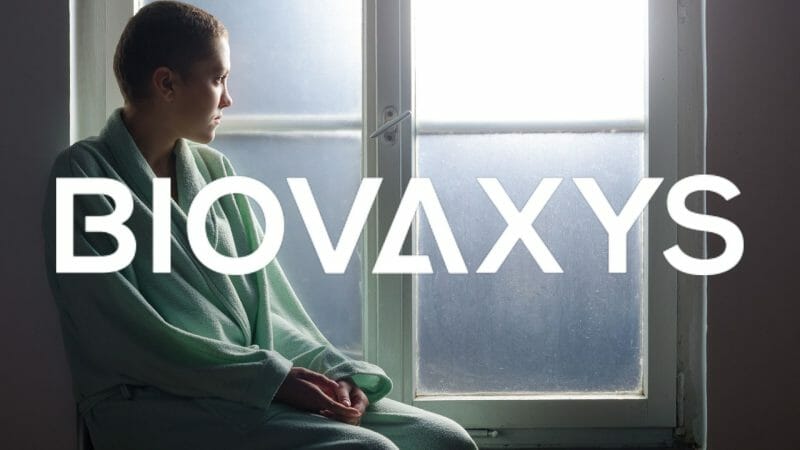 BioVaxys Technology Corp. (BIOV.C) is a clinical-stage biopharmaceutical company developing anti-viral and anti-cancer vaccine platforms. Currently, the Company is evaluating a potential SARS-CoV-2 vaccine based on its haptenized viral protein technology. BioVaxys is also advancing a compassionate use trial in the EU to evaluate its haptenized cell vaccine for late-stage ovarian cancer.

Normally, I would jump on any sort of company pursuing cancer research, however, BioVaxys hasn’t really done much since I last covered them on August 4, 2021. Look, I get it. Pharmaceutical companies are slow-moving, but looking at the Company’s one-year chart, there’s a whole lot of nothing. Just an empty plateau with the occasional unimpressive hill.

That’s not to say the Company’s technologies aren’t the real deal. However, BioVaxys’ presence has been lacking as of late. Prior to the Company’s two press releases this month so far, BioVaxys’ last press release was December 7, 2021, announcing a research collaboration with the Ohio State University. However, BioVaxy does have a number of products in the oven, including BVX-0320, BVX-0121, BVX-0204, BVX-0918A, BXV-0918C, Papilocare®, and Covid-T. 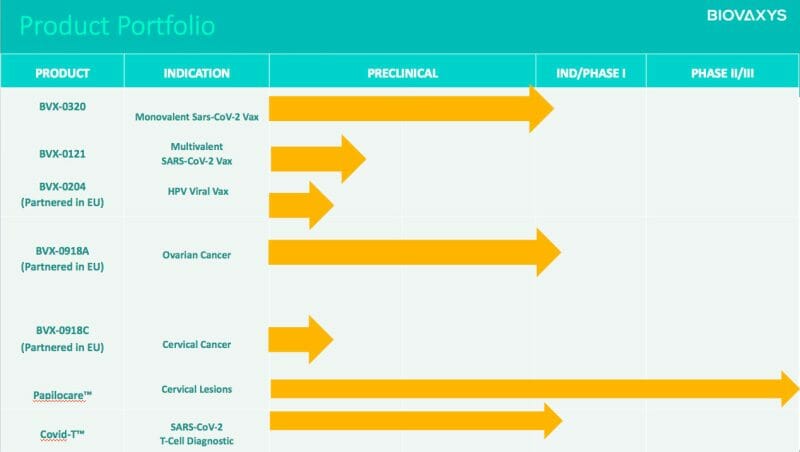 While most of the Company’s products are in their preclinical phase, BioVaxys’ CoviDTH® represents the world’s first low-cost, disposable, diagnostic for identifying a T-cell immune response to the presence of SARS-CoV-2. By injecting a small amount of test material, such as the SARS-CoV-2 spike protein, intradermally via CoviDTH, the injection site can then be inspected for erythema and induration 24-48 hours later.

In other words, if the injection site breaks out in a rash or the area becomes firm, health care providers can visually ascertain the presence of SARS-CoV-2. With this in mind, CoviDTH is an accessible diagnostic tool that does not require extensive medical experience to analyze results. While this is great, the Company’s growing net loss and cash burn have me concerned. 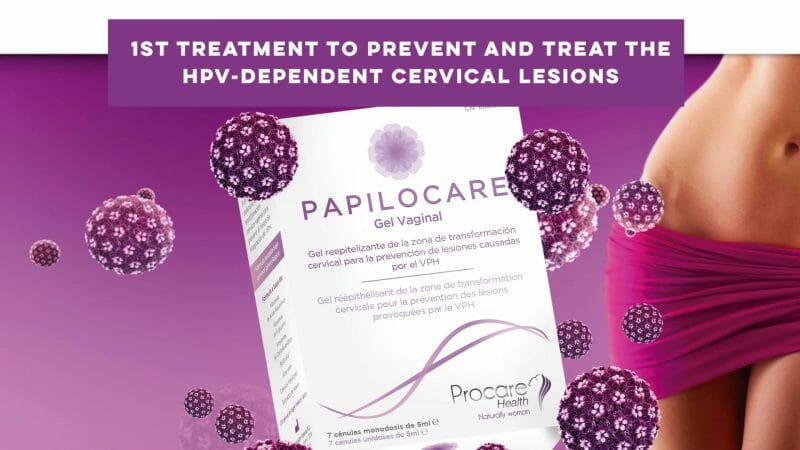 With this in mind, on February 10, 2022, BioVaxys announced that it has closed the first tranche of its previously announced non-brokered private placement. Pursuant to the first tranche of the private placement, the Company has issued 2,680,000 units at a price of $0.15 per unit for gross proceeds of $402,000. Each unit consists of one common share and one whole common share purchase warrant.

Each warrant is exercisable for one additional common share at an exercise price of $0.30 for a period of 36 months. The aggregate private placement consists of the sale of up to 6,666,667 units for total gross proceeds of up to approximately $1,000,000. The closing of the second tranche is expected to be completed within the next week.

Personally, I am curious to see where BioVaxy goes. I like the Company’s products and their pipeline looks promising. Furthermore, through joint commercialization and marketing collaboration with Procare Health, BioVaxys has the right of refusal (ROF) to market Papilocare, the world’s first and only product to prevent and treat HPV-dependent cervical lesions, in the US.

Keep in mind, on May 24, 2021, BioVaxys appointed Charles J. Dunton, MD, as an Advisor to help provide additional support for BVX-0918A, the Company’s ovarian cancer candidate, and the Company’s planned marketing and sale of Papilocare in the US. Piecing together the puzzle, all signs point towards the upcoming commercialization of Papilocare in the US, which would represent a significant milestone for BioVaxys, a company holding ROF for Papilocare. 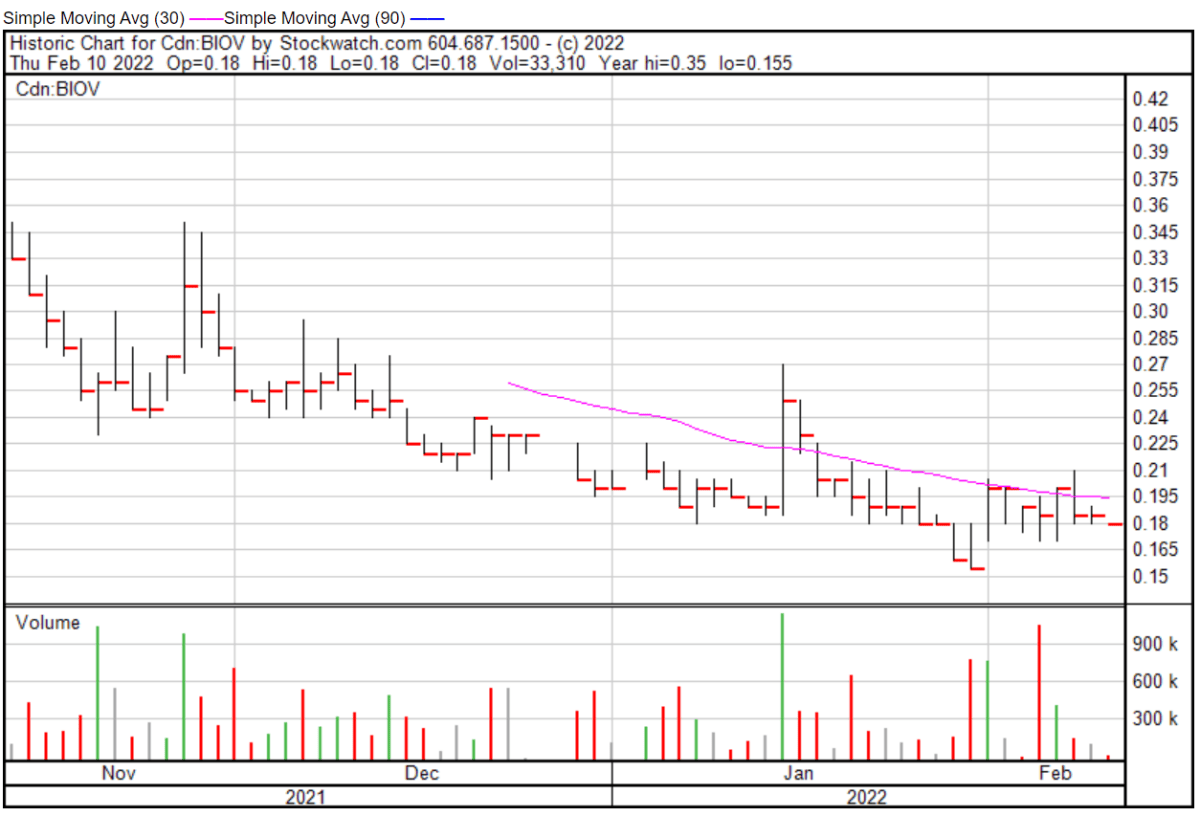 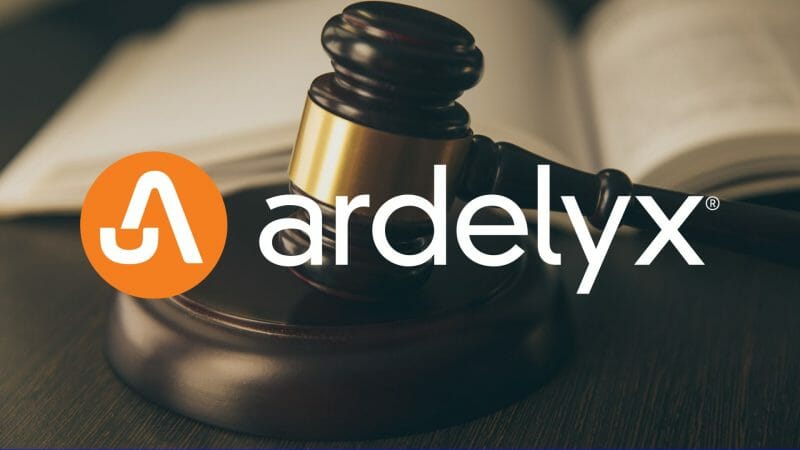 Ardelyx Inc. (ARDX.Q) is a biopharmaceutical company focused on the discovery, development, and commercialization of innovative medicines to improve treatment for people with kidney and cardiorenal diseases. The Company is recognized for the development of tenapanor, a first-in-class, minimally absorbed, and small-molecule inhibitor currently approved by the FDA under the brand name IBSRELA® for the treatment of Irritable Bowel Syndrome with Constipation (IBS-C).

In addition to IBS-C, Ardelyx was investigating the potential of tenapanor for the treatment of hyperphosphatemia, an electrolyte disorder in which there is an elevated level of phosphate in the blood. This can result in a range of symptoms including muscle cramps, joint pain, and weak bones. Before we go any further, I should probably explain that Ardelyx is a company worth staying away from right now.

Following a lawsuit filed against the Company by a long-term stockholder, Ardelyx has had its hands full. That being said, there isn’t any “latest news” worth talking about aside from the lawsuit itself, which was filed on July 30, 2021. Before we talk about that, let’s take a trip to the past. After all, this Sector Roundup is based on nostalgia.

On June 30, 2020, Ardelyx announced the submission of a New Drug Application (NDA) for tenapanor to the FDA for the control of serum phosphorus in adult patients with chronic kidney disease (CKD) on dialysis. A few months later, on September 15, 2021, Ardelyx announced that the FDA had accepted its NDA. Despite leading investors to believe tenapanor had the potential for approval, on July 29, 2021, the Company announced that it had received a Complete Response Letter (CRL) from the FDA requesting that Ardelyx:

“…conduct an additional adequate and well-controlled trial demonstrating a clinically relevant treatment effect on serum phosphorus or an effect on the clinical outcome thought to be caused by hyperphosphatemia in CKD patients on dialysis,” excerpt from CRL.

Now here’s where things get spicy. The lawsuit filed against Ardelyx on July 30, 2021, is investigating whether the board of directors of Ardelyx has breached its fiduciary duties for the Company. In other words, Steven Strezak, the plaintiff representing the long-term shareholder, has accused Ardelyx of breaching the trust of its investors.

More specifically, the complaint alleges that between August 6, 2020, and July 19, 2021, Ardelyx made materially false and misleading statements regarding tenapanor and the likelihood that it would be approved by the FDA. Furthermore, the complaint alleges that the defendant, Ardelyx, possessed, were in control over, and, as a result, knew, or had reason to know, that the data submitted to support the Company’s NDA was insufficient in that it showed a lack of clinical relevance of the drugs’ treatment effect, making it foreseeable likely, if not certain, that the FDA would not approve the drug.

Translation: the plaintiff has accused Ardelyx of feeding bullshit to its investors knowing full well that the Company’s tenapanor would not be approved by the FDA for the indication outlined in its NDA.

The main gripe investors have with Ardelyx is the fact that the Company boasted initial acceptance of its NDA in every press release and quarterly filing following the news. Furthermore, Ardelyx gave the impression that data generated in various Phase III studies evaluating tenapanor was “significant.” In reality, the FDA outlined in its CRL that the magnitude of treatment effect observed in clinical studies was small and of unclear significance.

Bottom line, Ardelyx isn’t worth your time, at least not right now. Once the dust settles and the Company learns to be a little bit more transparent with its investors, then maybe Ardelyx might be worth looking into. Needless to say, Ardelyx has suffered some pretty serious losses, with the Company’s shares plummeting $9.71 per share, or nearly 74%, closing at $2.01 per share on July 20, 2021. 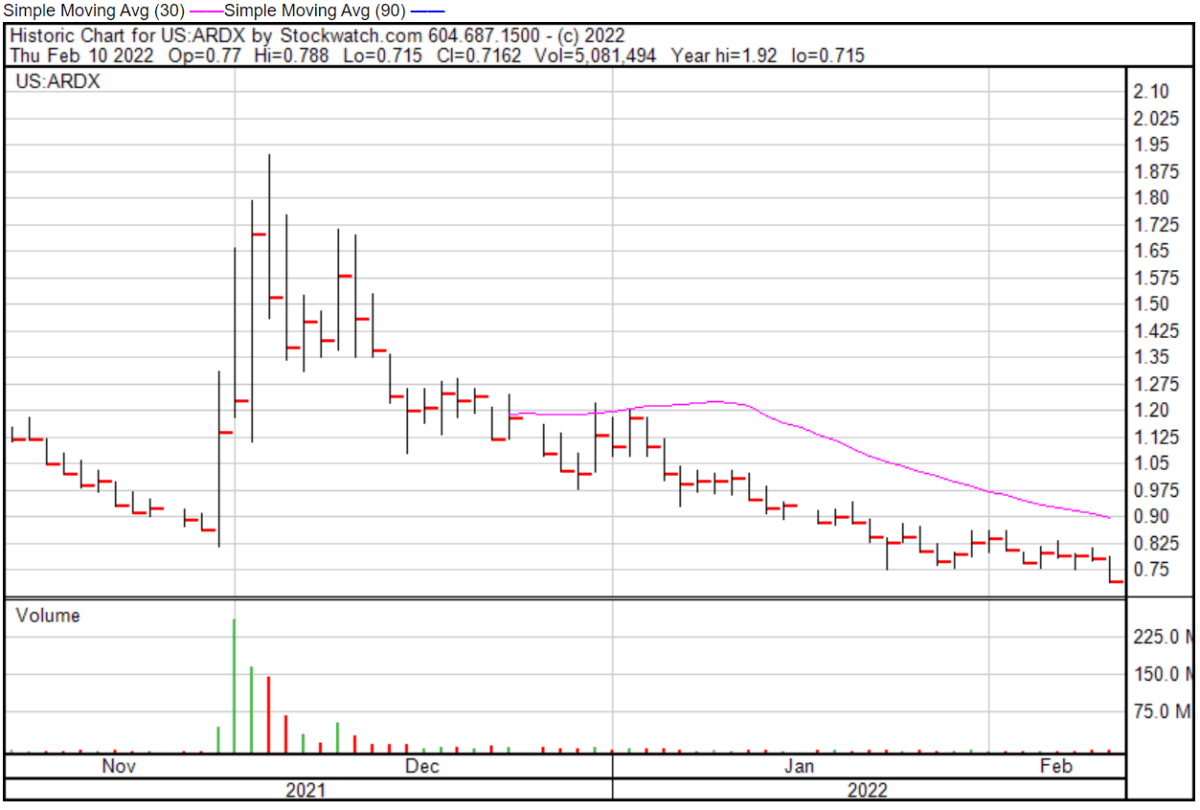 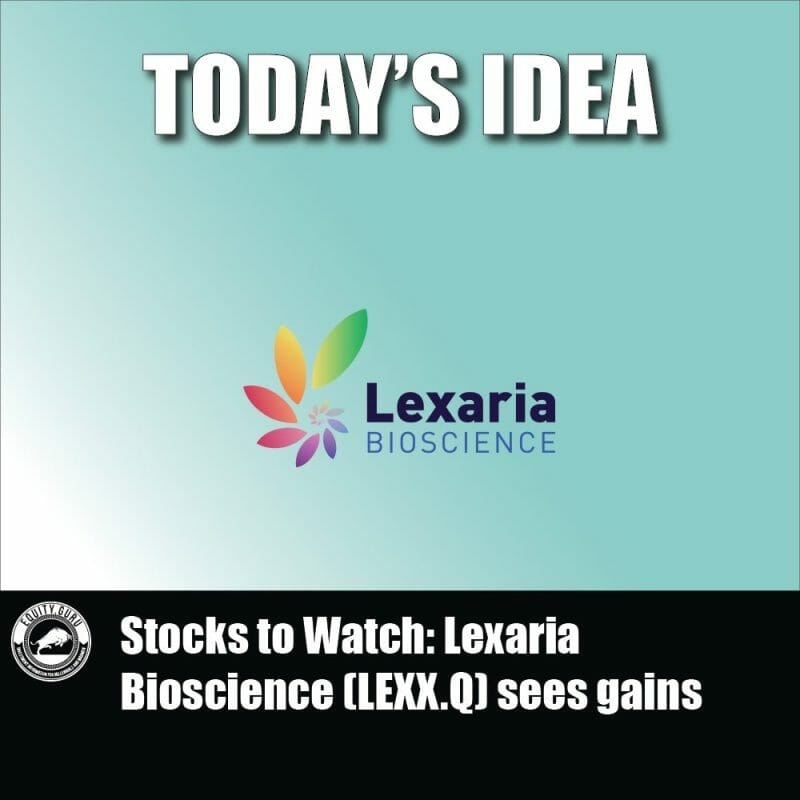 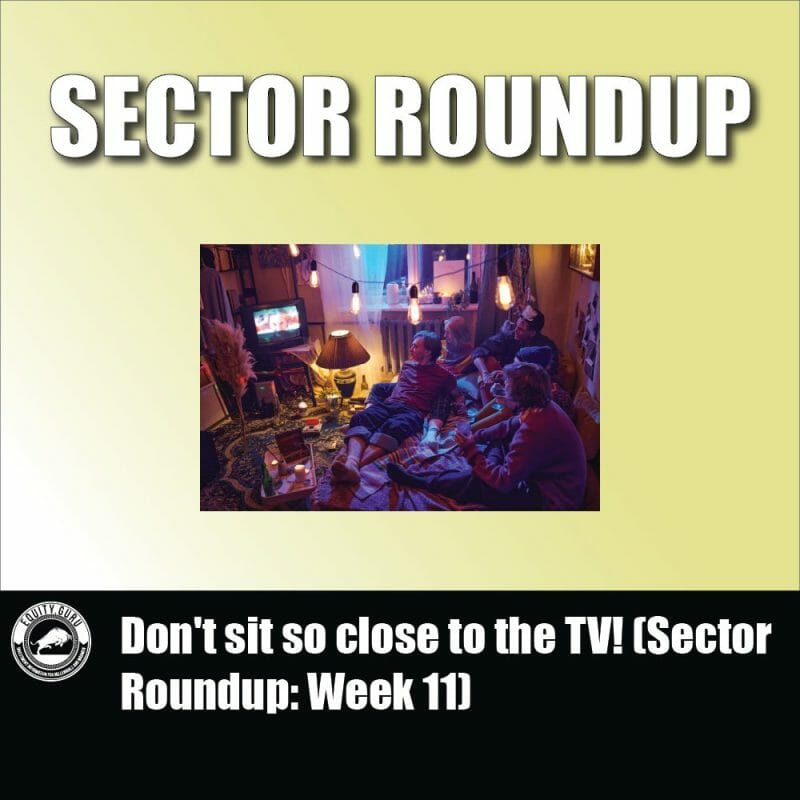 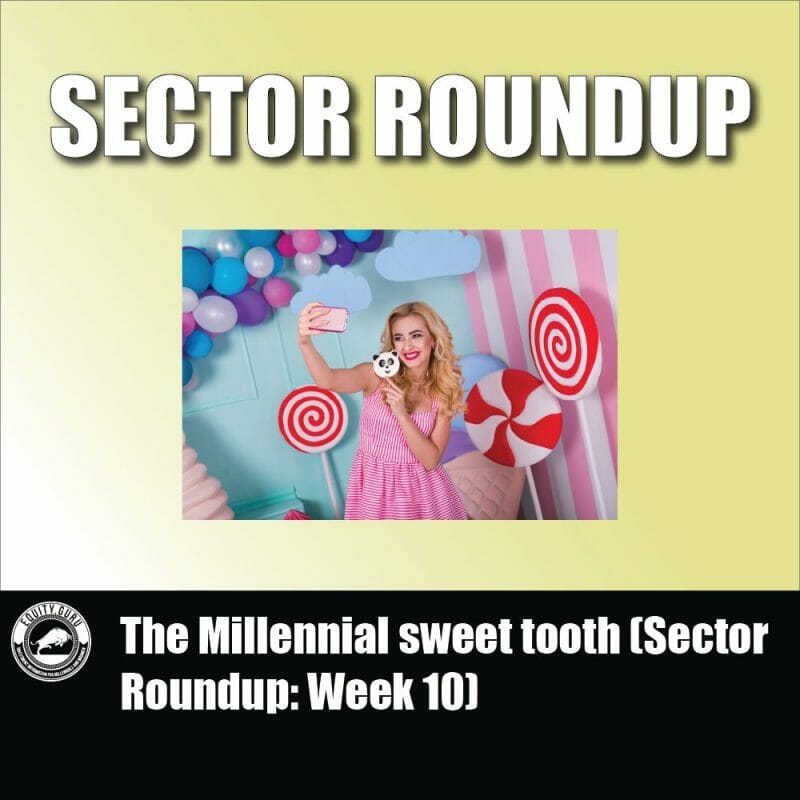 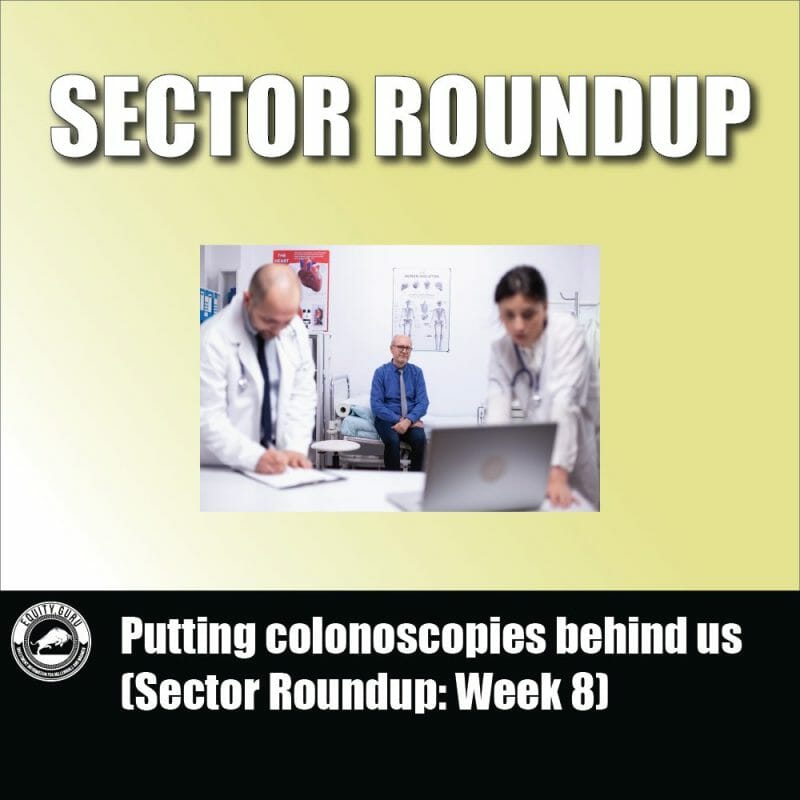 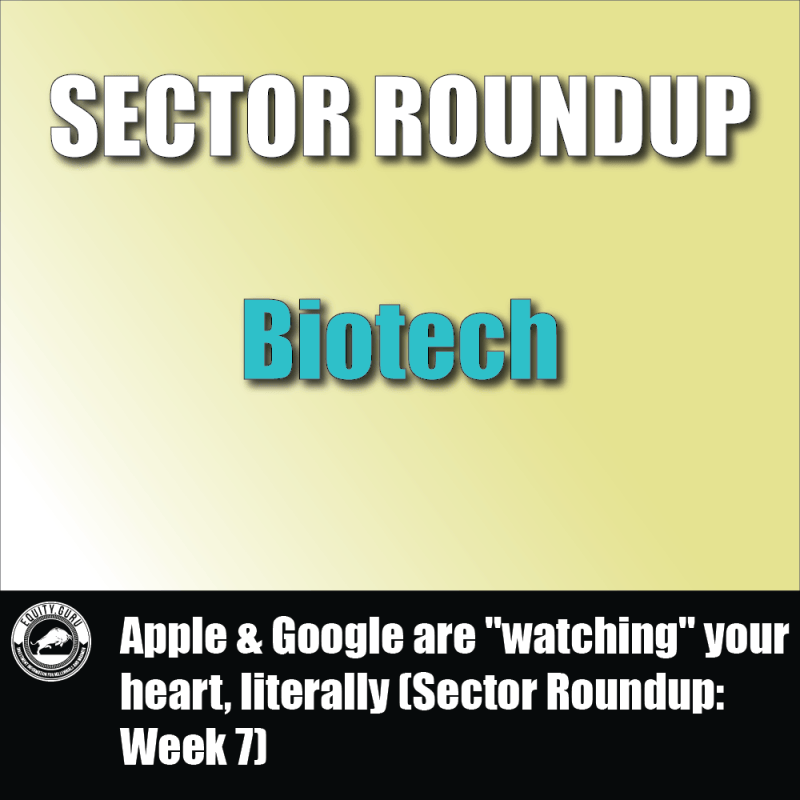 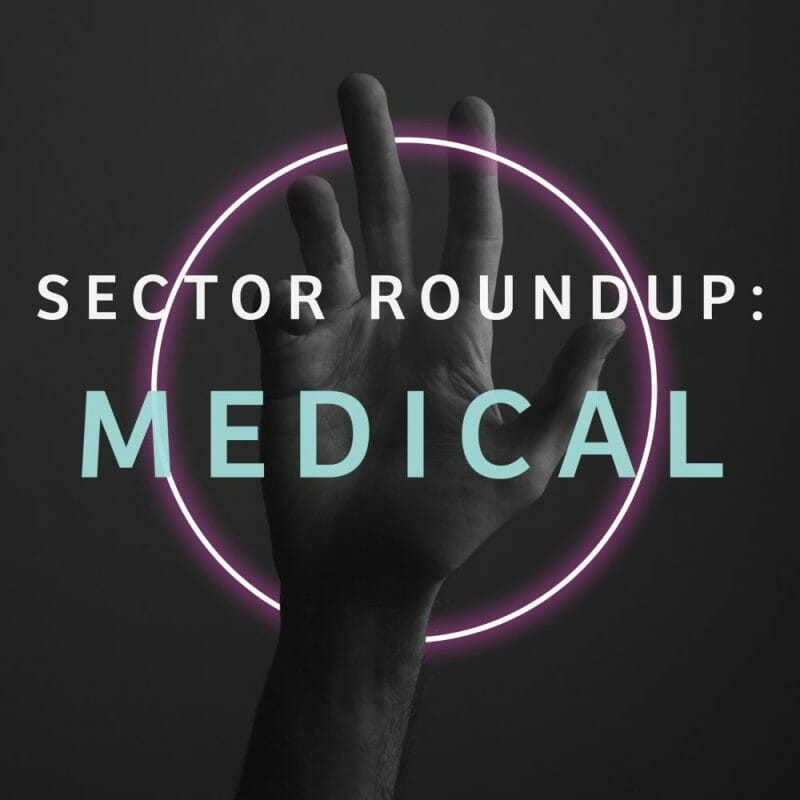